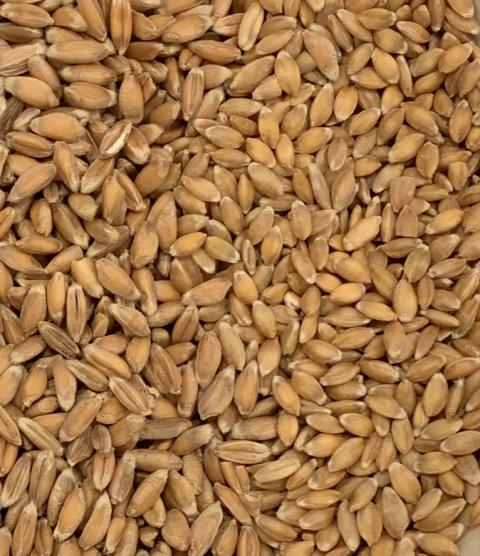 Today's bake is another using my sour raisin yeast water as the predominant leavening.  I also added in a bit of starter at the final mix because the RYW poolish seemed a little sluggish.  This was also an overnight cold retard during bulk.  I've made this once before at 30% whole grain, so I bumped it up to 40% for today.  I think I could go up to 50% and get similar results, but not using the cold retard (or I would have to go into cold retard sooner).  The dough looked good after the cold retard and during shaping, but it was starting to lose steam and dough strength by the end of final proof.  The dough looked like it wanted to really spread, so I scored it cross loaf instead of lengthwise.  I've found the straps from the cross loaf help keep the loaf from spreading too much when it's on the edge of being over-proofed.

1)   Combine Emmer, Einkorn, and Final Dough Water about 45 minutes before Final Mix.  Let autolyse on the counter in covered bowl.
2)   Combine poolish, white flours, starter, and remaining raisin yeast water and mix until flour is just wetted.  Let rest on counter in covered bowl for 15 minutes.
3)    Add autolysed whole grain dough to the final dough and mix by pinching until well mixed.  Mix by pinching only and do not do any stretching or folding if you can avoid it to minimize gluten development.  Similar to Forkish's Pincher Method but without the folding.
4)   One set of bowl kneading with 24-32 folds (I did 28 with this loaf).  Slowly add the salt during the first 4-6 folds.  Let rest for 10 minutes.
5)   Two more sets of bowl kneading (12-16 folds) with 10 minute rest between sets.
6)   Place dough in oiled bowl and bulk ferment at 78 deg F.  Bowl stretch and folds every 30-45 minutes.
7)   Do a final bowl stretch and fold and move to cold retard when the dough is starting to get puffy and has increased roughly 25-30% in volume.
8)   Remove dough from refrigerator and let warm on the counter.  Fold the dough after 30 minutes to help equal out the temperature.
9)   Shape after 1 hour and proof at 78 deg F
10)  Preheat the oven at 465 deg F.  Steam oven when the dough is loaded.  Bake at 465 deg F for 1 minute, 400 deg F for 19 minutes.  Vent the oven and increase temperature to 425 deg F.  Bake for 10-20 minutes longer until you have a hollow thump.

Mixing the doughs before adding salt 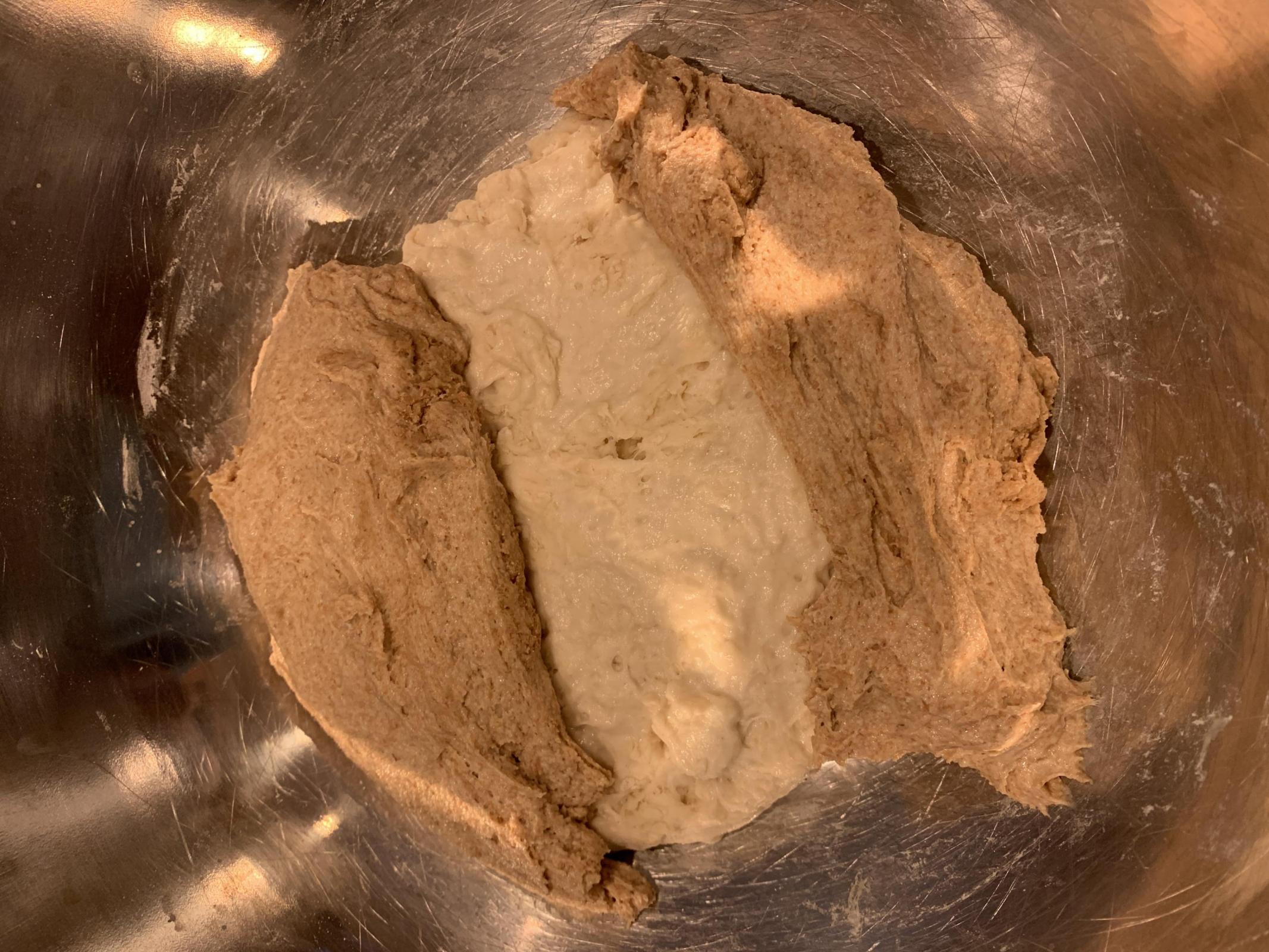 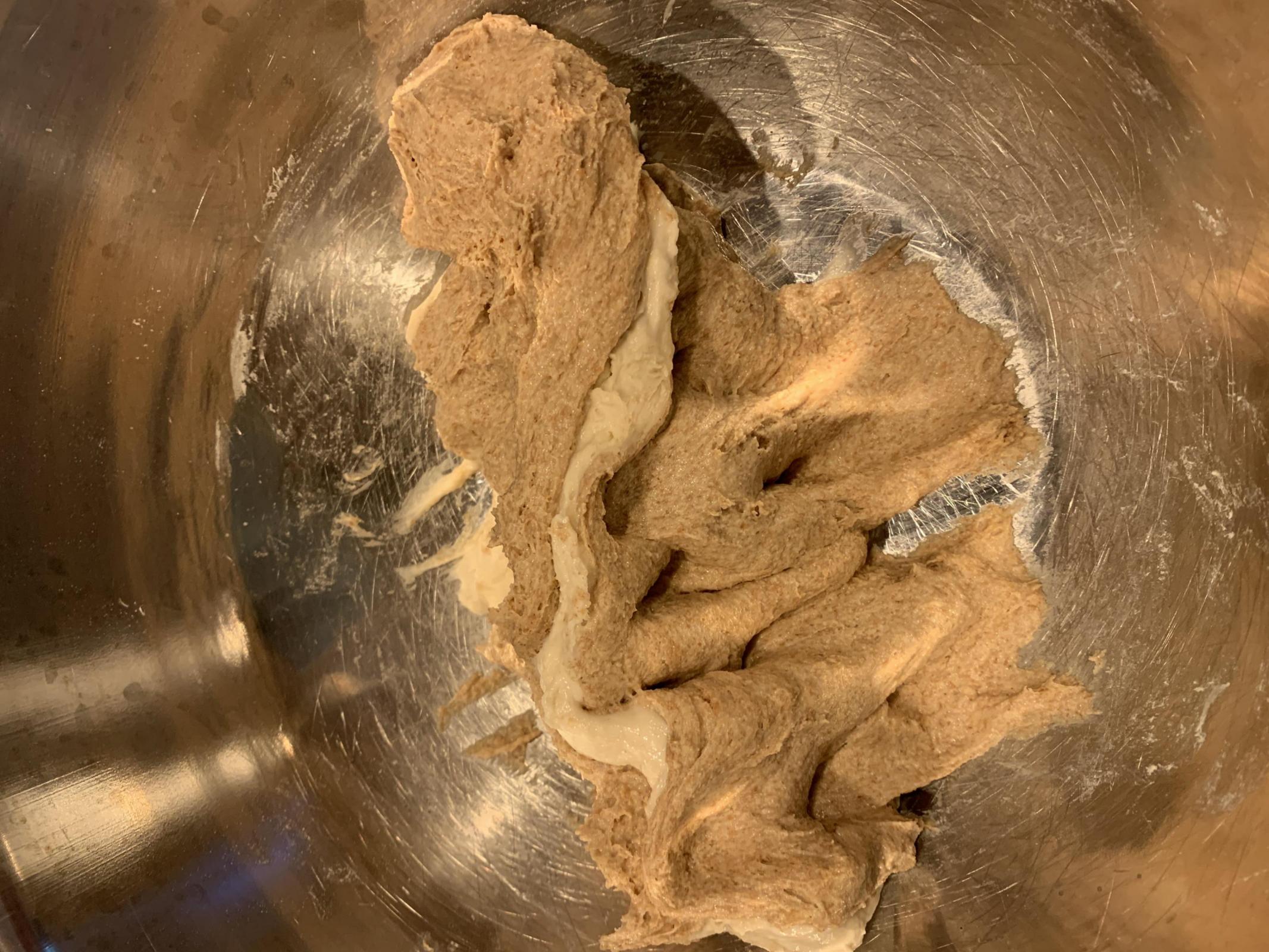 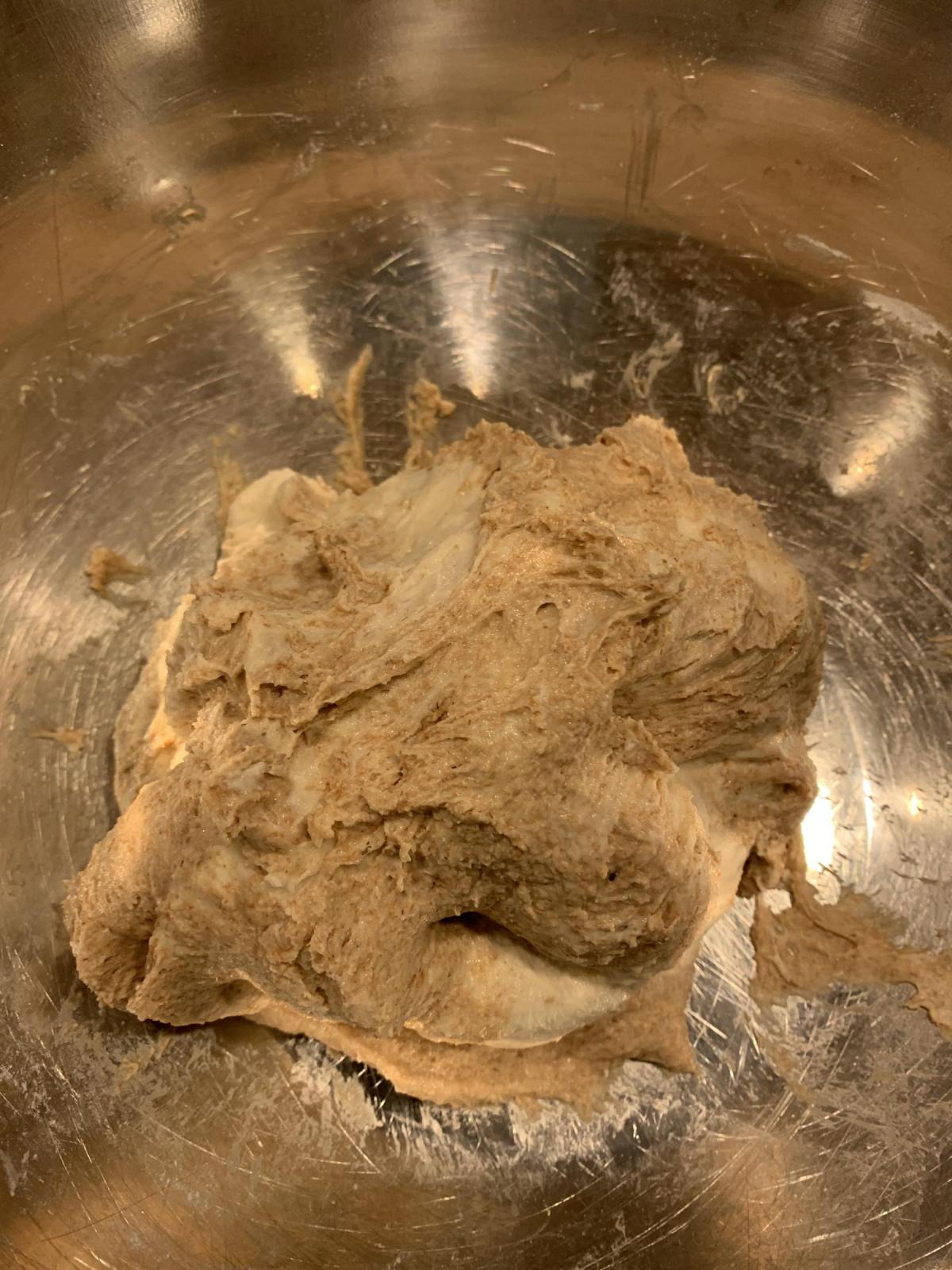 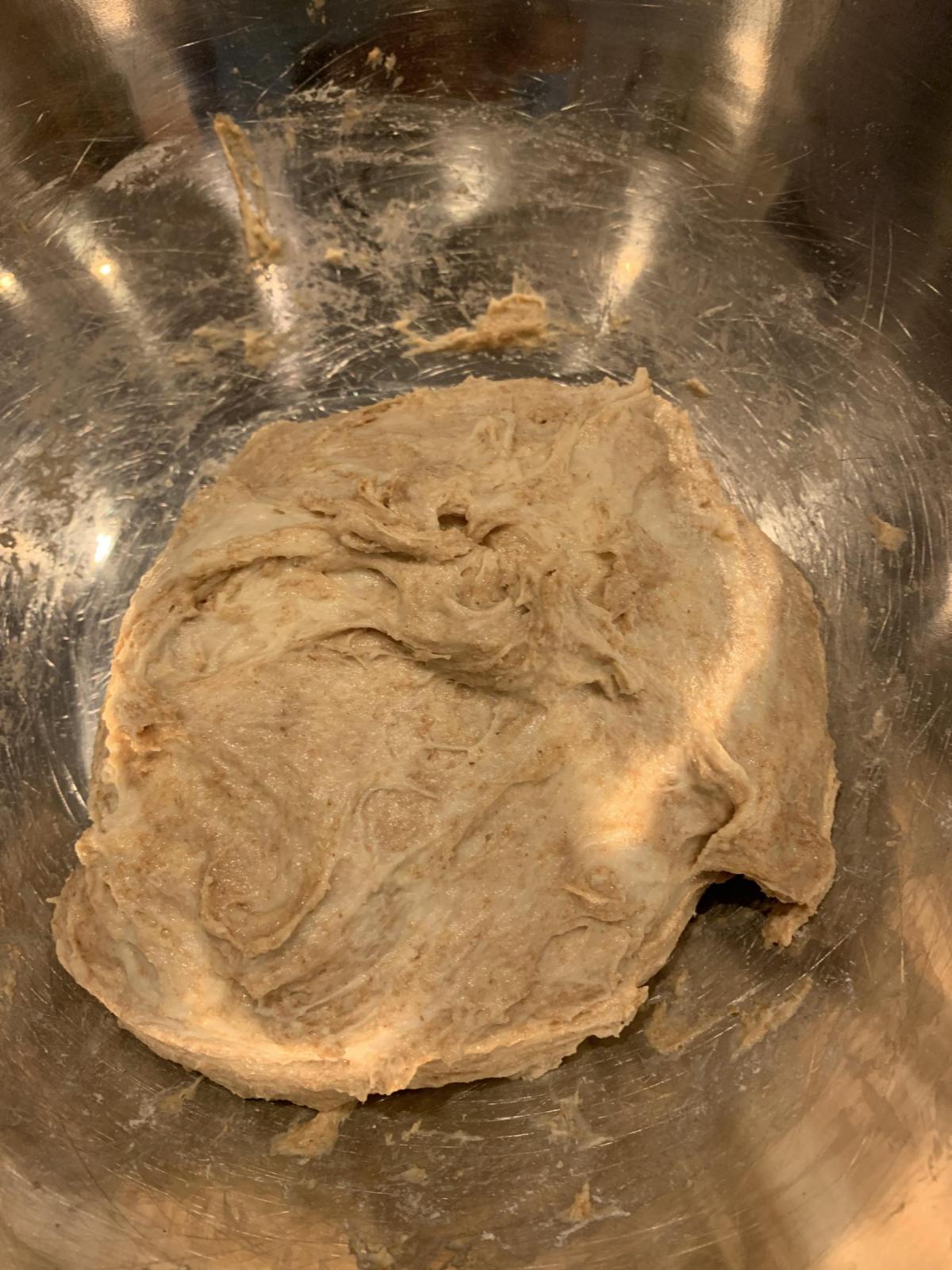 Dough after third round of bowl kneading 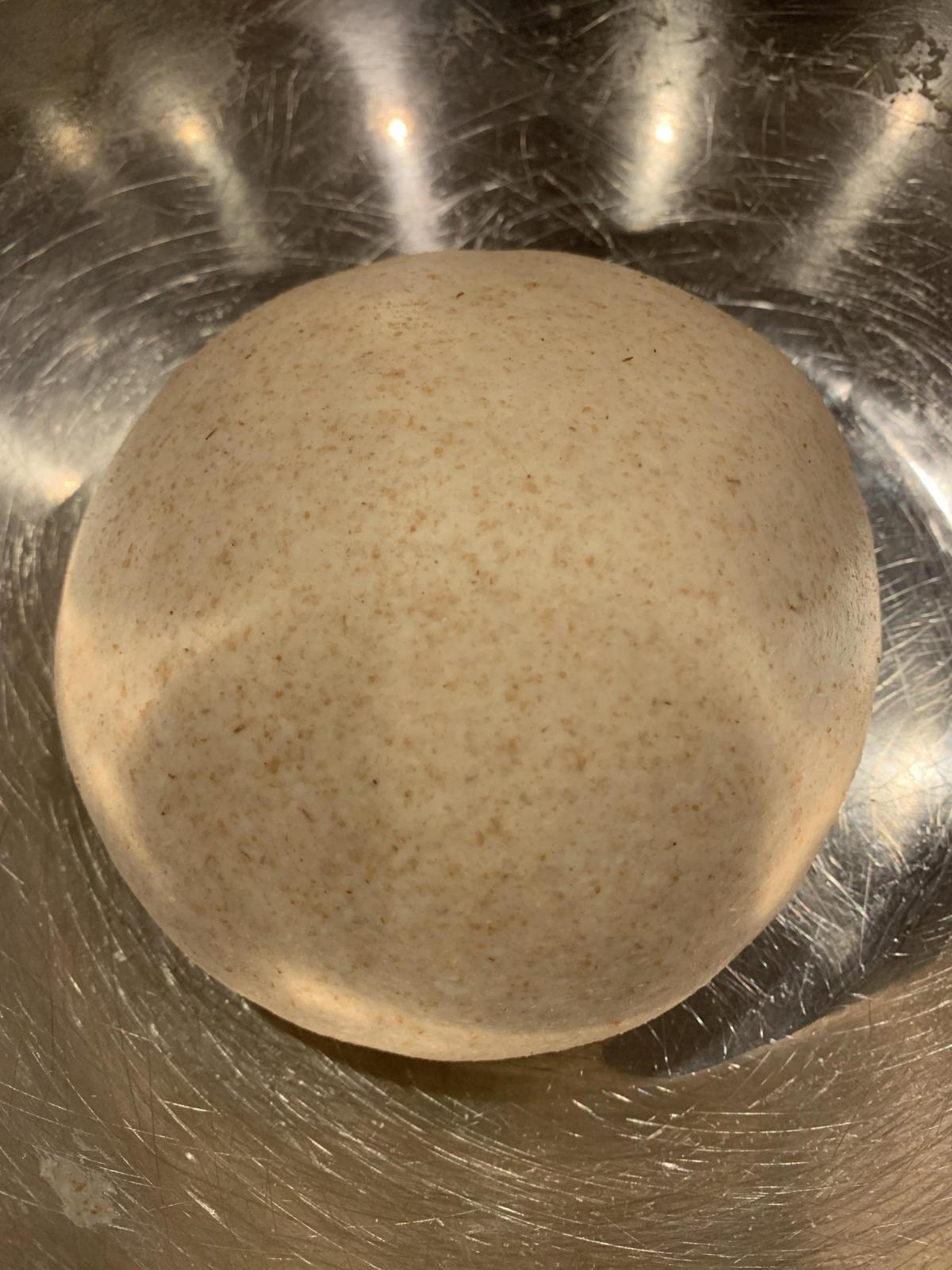 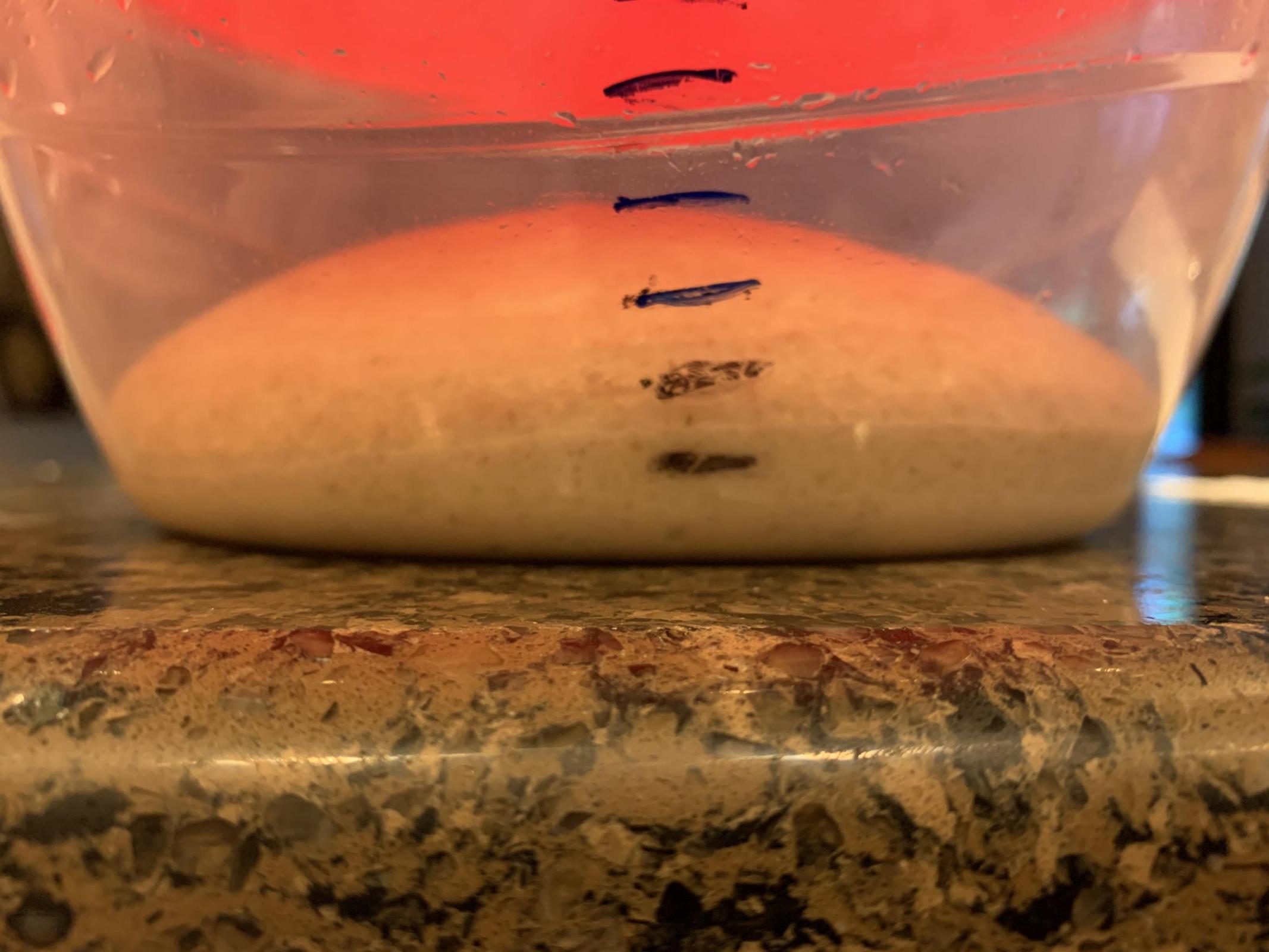 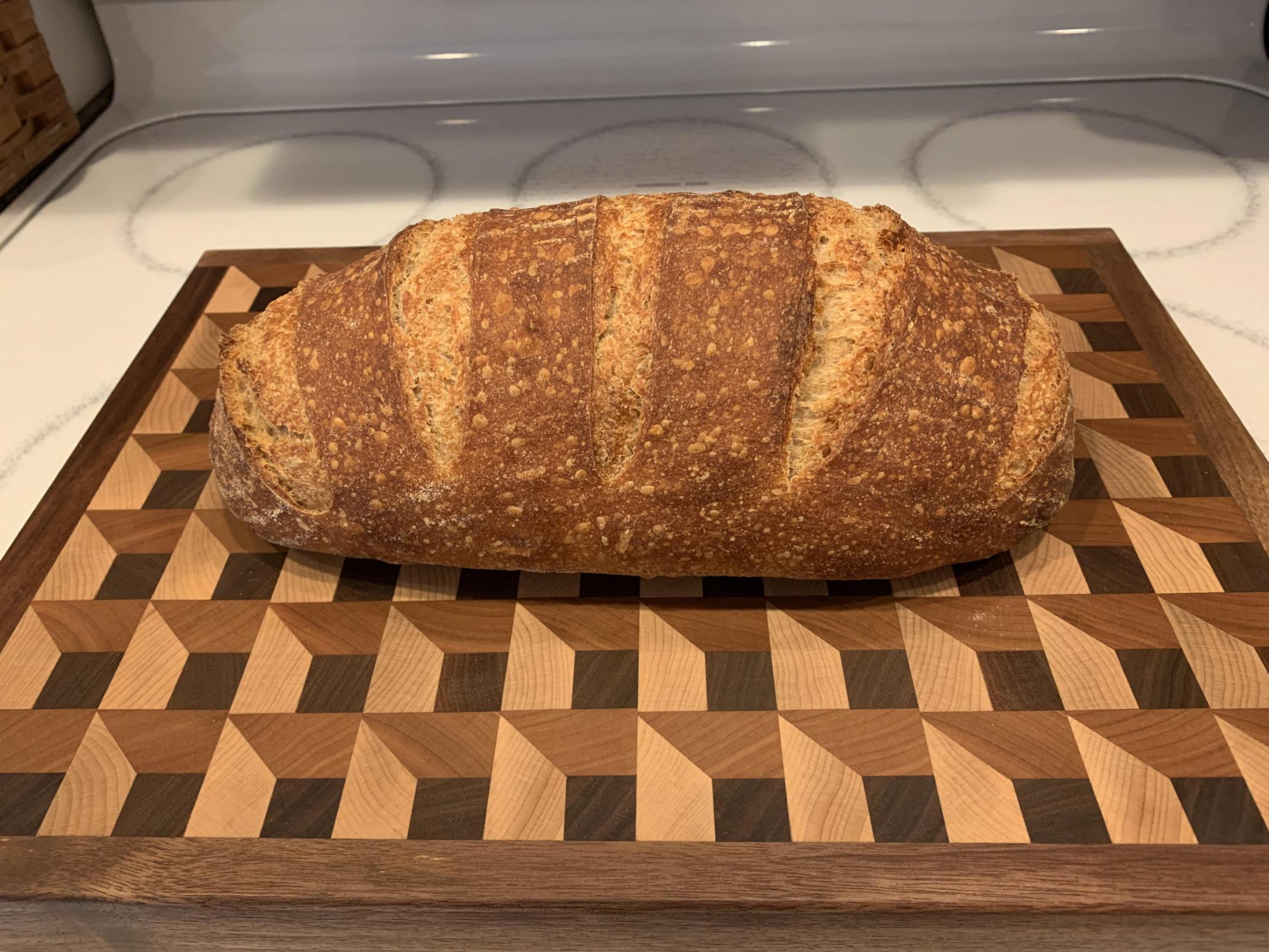 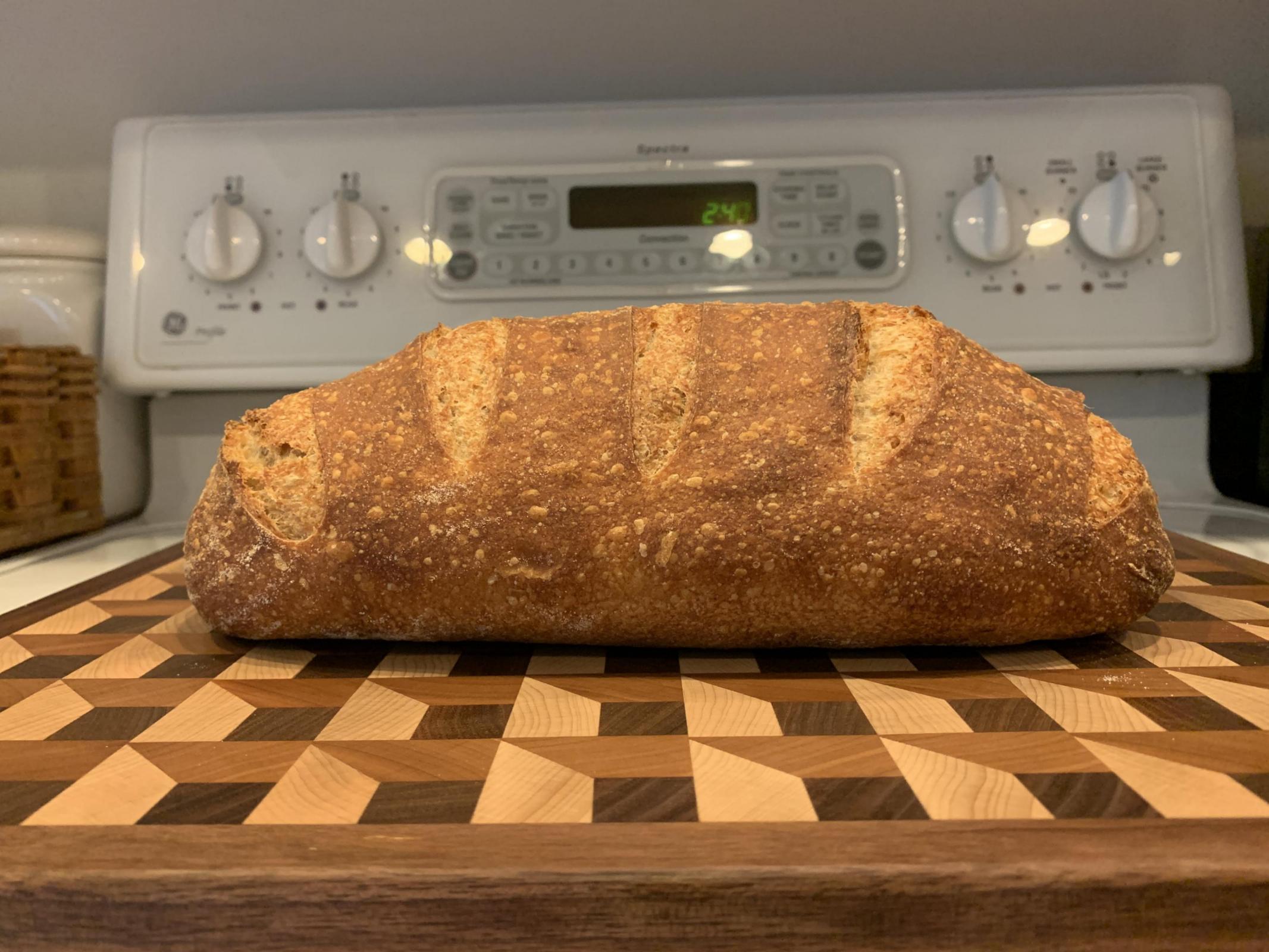 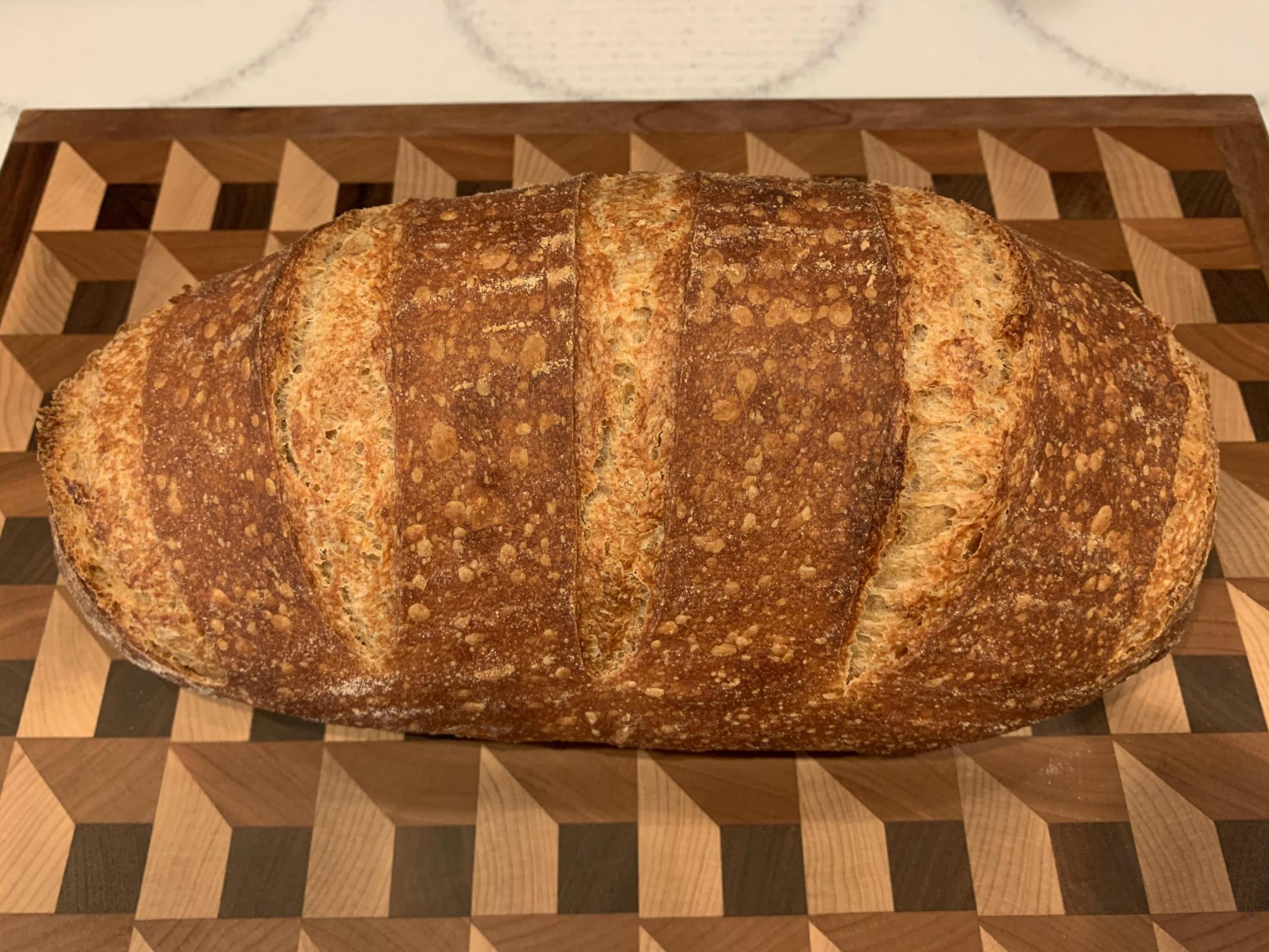 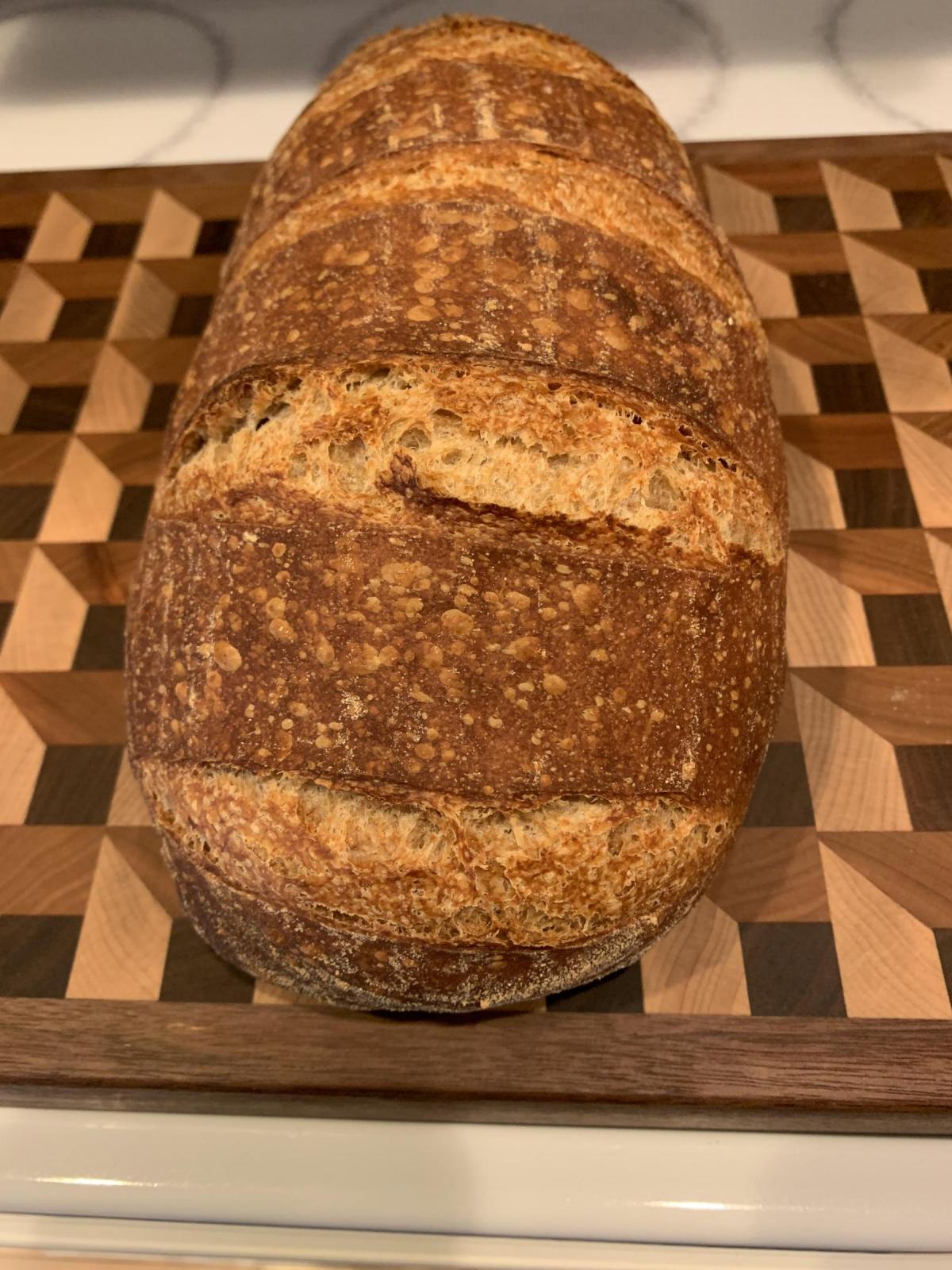 Will slice it tomorrow.  Smells great!

A few bakes ago, I was asked how I shape.  I use a mix and match of things I've picked up from watching various videos, so I couldn't really answer.  @Gary, here's the video I promised you.  Needless to say, the camera man has to work on his technique!

I basically shape to a triangle, put tension into the dough with my thumbs as I roll, tuck the ends under, and then give it a twist to help seal the seam.

Very nice blisters you’re able to get this that much whole grain Troy.  Always interesting to see how other bakers shape, you are much more thorough with patting down than I am.  I also don’t tend to pat down the dough until I have folded it and there is a bit of flour on the dough. Can’t argue with the results that you’re getting!

Thanks Benny.  I patted this one a little more than normal after our discussion about irregular shaped gas bubbles likely being shaping errors and trapped gases.  Tried to degas a little more thoroughly.  Probably not the best loaf to experiment with that because the whole grain should give a more closed crumb anyway, but I'm curious to see how this one looks when I slice it.

Overall happy with how this turned out.  The aroma is great!

It turned out just a little more dense than I’d hoped.  Not sure if it’s from the sluggish YW, the extra patting down during shaping, or all of the above.  Next time, I’ll make sure the YW is good and active and go from there. 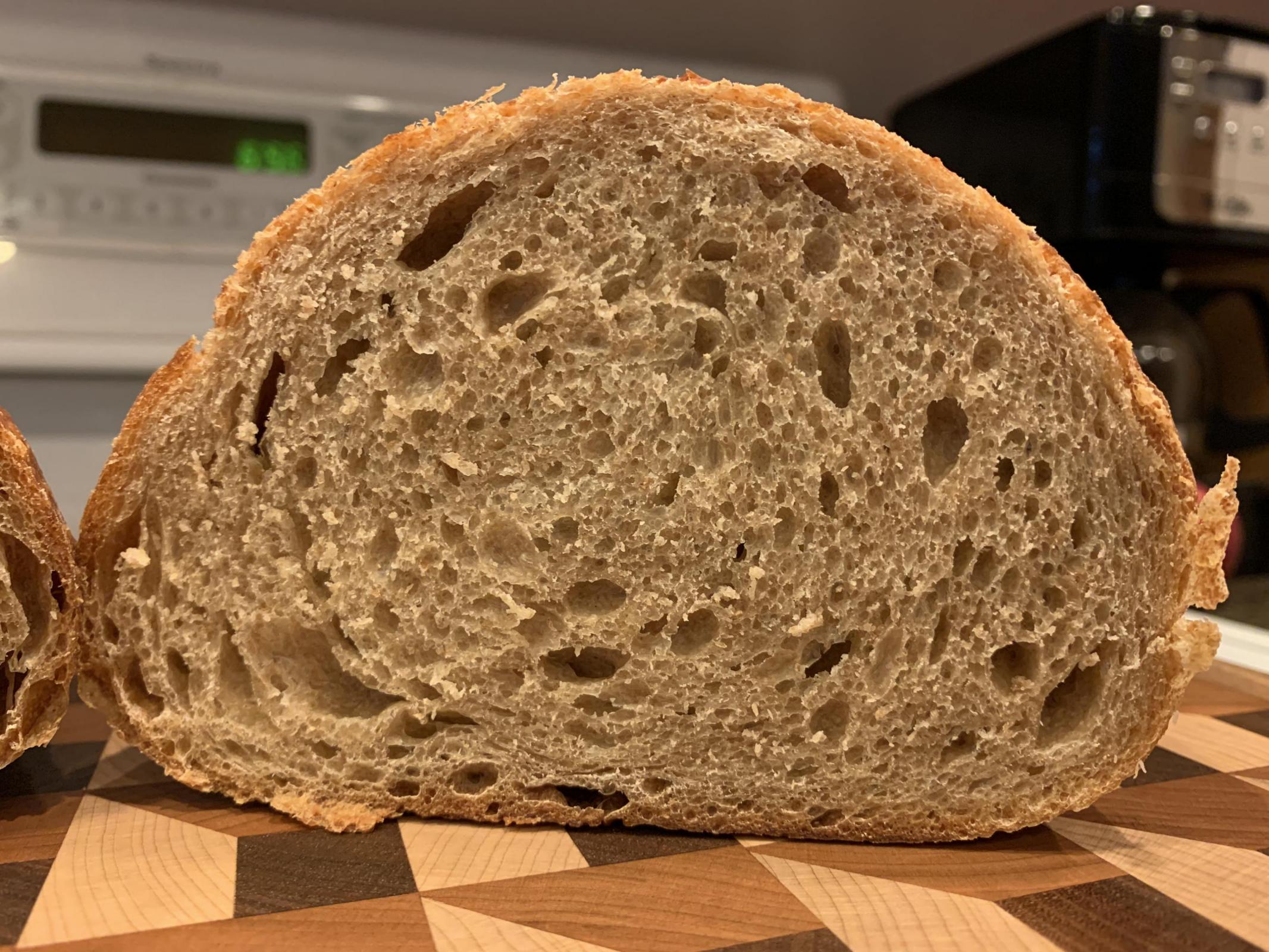 Well the patting down really evened out the crumb, there are no pockets of trapped air.  Nice bake Troy despite you sluggish yeast water it still looks great.

Just made a turkey sandwich with it and it’s surprisingly good as a sandwich bread despite being a little denser than I wanted.  It’s moist and soft with just a little bit of chew.

Wow!  Great crumb on these, and love those blisters!  I've never run across Black Emmer before.

I get the Black Emmer from Janie’s Mill.  I’m not sure if there’s any difference between Black Emmer and Emmer.

I can’t really answer your question on YW in the loaf vs. only the levain.  The downside side of experimenting a lot is that it’s hard to keep loaf to loaf variations straight.  I can tell you the logic behind it (right or wrong) is to make sure the final dough has enough leavening power.  Sometimes my YW is a little sluggish out of the fridge.  I let it warm up but don’t always get it back to good and active.  So, I used the extra YW in the final dough to get any bit of native yeast into the dough that I could.  If the levain looked really good and active, I don’t think you’d notice much difference if the final dough water was plain water or YW.