I got a bag of Rouge de Bourdeaux (85% extraction) flour from Dayspring Farms recently and have been wanting to test out the flavor of it.  Here's a quick write up of my first go-rounds with it.

My first attempt was a purist attempt to get an unclouded sense of the flour:

I was anticipating doing 85% hydration, thinking that a whole(er) wheat flour should be able to handle that.  I added all but 5% of the water, with the intention of adding the remainder with the salt.  But it became apparent that even at 80% I was bordering on more water than the flour could handle.  While it would feel like I was developing gluten doing stretch and folds, the dough would never hold shape.  I was able to somewhat shape it and do a cold proof, which made it somewhat possible to get the dough into the dutch oven with some structure.  Surprisingly, it baked up ok, with a decent (very wet) crumb.  Pretty good flavor, no bitterness. 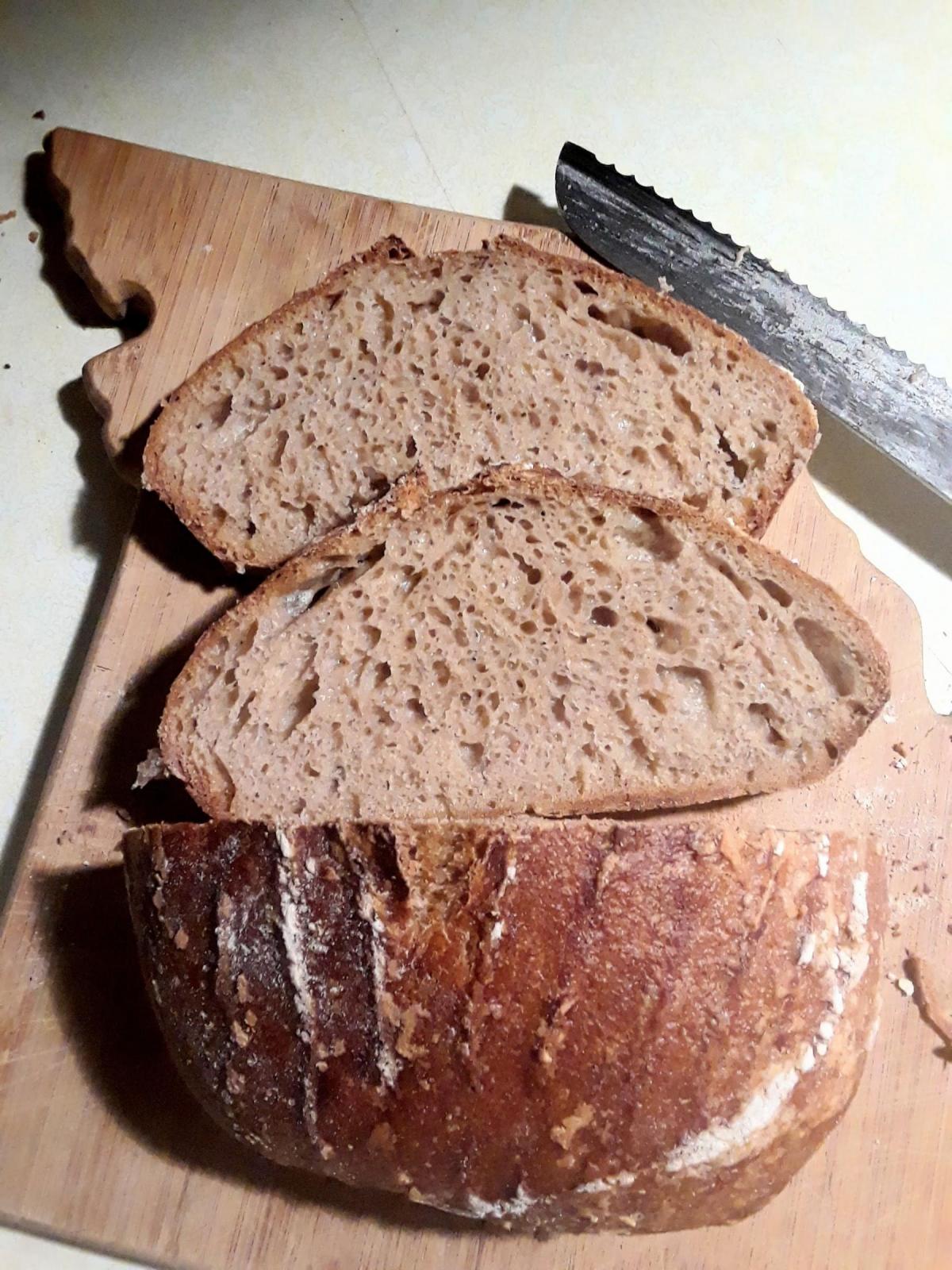 Round 2 involved taking a Tartine No. 3 recipe for Wheat-Rye loaf with coriander and carraway.

Standard process.  Despite higher hydration, dough was much more manageable.  I expected a better crumb based on the feel of the dough as it developed, but the final bread was a little lackluster- a little dry.  Crumb not especially open, nor especially chewy.  Flavor pretty good.  The seeds are a nice flavor without being overpowering.   Weird note- partway through baking, I think sometime after I dropped the temp down to 450, I ran out of propane and had to switch out tanks.  While that should have been after the critical oven-spring period and not affected it too much, it probably had some less-than-ideal impact. 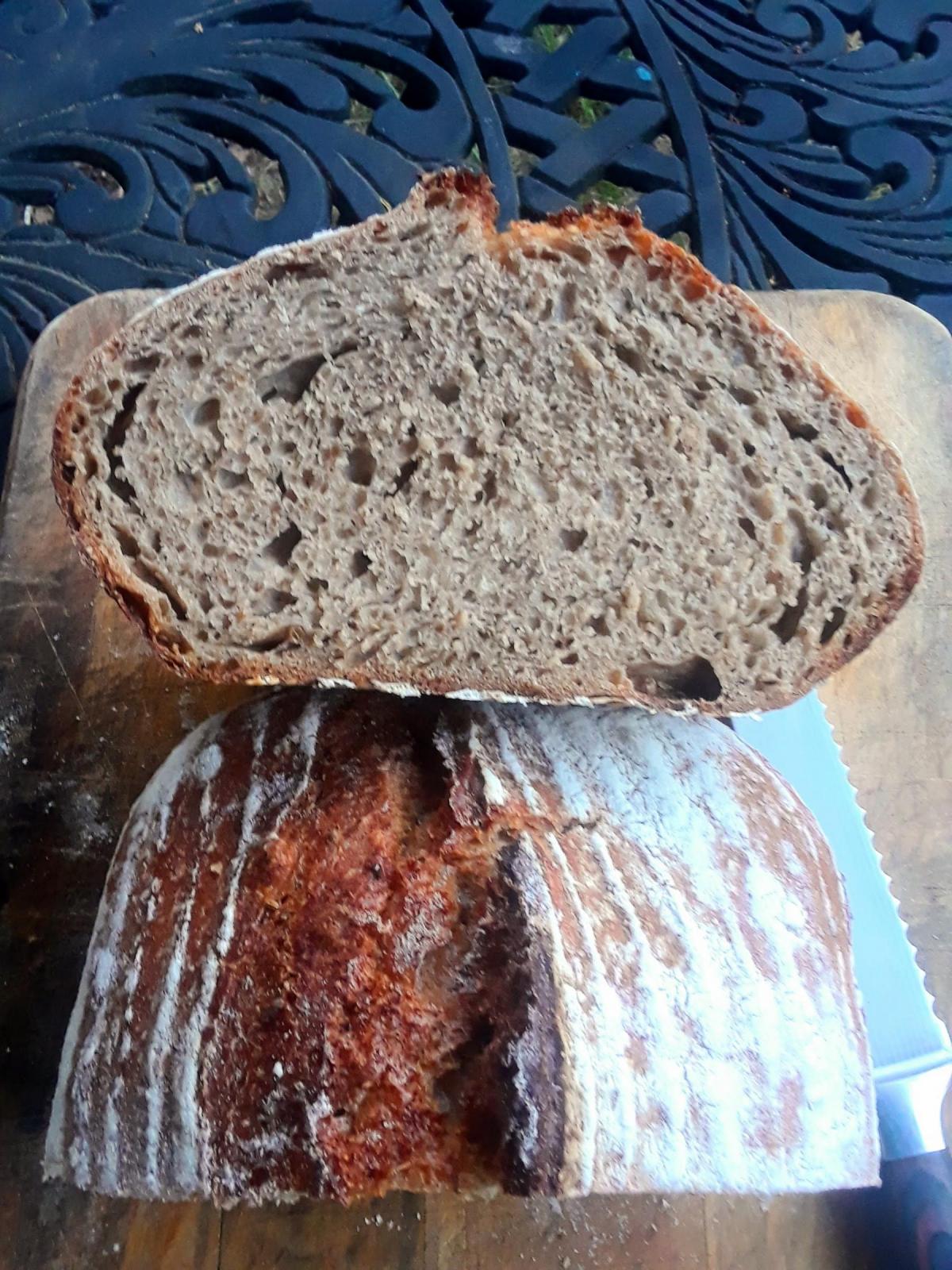 All in all, I'm not super excited by this flour.  Maybe I just need to feel it out more.  Maybe going back to a more standard bread flour heavy loaf might provide a good comparison point.

They are great bakes John especially since you were using a new to you flour, nicely done.

Great looking bakes IMO, given the percentages of WW flour especially.  I'm glad you posted about this flour.  I was also excited to try some Rouge de Bordeaux flour some time last year (I think last summer?) based on the description and comments on the Breadtopia website.  My experiences were the same as yours...meh.  After trying it in two loaves, I ended up using it in small quantities any time I just needed some WW to act as a fill in, until I used it up. I've gotten much more flavor out of spelt, kamut and Red Fife than with this flour.  I did not order any more of it, but thought it was just me (or my process, which seems similar to yours) or that I was missing something.  It's always fun to experiment with new flours, but can be disappointing at times too if we don't end up with that wow factor.  But, all part of the process!  Maybe there are different types of bakes this flour is good for?  Hoping other TFLers that have used it will chime in, or if you continue to experiment that you will keep us updated.

It has been a good lesson in prudence- I was excited to try it and about to order a bulk size bag but I wasn't able to pick up on farm that day and so opted for a smaller order by mail.  I'm glad I did now because, like you mention, there are more interesting flavors from other grains.  Iys always fun yo experiment though, and, in farming as well as baking,I like exploring specific cultivars just to appreciate variety and traditions tied to those varieties. I wonder if it might be good in pastry and applications with its milder flavor and (seemingly) lower gluten and softer texture.

These are lovely looking breads and I'll bet the eating is good, too. My experience with RdB was a little different than yours and Leigh's; however, I sourced my berries from Barton Spring Mill in 2020. I thought it performed well and tasted great, but sometimes there is a notable difference in the same varietal depending on the crop or growing season. Anyway, nice bake!

Thank you for giving some additional perspective on the RdB.  I imagine there is a good bit of room for variation indeed, especially with milling.  I was wondering if the flour being freshly milled might be a factor.  I assume if you're buying whole berries you mill your own- did you make adjustments to hydration or process on account of that?

Hi John. I checked my production notes for one bread that I specifically recall making with the Barton Springs Mill RdB, and my notes indicate that I cut the hydration about 6%, from the specified 88% to about 82%. The notes state that the dough was very loose and I wouldn't have used so much water except that I was trying to prevent dryness in the final baked loaf, which I had apparently experienced in a previous bake. Now, this was a 100% home-ground WW pan loaf leavened with IDY so its quite a different animal from what you are making. Based on what I wrote, I'm positive I wouldn't have gone as high as 82% for a hearth loaf.

As to whether I use a different process for high-percentage home milled wheat breads, the answer is yes. My process was adapted from this informative post by idaveindy. I'm sure my process isn't exactly the same as Dave's, but I think I got the gist of it right and it has been very useful in helping me get the hydration right and in regulating the rate of fermentation, which as you probably know can run amok with home milled grains. Basically, I only autolyse the home milled flour (omit white flour from the autolyse to keep it from soaking up the water before the slower-absorbing whole grains get to it) and limit the autolyse to a modest 45-75 minutes. I start at the low end of that range for unfamiliar flours. Finally, I withhold about 10-15% of the water when mixing the autolyse and do not add any of the withheld water until after the autolysing dough becomes extensible. I usually just proceed with the final mix at that point though and decide how much of the withheld water to add in at that point. Sometimes I don't have to add any of the withheld water, sometimes I need to add all or part of it and sometimes I need to all of it plus a little more. If experience shows that a particular flour is very enzymatic, I have been known to add some salt to the autolyse. Keep in mind that I don't do all of this every time, only once or twice until I dial in what's required for a new batch of berries. I hope this is helpful.

Thanks for looking back on your notes and sharing all this.  I have not really experimented any with home milling as I don't have a grain mill, but it seems that when buying flour from smaller, local grain growers/millers there's a bit more variation in how flours are milled and/or respond that seems to require a bit of troubleshooting in a similar vein, so this is all very helpful to read through.

I mill it myself and buy the berries from Barton Mills.  I usually mix it with either some AP or other fresh milled flours and have had excellent results.

I do sift and remill myself but fresh flour is still more flavorful hands down than premilled.