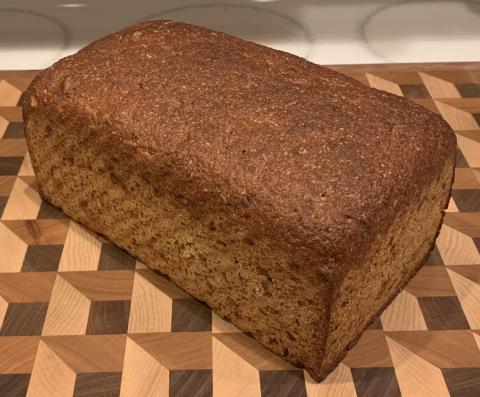 My parents are visiting this week, and my mom likes rye bread.  I made this once before with good success using a LAS.  I've been able to keep my "sour" raisin yeast water going and refreshed so I decided to make this loaf using that instead of the LAS.  The concept being the sour yeast water provides the leavening and acidity that a rye needs without using a traditional sourdough starter.  Similar concept to a LAS without having to take 2-3 days to make one.  The method uses a 2 stage levain build with the rye followed by a final proof after the spelt and soaker is mixed in. The 1st levain build is at 120% hydration to promote microbial activity.  The 2nd build is at 80% hydration (brings total down to 100% hydration).

Really happy with how this turned out!  Bread has a reasonably open crumb and has noticeable chocolate overtones, which I find ironic considering there is no sugar or cocao in the formula.

1)   Combine ingredients for Levain 1 and ferment for 8-9 hours at 80-82 deg F.  Watch for the islands described here.
2)   Combine all of Levain 1 with ingredients for Levain 2 and ferment for 3-4 hours at 80-82 deg F.  Watch for the islands.
3)   At least 1 hour before final mix, prepare the soaker by toasting pumpkin seeds until lightly browned (I used frying pan on medium heat for 5-10 minutes) and combining flaxseed with boiling water in a covered bowl. After 15-20 minutes, stir toasted pumpkin seeds into the flaxseed soaker and re-cover to maintain moisture.
4)   Once Levain 2 is ripe, stir in spelt flour, soaker, salt, and final dough water.  (I used my hands with food service gloves to minimize sticking)
5)   Add bassinage water 10g at a time squeeze/fold the water into the dough.  Once incorporated, perform bowl folding/kneading until it is absorbed by the flour.
6)   Repeat step 5 until the dough gets mildly sticky when folding/kneading.  The dough should be soft and pliable.  It should not be a stiff cookie dough consistency.  Add more water if too stiff.
7)   When desired consistency is met, gently press dough into a greased bread pan and flatten top with moist hand (or spatula).
8)   Final proof at 80-82 deg F until the first pin holes are seen (Final proof for this loaf was about 3 hours).
9)   Preheat oven to 460 deg for 1 hour.  Place pan on middle oven rack with steam.
10) Bake at 460 deg (1 min); 400 deg (19 min); vent oven; 400 deg (10 min); remove loaf from pan and place directly on rack; bake 375 (5-10 minutes)
11)  Internal temp above 205 deg. 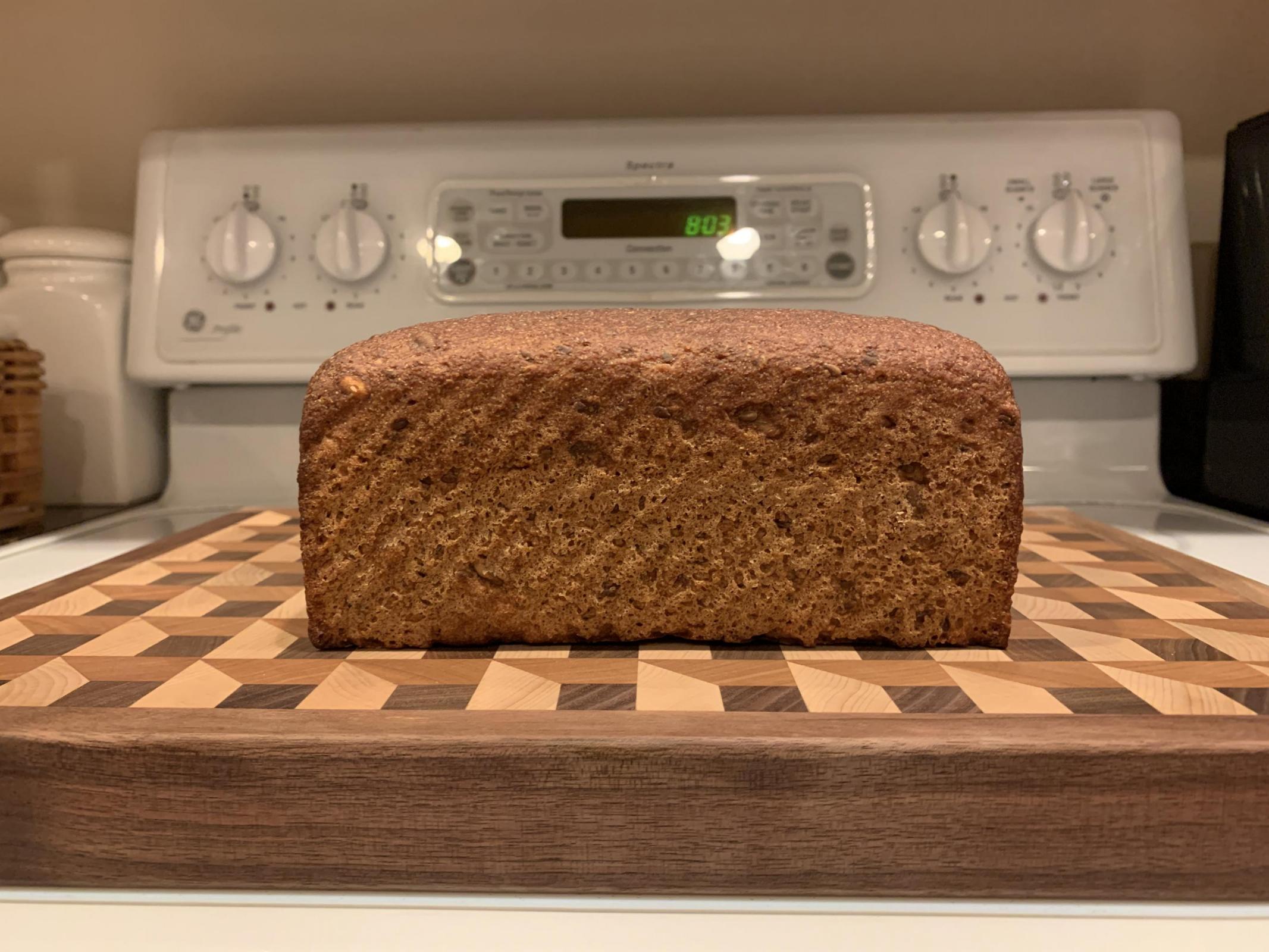 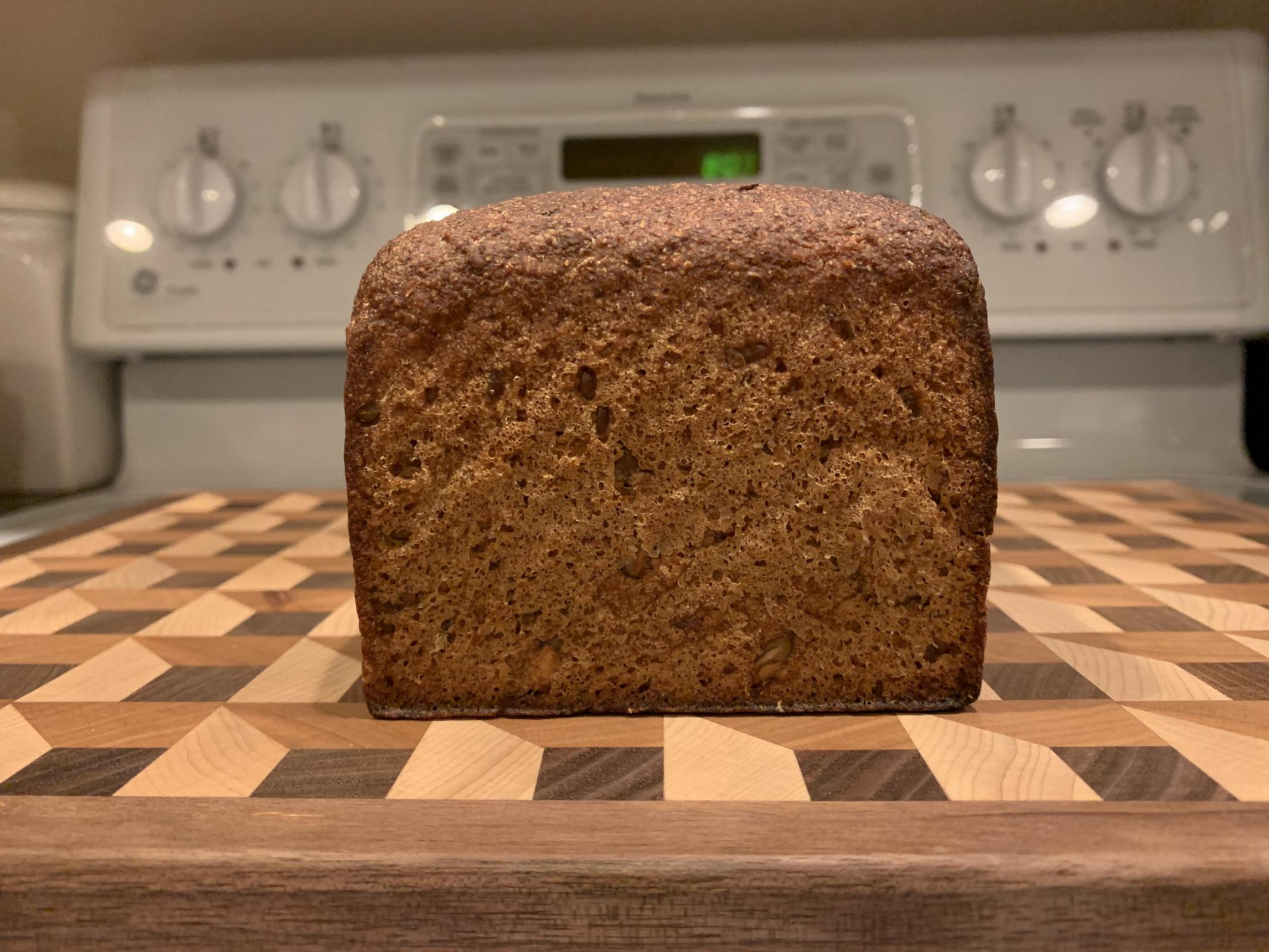 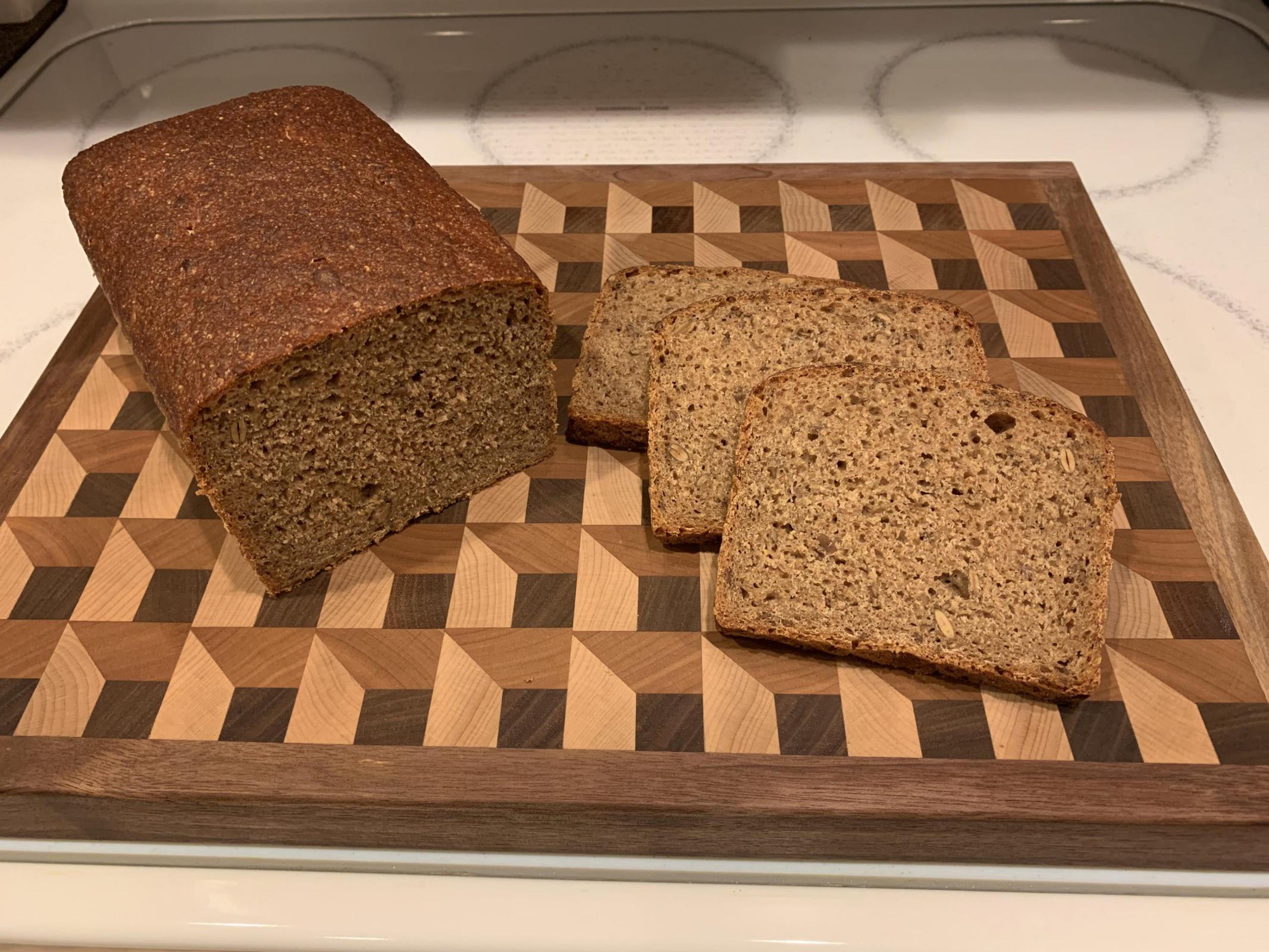 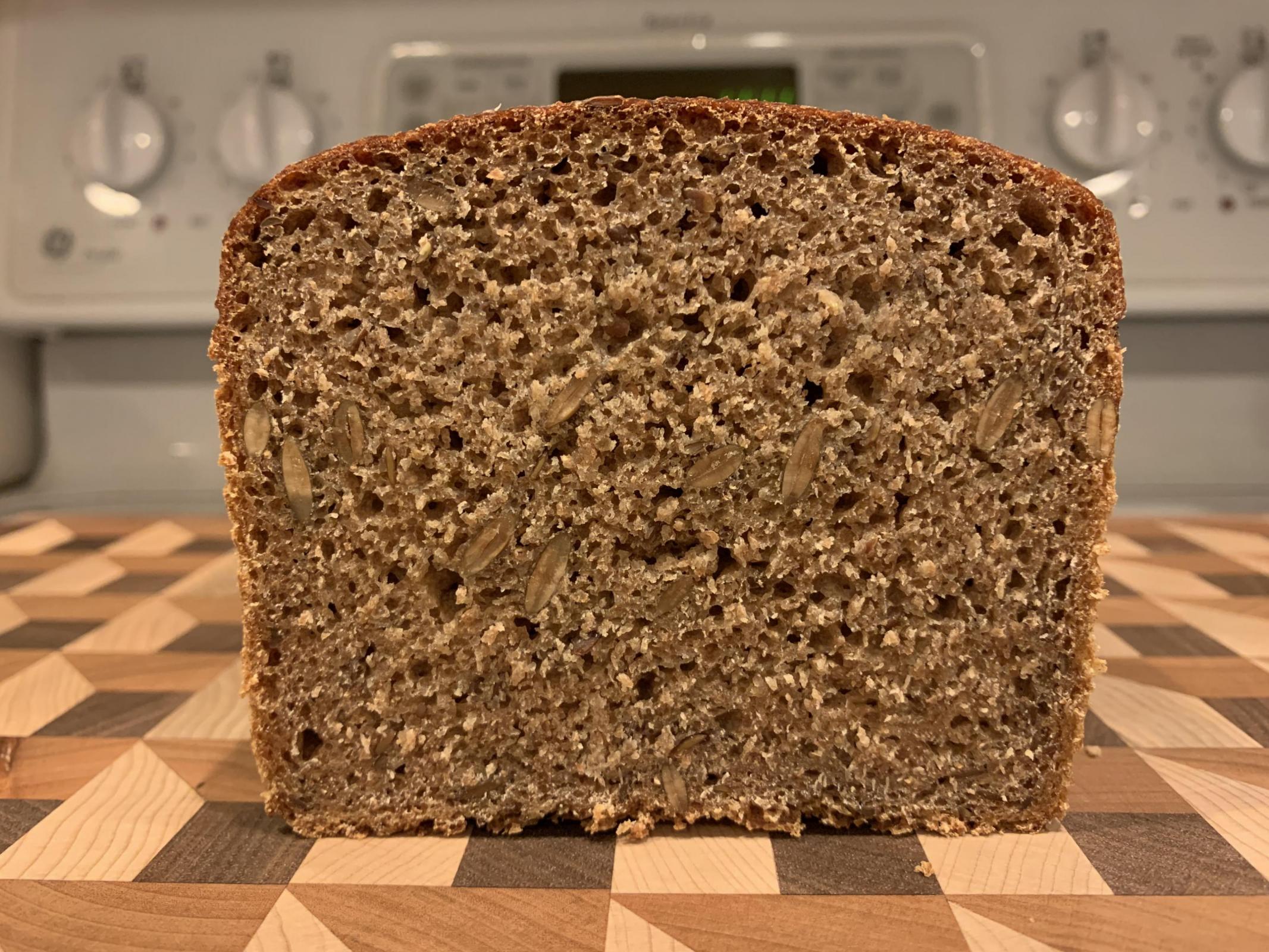 Thanks Gavin!  I've used this flour combination and ratio twice now, and I must say, I do like it a lot.  I haven't figured out where the chocolate is coming from but it was a big surprise!  May need to make it without the soaker to see if it's coming from that or the rye/spelt combination.

I stumbled on the sour yeast water by accident.  My first attempt at yeast water came from a search on Google.  I found a blog post that referred to this method for making yeast water.   It worked quite well with raisins and with blueberries, and I used sea salt as the salt source.  Initially, I used it when I first started in sourdough because I struggled with developing a good starter (I went searching for a yeast water to help boost my sourdough with the thought being sourness from the SD and extra yeast from the YW).  It worked and using the two in conjunction became my typical method.  Used it for quite a while in a lot of my breads, but always in conjunction with sourdough starter.  One day, I decided to try making a levain with just the yeast water.  Just wanted to see the difference...  Was shocked when the levain was noticeably sour and acetic dominant.  So after a long thread with Abe, Caroline, and Jon, I came to the conclusion that it was the raw honey I was using that was supplying the LAB's.  Substantiating that is a recipe in Hamelman's 3rd Edition (Pg. 394) where a bread is fermented with raw honey and sea salt.  For all I know, the yeast water was sour from day 1 and I never recognized it because I always used it with sourdough starter.

My routine when I need to refresh...

I shake the jar that the yeast water is in to stir up the sediment and make everything well mixed.  I then suck 200g of that out with a turkey baster making sure to not get any big raisin or sediment chunks.  I just want the water and any finely dispersed sediment.  To that, I add 700g of spring water, 17-18g of raw honey (locally sourced), 1.8g of sea salt, and about 15-20 organic raisins.  That is fermented for 24 hours at 76-78 deg F.  During that 24 hours, I will pop the cap on the jar to relieve pressure and check for activity.  I'll also open it for 30 seconds to let it breath and then shake it vigorously and once again relieve the pressure and then back into fermentation.  After 24 hours (and assuming I have strong bubbling after a shake), it goes into the refrigerator until I need it.  On levain making day, I pull it out of the fridge, give it a good swirl to stir it up, and let it warm up on the counter top for 1-2 hours.  Once the water is good and cloudy, I draw off what I need for the bake and then put it back in the fridge.

If you wanted to try making one, I would start with a straight raisin yeast water first to get the acidity up (acidity from dissolved CO2 and the raisins.  Not LAB acidity).  Or, start with sugar instead of honey (avoid the botulism concern raised by Abe in the long thread).  Once you have a good, low pH (<4.0) and an active yeast water, do the refresh I described above using locally sourced raw honey (it must be raw honey).  It might take a few refreshes for the LAB population to build.  Or, it might not work at all.  Again, I kind of came upon this by accident.  :-)

Delicious looking loaf Troy.  You continue to have great success with your yeast water bakes!  I’m sure your mother will love this one.  Enjoy their visit.

Thank you Benny!  I'll get the verdict later this morning.  She took a few slices with her over to their campsite.  She wanted to try it as toast for breakfast.

That crumb speaks to me.

Save some for Mini, too. She lurvs rye and spelt.

Thanks Dave.  That combination of flours seems to give it just enough gluten for a decent rise and stable crumb.  I can't remember where I read it (maybe in the Rye Community Bake), but there was a comment that rye can benefit from being a little coarser.  I tried that this time with the Mockmill.  It still had "flour" in it, but also had a lot of beach sand sized chunks too.  Seemed to work, so I'll run with it again the next time I make it.

If you haven't seen it, Steve Petermann did some extensive research on how much room-temp water and how much boiling water can be retained by 19 commonly used bread add-in ingredients.

It's worthy of a bookmark.

That's a beautiful pan loaf! The combination of rye and spelt is something I have not tried yet but your loaf says I should.

By LAS, do you mean a flourless lactic acid starter? I haven't made one of those yet; do you think this could be made with a rye sour culture?

Thanks a bunch!  Full disclosure... My tastes change with the wind, but the rye/spelt combination is in my top 2 or 3 right now.

Yes, I'm referring to the flourless lactic acid starter, and yes, I think this loaf could absolutely be made with a rye sour culture.  I modeled the rye sour portion of the bake after the rye build in dmsnyder's Jewish Sour Rye.  Only difference being I went a little higher in hydration for the first levain build and I did equal amounts of rye flour in both levains instead of increasing it for the second build.  That worked for my sour yeast water (which is fundamentally a flourless lactic acid starter just reached via a different route).  I'm not sure how much rye sour culture to start with...  Enough so that you ripen a 120% hydration build (create "islands") in 8-9 hours at 80 deg F.

Good luck and let me know if you try it!

Toast me up a slice of that! What a good combination of flavors and textures in there. And the crumb and crust are perfect.

Thank you much.  Finished off the last of it yesterday, so it's time for another bake.  :-)