I've really been enjoying the experiments these past few months with adding things into my bread. Olives, Sunflower Seeds, Pumpkin Seeds, Miso ... The list goes on!  As I have explored the bread I have also been exploring this website more and more. One of the recipes that stuck out was this one for Flax and Sunflower Sourdough that was modified from the Tartine 3 book by Danni3ll3. See their ORIGINAL POST HERE and you will see immediately why this was an attractive bake.

I was really impressed with the makeup of this bread. So many different flours bring a punch of flavor to the party. Rye, Whole Wheat, Spelt, and a mixed whole grain flour (I ground emmer, barley, and spelt). Then toasted sunflower seeds and toasted flax.

I was so excited that I didn't document the flax soak but boy does it soak up the water and become a thick sticky mess. However, Danni3ll3 also talks about that in their post and their methods so I was able to overcome that hurdle without a problem. In fact, on the day of mixing the dough poured the water inclusion into the starter and into the flax mixture to loosen it up before adding it to all the flour.

I did encounter one problem however. And this is 100% my fault! I scaled the recipe from 2 loafs of bread to 1....but I didn't look at the total dough weight. The nice round numbers 100g of starter....75 grams of sunflower seeds etc...was just so aesthetically pleasing. I recognized that the mass of dough was larger than normal but what was done...was done. It was mixed and it was a chonk. Such a chonk in fact that while I could get it into the dutch oven I could not actually put on the lid and leave room for the bread to expand at all!  As a last ditch effort I decided to just do a bake on a sheet on a rack in the oven instead.

The oven spring was ok but less than desired and the dough got a little close to the back of the oven and was a lovely shade of black carbon (only about a cm which was cut away and the rest is fine). This loaf doesn't do justice to the beautiful loves that inspired it but it's still delicious bread). I'm confident had I scaled it properly to around 800g it would have turned out to be more pretty, but the flavor is what really matters right? 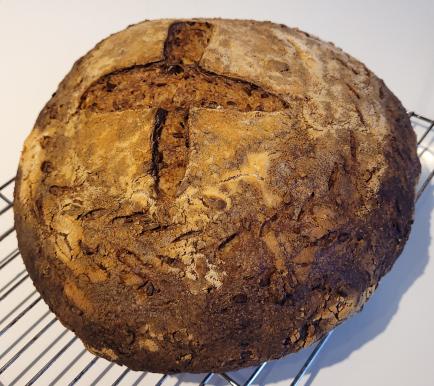 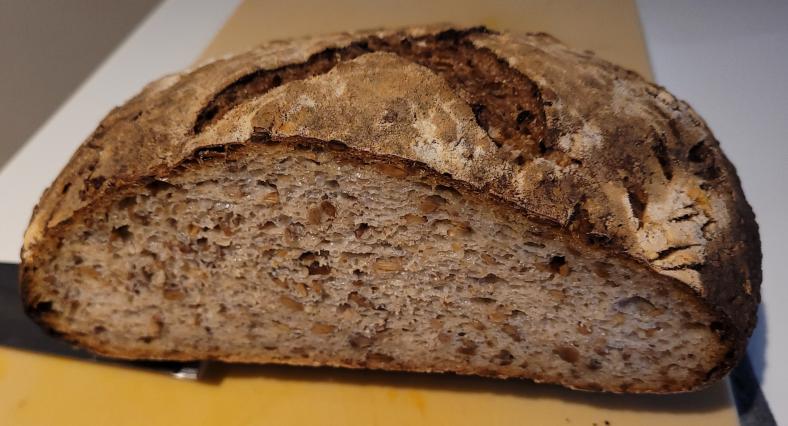 Tasting Notes: The crust is crisp (we will ignore the small section that got burned and pretend that didn't happen) and the crumb is soft. You can also see that the crumb is LOADED with seeds. Surprisingly this only adds a slight nutty taste. There is so much flavor coming from the combination of flour used that the nuts stand up and balance things but aren't a very dominant flavor. It isn't that the flavors are muddled, more that the bread is so complex in flavor that nothing takes a dominant role. Delicious and will be great as toast....and make a KILLER grilled cheese sandwich (Cheese Toasty).

Time/Effort: Three day process starting with a levain build on the morning and evening of day one, mixing and bulk on day 2, and finally baking on day 3. This is my normal sourdough schedule so It's not out of the ordinary for me. Mixing the flax soaker with some of the water for the final dough just before bringing the dough together made incorporation easy. Also doing the same for a correctly measured final starter feeding was helpful.

Would I make it again: Most likely. It was a really good bread and I think will shine for sandwiches for sure. Thanks again to Danni3ll3 for posting about their bake that inspired this one. You can see their blog and bakes by visiting their profile here.

I’m so glad you made this and that you like it. It’s was one of my early bakes. I was looking for something to make this weekend and this is perfect to revisit. Your version looks wonderful!

Looks and sounds delicious Steven, you did Danni’s recipe proud.

I made some mistakes and perhaps baked it too hot at first (my brother's old oven crapped out and this is my first bake in his brand new one) but none of that matters: this is an absolutely stellar bread! 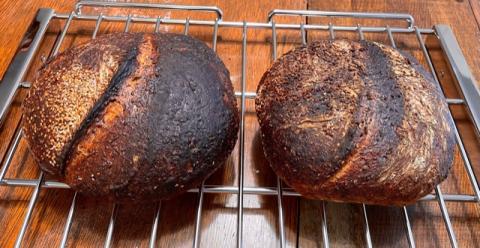 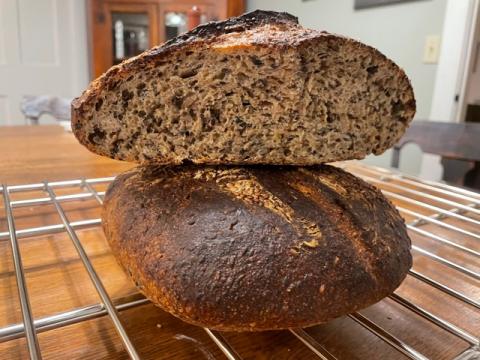 Many many many thanks.

That's great! I'm glad you like the flavor, and while I can't take any credit for it, I am glad to see that we as members of this site can encourage, inspire, and promote one another in such positive ways! Thanks for sharing!