As you can see my light spelt loaves are tilting to one side and splitting at the top. Maybe it’s underproofed? I give the dough one hour to rise and then I shape the loaves and give them another hour to rise. I rotate the loaves every eight minutes in the oven at 380 F for about 35 minutes. This didn’t happen very often but now it’s happening a lot even though I haven’t changed anything I do. Loaves are pretty big. About three cups  of flour per loaf. I do six at a time. 2 1/4 tbsp of dried yeast per batch. Thanks! 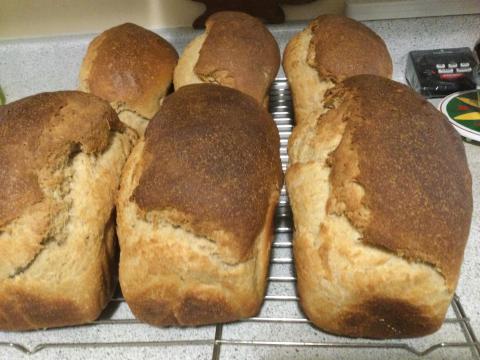 Can we get more details about flour, hydration, whether these are 100% spelt of part spelt?

A one hour rise feels very short. You're using yeast vs a levain I assume? How are you mixing?

Thanks! I am using 100% LIGHT Spelt flour. I am using Bakery Format brand bulk quick rise yeast. I am mixing by hand. The hydration ratio is about 50 per cent. Sweetener (or food for the yeast) is honey. Only other ingredients are water, canola oil and salt. The bread is terrific. This is only a cosmetic issue. I think I will start running slits down the top with a razor to let the oven rise escape without tearing the top away. Oh and I also am kneading by hand (for about 10 minutes). First rise is an hour in the bowl and the second rise is another hour in the pans after loaves are formed. I also use a spray bottle and keep the oven humid. My only other thought is maybe I should let the second rise go beyond one hour. I have not done a "finger test" to check the proofness but will try that.

Spelt, as you likely know, doesn't have the inherent strength of normal wheats and while being in a pan will help with that, I'd make sure it holds its own when you shape to put it in the pans. If it just flattens right out, it likely needs more tension.

I'd also consider not opening the oven every 8 minutes and just let it do it's thing after ~ 15 mins of steam. Or not even worry about steam since you're doing a pan loaf.

Thing 2: The dark lopsided tops also lead me to think you are using convection mode, which is generally always  bad for uncovered bread in a home oven.

General rule of thumb: never use convection mode, nor top heat (upper element) when baking bread in a home oven.

Thank you. Loaves are not usually that dark but I take your point. I may have left them in maybe five minutes too long.  I am NOT using the convection feature. Instead I rotate the loaves every 8 minutes to try to even the heat out. I can up the hydration but I think I am pushing the limit already for this type of flour. It can get unworkable beyond 50-50.

By the way, Welcome to TFL.

What kind of oven are you using?  Is this a regular North-American style home oven with "stove-top burners" where you cook things in pots and pans?  Or is this a counter-top oven with the option to use both upper and lower heating elements?

It’s a Whirlpool regular electric oven that has a convection feature but I don’t use it.

I have a fairly new oven and use convection mode with all my bakes and have no issues whatsoever.  Not sure why you are recommending not to use as it’s not correct in my case.

That's great that you have the right oven controls, settings, pieces of equipment, and procedures to make convection mode work for you. Many commercial ovens also work well with convection when baking bread.

But most newcomers here, when using the upper (broiler) element and convection mode in a home oven seem to end up with overly dark tops that set/harden too soon and interfere with expansion.

"Bottom blow-out" has been a recurring theme on TFL, and is almost always associated with using the upper heating  element and/or convection mode. (A secondary cause of bottom blow-out is too much steam cooling the baking stone from below.)

And some convection ovens have only an upper or back-wall heating element, so some kind of cover is needed.

And of course, baking openly or in a closed vessel (dutch oven, etc) also makes a difference as to whether convection mode can be used to advantage.

So rather than spend days going back and forth trying to figure out how the newbie can configure his/her particular oven and equipment for a successful bake (and many newcomers don't fully understand how their oven works as far as which elements come on, when they come on, when the fan comes on [is it on full time, or only when the heating elements come on] and what that all means in relation to how bread bakes), ...  I find it much easier and faster to help the newcmer get to success by simplifying things and just using non-convection mode.

Most newbies want help in a K.I.S.S. fashion.  And the simplest and quickest way to avoid those dark and early-set tops is to avoid top-heat and to avoid convection mode.

As they advance in their baking skills, and in the understanding of how their oven works, and how all the various oven options/controls work, and equipment options (foil tenting, cookie sheets to block the upper element, cloches, dutch ovens, pans, lidded pans, etc) ... then they can confidently advance to more sophisticated baking.

I've long admired your bakes. You are obviously a sophisticated baker who is intimately familiar with how your oven operates.  This user wasn't aware that their oven had a lower heating element. They likely aren't going to attain to your level with a just a few back-and-forths of posts/comments.  It takes time, experimentation, etc., but I am confident they eventually can.   In the mean-time... baby steps and K.I.S.S.

Not sure to be honest how my convection works.  I just know I tried with and without and I like the way my bakes turn out with it on.  Appreciate your efforts in helping newbies as I’m sure it’s much appreciated.

Maybe 380 is too high and causes an abrupt oven spring?

Do you pre-heat the oven?   Or start baking in a cold oven?   Has this changed?

I fully preheat and I have checked with an oven thermometer to make sure the reading is accurate and it is. I guess the only element is on top unless there is a hidden one under the bottom floor of the oven - which I doubt. So when the oven thermostat commands more heat, it’s all coming from the top making that part of the oven hotter than the bottom space…

Yes, there probably is a hidden lower element.  You can check to see if there is one by setting to pre-heat, and after 30 seconds, place your hand near, not on, the bottom of the inside of the oven to feel if the bottom is giving off heat. You may also be able to see the glowing element through a hole or space between the parts of the lower surface.

Do you have any pans or sheets sitting on the bottom of the oven? If any objects are blocking or interfering with the heat coming from the hidden bottom element, then both elements, top and bottom, would be turning on more than normal.

That top heating element is then "setting" (hardening) the top crust before the dough is done expanding, as Mini Oven points out.

Uncovered loaf bread generally should not be baked with top heat, so you need to figure out how to properly use the bottom hidden element.

Don't assume there is no bottom heating element. You have to know for sure. Check the manual (look it up online) if you have to.

Added: Ovens that have only a top heating element (or only a back-side heating element) are full-time convection, meaning that the convection fan is always on when the element is on (or still hot).  Therefore, the fact that you can turn convection mode off, is strong evidence that there is indeed a hidden lower element.  Doing the above feel test, or checking the manual, will confirm.

Thank you very much! One thing I can adjust is the racks the pans sit on. I can put the pans on the lower rack to see if that helps. I discovered this oven comes with both a broil and bake element which is in the bottom and under the oven floor.

is setting before the spring. The spring then pushes the top aside as it springs.

Anything covering the loaf while it rises?  What is the relative humidity in the kitchen? Scoring might be an excellent option to let the crust expand. Can also try misting the surface during the rise or covering with a damp wrung out towel.

You also might want to reduce the amount of yeast.  Or give the dough two bulk rises, degassing after each.

Nothing is covering the loaves. I do mist the oven. Yeast is not excessive but I may experiment with slightly reduced amount Cheers!

How big are the loaf pans?   Do you bake all six at once?

What is the clearance between the pans and the oven side walls, back wall, and oven door?

Thanks again. I bake all six at once but rotate them every 8 minutes throughtout the baking process. The pans measure 2 1/2” deep x 5” wide x 8” long. There is not too much space in the oven between pans. Maybe about an inch or two between pans and the walls and oven door.

Perhaps that much dough mass is cooling the oven. That, plus opening the door every 8 minutes, is causing that upper element to come on too much.

It might also work better to bake only 3 or 4 loaves at once so you don't have to rotate so often,  and when you do, you can do it quicker and not lose so much heat.

He best way is to change only one thing at a time, so that you know what made the difference.

how hydration impacts rise % to be done proofing?
What to expect switching from 12.7% to 14%...
Sourdough rising but not doubling
Kitchenaid Artisan 5 qt vs Pro 5 qt
Twin Arm Mixer
END_OF_DOCUMENT_TOKEN_TO_BE_REPLACED