Hello bakers! These are a couple of my recent bakes. Stone-milled by hand. I test each new flour first to choose a hydration. Right now 80% hydration is my favorite for 100% freshly milled Hard Red Spring Wheat Berries. Typically I'll do 500g fresh flour and 400g (0 TDS filtered) water. Extended autolyse, either sitting beside my starter or in the fridge, at least 6 hours. I maintain a 50g (100% hydration) starter and feed 1:1:1 every 12 hrs. 20% Starter, 2% himalayan sea salt. I like to do stretch and folds, coil folds, lamination. Temperature/Timings are always changing so I keep that in mind and focus on watching the dough. I'll preshape once all the BF complete signs are there - the dough's texture has transformed from dense to light and airy, it has definitely grown and is very bubbly, it looks and feels puffed up with air like a balloon, the top is smooth and domed, it is very jiggly. I often tip it out on a floured surface and essentially stretch and fold it, then remove the flour, and round and tighten the ball, I do the 3 o'clock to 12 o'clock motion. Rest and repeat, then into banneton for the final proof. Sometimes the final rise takes 2 hours, sometimes it takes 20 mins, depending on the ambient temperature which controls the time. I've only been baking since November 2021 and so far the longest BF time was 12 hrs in the winter and my shortest yet is 6 hrs, and my starter is now tripling in 4 hours. My favorite oven temp right now is 450 F. In the DO covered for 25 mins, uncovered for 20. Sometimes I include a few ice cubes inside the DO. Scoring is deep and parallel and goes around from north pole to south pole for the coveted ear (4th pic)

I cannot express my pride and joy.

Great looking loaf.  I was very suprised at your refresh rate and time for your starter. I use home milled winter white, and even at a 1:3:3,  in 12 hours it has already risen and completely fallen, but then saw that you see a tripling in 4 hours, that made more sense.  BTW,  the few times I tried the ice cube trick, the loaf stuck to the bottom pan,  glad that has happened to you.

Thank you! I am finally seeing a repeated result, and beginning to play with scoring techniques and inclusions. That was my best ear yet. I was after the ear since the beginning and I was literally jumping up and down, dancing! Then I did the exact same score the next day and got almost identical result, of course no two breads are identical even when the specs are!  These ears fling upwards and I love them as they are, but I also seek the ears where there's peel-back vs the fling-up, if that makes sense, lol. Pictured are two different loaves, my two best ears. The second ear was a rye mix...Also the loaf in the 2nd pic from the original posting with no score that naturally opened up is a pure Red Fife. They're not all pure Hard Reds 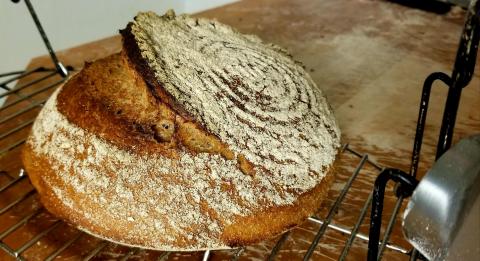 Ooo I really want to try white berries! Nature's white bread, so cool, when I first realized their existence, I thought nature gives us everything we need. Like Red Fife is the perfect balance between Hard Red and Soft Red. Amazing.

Just a thought: I bake bread with my Old Man, and I've seen him use what I thought to be a lot of ice cubes? We use a very small sized ice cube tray, not conventional, so I'll do 4 of these little baby cubes, it never stuck once, and he'll do like 8+, and it sticks. I heard there can be too much steam? Don't know, just sharing my experience and best guess. Certainly there can be too much of any good thing, and it's all a balancing act...in bread, and in life.

The following side by side pics with the same angle better demonstrate the differences, lol, I realize it's hard to tell those are two different loaves. The first ear is a pure hard red spring and the second is a 10% rye:

Those are some great looking loaves Boonks! It must taste amazing. Congrats!

It sounds like your regular feedings are showing up with your starter being extra active! Kudos!

Maybe you can try using parchment paper with the ice cubes trick to get more steam without sticking.

Great looking loaves, and I don't think I have seen that type of score with a boule before.

Thank you so very much. It's just a half moon or crescent I think they call it? Deep, like half the razor is in there. And parallel. I typed in boule scores on google images and found a bunch of helpful charts I use as a reference. I'm happy and excited to continue experimenting and shall report back!

Thank You, Thank You!!! Yes. This is the best bread of our lives. It has blown our brains. We have never experienced anything like it. What the hell have we been eating all our lives? This is a paradigm shift for us. The many different textures, the tremendous flavor, the mouthfeel, the contrast of the soft fluffy crumb with the crispy crunchy crust, the way it makes you feel after eating it, the way a single slice can satiate you for half a day...so much more. I actually feel a need to write about this.

It's real bread in a fake world. It means so very much to me. The symbolism of bread, the history and meaning, and going against the grain in this sick society...ironic we have bread but no nutrition. Bread has been demonized and there are so many lies and false limiting beliefs.

You're exactly right. There was a period I was skipping feedings (but would still give it a vigorous stir), or I'd feed 1:1:1 every 24 hrs or so, and I paid no mind to the times, I got lax and fed randomly. After maybe a week or two of this it suddenly became inexplicably sluggish!? It would not rise even 50% over 12+ hrs. I then returned to my consistent disciplined routine and it bounced back in shape after 2-3 proper feedings, it's been tripling ever since then. Now I figure if I wanted to do a 24 hr feed I ought to feed 1:2:2. But I'm happy with my routine and I have weekly discard recipes we enjoy, amongst other uses for it such as plant fertilizer and skincare.

Ah yes, I tried a cheapy parchment paper from China that warned against temps above 425 F. I did use it a few times anyways at 450 F, my chosen temp., and it stuck to the bread and it was hard to pick off. It also indented the dough and I didn't care for that. I may try again in the future.

I just baked another 10% rye tonight and it looks nearly identical to the last, cool!! Now that I know how to get this ear that flings up, I want to be able to get the other ear that peels back. Then the designs...The whole thing is about being able to create the bread you intend. Being able to repeat that result on demand. Being able to do it with your eyes closed...with your senses...

Oh wow! That is good to know. I will find a good quality parchment paper and try again.

Thanks guys. I appreciate the comments.

Absolutely beautiful loaves Boonks, really well done especially since they are 100% whole grain and that you’ve only been at this since November.  I guess you’ve figured out how to post photos too 😀

Thank You Benny!!! I was stubborn and obsessed and now I'm here! Yay! I guess a little hardheadedness and obsession will take you far!

Hahaaaaa. I was so disappointed when I thought I couldn't share photos. You could have the best bread in the world, or all the best things of the world, you could be rich and have it all, but it will mean nothing if you have no one to share it with.

Gorgeous bread!  Glad everything came together for you and you are finding your baking rhythm! ;-)

I always use parchment paper (the If You Care brand) and have never had any sticking, even with repeated use of the same piece.  I always crinkle the new piece up before using as it lays flatter and doesn't dimple the dough that way.  I use mostly clay bakers now, so unsure if the ice cube shock would cause damage or not, but I find spraying the loaves and/or ice cubes aren't necessary since the dough is wet and the DO traps that steam while baking, replicating a steam oven.  Sometimes more isn't more in that regard.

The bread you are making sounds and looks really nice and appears be nourishing you and your family more than just physically, which is also lovely.  Happy, happy baking!  It's a journey...

Your comment touched me. Thank you. Yes, it feels so good to finally find a rhythm. Yes, it is nourishing mentally, emotionally, and spiritually too. I feel deeply inspired by this bread. I discovered it while on a healing with whole foods journey. It sidetracked me because it was alien and it took a lot out of me to develop this skill...and then I just got obsessed and wanted to eat nothing but bread, hahaha!

I totally forgot about crinkling the parchment paper trick! I heard of it, never tried it, thank you for reminding me. I will look for that brand and try that.

Pictured is yesterday's loaf #68. My homemade peanut butter and berry jam fell through. The crumb was sooooo soft. 84% Hydration. Open crumb is impractical for my purposes, but I wanted to know it's possible.

Excited for this morning's loaf, it's my first time trying a 90% hydration!

And probably a bread blog... 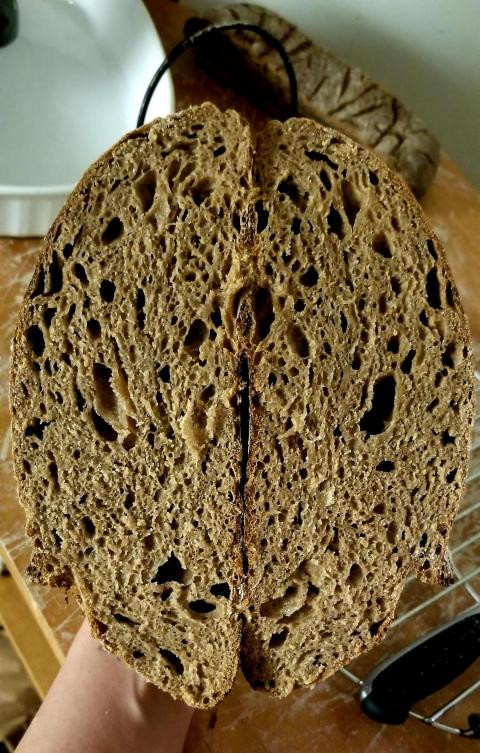 Aaand here is a meh picture of today's 90% hydration crumb...I think I'm onto something my dudes. Can't wait to try it again tomorrow! Ah I never thought I would get into photography...lol. I never took this many pictures in my life, hahahah! ♥️ The scoring was quite painful...need more sharp things

how hydration impacts rise % to be done proofing?
What to expect switching from 12.7% to 14%...
Sourdough rising but not doubling
Kitchenaid Artisan 5 qt vs Pro 5 qt
Twin Arm Mixer
END_OF_DOCUMENT_TOKEN_TO_BE_REPLACED