A few notes. You might not be able to knead the biga. Just let it soak overnight and it will firm up quite a bit as the flour hydrates. For the final dough you will likely need to add more flour to get the dough to come together and build enough gluten. If you are using the sprouted grain you should be sure to add the vital wheat gluten to help build the needed structure. If you do not have this gluten feel free to sub in flour for the sprouted grains. 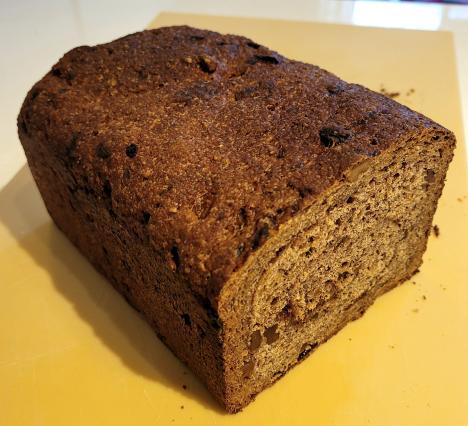 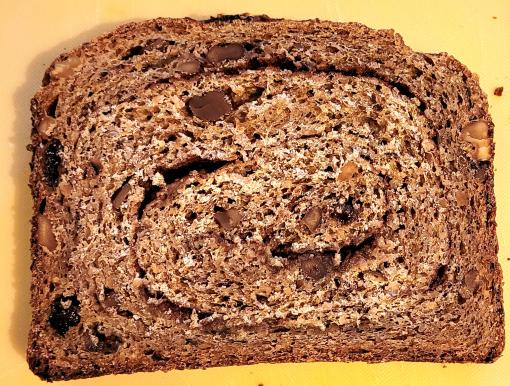 Tasting Notes: Rich and dense. You could even say toothsome. The bake took more time than expected so it has a pretty thick crust. It isn't unpleasant but if you are expecting a lighter softer bread whole wheat is not the answer for you. The cinnamon sugar swirl is not very visible in the cross section nor is it an overpowering flavor. It's more like a nice subtle pop of flavor for a bite here or there. The same with the raisins. I taste them on occasion but the wheat is so strong the kind of get a little lost in the richness of the wheat. And apparently there are walnuts...but I can't tell!

Time/Effort: 4 days - Day 1 begin sprouting. Day 3 Mix Biga and Soaker. Day 4 mix dough, prove, and bake. While it sounds like a long time it's mostly just planning ahead. With just an overnight soaker this bread really comes together in a single day.

Would I make it again: Yes, but as a transitional bread that uses 50% whole wheat and 50% bread flour. I think the raisins and cinnamon sugar would have a better chance to shine with a less dense bread. It's good but maybe too many good things have made the flavors less clear and more muddled together.

It stands for concentrated lactic acid sourdough. It is an excellent dough conditioner for making airy, soft, and flavorful 100% whole grain/whole wheat bread in only a few hours. If you are interested in learning more about it, please see here, and here's the 100% whole-grain raisin bread that I made with CLAS.

Thanks for the information. I will have to read up and probably give this a try. Always happy to learn new/different ways of doing things!