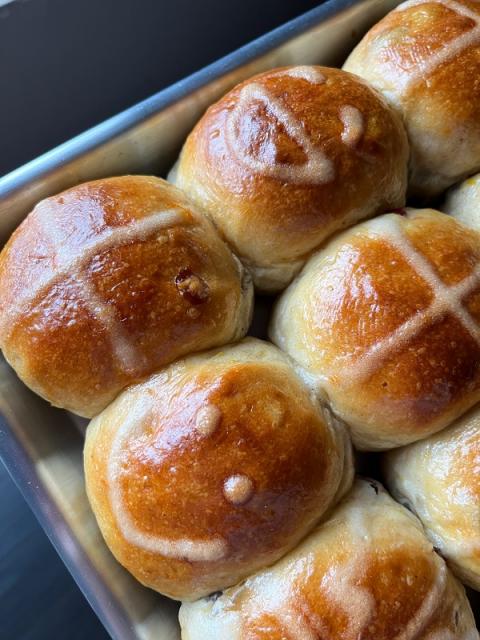 Isn't it nice when your baked goods smile at you? :p 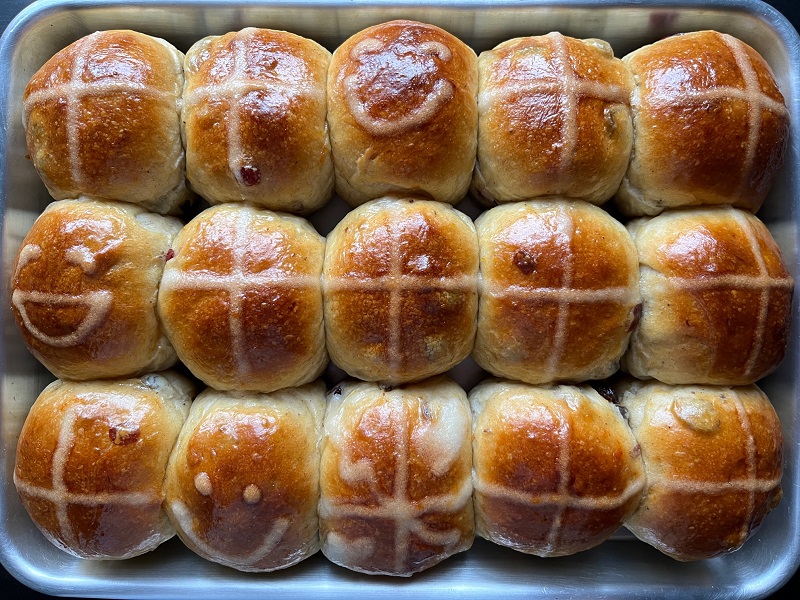 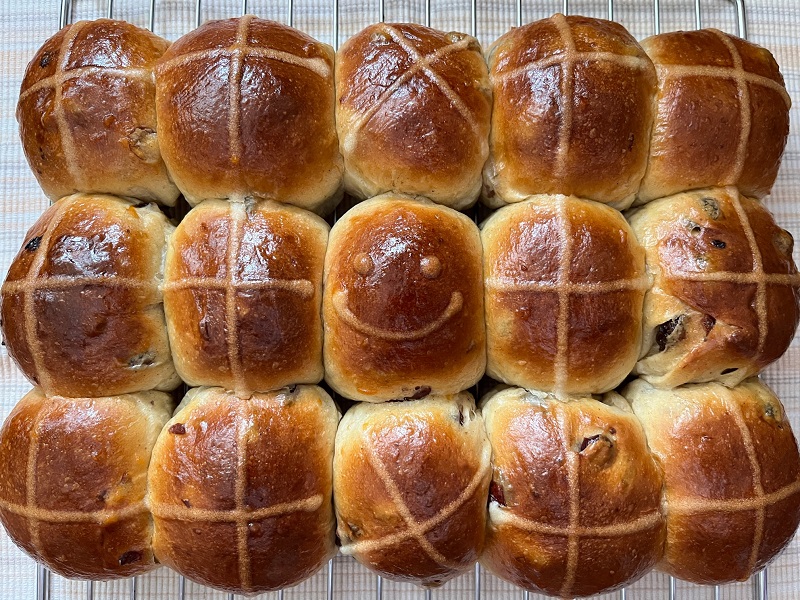 These are my 'happier' hot cross buns this year

I've used the same dough above without the cinnamon, allspice and nutmeg as rolls too. For these, I baked them at a lower temperature 160°C for about 30 minutes. 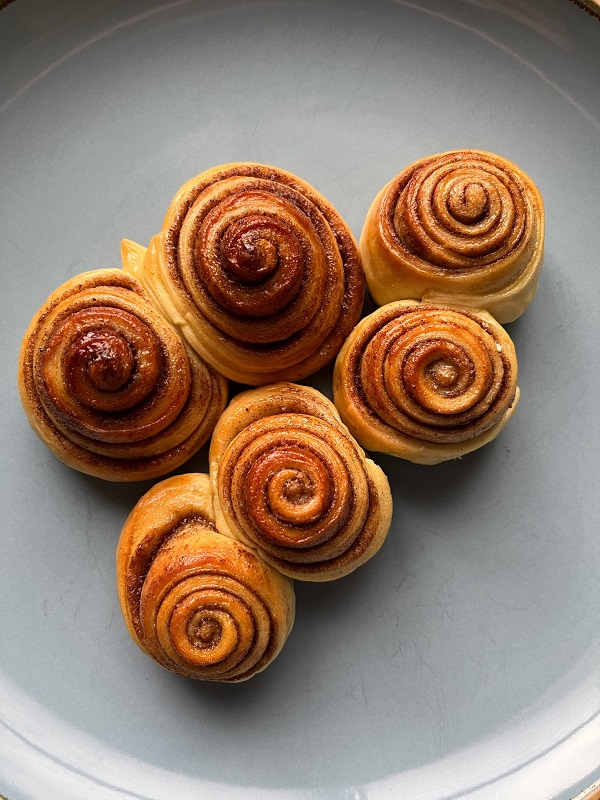 Next, I made small sourdough paska loaves using my 6" cake pan. The fun part included the origami involved in making the liner for my cake pan. This loaf is another same day bake! :) 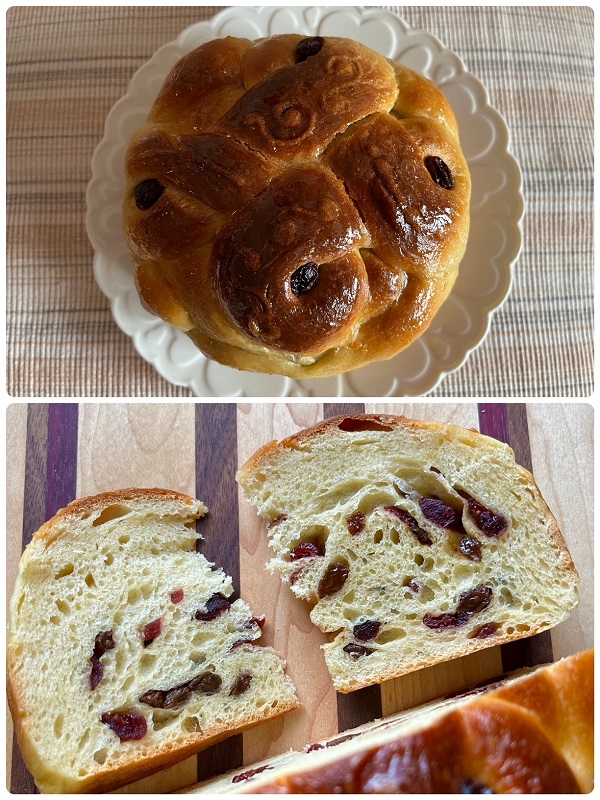 Mix on low speed every ingredient except salt and butter. Rest 30 minutes.

Add salt and butter, mix on low speed until absorbed. Then increase speed to 2 and mix for 15 minutes until the dough is smooth and elastic.

Remove about 100-120g of the dough for the decorative top. Shape this smaller dough into a ball and transfer to a small greased bowl.

Deflate both doughs gently. Form the larger dough into a boule and flatten with a rolling pin to about 5-inch in diameter. Place it in the lined 6” pan. Lightly press the centre to make a slight indentation. Then, brush the top of the dough with egg wash (this helps the decorative strands to stick and stay in place) 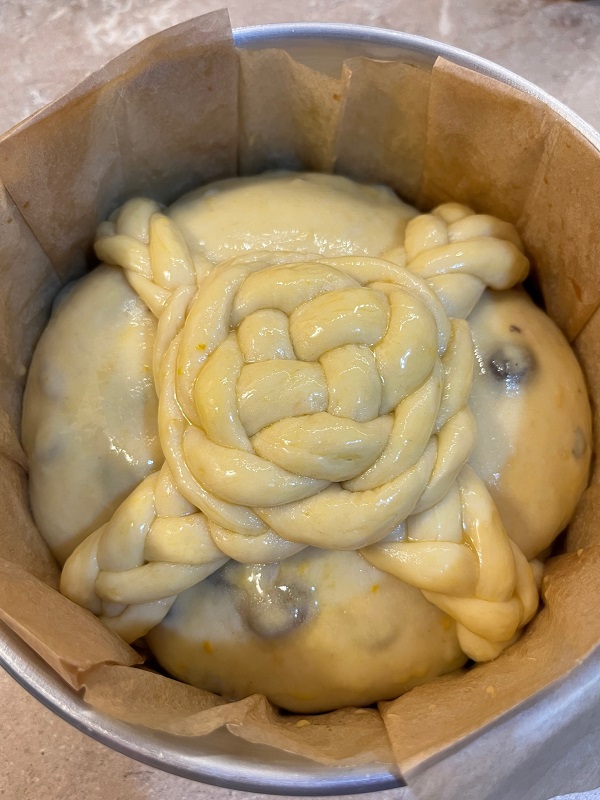 Cover and let the assembled dough proof until the dome of the dough is about 2cm from the rim of the pan. This may take 3 - 4 hours at 24-26°C.

Preheat the oven to 190°C about 30 minutes before bake time. Brush the top of the paska with egg wash.

Place the paska in the oven and reduce the oven temperature to 180°C. Bake for 45 to 50 minutes or until the internal temperature reaches at least 93°C.

Prepare the sugar glaze: bring water and sugar to a boil. Stir until all the sugar has dissolved. Reduce heat to low and let the syrup simmer for 5 minutes. Remove from heat and brush the syrup over freshly baked paska. 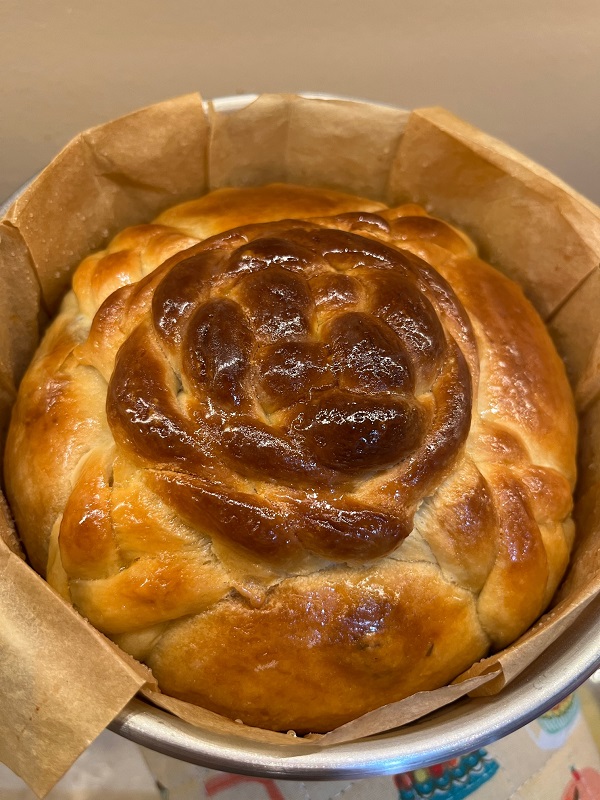 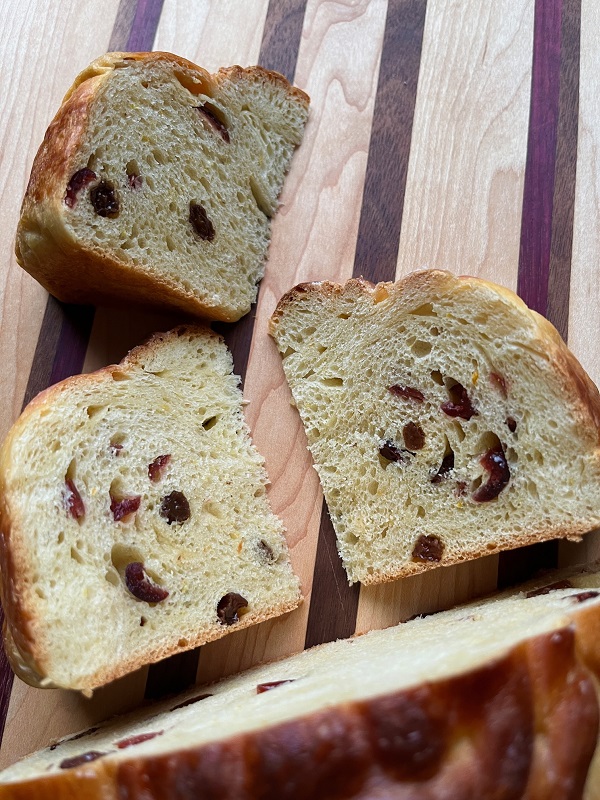 Remove the loaf to a cooling rack and let it cool completely before slicing.

All your baking is gorgeous, let’s do a trade of our hot cross buns!!

I’m glad I’m not the only baker who likes to do parchment paper origami.  I love folding the sheets of parchment to line my pullman or my 9x9” pan for pull apart buns.

Love the braiding on your paska, it is very pretty Christi. 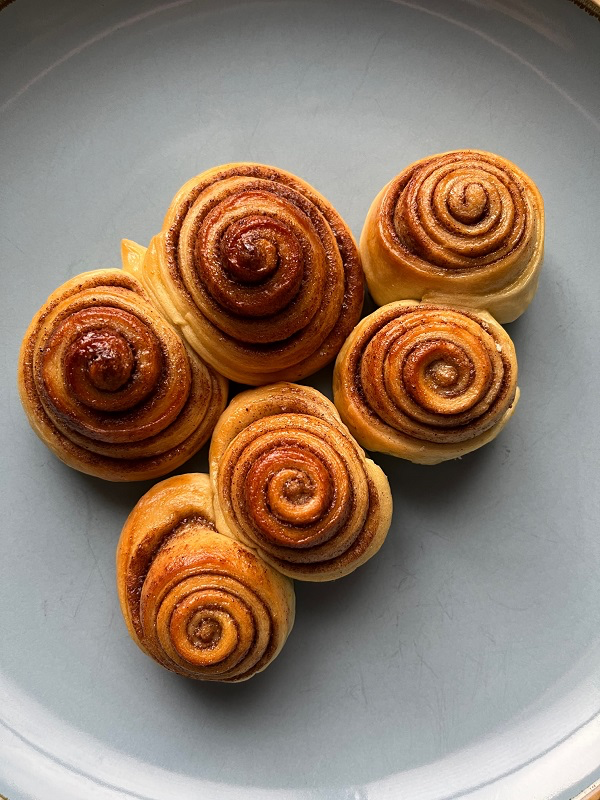 Like the way your layers are thin and distinct.

All of tour breads are beautiful!

I was going to post about this dough I've been using lately. Here are my answers:

How would you describe the dough? Sticky, dry, soft, tenacious, etc..
Sticky at first. Then, soft and manageable after it's fully mixed.

What did the hydration feel like at the time of rolling out?
A very easy manageable 63-ish %. I believe it'll be even easier if the dough was chilled.

Is it correct to assume the dough was rolled out with a rolling pin?
Yes sir!

Was there an obvious sour flavor (discarded SD) when eaten?
Zero sourness. I'm almost certain the sugar (even at about 11%) and the zests getting rubbed into the sugar, thus releasing all the bitter oils (volatile or non) helped. Even the paska made in this post had zero sourness. Also, the temperatures were kept at 21-23°C throughout (my kitchen's been 20-21°C and I left the dough and shaped buns to proof in the microwave that somehow keeps a temperature of 22-23°C. And my starter is kept around those temperature as well, and fed at a 1:5:5 ratio most days.

Here's how I prepared the buns. I'll elaborate in another post, but I hope these photos help: 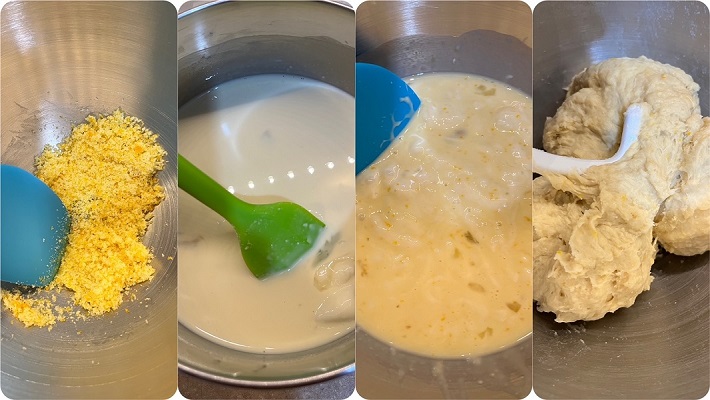 First the zests are rubbed into the sugar, I usually just do this in the mixing bowl itself. In a saucepan, prepare the Tangzhong (TZ). Once the TZ is done, remove from heat but continue to stir it to cool it slightly. Then, add in milk (I find the dough is softer if there's higher milk fat used, so far I've tried 2%, full fat, combination of 10% and 2%), egg and vanilla extract to the TZ. The temperature of the liquids won't be high enough to cook the egg, so don't worry. Add this milky liquid to the zests+sugar mixture (pic 3 above), followed by the flour mix (flour, salt, yeast). Mix on low speed (stirring speed on my machine) until a sticky dough forms (it's stubbornly sticky). Cover, and let it rest for 30 minutes. 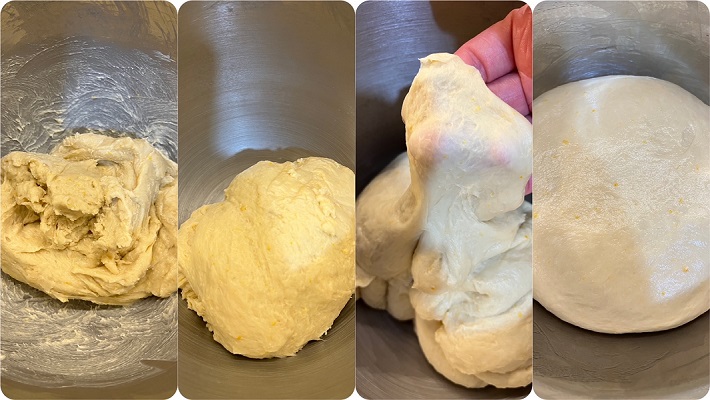 After the rest, add in butter and oil in 3 additions. This took me about 5 to 10 minutes on low speed, stopping every 2 minutes to scrape down and flip the dough. By the time the last pieces of butter are absorbed, increase mixer speed to medium low/medium (speed 2 on my KA), stopping every 2-3 minutes to scrape down and flip the dough (I know, this sounds tedious but it helps the dough come together!). After about 16 to 18 minutes, the dough is smoother and no longer sticky. The 3rd photo was taken at about 15 minutes but I continued mixing until the 18th minute just to get it smoother. I didn't check for windowpane again since this dough was meant for small buns :P Then, the dough was covered, rested for 1 hour 45 minutes at about 22-23°C. After shaping, the final proof takes about 1 hour to 1.5 hours 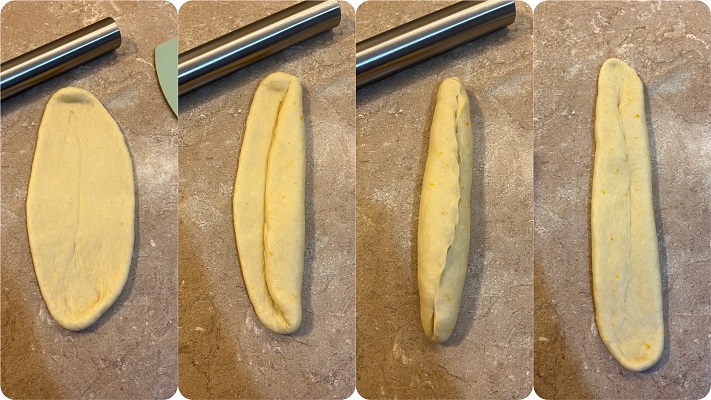 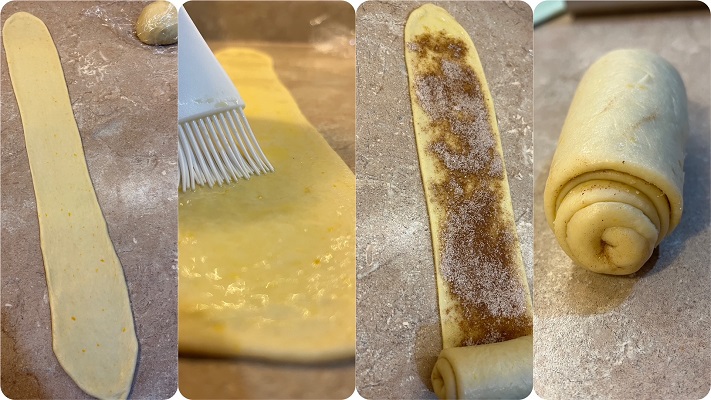 In order to get a distinct cut, the roll is split into two and placed cut-side up. For a more stable base, the rounded ends will be sliced off - this method results in lots of sliced rounded ends that I form into a single tangled bun. 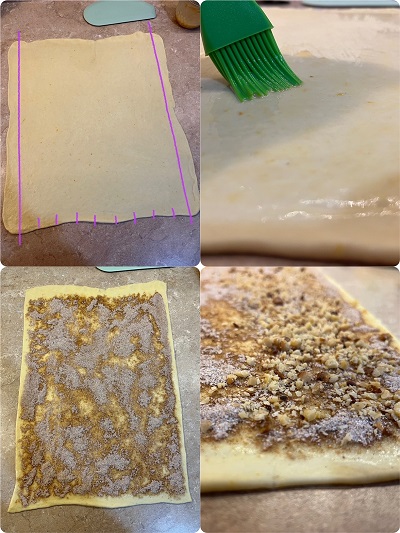 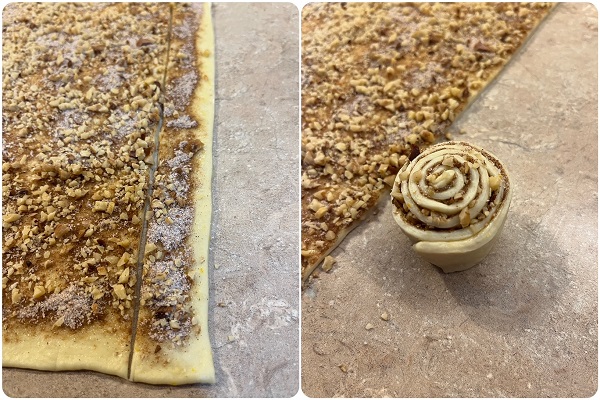 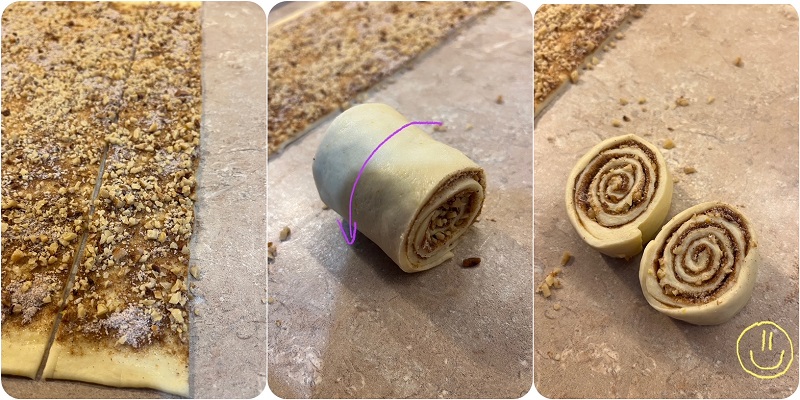 for twin rolls, slice 2.5 to 3" wide. Roll and then slice into two. This step will give flatter bottoms, no need to slice extra bits off to keep the buns stable. 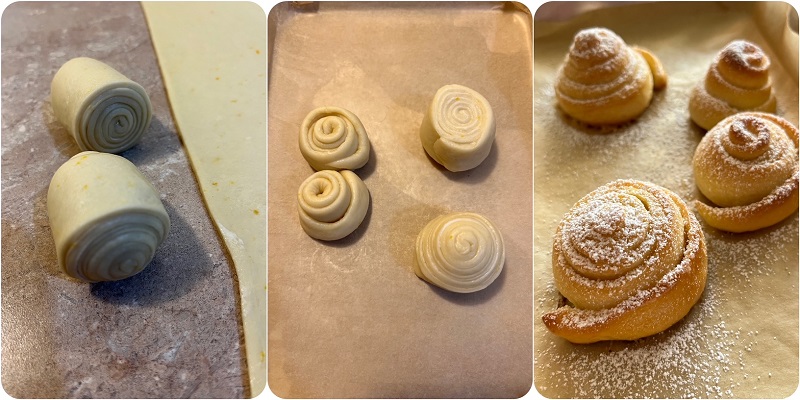 the uneven edges of the main dough, spread with butter and rolled into Mallorca bread. Baked at 160°C for 16 to 18 minutes. Dusted with icing sugar after it cooled. 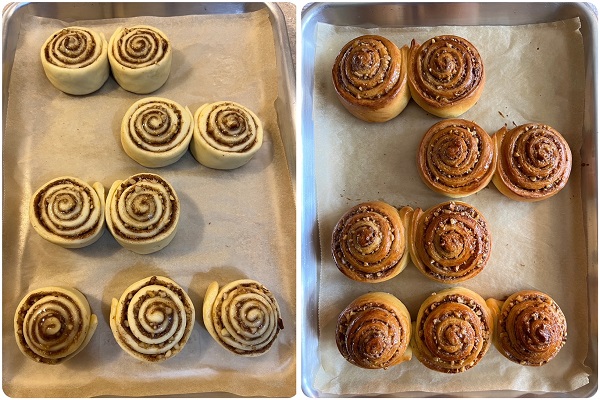 the single or twin rolls were filled with cinnamon sugar, chopped toasted walnuts. Baked at 160°C for 25-30 minutes. Brushed with a simple sugar syrup right after baking.

My apologies for the lengthy reply.

As beautiful unbaked as baked. Those photos really show the degree of care and expertise taken to get to that gorgeous end result. Thanks for sharing.