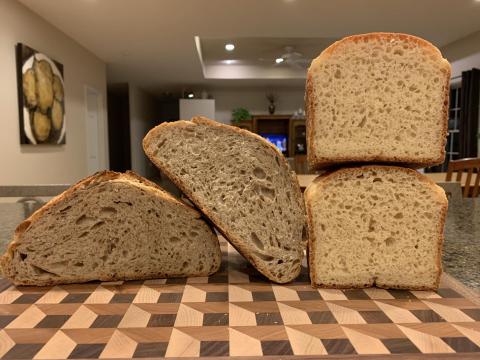 I was asked by a friend...
"How about making an English Muffin Bread?"

"Not sure.  I've never made English Muffins."

A Google search and a few mouse clicks brought me to the recipe for English Muffin Toasting Bread on the King Arthur website.  Made the initial test bake today.  I followed the recipe verbatim, so I won't repeat it here.  The only difference was using a Pullman pan instead of a standard 8.5" x 4.5" bread pan.  I couldn't let it rise over the lip of the Pullman, so I let it rise until I saw the first couple holes appear on the surface of the dough.  Easy recipe and actually smells really good for being such a short ferment. 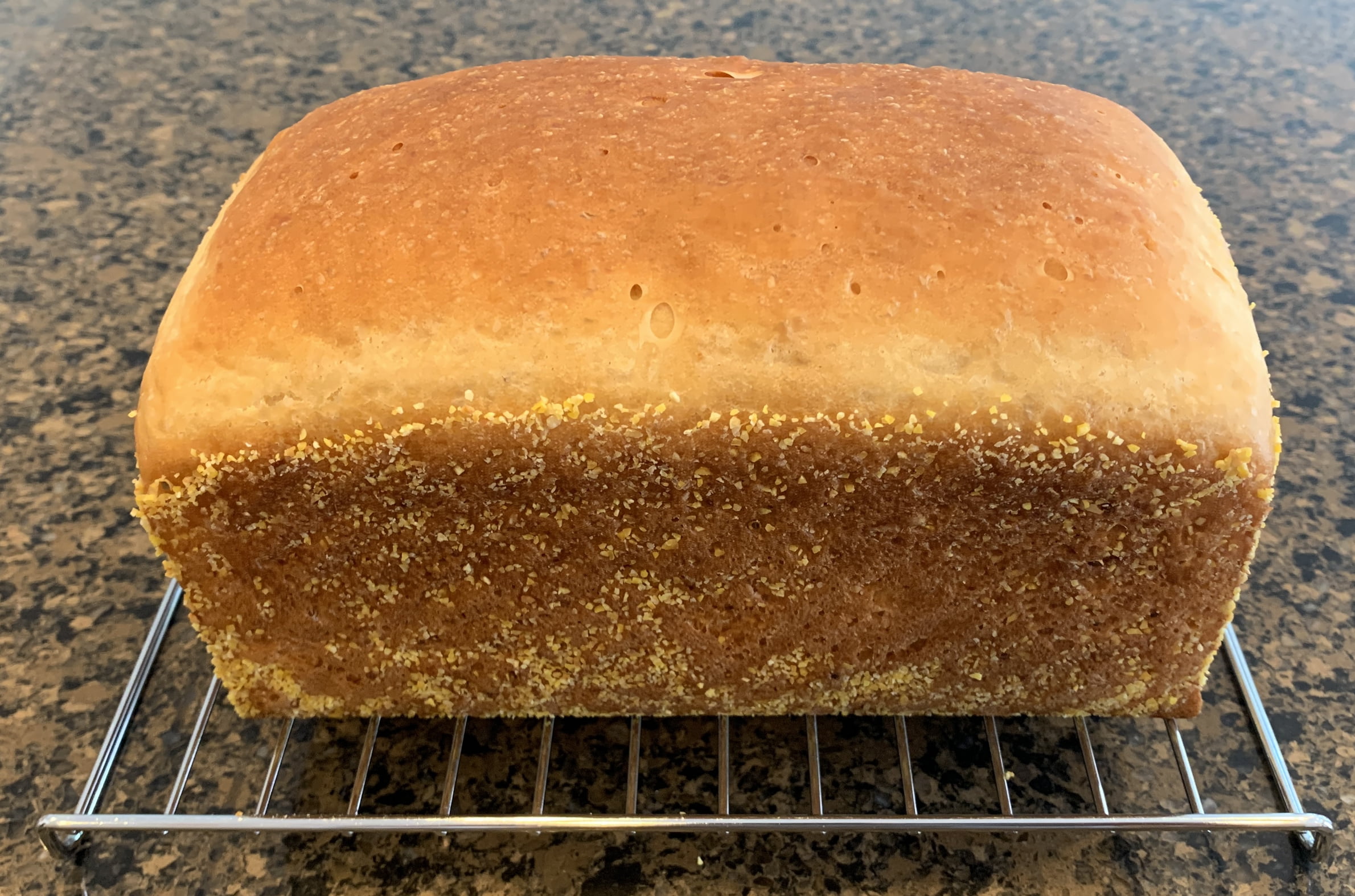 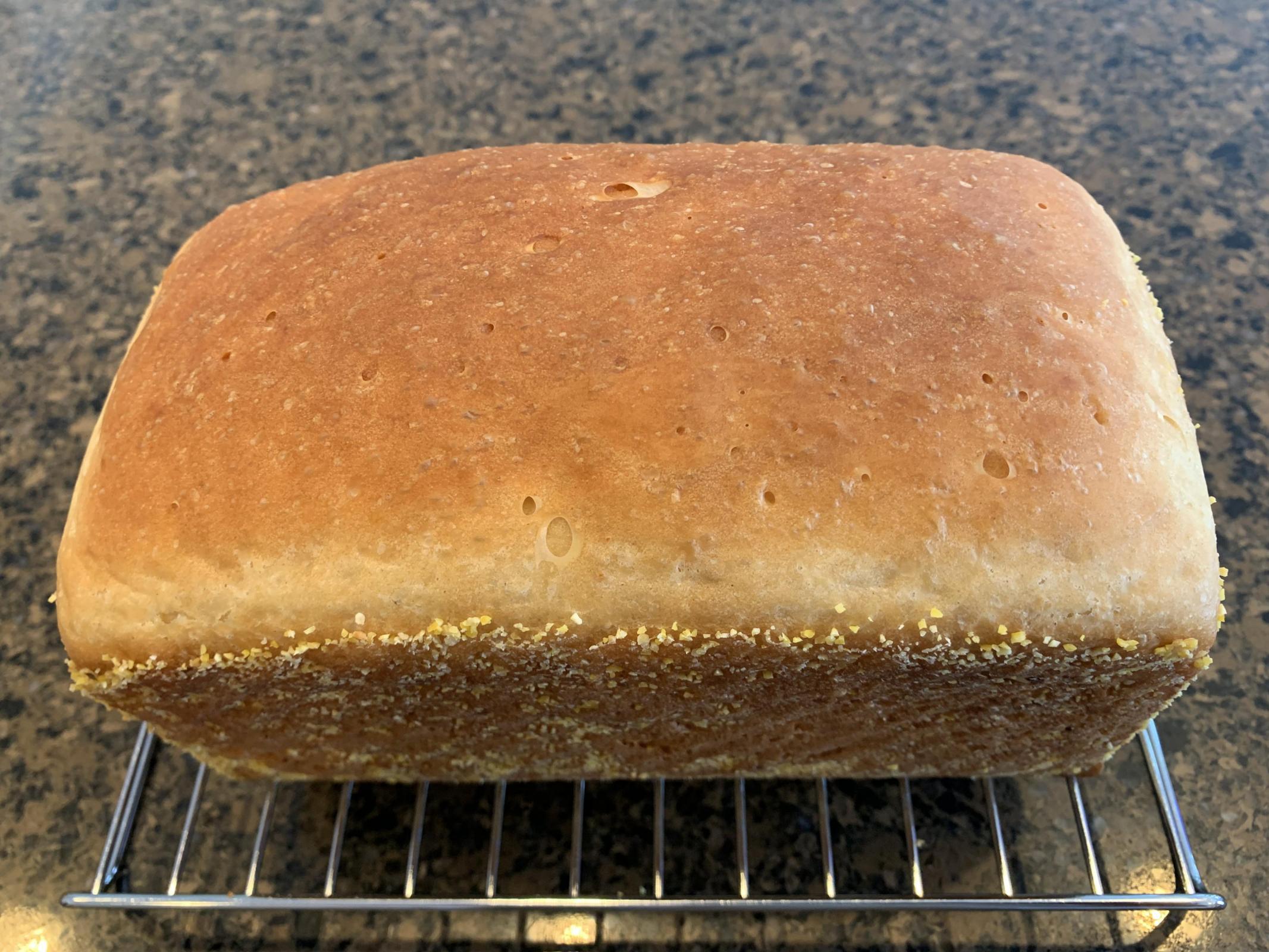 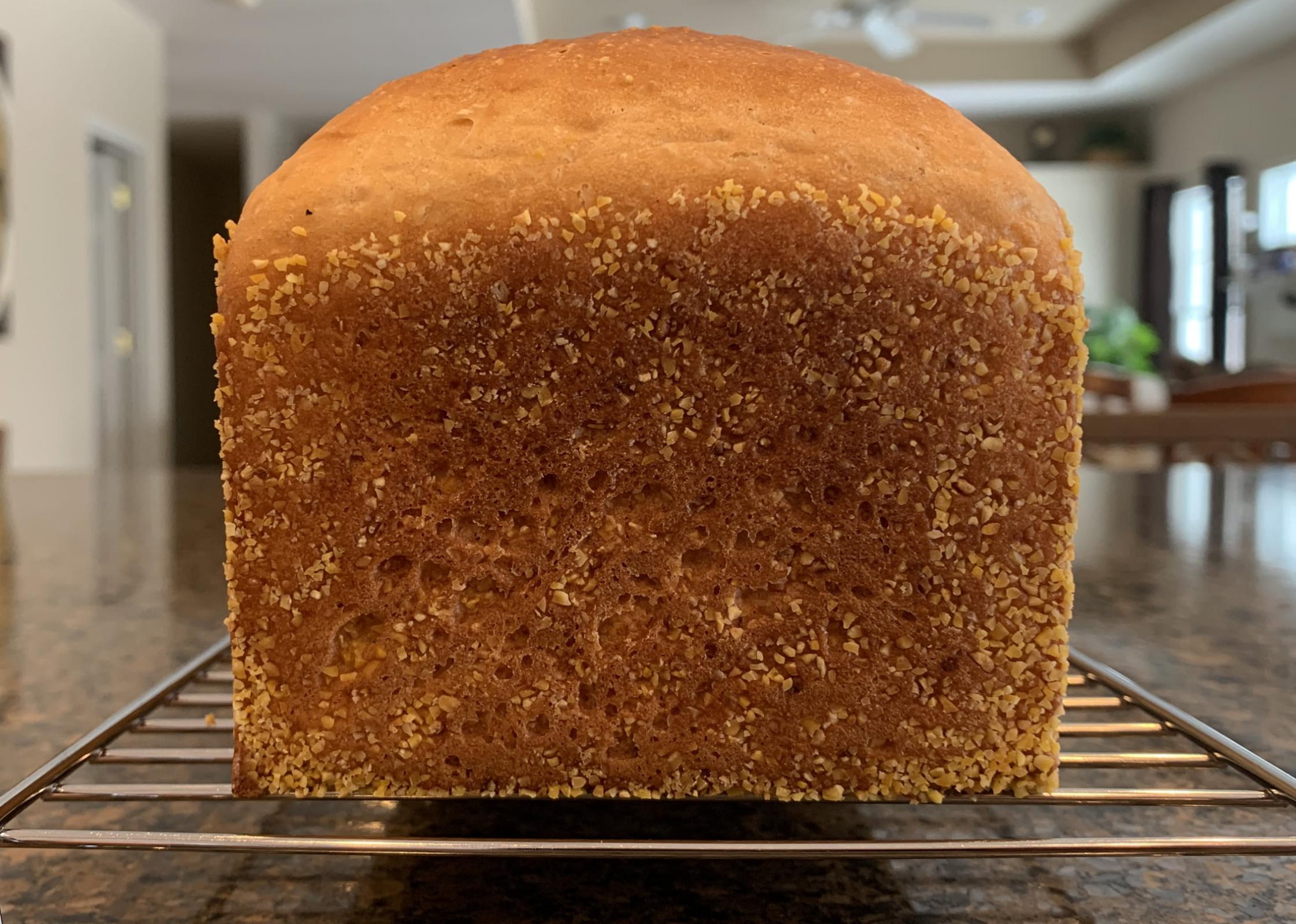 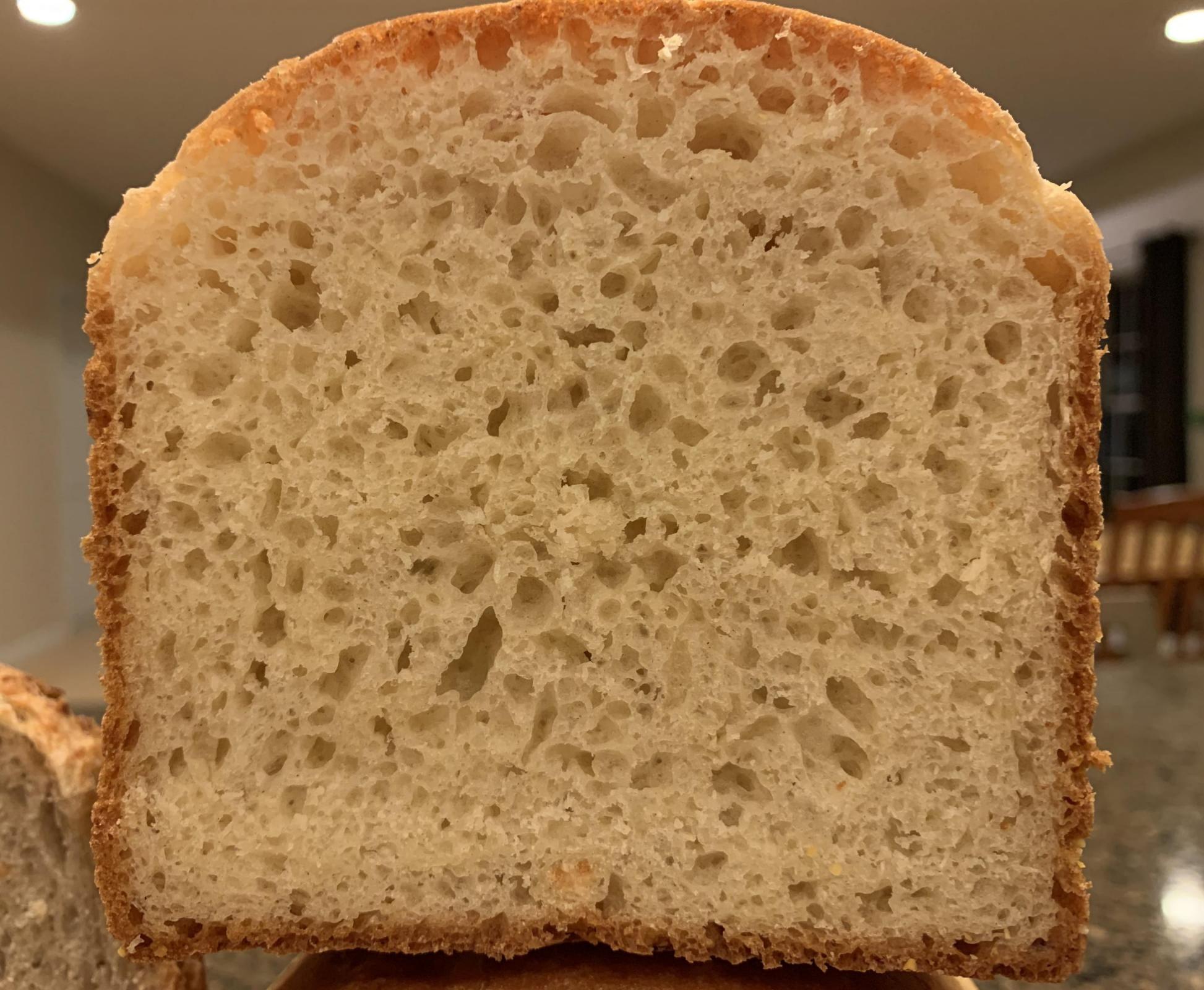 Another barley variant.  Sourdough this time with a barley flour/cracked wheat soaker.  This is the first bake using the starter cultured from the honey YW sediment.  It had been in the refrigerator for a few days but still had great gluten structure, so I decided to use it in a levain without refreshing.  I increased the inoculation a bit (just in case) to account for possible sluggish performance on the levain build.  I did an overnight build and the levain looked good after 11 hours at 70 deg F.  Bulk fermentation was really slow and had only reached 75% after 6 hours.  Final shaping was round and the final proof was stopped at 2 hours.  The dough had risen some but not what I was expecting.  However, it had some decent jiggle to it and easily passed the poke test, so I proceeded to the bake.  I did get some decent oven spring and overall, I'm happy with the loaf.  Smells tangy, has a great profile, and should make some good sandwiches.  To me, it looks a little tight and underproofed.... 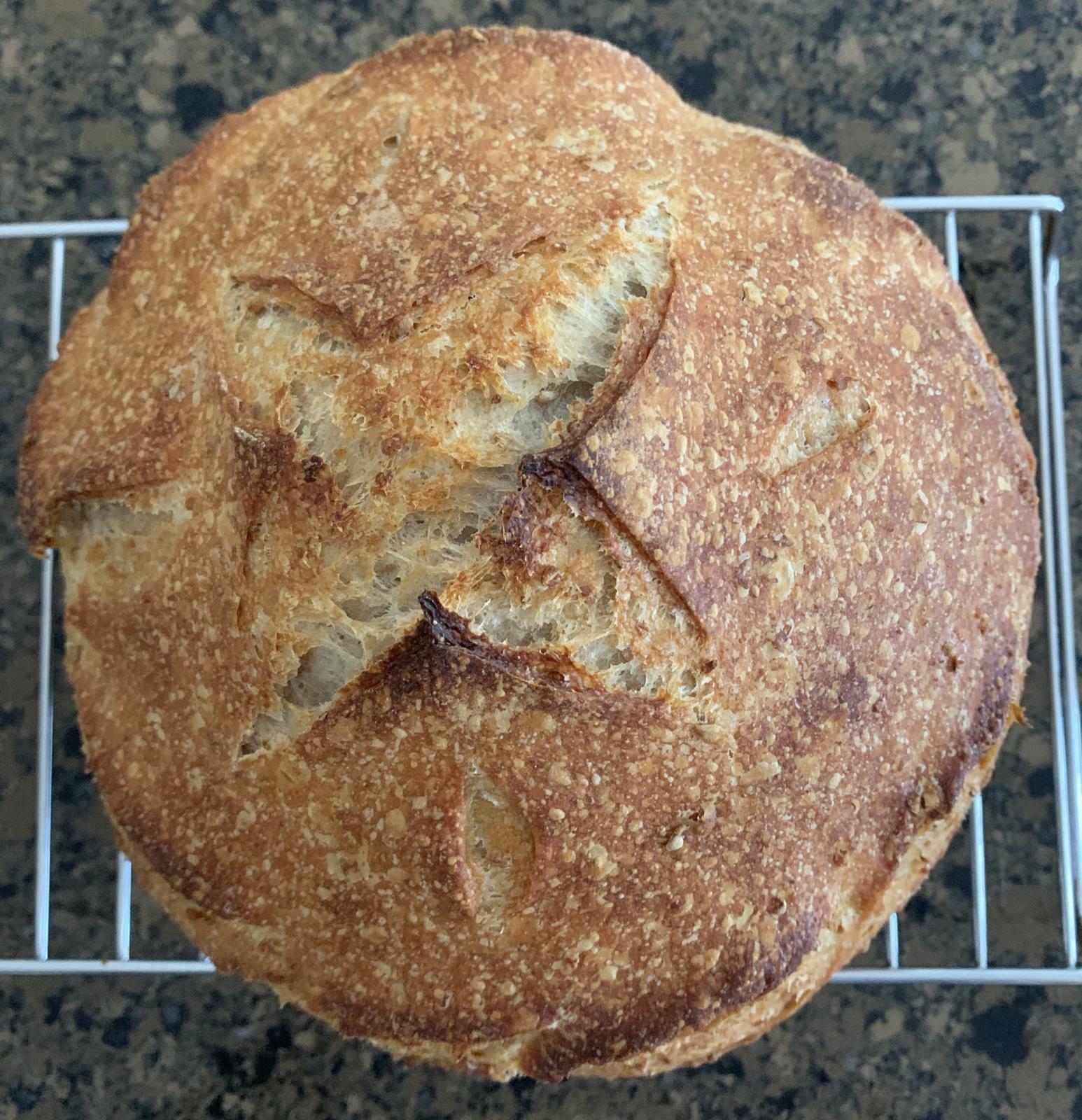 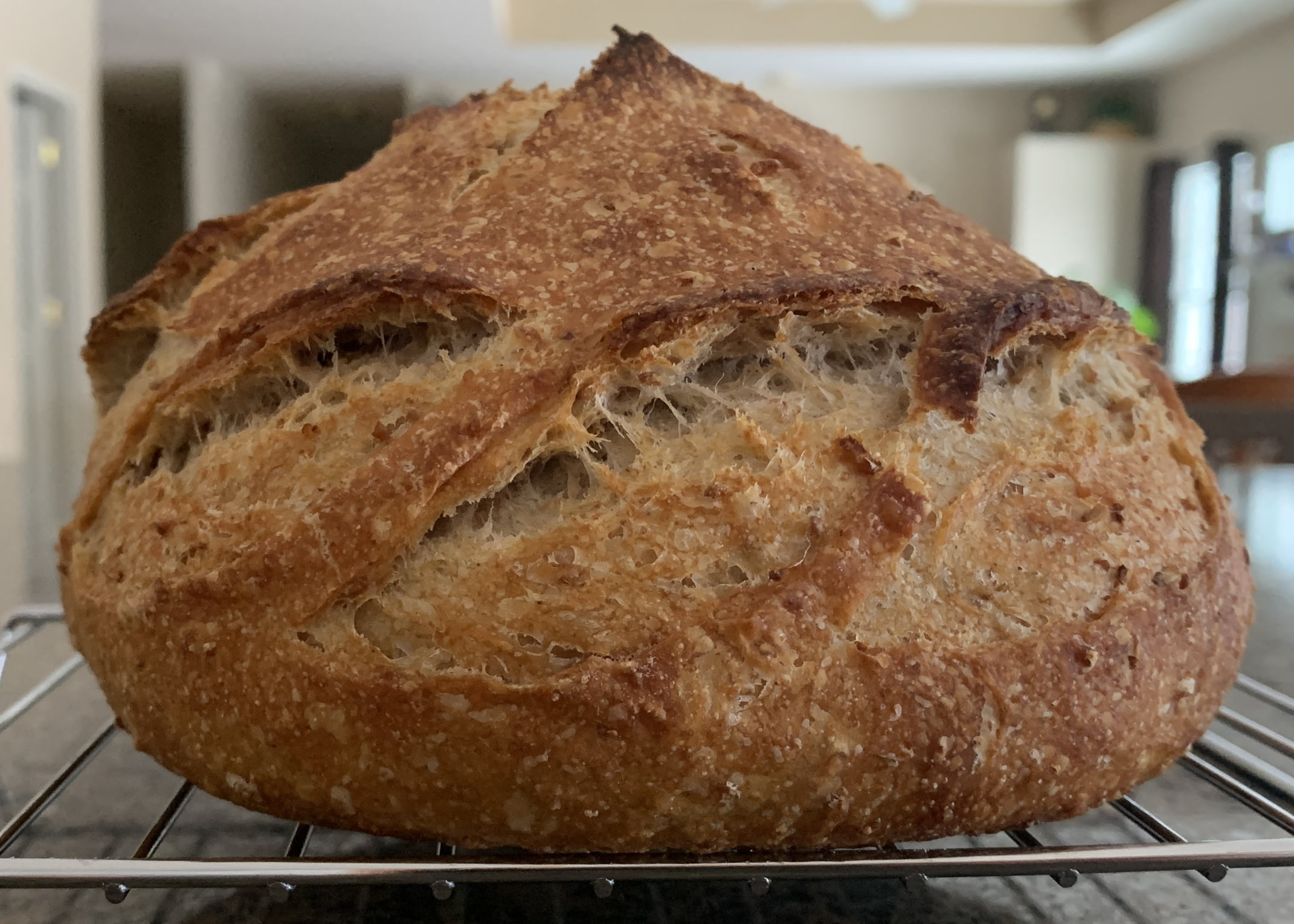 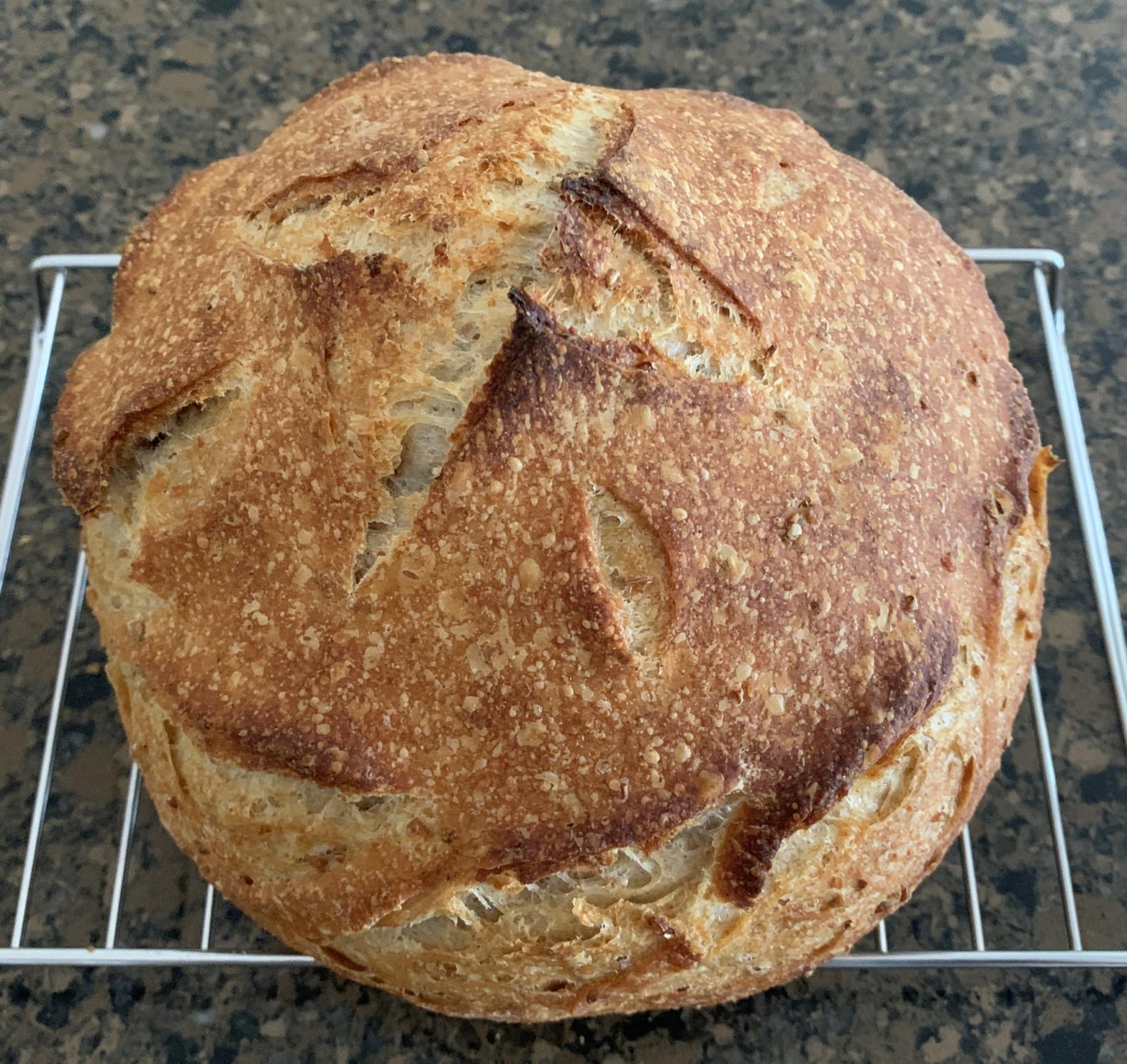 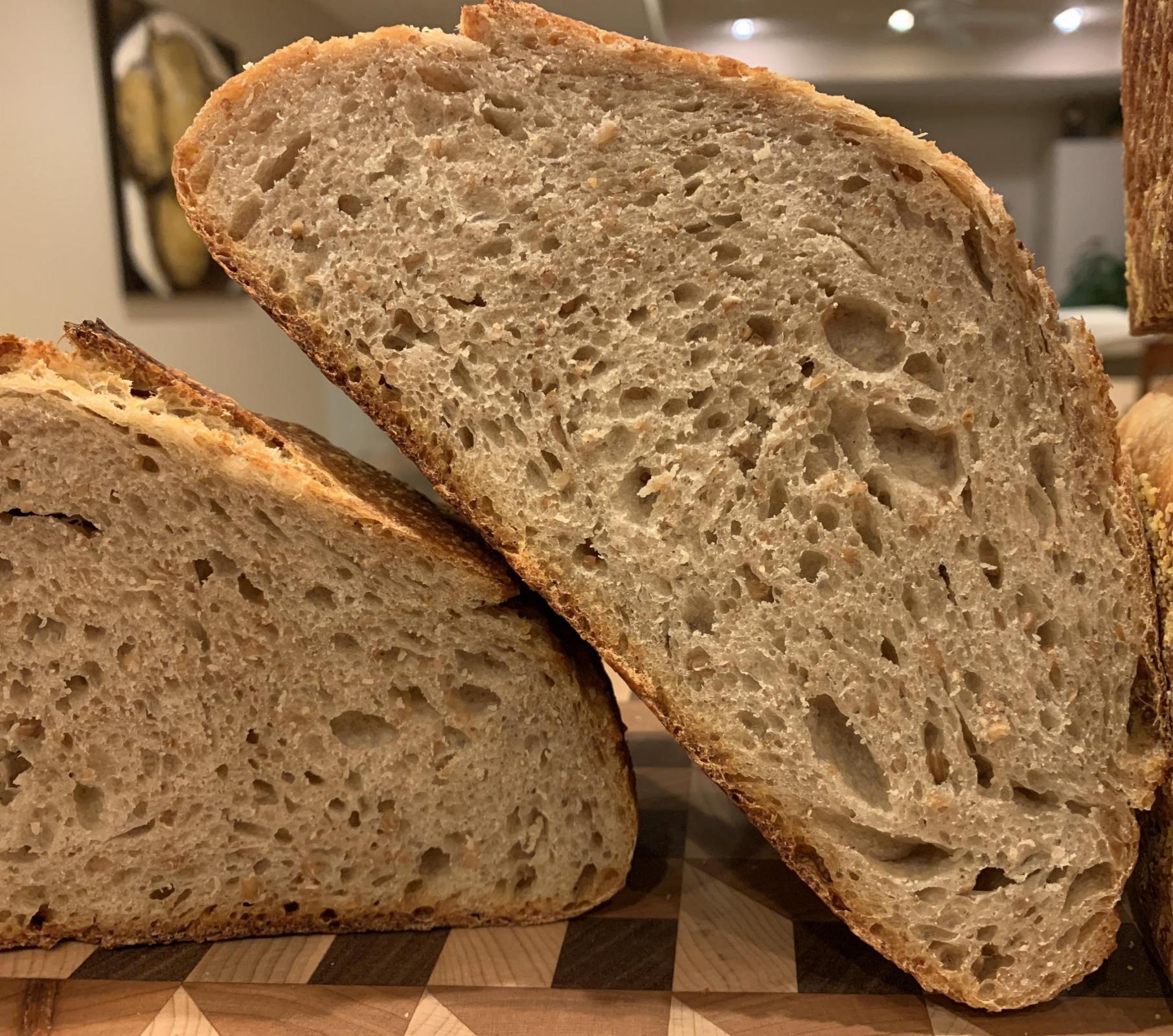 Oh, nice loafs, especially that toast one. For the pan loaf, how much did you allow the dough to expand in the pan before bake?

Once I knew the dough was higher than the standard pan, I gave it another 10-15 minutes and baked it.  If I had to guess, it was at least double the original volume and probably closer to 2.5 times.  The couple of small holes in the dough surface was also a good indication it was ready to bake.

The dough is very loose and easy to work.  The key is to gently press it into the bottom of the pan to get rid of any air bubbles that formed while loading the dough into the pan.  Just use a wet spatula or I used food service gloves with wetted fingers.

Thanks Troy for your insight about this bake, that should give me something to shoot for when I do a toast loaf, obviously it will probably take a couple of trail runs to get it right. Toast!!!

Good luck and hope it turns out for you.  It's a nice recipe that goes amazingly fast.  From start to finish in under 2 hours...  One tip...  Follow their advice on the website and start your oven pre-heating as soon as you're done putting the dough in the pan.  :-)

Very nice, both of them! I baked the very same toasting bread a couple of times and forgot about it, thanks for the reminder. Your loaf with barley flour looks great!

I love the English muffin toast bread Troy.  I love that there is corn meal? on the outside crust, it really is like an English muffin in another form.

I have some barley flour and need to use it eventually but I’m not sure where to start.  Do you have a favourite recipe for barley sourdough?

Thank you Benny!  It was supposed to be cornmeal, but I didn’t have any of that.  Used polenta instead.  Hopefully those bigger chunks aren’t tooth busters.  :-)

I don’t have a favorite recipe for barley flour.  I’ve just recently started making it more prominent in some of my breads.  I regularly added a small percentage to a country SD type recipe, but usually not a main component.  I was really happy with the flavor of my last bake (Hiivaleipa).  Yesterday’s was fundamentally a Vermont SD with 20% whole grain (barley).

I would suggest something like this maybe to see if you like it as a predominant part of your recipe…. Your Country SD recipe with your Sweet Stiff levain but replace the whole wheat and rye (or just the whole wheat) with barley flour.  When you prepare your levain, do a boiling water soaker on the barley flour.  Keep everything else the same.

Let me know what you think if you try it!

Those are great ideas, I do like the idea of doing a yudane/tangzhong with flour that has little/no gluten.  Anyhow your barley bakes are inspiring to those of us who haven’t baked with it before.

I have noticed that I don't seem to have the mental connection between pullman squares and toasters that some have. I'm happy to stick any shape in the toaster :)

Thanks David!  I was surprised at the color of the crumb too.  Still haven’t tried this, but may for a snack this afternoon.

No arguments on any shape.  My hearth loaves go in the toaster every morning for breakfast. Although I will say that I miss my toaster oven.  Old one failed and we replaced with a conventional toaster to save some counter space.  My hearth loaves end up with a big chunk left hanging out and have to stop mid toast and flip it.  Kind of annoying, but can’t convince my wife to scrap the toaster and get a new toaster oven.  😁

Yeah I do the flip for long slices. I also have chopsticks nearby to fish out the smaller pieces :)