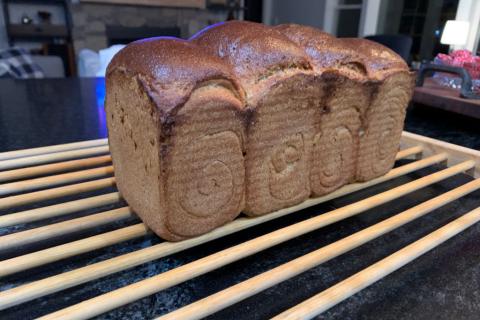 I've been intrigued by several recent posts that feature a 100% whole-wheat Hokkaido milk bread, such as this one by Benito.  So I decided to try my hand at it.  Almost.  The "almost" being that I changed it from a sourdough bread to a yeasted bread.

Actually, there were two variations from the bread that Benito posted.  First from sourdough to yeast, as mentioned above.  Second, I had no vital wheat gluten on hand, so subbed in flour in its place so as to keep the hydration more or less in balance.  The second change was the one that concerned me more since I wasn't sure how much the bread relied on the VWG for structure.  As you can see in the lead photo, it turned out quite nicely.

Rather than repeating the formula and process here, I'll refer you to Benito's excellent post.  My adjustments were quite simple.  I moved all of the levain ingredients to the final dough ingredient list, including the flour and water that were part of the 100% hydration starter for the levain.  I added 6g of active dry yeast in the final dough ingredients, too, since it was needed in lieu of the starter for leavening the bread.  My flour was home milled from hard red wheat.  Fermentation times had to be shortened, since the ADY moves quite a bit faster than the wild yeasts in a starter.

The dough was very wet.  I realized, too late, that I hadn't followed Benito's advice about reserving some of the milk and had simply added all of it.  After a bit of thought, I added some more flour, perhaps 20g or so.  It was enough to turn the dough into something manageable but not so much as to require additional salt or yeast.  Between the dough consistency and the extended kneading that the bread requires, I decided to let the KichenAid mixer do all of the work.  Because I had to stop the machine occasionally to scrape down the dough from the walls of the bowl, I extended the mix duration about three minutes past the recommended time.  That developed the gluten in the dough very well.  The dough was about 85F coming off the mixer.

The dough was given 30 minutes for bulk ferment; it had expanded perhaps 50%.  After that, it was set out in our screen porch for another 30 minutes to firm up.  The temperature out there was in the 25F-30F range, so it cooled down quickly.  Then I followed Benito's process for shaping and placed each of the rolls in a greased Pullman pan for the final fermentation.  When the top of the bread was about 1cm below the pan rim, I started the oven preheating and egg-washed the top of the loaf.  A second coat of egg wash was applied just before the bread went into the oven.  The bread was baked in the pan and then an additional 10 minutes out of the pan, per instructions.  While I don't think the bread required the last 10 minutes to keep the sides from caving in when it cooled, it certainly helped remove some of the moisture.  I elected to forego brushing the top of the loaf with butter at the end of the bake.

There's a lot to like about this bread.  The finished loaf is about treble the height of the just-shaped loaf, so plenty of expansion between final fermentation and oven-spring.  As expected, the crumb is very fine-grained with evenly distributed and evenly sized small bubbles throughout. In spite of its loft, this is a substantial loaf of bread.  It isn't what I would describe as airy or cottony.  Though it yields easily to chewing, the crumb is firm and moist and feels almost cool in the mouth.  You can sense the presence of the bran, even though it is finely ground.  The sugar offsets the natural bitterness of the red wheat.  It is delicious with just a bit of butter, and toasted. 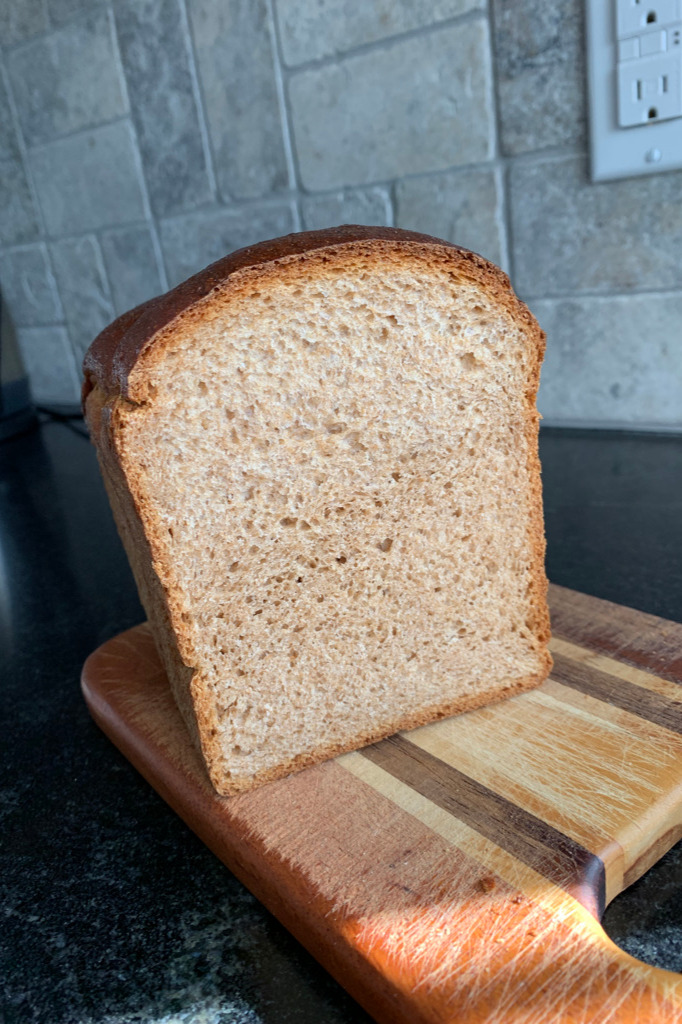 For a future bake of this bread, I'd be interested in trying an autolyse to see if that might have a positive effect on dough consistency and the ultimate tenderness of the crumb.  I'd also like to see how the flavor would shift when using honey as the sweetener.  One thing is certain: I will make more of this bread.

Nice and lofty and quite an even crumb.

You might try putting all your bran into a scald or the tangzhong. It would take any edge off and might contribute to creaminess and produce a rounder wheaty flavour.

The thing is, I have a KoMo Fidibus stone mill.  All of the bran particles come out about the same size as the endosperm particles and the bran+endosperm particles.  That means screening will leave an appreciable fraction of the bran in with the rest of the material that passes through the screens (that I don’t presently own).  Tempering would help with that, I know, but introducing two more steps in the milling process tilts the cost:benefit ratio in the wrong direction for a guy who's happy just to make his own whole-grain flours.

I appreciate your suggestion and see the validity of it.  It just doesn’t align with my priorities.  An autolyse, on the other hand, might yield similar benefits for scarcely any change in process.  Maybe.  We'll see.

Sprouting would also take the edge off and it's mostly labour-free. I still have a bucket of sprouted and dried rye from a few months ago ready to go.

Lovely loaf, Paul. I attempted to make it last weekend but overmixed the dough. I'm not used to such long mixing times. I should have stopped mixing at the first sign of a windowpane, and after giving it one more minute, the gluten started to break down. Lesson leaned. I'm encouraged by your beautiful loaf to try it again.

I was fortunate to have avoided that particular problem.  Better luck with your next attempt.  There's no way for me to know the protein content of the wheat I used but it may be that yours had a lower protein content that wouldn’t tolerate as much mixing.

What a gorgeous loaf! I’m enjoying the little to no effort bread at the moment so if my rye turns out well I will have to force myself to try Bennies Bread 😂.

It really did turn out nicely, which was quite a relief after changing some key elements of Benny's formula.  From what I’ve seen of your recent bakes, I anticipate that your rye bread will be just fine.

Excellent looking bake Paul!  Looks/sounds like you made the correct pivot after mixing with the additional flour.

then apparently I did make the right choice.  I’m pretty tickled by how this turned out.

From the appearance, I can't tell the difference between this and Benny's.  Also the crumb has a really nice consistency to it.  All in all it looks like a perfect bake.

You could even say nicely, nicely.

Since this doesn’t employ any VWG, I really didn’t know what to expect.  There was a very real possibility that it would be another short, dense loaf.  That it rose so nicely is a testament to the hydration level and the intensive mixing,  Based on this, I’m going to extend the mixing/kneading times for some of my other WW breads to see if they benefit, too.

this duet, but in keeping with the theme... https://youtu.be/JcOtgY4TAdU?t=67

Thanks for sharing it!

Another beautiful sandwich loaf on TFL.  The profile of this loaf is very attractive, and it would make a nice gift loaf.  After seeing this one, Dan's revival of TX Farmer's sandwich loaves, and of course Benny's Hokkaido bakes, I will have to take the plunge into sandwich territory.  How is the keeping quality of this enriched 100% WW formulation compared to the distant lean dough hearth loaf relative?

By that, I mean this style; not this specific loaf.  The four scrolls, with alternating spirals, expanding upward to give the eye its own enjoyment.

I baked the bread on Thursday and it is now Sunday.  The bread isn’t quite as moist as it first was but is holding up well with no evidence of staling.  Fragrance and flavor still say “fresh”.  The milk, butter, and egg all contribute fat, which helps the bread keep better than a lean bread.

Take the plunge with whichever bread sounds best to you.  All of them In this style have their merits and are delicious.

Wonderful bake Paul, you did so well converting it into a commercial yeast bread.  It would be hard or maybe impossible for a 100% whole wheat bread to have that cottony crumb that an all white loaf can have.  Your crumb looks perfect, I’m glad you tried this and I hope others do as well.

To tell you the truth, I haven’t tried the 100% whole wheat without the VWG and I’ll have to give that a try at some point.  You did well by adding that extra flour when the dough seemed too wet, yes holding back some milk is a good idea for others to remember.

You had everything laid out very well.  I was relieved that the VWG turned out to be non-critical for the bread, even though I’m sure it is useful for maximizing loft and standing up to the sourdough acids.

You are exactly right that “cottony” won’t ever apply to an all-whole-wheat bread, even one with enrichments and extended kneading.  It’s very sturdy but pleasantly so.

Thanks for the formula and for your comments.