This formula included some roasted white sweet potatoes and freshly milled whole wheat. The ricotta was added to soften the crumb along with some olive oil.

I was relatively happy with the outcome. The toasted corn meal did come through as much as I would have preferred but added to the other ingredients the overall bread had a nice soft crumb which was very flavorful. 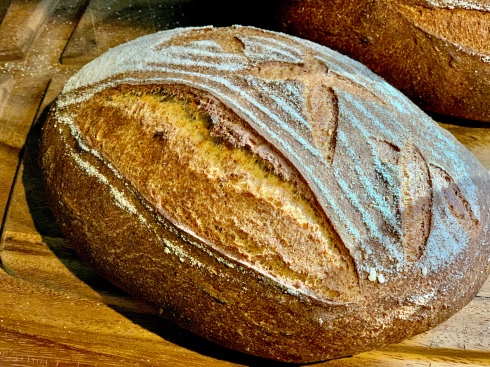 Mix all the levain ingredients together  for about 1 minute and cover with plastic wrap.  Let it sit at room temperature for around 7-8 hours or until the starter has doubled.   You can use it immediately in the final dough or let it sit in your refrigerator overnight.

Toast the corn meal/flour in a dry frying pan on medium for 4-5 minutes until fragrant. Make sure to stire so you don’t burn the flour. Let cool to room temperature before using.

I added the starter to the water and broke it up and then added the flour and potatoes and mixed to a shaggy rough dough formed. Cover the dough and let it sit at room temperature for 30-60 minutes. Next add the rest of the ingredients and mix on low for 10 minutes (if using a different mixer I would suggest mixing for around 4-5 minutes).

When you are ready to bake remove the bowl from the refrigerator and let it set out at room temperature still covered for 1.5 to 2 hours.  Remove the dough and shape as desired.

The dough will take 1.5 to 2 hours depending on your room temperature and will only rise about 1/3 it’s size at most.  Let the dough dictate when it is read to bake not the clock.

Around 45 minutes before ready to bake, pre-heat your oven to 540 degrees F. and prepare it for steam.  I have a heavy-duty baking pan on the bottom rack of my oven with 1 baking stone on above the pan and one on the top shelf.  I pour 1 cup of boiling water in the pan right after I place the dough in the oven.

Right before you are ready to it in the oven, score as desired and then add 1 cup of boiling water to your steam pan or follow your own steam procedure.

Lower the temperature to 450 degrees.  Bake for 35-50 minutes until the crust is nice and brown and the internal temperature of the bread is 205 degrees.

Take the bread out of the oven when done and let it cool on a bakers rack before for at least 2 hours before eating.

I wonder if the cornmeal would pop more if it had some complimentary flavour. The ricotta, honey, olive oil and starter might compete. Some middle american dishes using corn-based tortillas might have clues.

Another possibility is to build a toasted cornmeal scald.

I don’t think the other ingredients impeded the corn flavor but I like your idea of the scald.  Appreciate your comments!

Love your combinations ! What great flavors . Where are you getting your corn to mill ? Are you buying organic dent ? I need some and have put off ordering Breadtopia has gotten so expensive suddenly as far as shipping that I am putting off buying. Any info welcome. Bet that bread of yours would make a wonderful grilled sharp cheddar sandwich !!! c

Thank you Caroline.  I’ve been buying my whole wheat and rye along with the corn from Barton Mills.  I can’t say that they are cheap but I’m loving all the grains I’ve tried.  Let me know what  you think after your take a look.

weird that the whole kernel yellow corn is more expensive than the cornmeal. Would expect the opposite. They have much better shipping that's for sure, I think I will email and see if the pricing is a mistake. Thank you for the link I had forgotten about them and you had told me you ordered from them previously . My memory ain't what it used to be !!  c

This sounds and looks great Ian.  I love the sound of the toasted corn flour/meal and bet that it can bring great corn flavor.

It didn’t come through as much as I thought it would but it’s worth trying again.
Happy Baking!

I placed a big order from them today. The flat fee $9 shipping is great!

I tried to find out if the pricing on the yellow corn was an error but they don’t answer their phone and didn’t answer email. It’s the only item they sell that is more expensive per pound  in whole kernel form than the ground flour form.

Anyway looking forward to some new to me grains. c

Let me know what you think.  I’m a big fan of their grains.