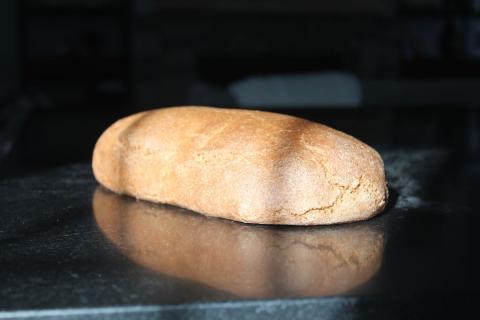 This is a bread from Stanley Ginsberg's The Rye Baker.  It caught my eye as I was casting about for something to use for the current rye bread Community bake.

It is about as simple as a rye bread can be.  There are no multi-stage levain builds, no scalds, no soakers, no seeds, and no spices.  The only components are rye flour, potato, water, and salt.  My sole departure from the formula was to use whole rye flour, rather than medium rye flour.

The initial sour build the night before the bake incorporates rye sour, riced potatoes, rye flour, water, and salt.  That last was a bit different from many levain builds in that all of the recipe's salt goes into the levain.  Once mixed, the sour is covered and allowed to ferment overnight.

The next morning, the rest of the water and flour are mixed with the sour.  The stiff dough/paste is fermented until it the volume increases about 1.5 times.  Then the paste is tipped out onto a floured countertop and shaped into a loaf.  The loaf is placed on a lined baking sheet and allowed to ferment until cracks begin to show on the surface.  For this bake, I could have allowed the final fermentation to go longer but I could see that there was some sideways expansion in the loaf even though the top was still relatively smooth.

The bread is baked without steam.  When it comes out of the oven, it is brushed with boiling water to soften the crust, then cooled.

The photo at the top of this post shows the finished loaf.  And here's a picture of the crumb: 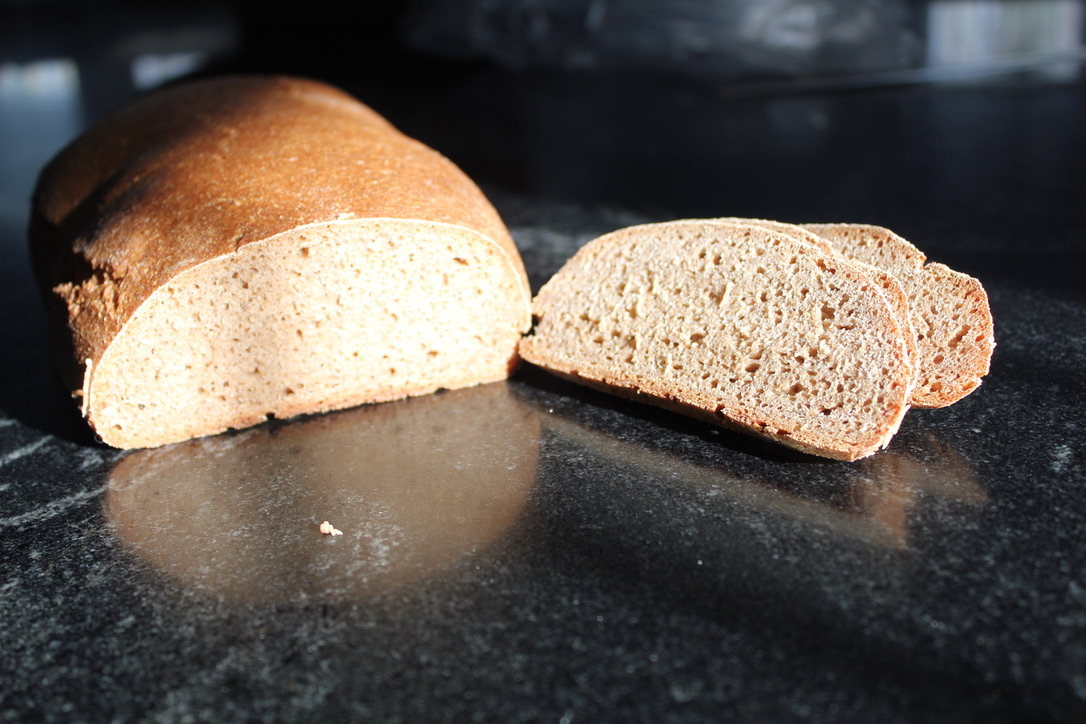 Not surprisingly, the crumb is close and dense.  Some 40 hours after the bake, the bread cuts cleanly without leaving a film on the knife.  It is moist and pleasantly chewy.  Thanks to the boiling water application, the crust is somewhat leathery, rather than armor-plated.

Flavor-wise, it is all rye.  The potatoes don't lend a discernible flavor note.  While I had expected some sourness, it is surprisingly subdued and very much in the background.  It will make a very good foil for cured meats, pickles, mustard, and other strongly flavored foods.

Outside, it's cold although this morning's low of 4F is much better than yesterday's low of -13F.  There's an ice-fishing derby out on the lake today.  A few of the participants and their shelters are visible from the front porch: 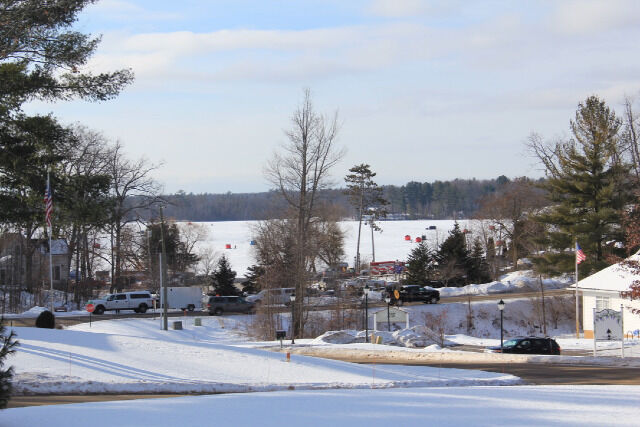 There are many more outside the frame of the above photo.  I took a walk around and spoke to some of the contestants.  My impression is that my bread weighs more than anything they were catching.

That way the grain itself can be fully appreciated for what it is. I think the potato might be added for texture more than flavour. That looks like a dense but even and soft crumb.  Very nice bake, Paul. And thank you for bringing this recipe to my attention.

This bread is definitely the rye, the whole rye, and nothing but the rye, so far as flavor goes.  It made a very tasty ham sandwich for lunch today.

The crumb is fairly dense, as is to be expected when using whole rye flour.  It is moist enough, though, that it is pleasantly chewy rather than hard or tough.

Note that I dispensed with baking it on a layer of maple (none available this time of year) or cabbage (none on hand that day) leaves.  Instead, I used a silicone pan liner and it worked just fine.  I'm sure that parchment would have performed just as well.  Something to keep in mind when you get around to baking it for yourself.

Based on the profile of that loaf, I wouldn't think rye.   It looks like a perfect "country rye" loaf.  I haven't baked with potatoes yet, but this loaf is a good reminder that I should try it at some point.  It looks like a beautiful winter day.

it is slightly misleading since there is nothing for comparative scale.  The loaf is slightly more than three inches high and perhaps five inches wide, so the crumb isn't nearly as open as it may appear.  Still, very acceptable for a bread made with whole-rye flour (and we all know that potato does nothing for the gluten content).

This morning was very sunny and pretty.  Clouds have moved in this afternoon and now the view is decidedly more February-ish.

Crumb looks great, certainly fluffier than my whole ryes :). Baking with potatoes/squash is on my list as I enjoyed making gnocchi with them.

As for potato flavour, I wonder what might happen if the potatoes were seared a bit to bring in some Maillard browning flavours.

I remember Mini made some bread with old french fries.

Wow!  I was thinking the other day about a "Mind of a Chef" episode where a recipe was made using popcorn "extract" (soaked an squished through a strainer) to add a strong popcorn flavor.  It would be interesting to use that instead of standard water for popcorn flavor.

I think both Hamelman and Reinhart have published bread recipes that use roasted potatoes.  Those are left in chunks whose presence and flavor are noticeable.  The boiled and riced potato in this recipe is entirely dispersed in the dough during mixing and serves as a way to add cooked starch and moisture to the bread.

I've had breads with either winter squash or pumpkin in the mix and liked them.  They add both moisture and sweetness more than flavor.

Handsome loaf Paul, are you happy with it overall?  The crumb is likely quite soft and tender with the addition of the potatoes and nicely moist I’m sure.  It’s way too cold where you’re living, that is much too cold for me.

The texture is firm but yielding and feels quite moist while being chewed.  I'm sure that the potato enhances the texture.

This has been our first brush with colder, though certainly within normal range, temperatures for this winter.  You definitely want to dress for the conditions.  I guess I had expected Toronto to be colder, since it's on the north shore of Lake Ontario.

Couldn't imagine more opposite weather than we had today!

I like rye breads with and without spices.  It's been interesting to find that a lot of folks who "don't like rye bread" are actually not fond of caraway.  Give them rye bread with no seeds/spices, or with some other flavoring (dill seeds are a good choice), and they find they enjoy rye bread after all.

Since you prefer your rye bread sans seeds/spices, dive right in and make some of this for yourself.

Nice bake and nice write-up too.  Lately I have gotten into some rye breads (Lithuanian and Borodinsky), but nothing with any potato.  This might be a nice thing to try.  Also, I feel confident that your loaf is more pleasing than whatever the people out on the lake were feasting on, and they certainly had to bundle up more.  Here in Connecticut we have had a cold winter, but not much snow.  Fine weather for bread, but what kind of weather isn't?  Thanks for posting this.

The bread certainly isn't as slimy or scaly as anything pulled out of the lake but it's hard to turn up one's nose at some fresh-caught pike or perch.  And yes, the kitchen is much more cozy than being out on the ice.

If you want to play with potato in your rye bread, this one is a pretty good choice.

The Finnish rye recipies I've seen that use potatoes seem to either scald the potatoes and ferment that or add riced potatoes to the final dough along with some syrup.

It's also nice to see there are still some parts of the world where you still have proper winter. I'm jealous.

That's a new one to me!  Potatoes in the final dough seems more commonplace than in the sour, yes.

This winter (the past couple of days excepted) has been comparatively mild.  There have been some decent snowfalls but each has been followed by a thaw, so there's less than an foot of snow on the ground.  We haven't even bothered to get our snowshoes out.  It's usually sometime in March that we get to the "Enough winter, already" stage but winter keeps going.

Yes, potatoes and rye are a good combination.