I made this a while ago but it wasn't entirely successful, turning out a bit "solid". The recipe calls for Austrian T960 flour which I think is the same as German T997.

The first time I made it I used home milled wholegrain rye sifted at #50. This time I had planned to use Shipton Mill T997 light rye, but it was out of stock and I was sent Doves Farm white rye as a substitute - a bit whiter, but close enough.

I now realise that it pays to take note of the rye flours used in these Austrian and German recipes. If T997 is specified and you use stoneground flour, even if sifted, you may well end up with a brick.

Anyway, this is the recipe I used: https://www.homebaking.at/suedtiroler-bauernbrot/

I tweaked the flour bill slightly and used:

Apart from that I pretty much followed the recipe. I did add 20ml extra water as bassinage as the dough looked like it would easily take it.

I was concerned that the overnight levain hadn't risen much, but the pH was 3.95, so I reckoned it was good to go.

Loaves were proofed in bannetons and dusted with white rye flour prior to scoring. 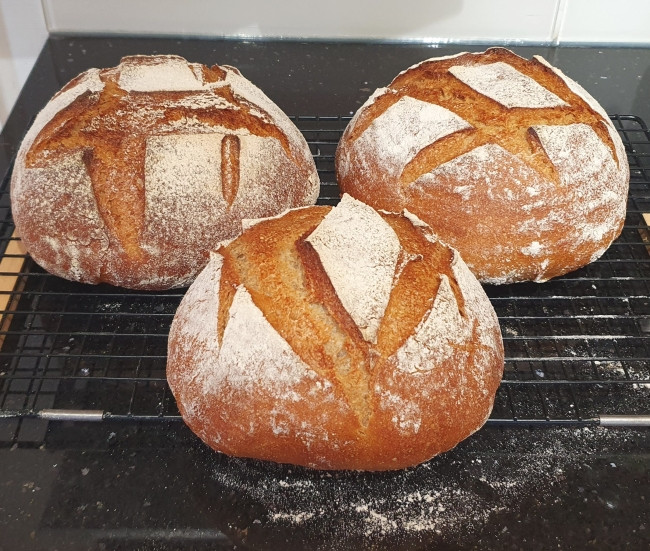 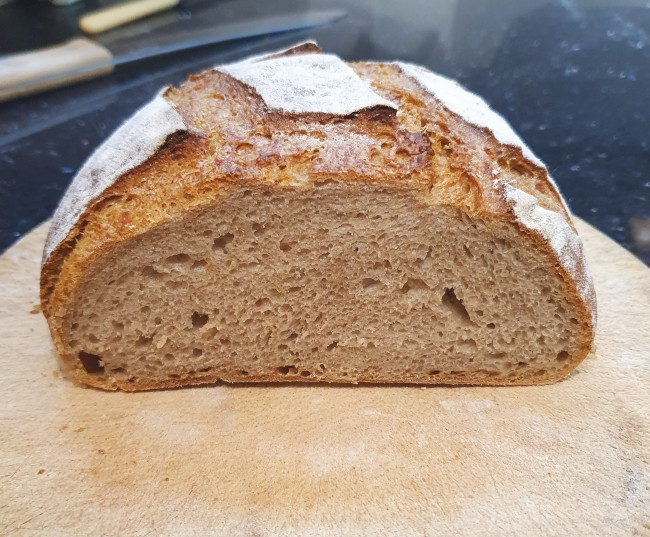 I'm pleased with how this bake turned out; the crust is nice and crispy and the crumb is soft and flexible for a rye bread - and with a bit of that elusive "shiney" appearance. Much better than I recall it last time I baked it.

So a whole grain rye sour and then a light rye/wheat main dough. Sounds like a nice balance. How's the flavour and texture? Scoring is cool with the flour setting off the loaf ruddiness.

Flavour is good; quite mild, but with a minor note of classic rye sour. Slightly more noticeable on the second day. Texture soft and easy eating. Toastable.

Gorgeous loaves and crumb, and the scoring pattern (diamond) is very nice.  I will have zero chance or replicating those flours, LOL, but it looks like you turned out some very eye-catching and tasty loaves.  Nice post!

If you upped it to 50%, you should include this bake on the Community Bake going on for rye!

Thanks Leigh, I'm sure other flours could be used, eg AP in place of T550, probably with a bit more water.

Yes, 10% short of the CB, perhaps I could request an accommodation ;-)

Beautiful baking Lance as usual.  Lovely crumb for 40% rye and I like the use of light rye to lighten the crumb.  You should ask for an accommodation for the CB.

Such a lovely bake Lance. Your delicious looking rye loaves will be most welcome on the community bake. We don't turn down such fine loaves. The more the merrier. No one should refrain from posting their rye bakes just because the rye % falls a bit under 50%. It was just a guide. I even posted a recommended Pumpernickel recipe which doesn't meet all the criteria because it enables people to bake Pumpernickel without the means of the traditional baking method which isn't always feasible.

And thanks Abe, regarding the CB - very flexible of you! I will add a link there to my Blog post.

How is that even possible at 62% hydration? How large are the loaves?

Thanks. The loaves were quite small - 620g, 600g and one about 420g. I think Dietmar kept the hydration low because the loaves were to be proofed freeform on baking paper.

I used bannetons and upped the hydration to 64%.

Clearly you did the right thing using pH as a guide as the outcome is just great. Quite a complicated mix of flours, some of them I don't know like the T550.

Thanks Jon. T550 is standard German 12% protein white bread flour. Not very strong and not very thirsty. I'm sure AP would work with a touch more water.