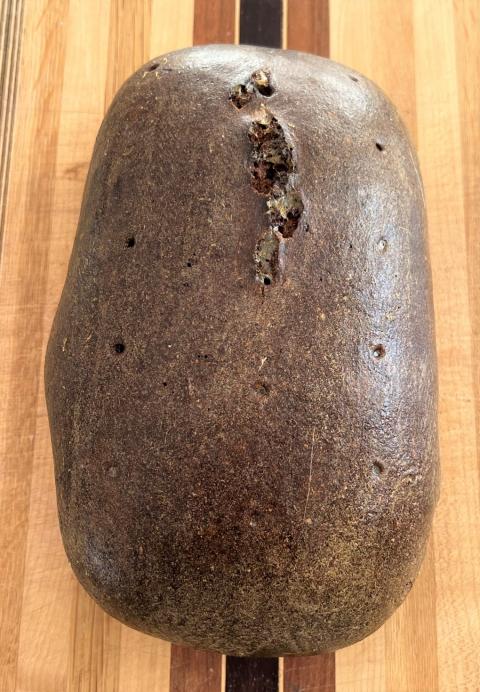 Yesterday I baked a Borodinsky loaf using the 1940 formula in the video by Rus Brot (thanks, Ilya, for posting that link in your blog).  In the final dough, I combined 100 grams of all-purpose flour with 50 grams of whole wheat flour (a substitution mentioned by Rus Brot) and otherwise pretty much followed the approach in the video.

Although there are some large time gaps in the process, I was kept busy at times cleaning up from the preceding step and preparing for the next step.  I wonder how they made this bread in the old country?

The final result was pleasing.  This was the first time I ever gelatinized cornstarch, and I could have waited a bit more toward the end of the bake to do that (which would have made the gelatin a little runnier when I brushed it on), but the shine is on the crust.  There was a crack in the top and another about two inches long on one lower side, but the appearance seemed good overall.  The crumb is dense, but not a brick.  The crust is a little tough but nicely chewy.  Over the next several days I am curious about whether the flavor will develop. 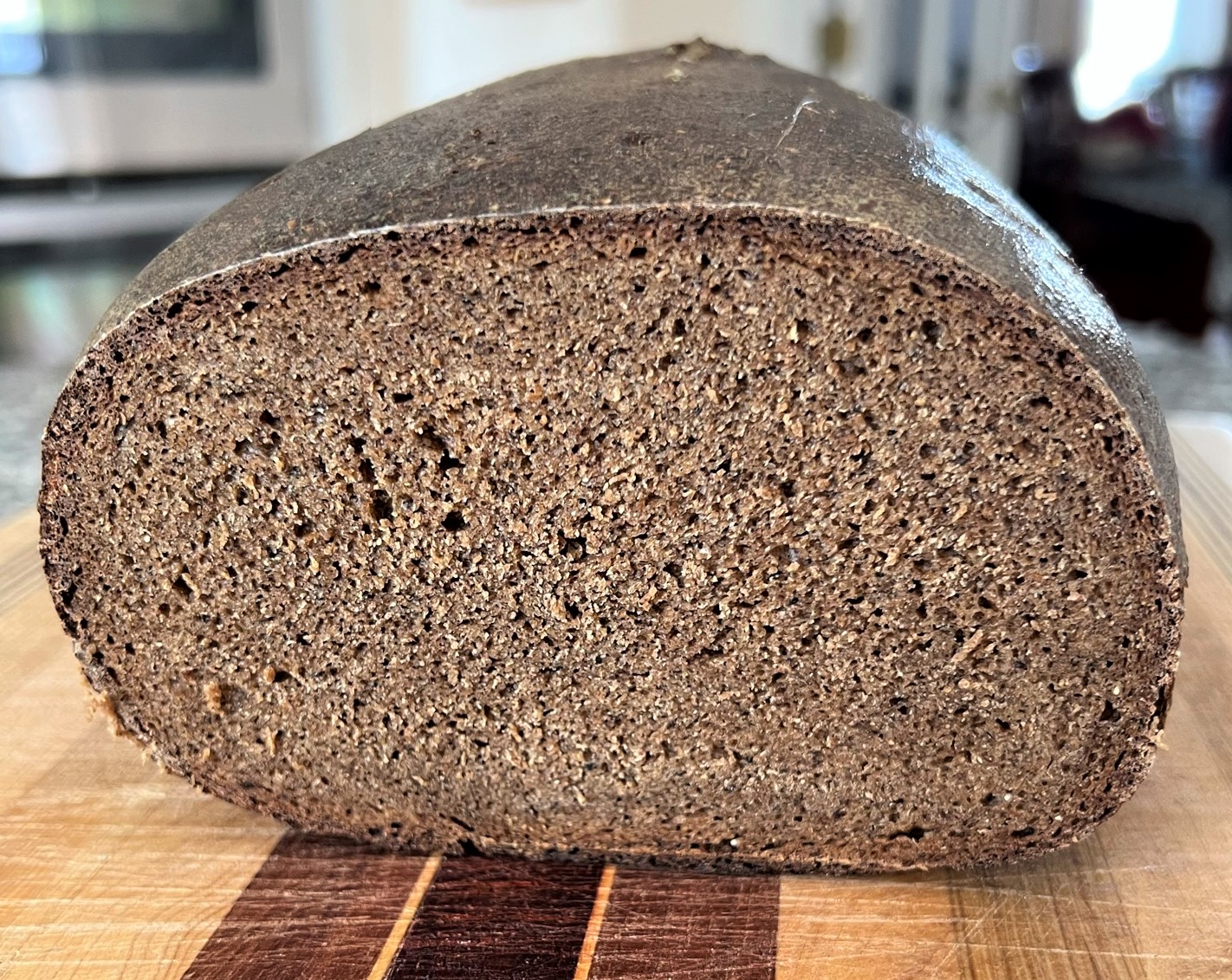 If anyone wants to bake this and save themselves the trouble of writing down all of the ingredients and steps from the Rus Brot video, let me know.  (But definitely watch that video -- several times perhaps -- if you are going to make this bread.)

Nice, very well done! Is this the first time you bake bread like that? How do you like the flavour? How long did you wait to cut it? Definitely don't fret over some cracks, it's definitely something that comes with practice, and hard to avoid.

I agree Rus Brot videos are great and very helpful to see how this sort of dough is handled!

Your praise is valued, especially with this type of bread.  Thanks indeed.  As you know from my comment in another post, I tried a recipe (from Stanley Ginsberg's site) for Lithuanian bread.  That was my first experience with this general type of dough.  That bread also had a stronger flavor than this one, but perhaps this one will acquire more flavor over the next few days.  In any event, I ordered more solod from the seller in Brooklyn and intend to make the Lithuanian bread and the Borodinsky again.

Have you tried the recipe for the Borodinsky Supreme?  I want to try it too.  These breads are such a contrast to the wheat flour breads that I usually bake.

I watched the Rus Brot video... wow he is so strict. I seem to remember comments like "don't even try unless...."

Thanks for the compliment.

My only deviations from the Rus Brot video were:

(a) I maintain a Tartine starter (100% hydration fed with a 50/50 mix of all-purpose and whole wheat) and do not maintain a rye starter, so the night before the bake I combined 50 grams of my starter, 120 grams of whole rye flour, and 84 grams of water to get the 250 grams of mature starter that I needed,

(d) the scald did not cool all the way to 95F, but I figured that the addition of the 180 ml of water would be sufficient;  I was concerned about cooking the starter, and did let the scald cool for twenty minutes -- that and the cool water and the air from mixing probably brought the overall temperature down before I added the sourdough starter,

(e) as already indicated, I used a combination of all-purpose flour and whole wheat flour to approximate the Russian flour in the final dough,

(f) the dough was expanding in the Brod & Taylor proofer while in the loaf pan, and I cut the proofing to 45 minutes rather than Rus Brot's 60 minutes.

I should also comment that my flour and water paste was thinner than what he made in the video, so the next time I will try to thicken it better (probably add water to the flour a little at a time rather than all at once).

Other than these things, I followed his guidelines exactly.

This is a neat process to do, and the bread is tasty too.  The process is so different from making a wheat flour bread.

Thanks for the details. Ilya had pointed out that my scald (55c) was too low. I see yours is high (71c). I wonder what the practical impact is.

I should get a decent thermometer to measure liquid temps. I killed one awhile back and never replaced it.

Borodinsky was def my favourite of the 4 ryes I've made. It would be interesting to compare Rus Brot to Rye Baker.

The scald does something to the red rye malt, and my impression is that sufficient heat is necessary.  Rus Brot does his in two stages, 100 ml of water at 140F and 250 ml at 212F.

Definitely get a Thermapen.  They occasionally have sales, so look for that and get the top model, which is well worth the price.  I use it for a variety of things and not just baking bread.  You can check the temperature of meat and fish, heating liquids to a given temperature (such as pecan pie filling!), and anything else that you need to know the temperature of quickly.

Beautiful bake Ted.  One of these days I’ll have to try these much more complex rye bakes than I have to date.  I’ve only done two 100% rye loaves so far.  Some of the ingredients needed are a bit hard to find.  Someday I’ll need to make the effort to source them.  In the meantime I will enjoy looking the handsome loaf you baked up.

Benny, thanks for your praise.  You really should bake one of these.  The two ingredients that I had to find were the red rye malt and the malt extract.  The red rye malt is available online from a seller in Brooklyn who lists on eBay.  The malt extract is probably better described as malt syrup if you go to your local grocery stores.  One chain did not have it (or I could not find it), and another had it in the baking section.  For the final dough you can use a combination of all-purpose flour and whole wheat flour as I indicated elsewhere in this post.

My Borodinsky. Praise be to Ilya for the red rye malt and the encouragement!

It's a rye like no other. Full of flavor that keeps getting deeper the longer you keep it around. 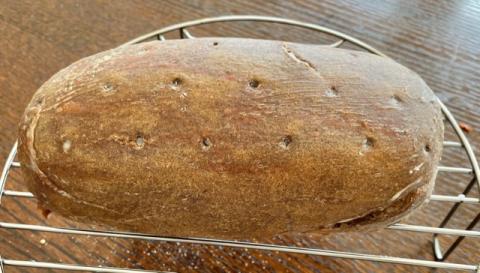 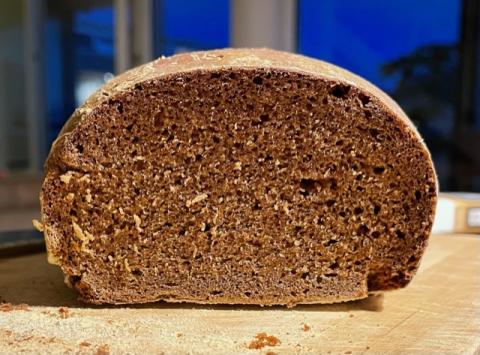 Rob that looks amazing and sounds like the flavour is wonderful as well.  Great collaboration with Ilya.  Well done.