My wife asked for a bostock dessert for the holidays. A bostock seems to be slices of day-old brioche, brushed with simple syrup, spread with frangipane and almond slices, and baked again. A frangipane is almond meal with sugar, eggs and butter.

In the past I had made her cousins of that dessert such as an almond croissant (same process but with a buttery croissant... too rich for us), and a galette des rois (the David Leibovitz version with an orange zest frangipane). I have seen some people put jam on their bostock, but that is taking it into bakewell tart territory. Might still be worth trying though as it would round out the flavour profile.

EDIT: fresh vanilla in the frangipane + freshly-grated nutmeg on the finished bostock really brought the flavours together for me. Highly recommended

I needed a brioche bread. I went with Benny's Hokkaido milk bread but I used honey in the levain, all AP flour, and I beat in softened butter (no melting).

Both bostock sources were adapted from David Leibovitz. I riffed on his bostock but had no interest in using almond paste.

So I used his galette des rois frangipane instead and doubled the orange zest. Recipes for frangipane call for almond flavouring but I don't care for it or extracts in general. I left it out. Next time I would add something to compliment the orange zest. NOTE: freshly-grated nutmeg on top does the trick

First, Start the Milk Bread A Few Days Ahead

Here are all the parts of the milk bread. From front left: Butter, dry ingredients, levain, tangzhong roux, wet ingredients.

I started early so I could build the levain over 7 hrs, then build the dough and leave it overnight, then cool in the fridge, then shape, then proof. and bake, then leave the bread overnight to make bostock. 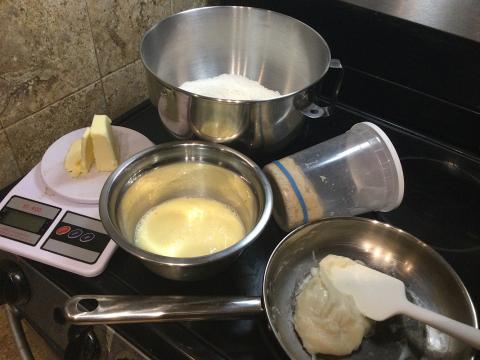 Here is the milk bread dough after mixing. I ran it slow in the Kitchenaid. I added soft butter after a few minutes of mixing.  I ran it the 15 minutes to get the smooth dough. 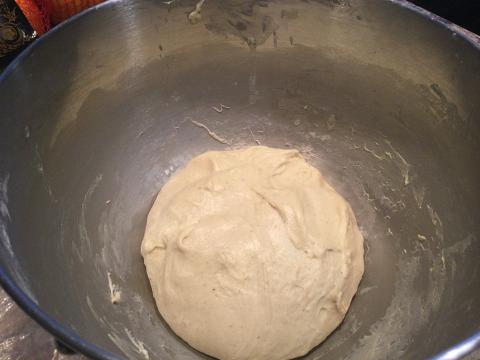 Here is the dough after sitting out all night. Probably 14 hrs. I then put it in the fridge to cool and ease shaping. After making and eating pancakes (incidentally my best ever... not sure if it was because I used the egg milk wash from this recipe in them) I returned to work. 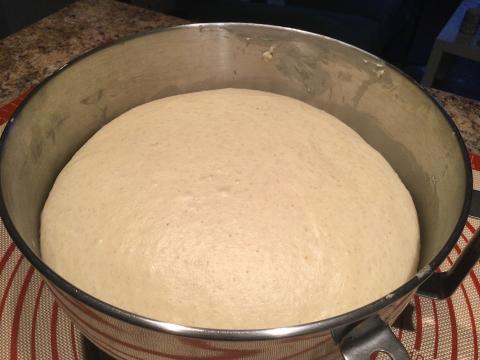 Here I've divided the cooled dough into 4 and shaped into smooth balls using the bun technique (make a flat square, fold in corners, turn over, then grab it with a claw hand and roll the dough bottom against the counter) 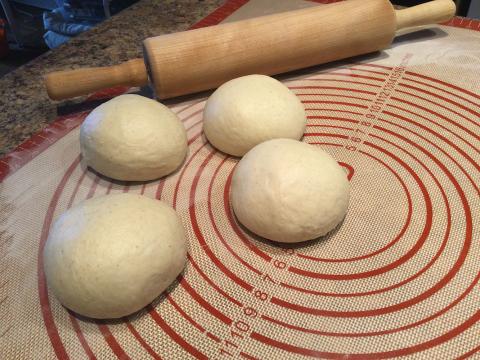 I rolled the balls flat into rectangles, letterfolded them, rolled them flat again, then rolled them up tightly. I placed them in a buttered bread pan. $4 from Dollarama. 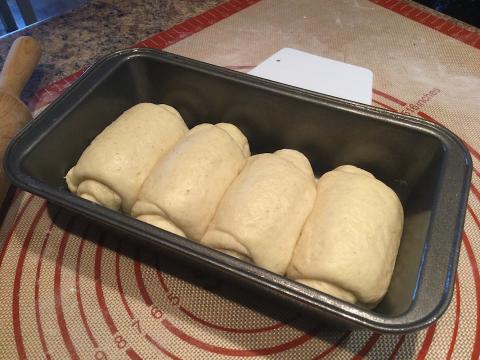 Here the dough has proofed for 4 hours. I could've let it go longer for more loft. However, I want somewhat dense bread to soak up bostock syrup and support the frangipane, 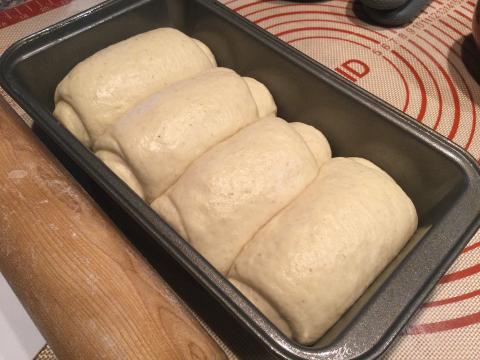 Here is the finished milk bread loaf, glossy from the milk-egg wash. I let the loaf cool then bagged it overnight, 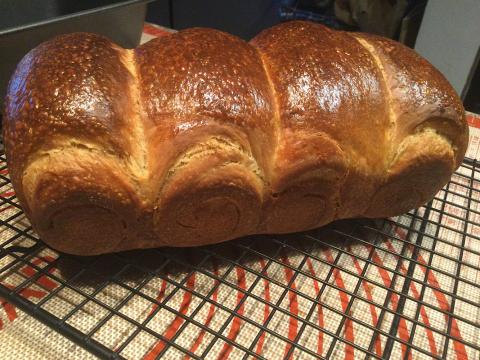 Next, Onto the Bostock

Now I had my day-old bread, I was ready for bostock. You can see the fluffy crumb here, and that the crust darkened more by the next day. 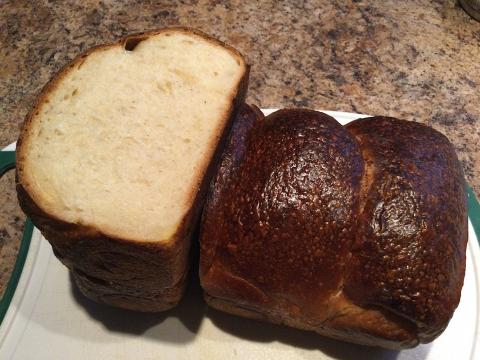 Here are all the pieces of the puzzle for bostock. From the top middle: Yellowish frangipane with orange zest, processed sugar, rum and eggs. Clear simple syrup with rum. Slices of milk bread. Sliced almonds. NOTE: I added 1/3 fresh vanilla pod to frangipane... improved the flavour. NOTE: I also tried with thinner slices of bread and preferred that more. 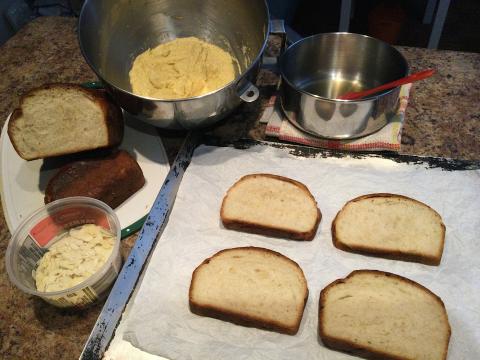 Here are the bostock steps: brush generous amounts of syrup on bread, spread on generous layer of frangipane, add sliced almonds. NOTE: really soak in the syrup on the bread like Liebovitz says. Makes a big difference. 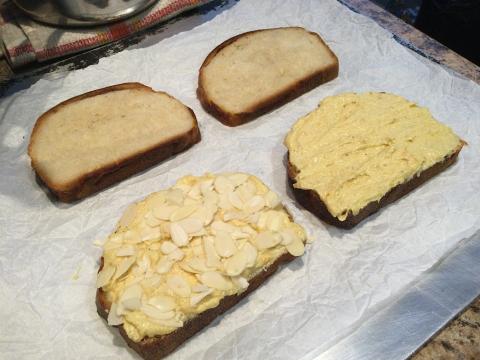 Here are the bostock after 12 mins at 425f. Glorious browning. NOTE: grate nutmeg over these before serving to tie the flavours together 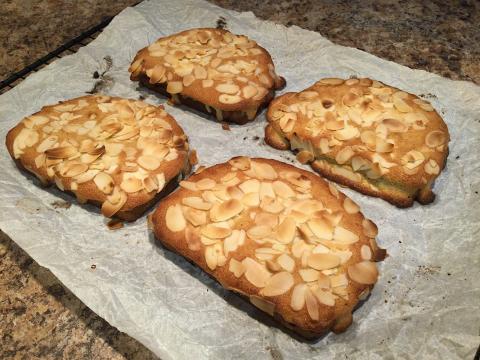 The bread was delicious. Frangipane had a lovely fresh orange flavour I enjoyed a lot. Nice almond crunch.

I'm thinking to try some fresh nutmeg on top. I might tweak to add a bit more salt to the frangipane. I did throw some old vanilla pods (emptied) into the sugar when I processed into fine powder. I then strained out the pods... I got vanilla essence that way but I might put fresh vanilla in instead.

UPDATE: I made a second set. I added fresh vanilla (1/3 pod) to frangipane, very generously spread/soaked the bread with the rum syrup, and grated fresh nutmeg on top. Wow. That's the version I like! 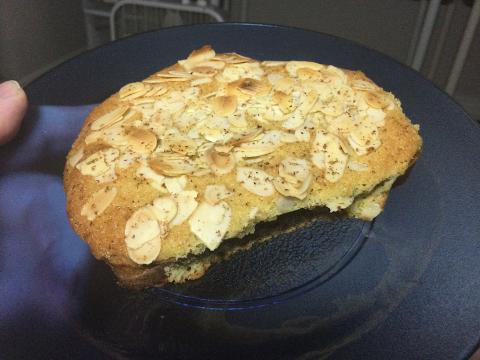 Wowza!  What a process but it looks like it was well worth it.  I also love orange (well, anything citrus) and almond anything with fruit...can only imagine the smells coming out of your oven while this was baking.  What an interesting bake and sounds delicious as well.

As you mentioned, vanilla would be a good compliment I think.  I'm also a little picky about what extracts I use.  I actually have tried to make my own vanilla extract this winter after buying a pack of whole vanilla pods.  The experiment should be complete in another 3 months (3 months down so far); added about 20 slit pods to a bottle of vodka in a large glass jar and give it a swirl every few days.  My older pods I cut up and put in some sugar to make vanilla sugar.  It's great in coffee or tea, or with just a touch sprinkled over fruit salad or other fruit bakes...very subtle but there.   I hadn't thought to blitz the whole batch before though...good idea.

Thanks for posting such an interesting bake!  I learn something new here all the time!

I tried a second round with fresh vanilla in the frangipane and nutmeg grated on top and it tasted so much more balanced. Brought out the "wow" I was hoping for.

I hope your extracts work out. I got these fat, juicy Tahitian vanilla pods off Amazon and just love using them. They stay moist sealed up.

Thank you for posting this! Souns like a great way to use up leftover brioche.

Yup. And the orange-vanilla-nutmeg is a light and refreshing version. Hope you get to try it some time.

in Suas' book and he says it can be used as a filling in a laminated brioche. I wonder if that would be too much as a base for bostock.

Wonderful job on the Hokkaido milk bread David, I’m pleased that you enjoyed the bread.  The bostock looks and sounds delicious, I’ll have to try making it sometime since I seem to be making these milk breads often enough.

I hope you give it a try. I think bostock is a bit of a "canvas" you can paint your preferred flavour palette onto.

I loved the rum syrup and orange zest-fresh vanilla-nutmeg from my second round.

But you could choose a different palette to suit your preferences.

Nice to see the long awaited bostock post  Simply brilliant David, and you've got me salivating just reading it!

Am curious what you had against almond paste as I recall photos of it from David Leibovitz's post? I guess the almond meal in the frangipane has the same taste though?

Thanks. I prefer to make things from scratch so I have control over sweetness etc. Making frangipane from almond meal meant I could control the sweetness and flavour. Also, I like natural almond but not strong almond "flavouring" if that makes any sense.