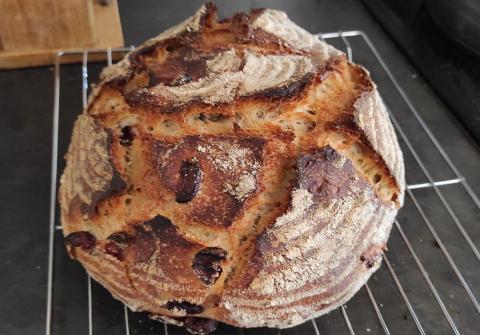 Cherry breads make me think of cherry cake. I do love a good Madeira cake. They're super sweet and very much a cake. And yet, we had a box of cherries in the fridge, probably too much for us to eat. Which made them just too tempting to use as a regular inclusion in a bread, not a cake.

It was surprising to me, but this worked quite well. I really enjoyed eating this bread, and although the cherries lost some of their flavour they were still great to eat in a bread, especially when they were used together with a pecan inclusion.

This is also the first bread with both yeast water and sourdough that worked for me (previously I'd tried yeast water as the liquid for feeding the sourdough which wasn't all that different to using just plain water). This time I made both a yeast water build and a sourdough levain at the same time and used them both 9 hours later in the final dough. 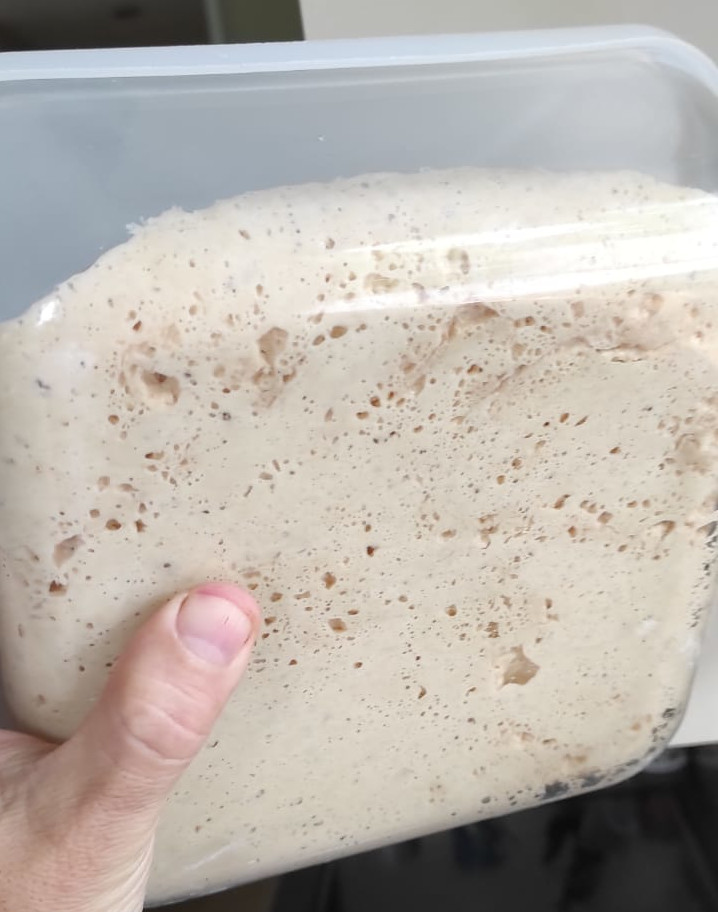 These two photographs taken through the bottom of the glass containers illustrate the different degrees of development of these two preferments after this period of time (photos are actually from a later bread, but looked very similar for this loaf). Clearly the yeast water build (top pic) is much more advanced than the sourdough levain (bottom pic), which still looks relatively 'young' even after 9 hours. I'm assuming the levain was young because of the high ratio feed (1:8:12, starter:water:flour) and also that it was a stiff starter.

Using the two preferments together seems to have been a success. Fermentation was fast and the total time from adding the preferments to baking was 3 hours (2 hours bulk plus 1 hour final proof). The aliquot showed 30% at end of bulk and 80% at time of baking.

This was a lovely quick bread to make. There was good oven spring and a crispy crust with an interesting pattern from allowing the seams to open.

Gorgeous cracked loaf... moist fluffy crumb. Fruit seems well integrated without holes around it, Were the additions laminated in? Sometimes a flavour enhancer is to soak in some lemon juice.

What's the benefit of combining the two leavening techniques? What do you notice about it?

It was mostly an experiment, but I've repeated it since as it seems to work well.

Basically, I think the yeast water acts as a helper to the sourdough and makes it more dependable, similar to how some recipes (eg Reinhardt) use commercial yeast with sourdough.

But the jury is still out and I might try change my mind if this method doesn't always offer benefit.

I love the look of this bread, inside and outside. The experiment of using the sourdough and yeast water preferments is intriguing. Great result.

I regularly use more than 1 levain. I have posted many breads that have YW as the liquid and then I do a couple levains with different flours as well so 3 ways to get the bread up and have lots of flavors . It's always a surprise as to how it will turn out but it is always successful. Love your natural break as well. I don't score breads as I like to let it do its own thing as well. Lovely using fresh cherries I will have to try that. Next time toss in some chocolate bits as well !!!  Will give your formula a try when we next have cherries. c

Thanks for the additional feedback about using more than one levain. (Dark) chocolate and cherry sounds great too!

Beautiful loaf and crumb!  I love the use of cherries and nuts but have never used fresh fruit before, always dried.  Looks like a very successful and tasty bake, and that you got very even distribution of your inclusions.  Did you mix in initially or laminate them in at some point?  I'll have to do some more research on yeast water...haven't ventured into that realm yet.  Thanks for posting!

Thanks for the kind comment. I love fresh fruit now, used to always try and make a compote of it first, but way easier to just use it like it is. Laminated in the inclusions. There is a community bake here for yeast water that got me started: https://www.thefreshloaf.com/node/60872/community-bake-hamelmans-swiss-farmhouse-part-1-yeast-water

Jon that is a stunning bake both inside and out.  I’m intrigued by your use of both a yeast water and sourdough levain.  One of these days I’ll have to revive my grape yeast water and see if it can leaven a bread.  In the meantime I can enjoy the photos of your bake.

I await the day of the Benny YW bake!

This sounds great toasted for breakfast.  No need to add anything.