One of the things I enjoy about Christmas is the opportunity to bake without having to ask myself “How are we going to eat all of this?”  I can have fun baking and give the finished goods away as Christmas presents.  Yes, I know, bread can be gifted any day of the year; it somehow seems even more enjoyable this time of year. 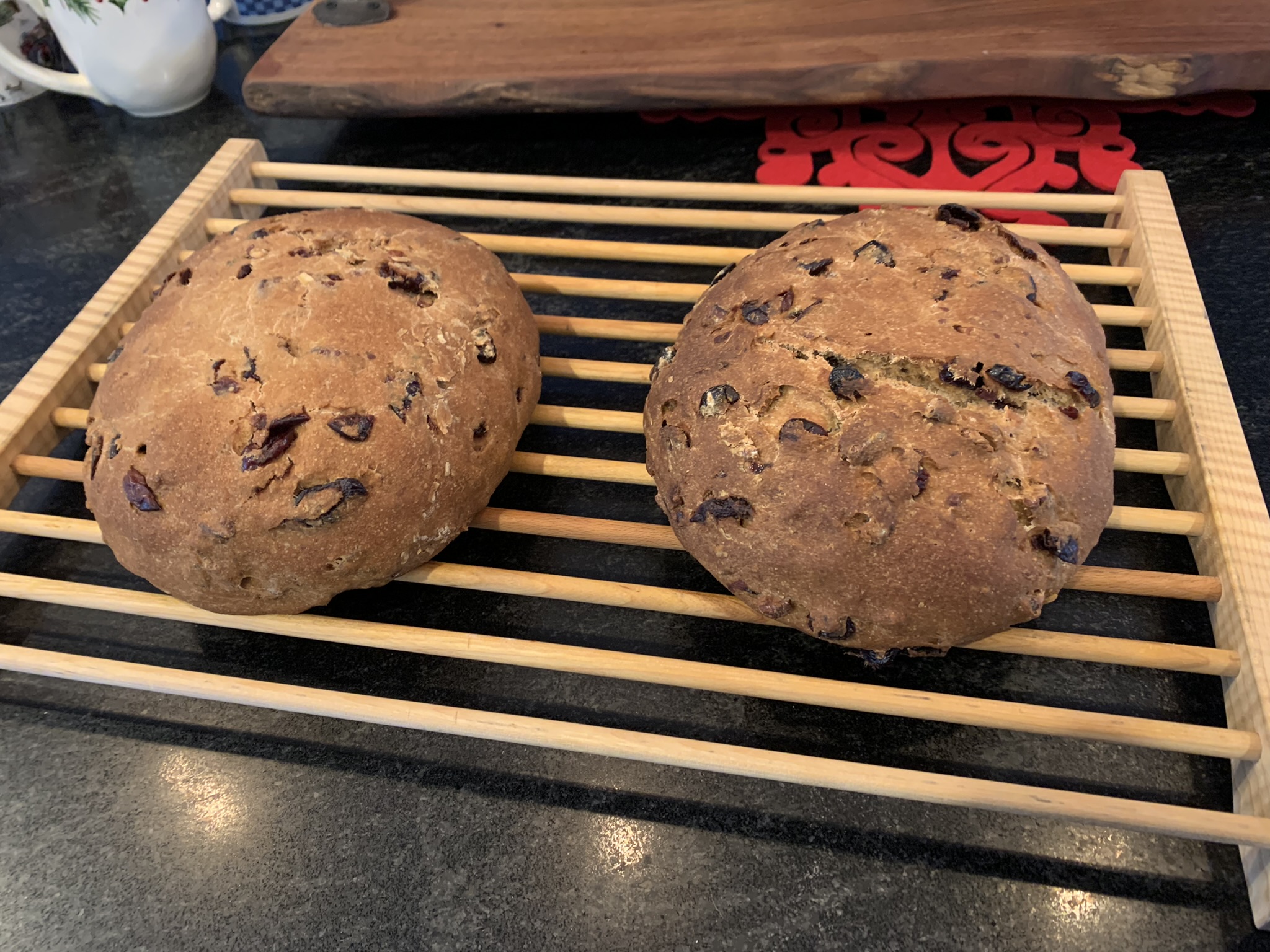 This bread from the King Arthur Whole Grain Baking cookbook went to my brother and my sister who live nearby.  It is fragrant with orange zest, orange juice, dried cranberries, and toasted pecans.  It smelled so good in the dough stage that I pinched off a small piece for a bun before shaping the loaves.  That gave my wife and I a chance to sample it, too. 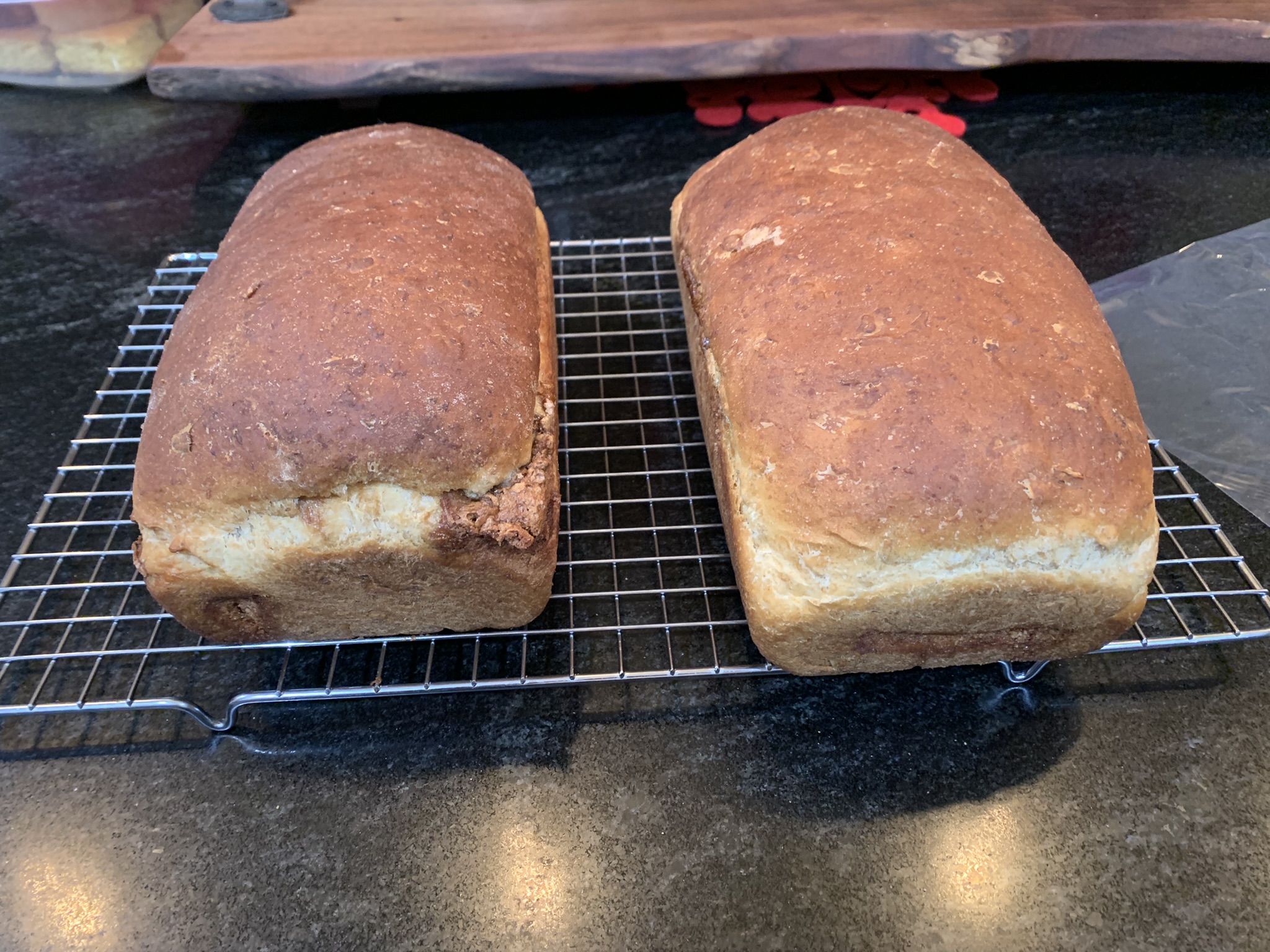 Granted, my list of favorite breads would probably require a couple of pages, but this bread would be there.  The cinnamon swirl makes for some delightful toast.  Two of my nieces will receive these this afternoon when they arrive for a cookie baking extravaganza.  This bread is also from the King Arthur Whole Grain Baking cookbook. 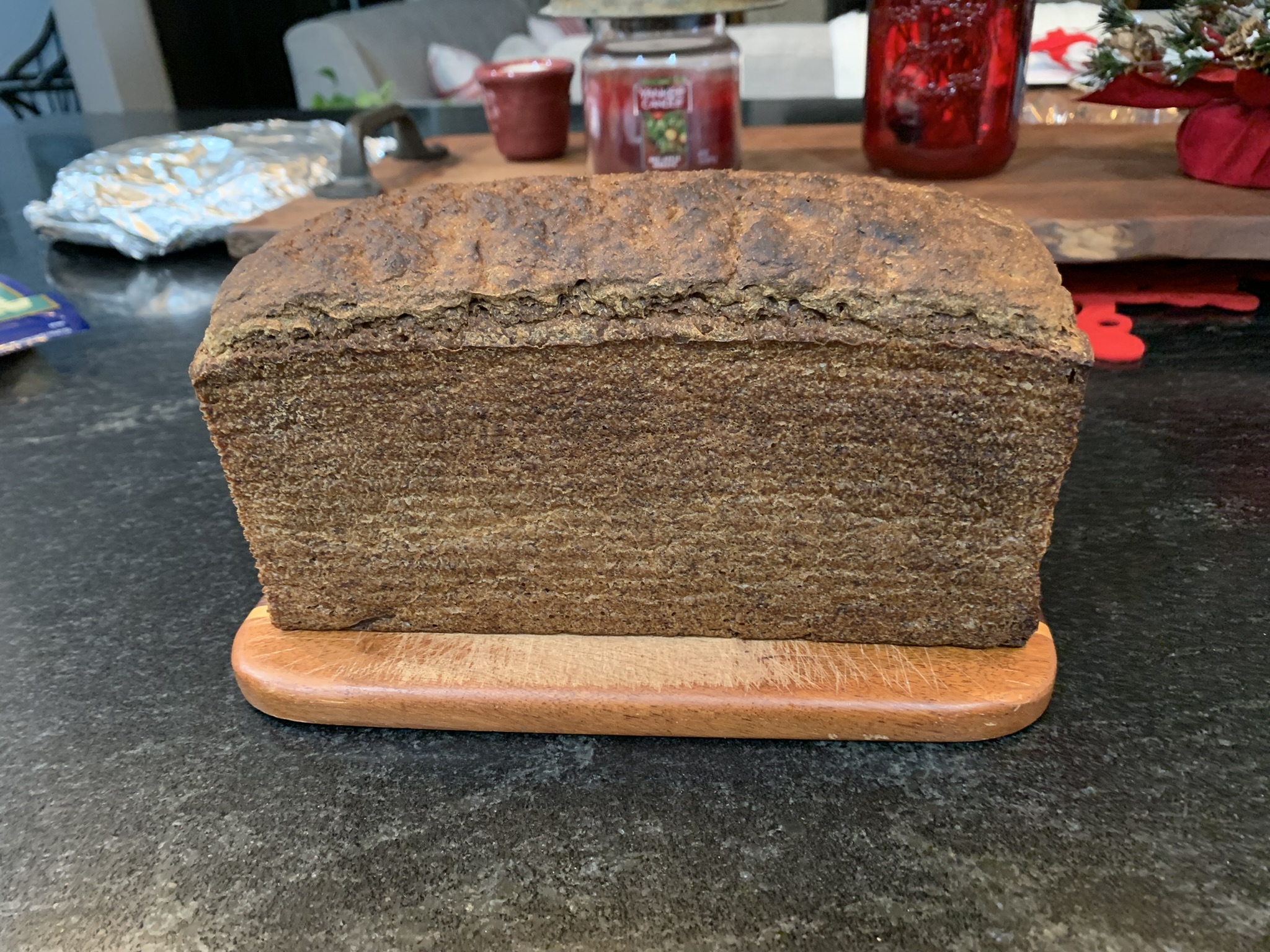 This one from The Rye Baker is for us.  I've been hankering for some rye bread lately and this one looked interesting.  It's 50/50 rye flour and bread flour.  Flavor for this bread is entirely from the flour and fermentation; there are no inclusions such as spices or seeds.  The first sponge matures overnight.  The second sponge moves faster during the morning of the next day.  The final dough (batter, really) is fermented in bulk, then again after it is poured into the bread pan.  One different feature of this bread is that the bake begins in a cold oven. 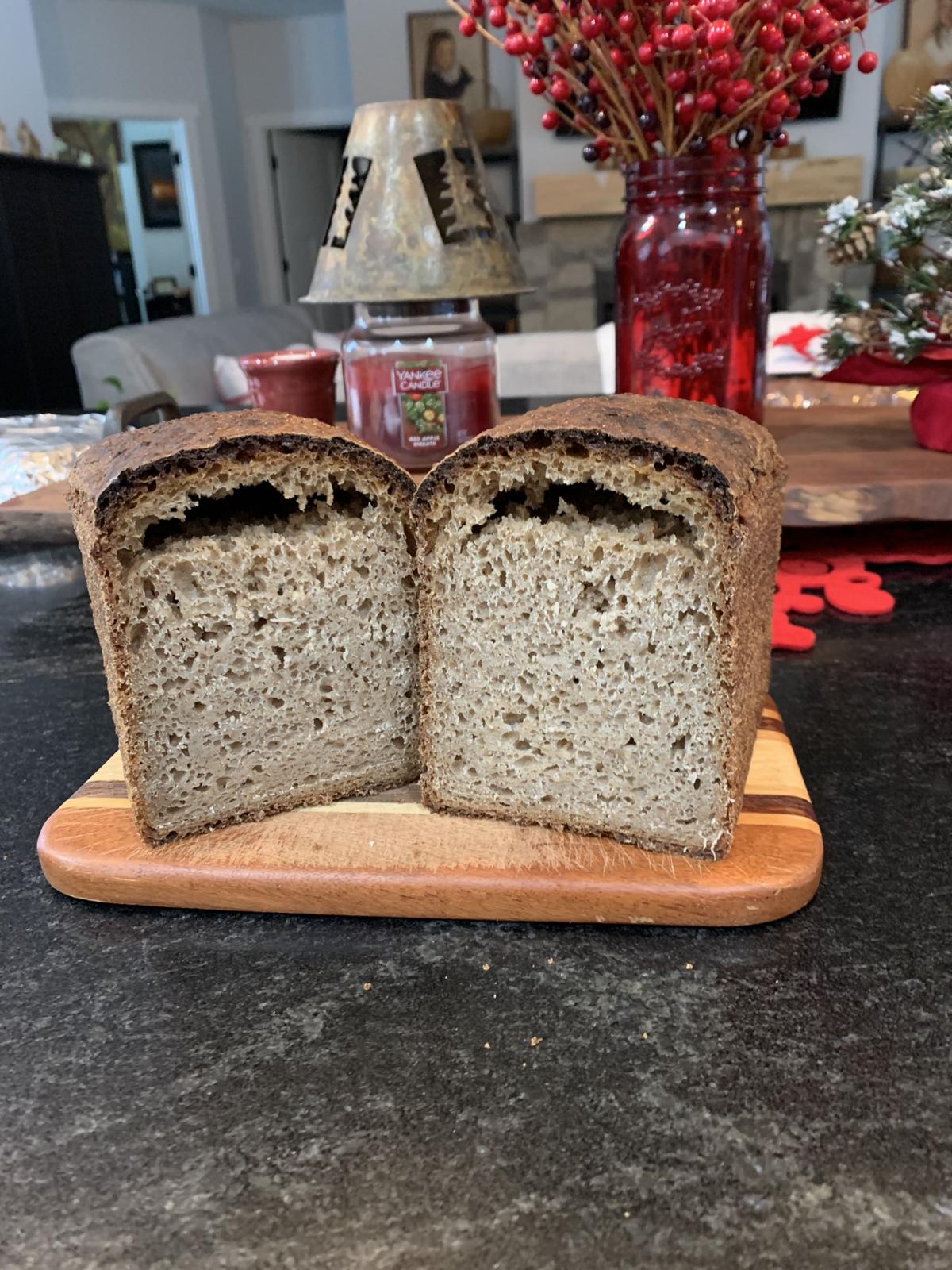 Unfortunately, I let the final proof go 15-20 minutes longer than it should and wound up with a cavern at the top of the loaf.  Docking wasn’t called for but it might have helped.  Maybe.  Anyway, the bread tastes wonderfully of rye, which is exactly what I wanted.

All three of these look very interesting, and I have to say I'm salivating at the thought of the cranberry/orange/pecan combo!

Of the three, though, I think I'll have to try the Frisian black bread......after all, my mom is descended from sea captains on the Frisian island of Fohr.  Seems reasonable that the hearty folk who live on that small island, would have a hearty style of bread such as this one.

Thanks for sending me down a little ancestral bread path, Paul! :)

that works so well in combination.  Adding pecans pushes that chemistry even further.

It’s interesting to hear that you find a familial connection for the Frisian rye.  I suspect that you will enjoy the bread when you make it.

Wonderful bakes Paul, I am certain the recipients of these fine gifts will really enjoy them.  The sweet rolls I made recently have similar flavours to your first pair of breads with cranberry orange and walnut.  Great flavours for the holidays.  That Frisian Black bread interests me, I’ll have to have a look at it on the Rye Baker website.

There’s something about homemade bread that pushes a lot of buttons in people; some sensory, some memories, and some deeper stirrings that I can’t adequately label.  Gratitude, of course, for receiving something that the giver has poured a part of themselves into.  Fragrance and flavor pique an immediate enjoyment, followed by nostalgia and memories of people and times past.  It’s heady stuff.

I haven’t looked at the Rye Baker website to see if this bread is featured there.  It is included in the book, which is where I found it.

I had a look and couldn’t find it on the website.  If you don’t mind sharing it I’d love to see the recipe but understand if you don’t.

Do you have the book?  If not I highly recommend it.  I was a recipe tester for it and it was a blast.

I don’t have the book.  One of these I’ll by that, I’ll need to do a bit more baking with rye to see if in fact I tolerate it or not before buying that book.

Mix, cover, ferment overnight (10-12 hours) at room temperature (68-72F)  It should be bubbly and approximately double in volume.

Combine the flours and water with the Stage 1 sponge.  Cover and ferment at room temperature until bubbly and expanded, 6-8 hours.

Combine all final dough ingredients.  Mix by hand or machine until the dough is like a heavy batter, 6-8 minutes.  Cover and ferment at room temperature until bubbles appear on the surface, 30-45 minutes.

Grease a 9x4x4 Pullman pan (recommended) or a 9x5 loaf pan thoroughly.  Pour the dough/batter into the pan and smooth the top.  Place in a cold oven and proof until the dough approaches the rim of the pan, 30-45 minutes.

Heat the oven to 460F.  After the oven reaches temperature, bake for an additional 20 minutes.  Lower the temperature to 375F and continue baking for another 75-80 minutes.  The loaf is done when the internal temperature reaches at leas 198F.  Remove from pan and cool on a rack.  Let stand for at least 24 hours before slicing.

Note: I put the loaf in a plastic bag when it reached room temperature.  The crust gradually softened over the next 24-36 hours.  It had been quite hard initially but the time in the plastic bag was enough to render it chewy instead of armor-plated.  Even after the long wait to slice into the bread, the crumb is slightly sticky; leaving a light residue on the knife blade.

Thank you for taking the time to type and post this for those of us without the book Paul, it is really appreciated.

I hope you enjoy this holiday season.

Thank you for taking the time to write this up, Paul!  I think I can see from your picture of this loaf that you did not cover the Pullman pan?  Just wanted to verify.

Correct, I did not use the Pullman pan lid.  Given the amount of moisture in the dough, I think the lid might keep some of that water from baking out.  The finished bread is very moist, as is.

I’m sure your family will love these gifts.  They all sound fantastic.  Even though you had some “extra room at the inn” with the rye bread I’m sure that won’t stop your from enjoying it.  I will have to give that one a try for sure.  Was it in the book or from his site?

Seems fitting for this time of year.  Maybe I’ll declare it a feature, instead of a bug.

Does anyone think I can approximate a medium rye by sifting whole rye with a #40 sieve?

I used whole rye flour without sifting, since I use a stone mill to grind the grain.  In the case of this recipe, I wonder if medium rye might be more of a texture descriptor than an extraction descriptor.