Ciabatta - how many things can I change at once,

Ciabatta - how many things can I change at once, 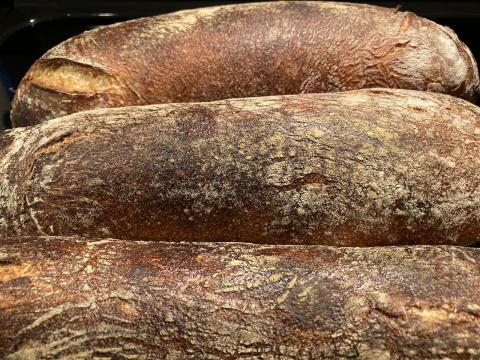 and still kinda get away with it?  Answer - a lot.

Background is rooted, but barely, in my recent enjoyment of an 80% PFF biga version.  I was refreshing the regularly neglected 75% mixed flour levain along with the workhorse 100% AP levain when I suddenly had this "brilliant" idea.  Why not change a few things at once so that I won't know what may have worked and what didn't?

Things that changed, some not necessarily on purpose:

Once the dough had BF'ed the remainder was biznez as usual, although my shaping should have been better.  I also must not have paid attention during the period in life whereby one learns to successfully eyeball a block of dough and get close to a three-way even divide.

Despite my dark thought that I had no idea what might or might not work due to myriad changes listed above, the bake came out just fine with two distinct differences.  The loaves took on a sheen that is pretty uncharacteristic for my own ciabatta bakes, but I like the look.  The other and odder difference is how closed the crumb is for a ciabatta.

Considering how things were off during the process, I'm fine with the results however odd, and the bread is as tasty as ever.  I'd like to try this again with the obvious corrections applied. 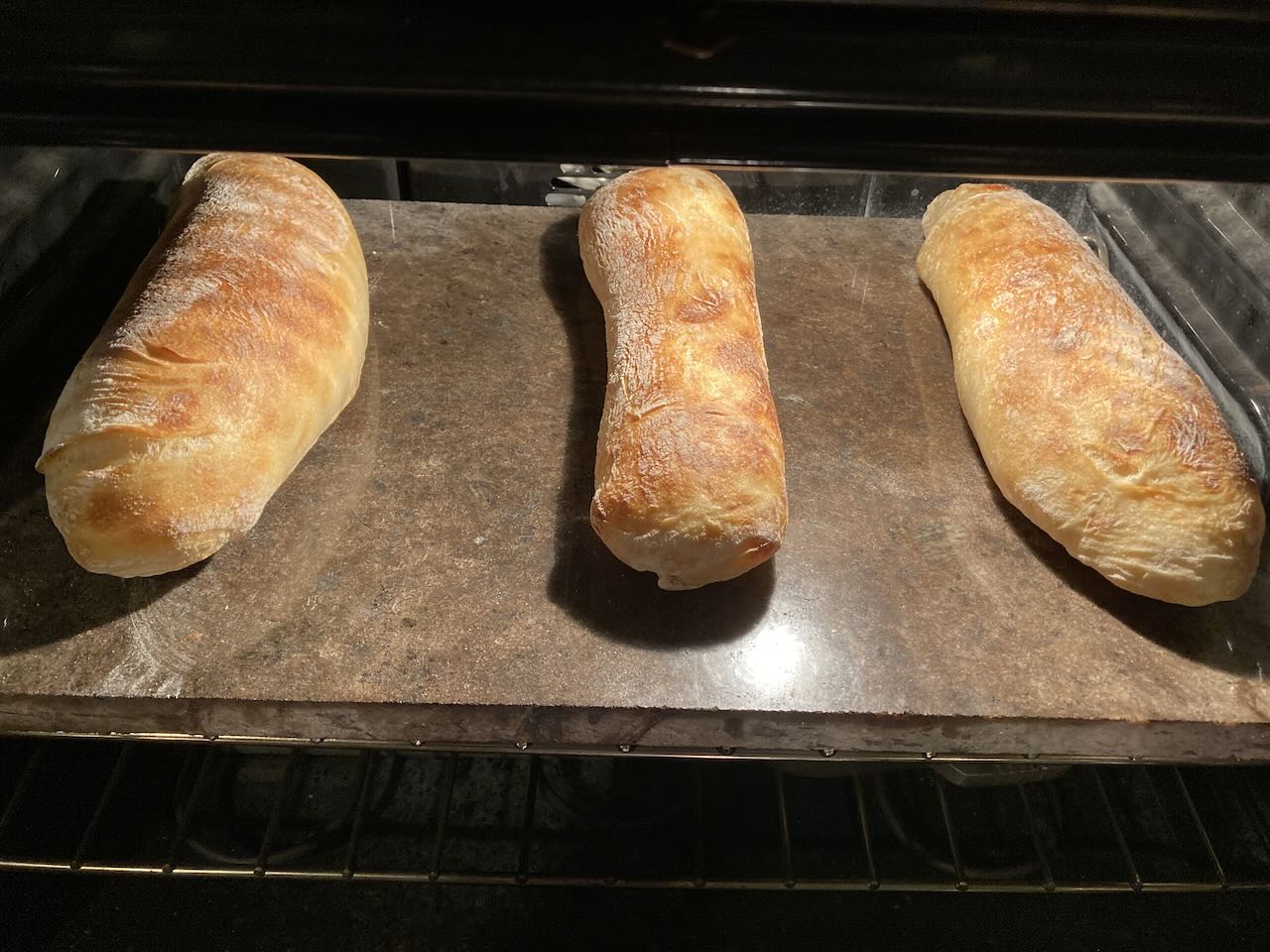 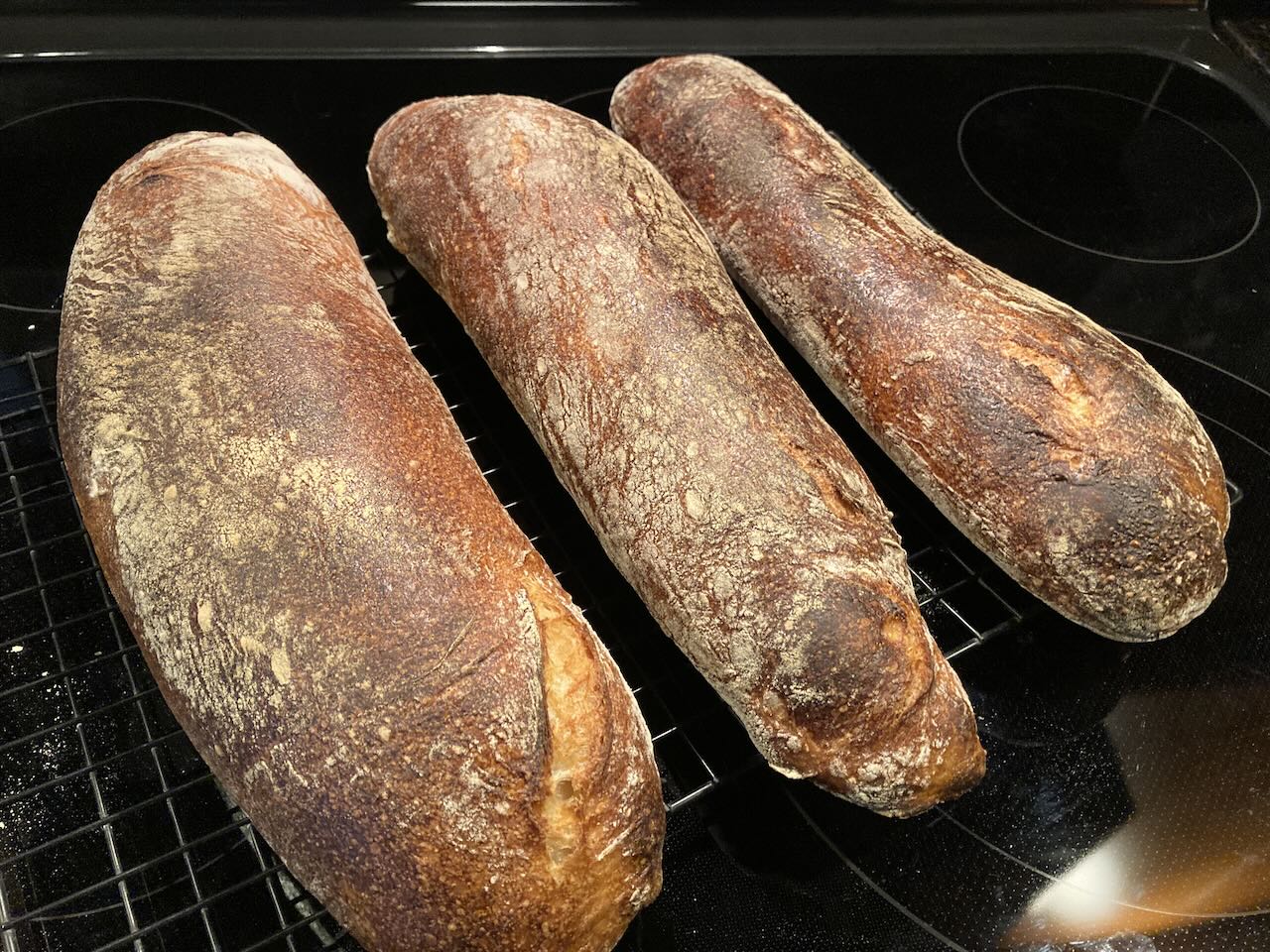 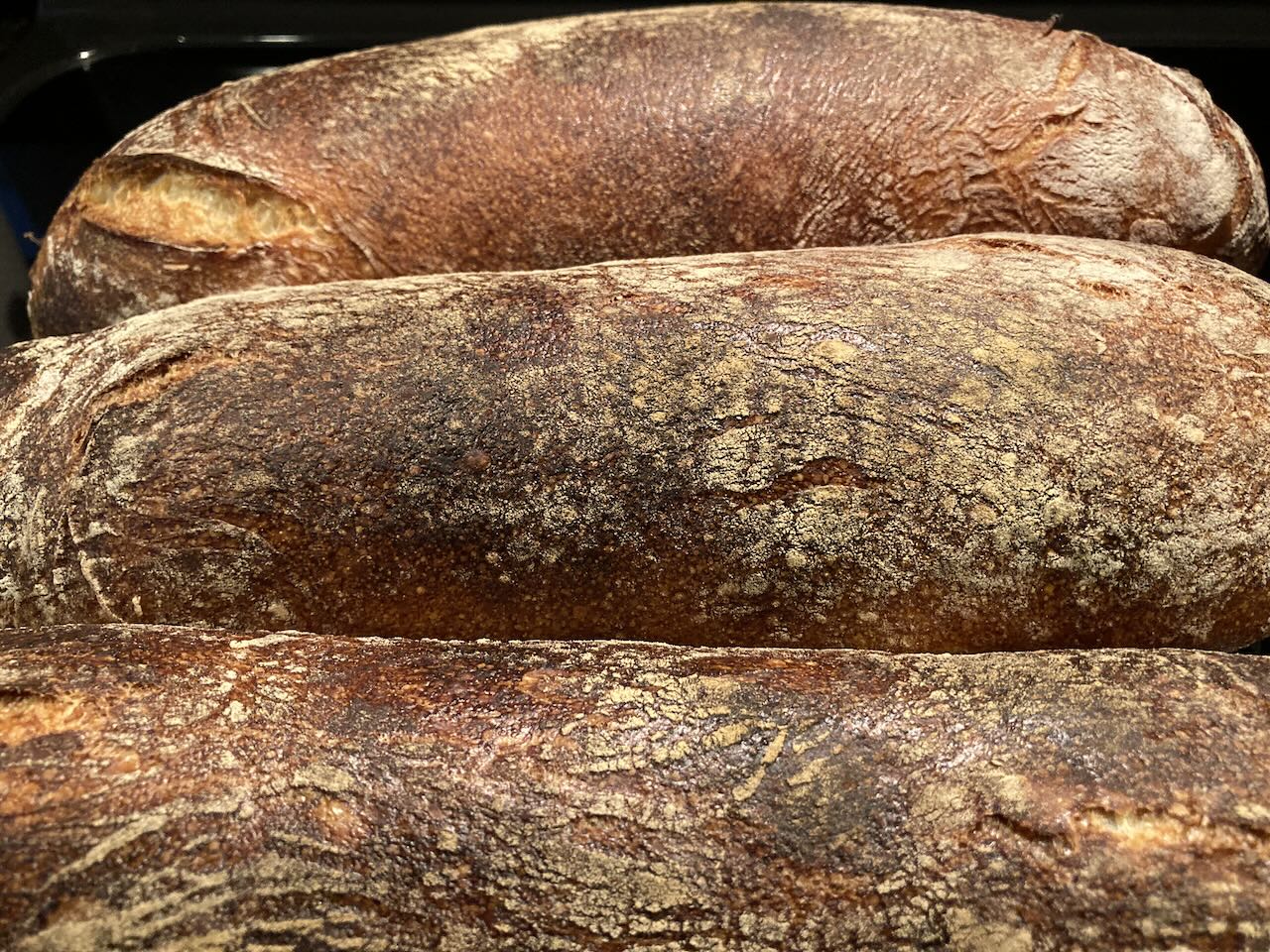 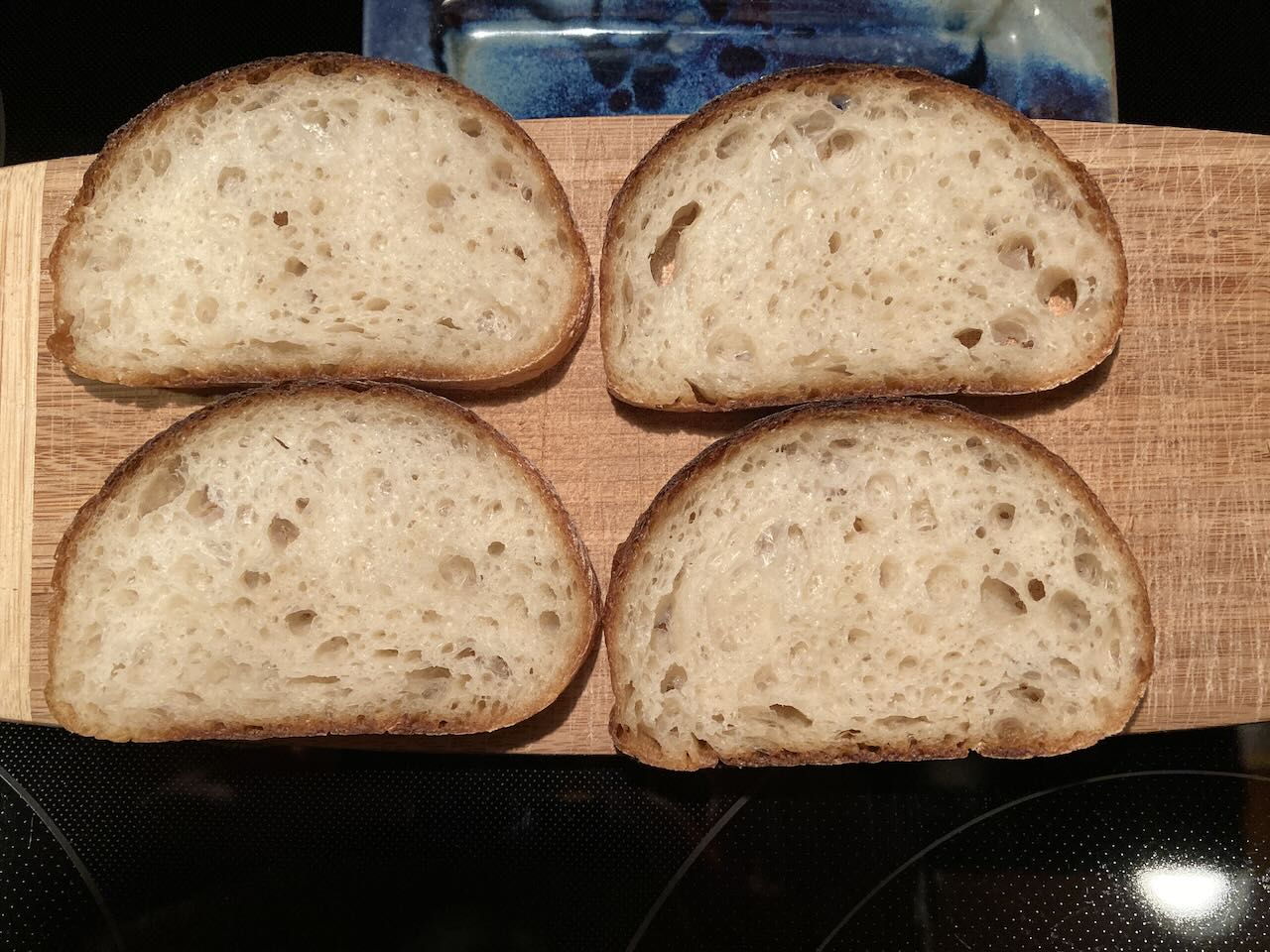 That sheen on the crust is very very attractive Alan, nice crust.  Although the openness of the crumb isn’t up to your standard, it is still very nice.  I suspect the time in the KA may have led to that tighter crumb, at least that’s my guess.

I guess your wife was out so you lacked your usual parental supervision!  Despite that lack of supervision it is a good looking bake.

in a very good way, and I'd love to have it repeat.  The bake had the typical M.O. for ciabatta of 15 minutes of full steam followed by another 15-20 without.  I'll also strongly side with you (and myself) that the mixer created the environment for a tighter crumb.

The gal was indeed out and no longer having the dog as her backup to keep me on the straight and narrow, I'm a loose cannon at home!

Fortunately for we wee home bakers, the risks are small and the rewards can be great.  It's an inexpensive and delicious hobby to get addicted to.  Unlike other tasks and hobbies where a mistake can be costly in more ways than one.  First comes to mind is violating the golden rule of "measure twice, cut once".

If you figure out how to achieved that beautiful sheen please share it with the rest of us.  That is a crust worth being able to repeat ad infinitum.

Playing around with recipes is always interesting... to find out what is really necessary and what is just tradition,

I usually do something pretty well then blow it up the next time to see what happens then come back again. It's a process of finding an alternative optimal path by diverging and coming back.

were the retardation of the levain and the autolyse, but things got in the way of running this dough and bake before the next daybreak.  I suppose I could have just tossed the pair and started over again, but then I never would have known what would have happened.  And much more importantly, I was fresh out of bread at the time!

I'd like to say that experience in this case counts for something, and I suppose it played a role, sharing the stage with just dumb luck.

Even if you don’t know why.

Yuo even got your preferred barrel shape.  Nice crust, too.

for me, clueless may indeed be a fair description.  I'm usually fairly on the money for ciabatta shaping, but I suppose, as I made note of and Benny mentioned, the dough had decided to become overdeveloped.  With a helping hand from me.

It may be a chicken and egg thing between us as to who came first with inability to divide ciabatta unevenly!

You always get a lovely caramelization. And may I say, if I remember correctly, this is some of the best oven spring you have gotten for ciabatta.

become such good friends?  Other breads I bake (occasionally I bake baguettes) take on a fair caramelization, but for whatever reason ciabatta is not usually among them.  I searched back through my photos app and it is unusual for them to have such a sheen.  I also see some pretty fair oven spring in the past as well, but I think it has become more consistent since adapting the Scott MeGee method of a pre-shape first along with the Ciril Hitz method of folding over the ciabatta dough after it has been dumped from vessel to countertop.

If you or someone else hasn't already seen these two methods combined and in action, here is a video I made of the Giorilli formula ciabatta using both.

Sugars need to be leftover for a nice caramelization. If over fermented one of the signs is a crust that doesn't brown nicely. Instead it's pale and hard. A nice sheen, thin and crispy is a good sign of perfect fermentation. Perhaps for these baguettes, somewhere in the method behind your madness, you've hit that sweet spot.

I'm a fan of no shaping. For obvious reasons.