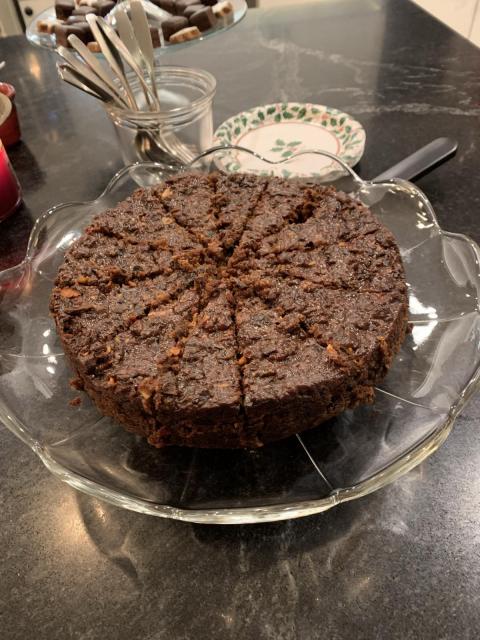 This cake, a Jamaican Christmas tradition, came to my attention from a very strange direction.

Back in October, my wife and I, along with my sister and her boyfriend, spent a long weekend in Michigan's Keweenaw Peninsula.  That's the “horn” pushing up into Lake Superior at the western end of Michigan's Upper Peninsula.  We happened across The Jampot, a bake shop operated by the Holy Transfiguration Skete Society of St. John, a Byzantine Catholic monastery.  Seriously, where else would one go to find out about a cake that is beloved on a Caribbean island?

The Jampot's version is a large, loaf-shaped cake with a $54 price tag.  My interest was piqued, even though my pocketbook was unmoved.  After some on-line research, I settled on this recipe.

If you look at it carefully, you will note that it calls for just over 5 pounds of fruits and nuts.  Add to that a pound each of butter, sugar, and eggs.  And close to a quart of booze.  Only one pound of flour is allocated to bind all of that together and just 4 teaspoons of baking powder to leaven it.  This is not a dry, light cake.

The recipe says that the fruit should soak in the rum and wine for at least three days.  I let it soak for close to a month, thinking that it would allow for a better marriage of the flavors.  I’m happy with the results.

On baking day, I made the caramel color, then ground the fruit and almonds in the food processor as directed.  The rest of the process was fairly straightforward but I was very glad for my 7-quart KitchenAid mixer, since the batter and fruit filled the bowl nearly to the rim.  If you have a mixer with a smaller bowl, plan to combine the batter and the fruit in a large mixing bowl by hand.

The recipe makes three 9-inch cakes.  I used two regular cake pans and one spring form pan, which turned out well, since it would have overflowed a third regular pan.  These cakes have a long bake time.  The cakes in the regular cake pans took two hours; the thicker cake in the spring-form pan baked for 2.5 hours.

The cake is very rich and filling.  The flavor is deep and complex, with both the fruit and the booze figuring prominently.  There's lime zest and cinnamon in the mix but those contribute undertones to the flavor, rather than being noticeable as distinct flavors.  The texture is predominantly that of the fruit.  If you will, this is a cake made of fruit rather than a cake that contains some fruit.  Not surprising, considering the ratio of fruit to flour.

I would make this cake again but I will want to make sure that I have plenty of helpers to eat it.  It’s a lot of cake!

You can definitely tell that orange juice or water weren’t the soaking liquids.

I noted on the recipe page that the source is the "Naparima (Trinidad & Tobago) Girls’ High School Cookbook."

My first thought: That's something they feed to high school girls?!  But then realized (or at least hoped) that it was a fund-raiser publication.

But, the cake could well be something that would have been on family Christmas tables.  Probably too expensive, never mind the booze, for a school cafeteria item.

I’ve never had the pleasure of having a Jamaican black cake but have heard that it is quite delicious.  Your cake looks delicious and well worth the effort Paul, I’d love a slice of that right now with my tea.

And great with tea, too.  Well worth the effort.  Do try it if the opportunity arises, Benny.

Think I feel the need to bake a boozy fruit cake, or three.

Thanks for sharing, looks like an inspiring bake to try.

You must have some very lucky friends receiving the extra cakes, or was the plan to save some for Christmas?

This could be a winner for you, JonJ.

One cake is nearly gone after a neighborhood party.  We have two family gatherings coming up, which might take up the other two cakes.

I didn’t have a set plan for what to do with them after they were made.  It was more that it looked too intriguing to pass up.  It was only after looking at them as they cooled that I thought “Now what?  Not everyone likes fruitcake as much as you do.”

This cake is extraordinary! The ingredients stood out to have fabulous potential as I love them all; especially when I saw 2 cups dark rum plus extra (I hope some for the baker). Looks very rich which is what I like about this cake. I'll have to research an alternative for the Concord grape wine: is it sweet, medium for dry? Red, port or sherry?

We used Jam Jar Sweet Red Blend and it tastes just fine with the other flavors.

You might find that a medium red works, too, but I wouldn't suggest a dry red.

Yes, all of the ingredients are good in their own right and they combine to make a thoroughly delicious cake.