The basis for this bake is Hamelman’s Roasted Potato Bread from Bread (2nd Ed.).  This is my second time making it with two tweaks that I thought were minor (but turned out to be a big difference) and also baked at a lower temp this time.  I followed the recipe verbatim the first time I made it and used Mr. Hamelman’s suggestion of oven roasting the potatoes.  The bread turned out very good.

This time, I wanted to see if I could bring out the flavor of the potato a little more and also wanted to use a little bit of yeast water in the pate fermente instead of just ADY.  I prepared the potatoes using my favorite way of having them: pan fried in butter.  However, instead of using a medium heat and browning/crisping the potatoes, I used a low heat with a covered pan for 90 minutes (turning them every 30 minutes).  With that, the potatoes became more carmelized than fried.

Whether it was the difference in potato prep or use of the RYW I can’t say for sure (leaning towards potato prep), but the dough was almost uncontrollable.  While going through the same procedure of bowl kneading, the dough was already starting to take off.  After going to bulk, it rose 2.5-3x in 30 minutes.  I punched it down aggressively and pre-shaped, but in hind sight, I should have let it double again.  By the end of the 15-minute bench rest, the surface of the doughs were already bubbling.  I degassed aggressively again during final shape, but they were almost overflowing the bannetons after 45 minutes at 74-75 deg F.

The first time I made the bread, the bottom crust was on the verge of burning from the potato starches (450 deg F during steaming), so this time, I dropped the temps during baking.  Bottom crusts looked great, but I would have liked to get a little more color in the top crusts.  That being said, this bread is one of the most tender and soft I’ve made to-date (based on squeezing the loaves while bagging them) and had a nice potato aroma!  All these loaves were spoken for, but a friend did send a crumb shot.  Bit of a bad angle.  Overall, I think it looks OK but it was unfortunate seeing the large holes.  Not sure if that was the rapid rising or if I didn't fully degas before the final shaping.

SIDE NOTE:  I was shocked how "yellow" the soft white bulbs in our kitchen make everything until I turned them off to try and get an overhead photo without shadows of me in it.  Same photo below with lights on and off.

662.4g Water (may need to add more depending on residual moisture from potatoes)

1)      Prepare pate fermente by combining all ingredients and lightly knead until smooth.  Place in covered bowl and ferment for 12-14 hours at 70-72 deg F

1)      Cut potatoes into small cubes and place in covered frying pan with butter on low heat.  Make sure heat is low enough to not brown the potatoes.  Stir ever 20-30 minutes to cook evenly.  Let cool after 90 minutes and then mash them with a fork.

2)      Add 150g of water to the potatoes and mix thoroughly to create a loose mashed potato consistency.

4)      Combine all ingredients including salt and start to mix.  Add chunks of pate feremente while mixing to incorporate it.  Mix until flours are wetted.  Adjust hydration if needed. 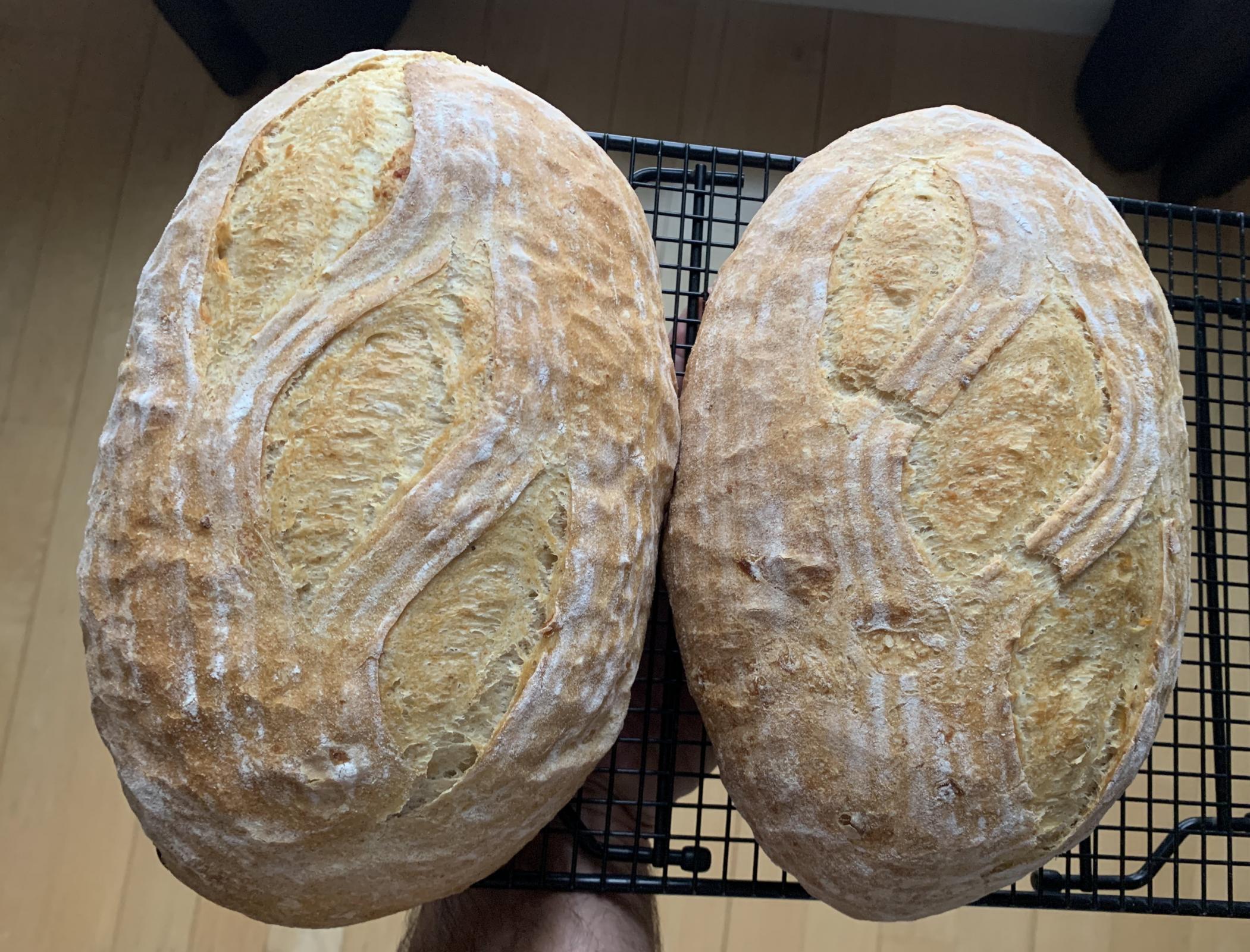 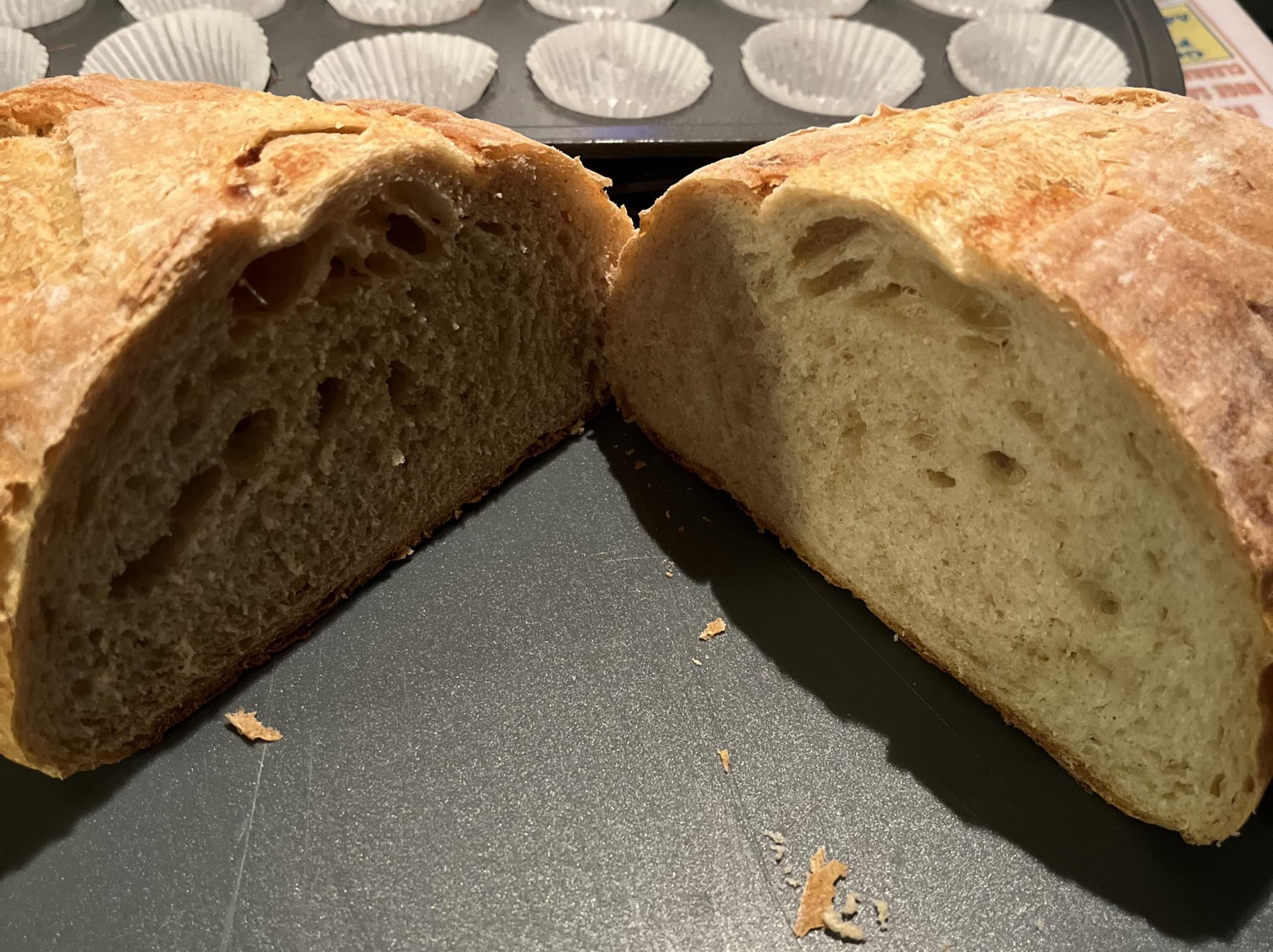 The basis for this bake is the recipe Beer Bread from Bread (2nd Ed.).  I also added a rolled oats/stout soaker.  For the beer, I used North Tower Stout by Earth Rider Brewery.

3)      Combine soaker ingredients in a covered bowl and refrigerate

5)      Combine all ingredients including soaker, rye sour, liquid levain, and salt.  Mix until flours are wetted.

13)   Final shape in an oval and place in a banneton 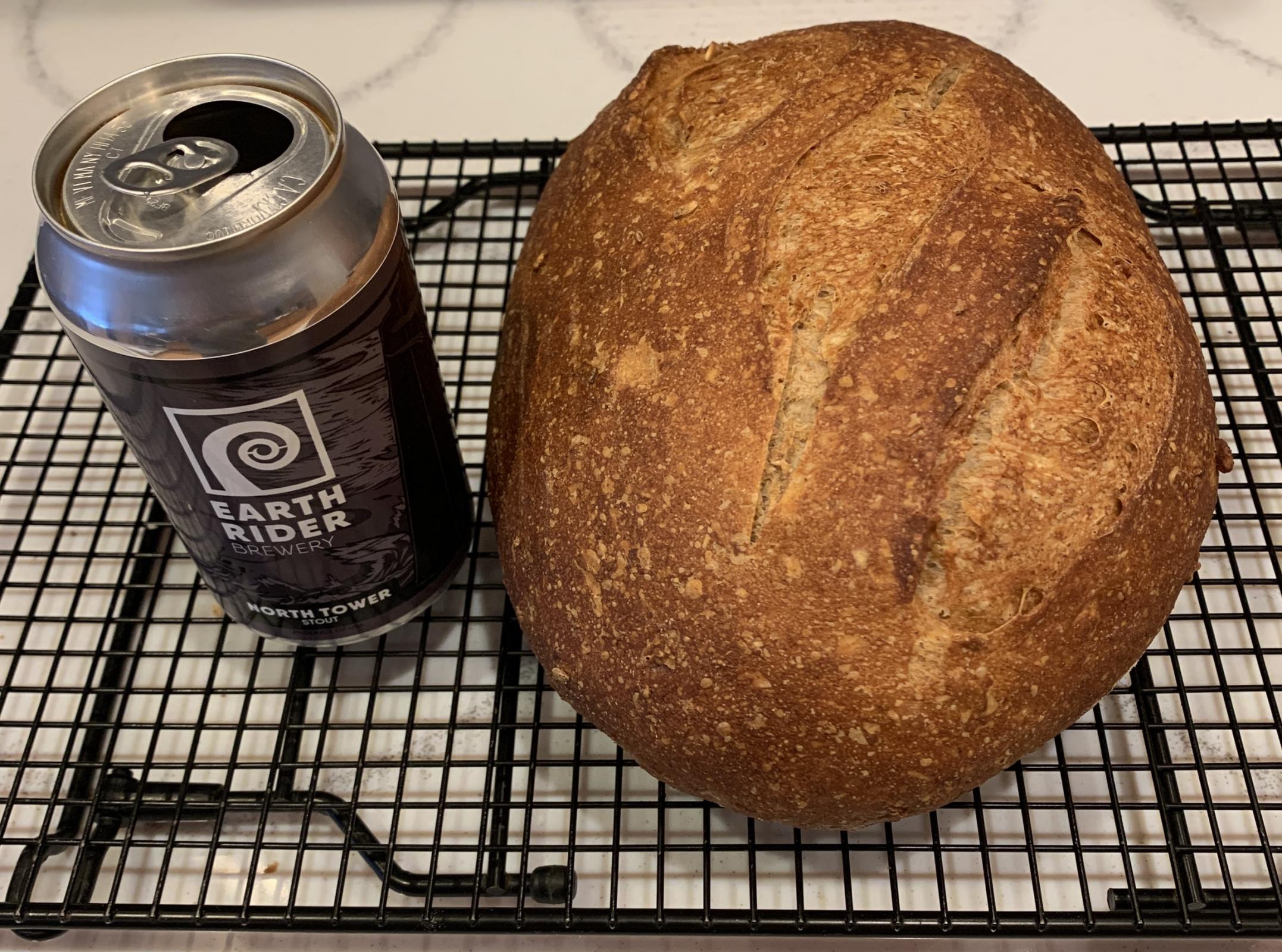 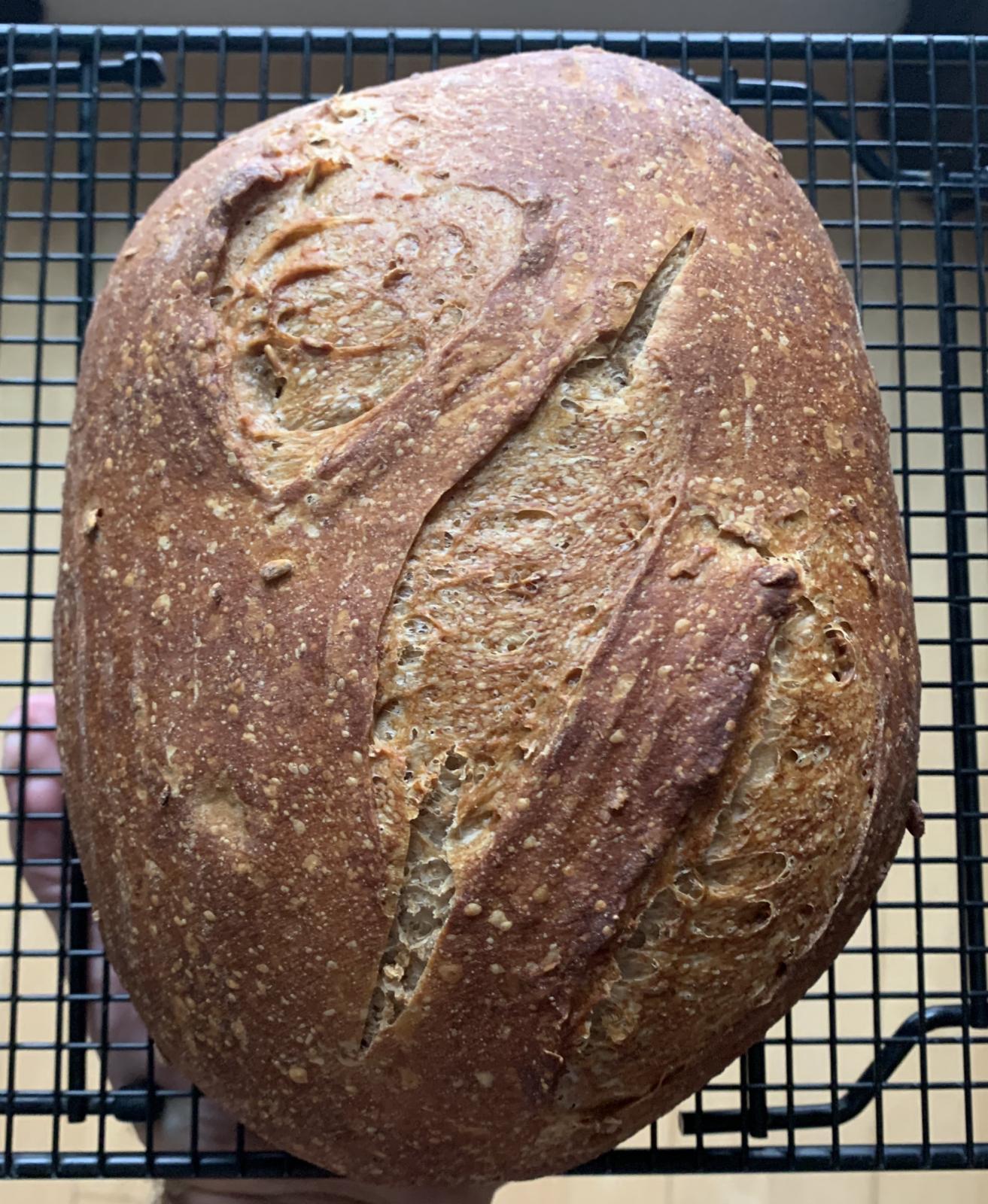 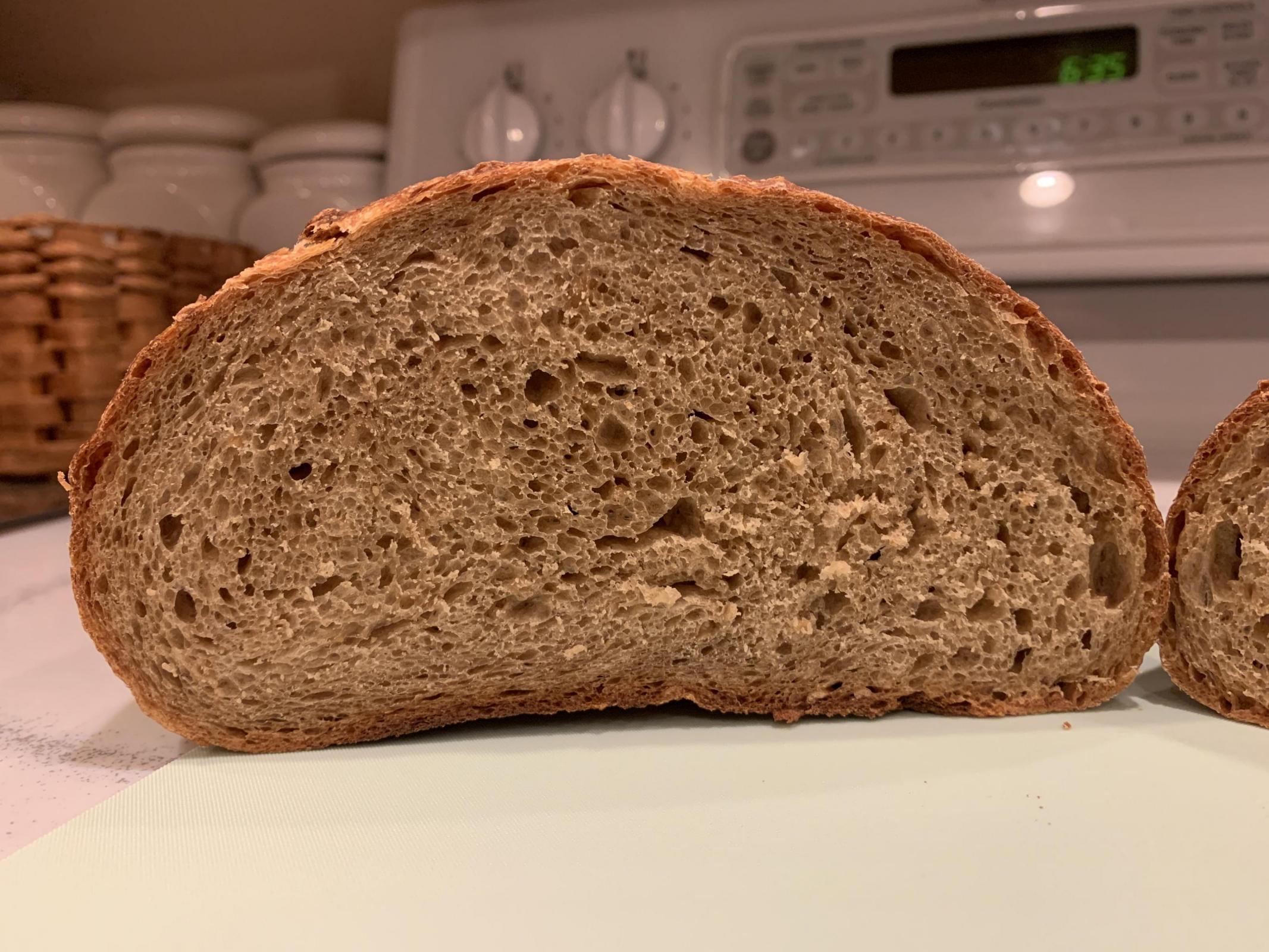 Refreshed my starter this weekend and didn’t want to waste the discard.  Followed the recipe in Sourdough Cookbook for Beginners from Breadtopia.  I like this recipe.  The sourdough and the whole grain seem to take the edge off the sweetness of a chocolate chip cookie and they are not greasy at all.

100g All Purpose Flour (for 100% hydration discard.  Adjust as needed)

1)      Combine flours, baking soda, and salt and whisk together.  Set aside

2)      In a separate bowl, beat butter, sugars, discard, and vanilla extract until creamy (I used a stand mixer with paddle attachment)

3)      Add egg and mix on medium speed until fully incorporated 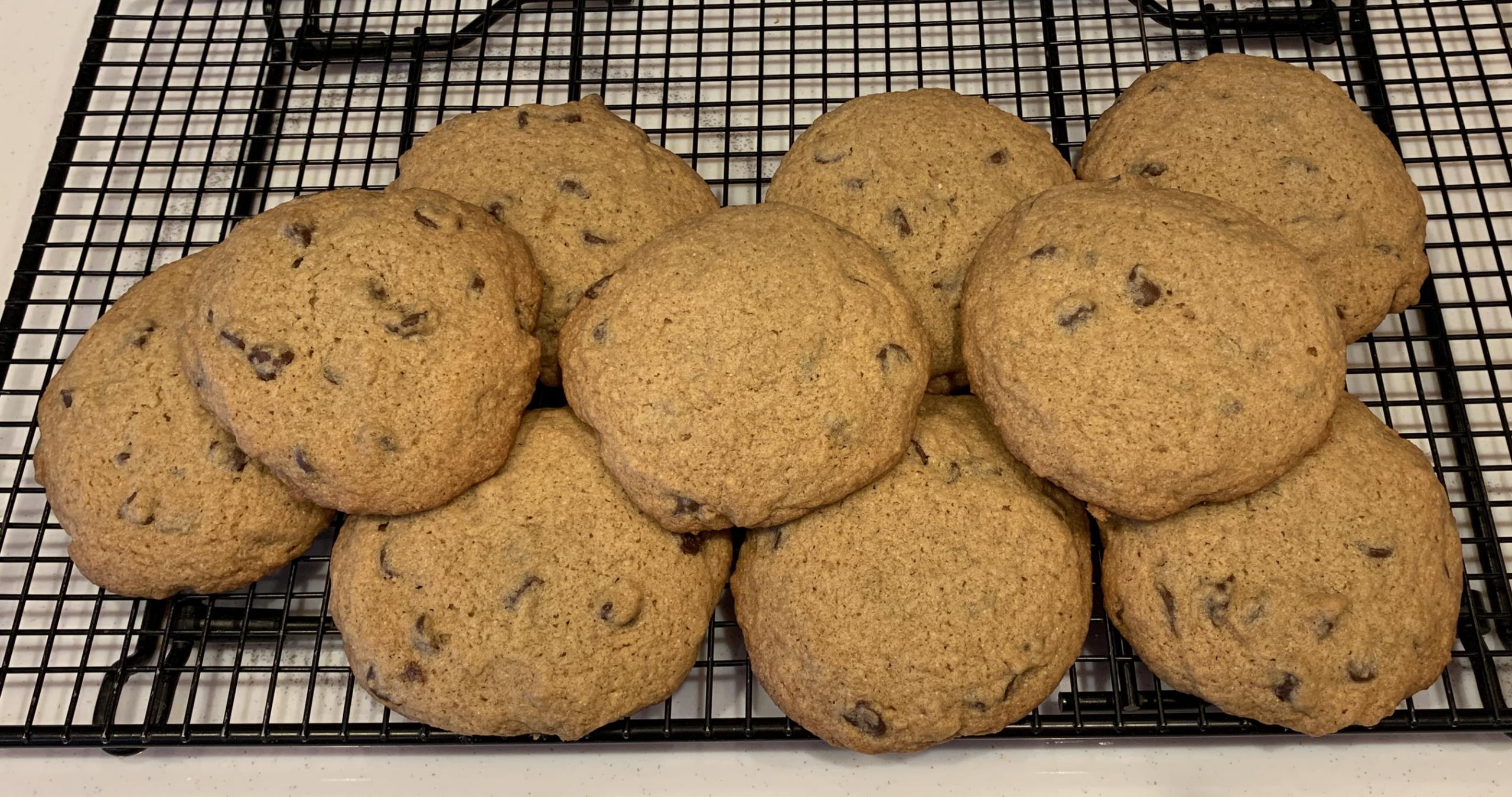 Wow big baking weekend Troy and it all looks so wonderful.  It is crazy how quickly your potato bread was fermenting, actually too fast eh?  Lots of leavening from two doses of ADY and then the RYW.  What would you change if you do this again?  In the end the bread looks delicious.  Same with the oatmeal stout loaf, delicious and a beautiful crumb.  The cookies look yummy as well, I haven’t made cookies in some time and don’t have discard but these look and sound good enough to make a levain to use for them.

Thank you Benny!  I have to get off the TFL site...  No matter how hard I try, my list of "Want To Bakes" keeps getting longer. :-)

It might have been the double dose of RYW/ADY in the pate fermente.  The base formula calls for 0.2% ADY, so I cut it to 0.1% and roughly split the RYW/water in the pre-ferment.  I don't know the relative yeast count between 0.5g of ADY and 160g of RYW, so I may have undercompensated.  I personally think it was the potato prep.  Lots of starch there and the low/slow cook likely turned a lot of that to sugar (as well as concentrating the potato flavor).  Well...  I assume a potato starch will break down to a sugar in those conditions, but maybe not.  Will have to dig into that if I have time.  Because it's not sourdough and no worries about getting too acidic, I will likely keep punching down the dough if this happens again.  I'll keep letting it bulk until it slows down to a rate of doubling in 60-75 minutes.

I really like this cookie recipe.  Simple and pretty quick from start to finish (minus the cold retard time).  The first time I made them I was surprised at how the end product is sweet, but not like you're biting into a bar of sugar.  The discard (or maybe the whole grain) just seems to take that edge off.  The base recipe calls for a smaller cookie (about half what I did) with an 8-10 minute baking time if you want smaller snacks. :-)

Everything looks delicious! I love to try one of the chocolate chip cookies!

Thank you Danni, and thank you for the help with the soaker.  No stale beer smell at all with the overnight refrigeration.  To be honest though, I'm surprised at how little I smell the stout in the sliced bread.  I'll use it in a sandwich for lunch and maybe the stout flavor will show up there.  For the most part though, it smells more like a mild sour rye than anything.  Smells good, but just not like a stout beer.  :-)

The smell seems to disappear. You should be able to taste it though.

What? I can put starter in choc chip cookies? Wow. Gotta try that. I think you've opened a pandora's box here! My mind spins with possibilities.

Would love to make one of those. I remember potato bread was a trend up here maybe 30+ years ago in supermarkets. Love the idea of caramelizing the potatoes to bring out more flavour, too.

Alas, I am trying to lock myself down to mastering rye these days before loving on to something else :)

I know, right!  The possibilities are endless.  I’m thinking of trying it in oatmeal raisin cookies next.

Thanks for the kind words.  I’m still experimenting with different scoring patterns.  That one seemed to work pretty well, but need to do some more with it.

Kudos to you for staying focused on a style.  I’m still experimenting to see what I like the most. 😁