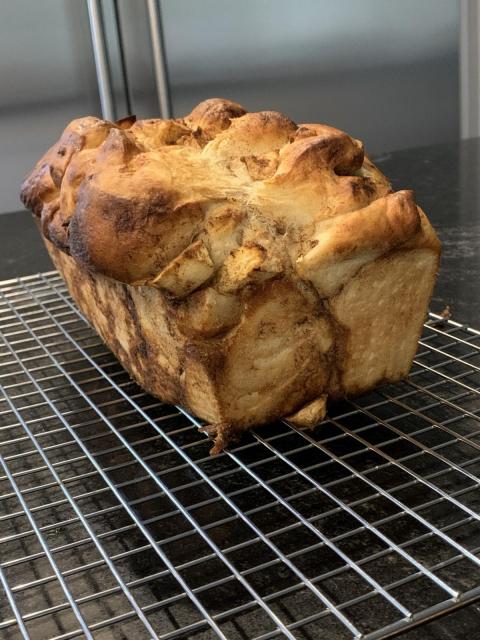 Although, really, I think it would be better named “Apple Chopped Bread”.  One could almost treat it as a pull-apart bread but it toasts up so nicely that I prefer to slice it.  As its appearance suggests, flavor matters more than beauty for this bread.

I find myself wanting to make this bread at least once each Fall when apples are in abundance.  Although there is no added sugar in the dough, the apples, brown sugar, and cinnamon in the filling provide enough sweetness without becoming cloying.  And, though the original recipe doesn’t call for it, I like to add a bit of mace to round out the flavor.

The recipe in Clayton's New Complete Book of Breads makes two 4x8 loaves.  My tweaked version is scaled down to one 4x8 loaf:

Measure the water into a medium mixing bowl.  Sprinkle the yeast on the water.  When the yeast has hydrated (most of it will sink to the bottom of the bowl), add the remaining ingredients.  Mix to form a shaggy dough.  Turn the dough out onto a lightly floured surface and knead for 8-10 minutes.  The dough will smooth out and become elastic.

Place the dough back in the bowl and cover it to prevent drying.  Allow the dough to ferment until it doubles in volume, which will take approximately an hour.  Turn the risen dough onto a floured surface and roll or press it into a 16-inch square that is approximately half an inch thick.

While the dough rises, thoroughly butter or grease an 8x4-inch loaf pan.

Peel, core and dice the apple(s) and scatter them on the rolled-out dough.  Pour the beaten egg over the diced apple.  Combine the brown sugar, cinnamon, and mace and sprinkle over the apple/egg mixture.  Fold the dough so that the filling is completely enclosed.  Use a bench scraper or chef's knife to roughly chop the package into chunks approximately 1-inch square.  (No, it won't be pretty!).

Scoop the chopped up dough and filling into the prepared loaf pan.  Cover the pan loosely with plastic wrap and let the bread rise until it is slightly above the edge of the pan.  Depending on room temperature, this may take 45-60 minutes.

Preheat the oven to 375F.  Place the pan in the oven and bake for 40-45 minutes.  The internal temperature should be 190-195F.  Alternatively, a skewer or cake tester inserted in the center of the loaf should come out clean when the bread is ready.

Remove the baked loaf from the oven and use a butter knife or similar tool to gently loosen the loaf in the pan.  Carefully remove the loaf from the pan (it will be fragile and the filling will still be molten) and place it on a cooling rack. Cover loosely with a towel while the loaf cools to room temperature.

This bread is good as is or with a smear of butter.   It makes fabulous toast.  I suspect it would make marvelous French toast, too, but haven’t tried that yet.  Edit: Have confirmed this morning that the bread makes very good French toast, indeed. 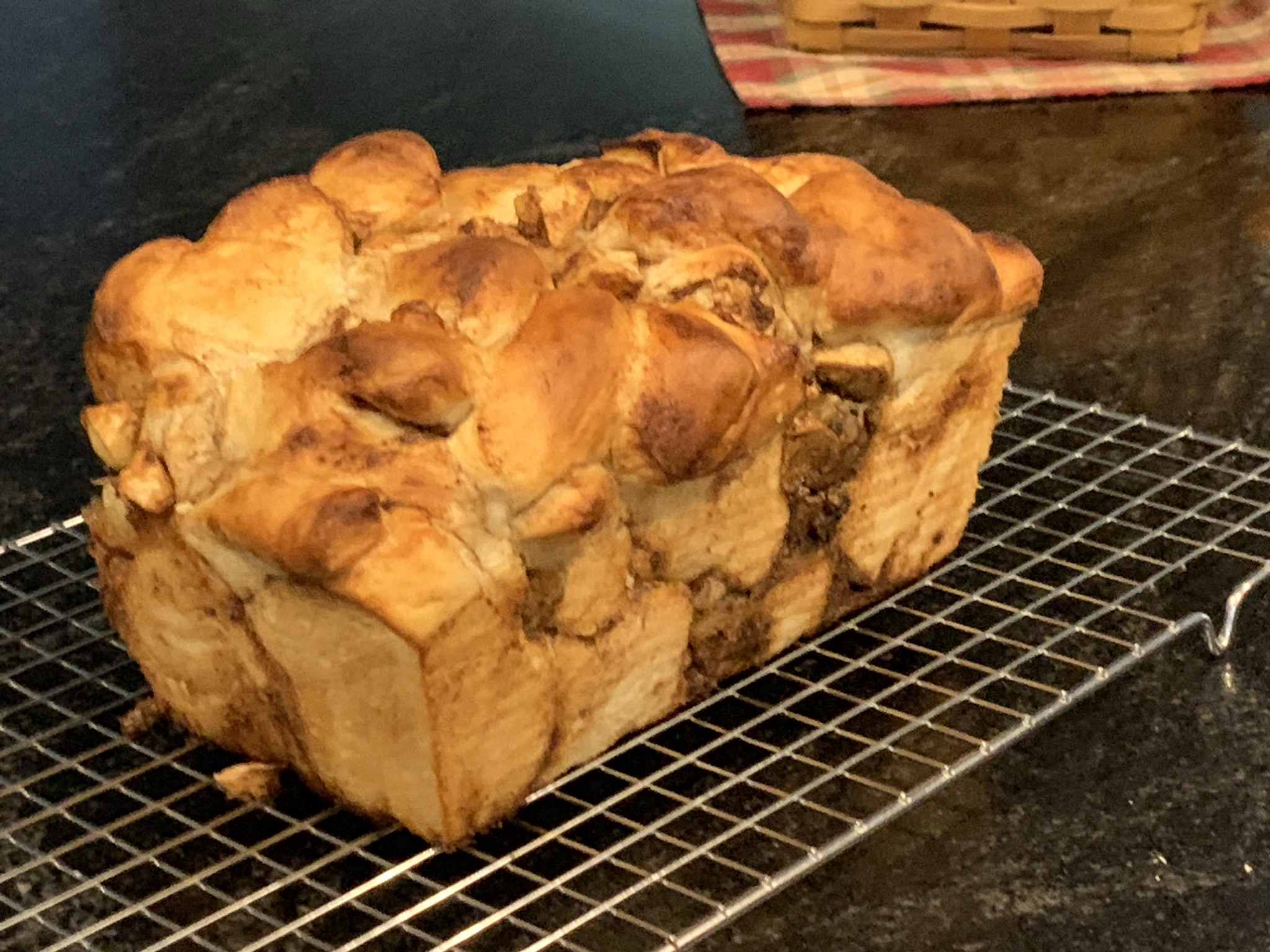 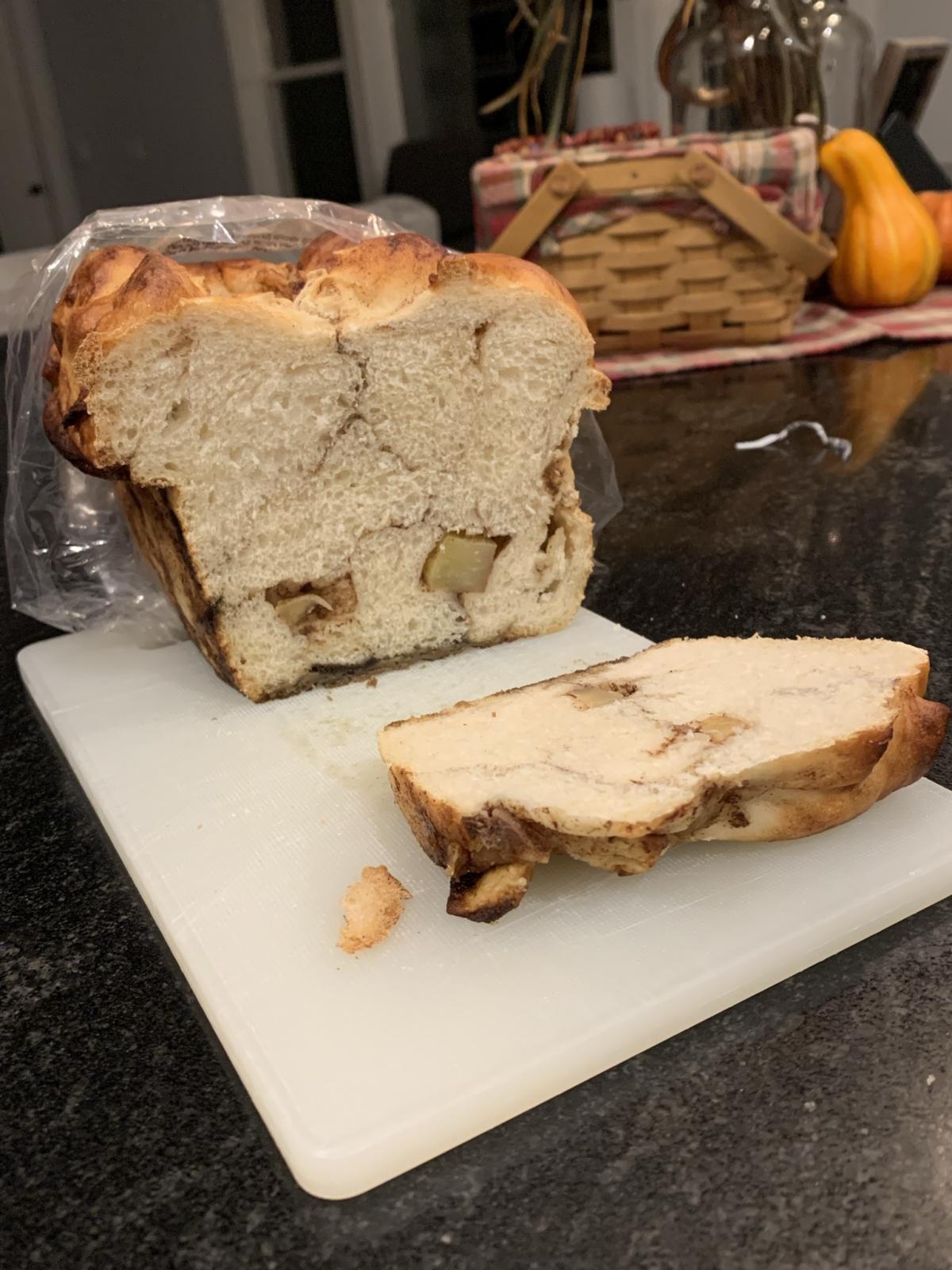 I haven’t had them out in years. I used to make Pogne de Romans with orange flower water every year. That apple bread looks wonderful!!!

I only rarely haul out the book anymore but it does have some long-time favorites.  The honey-lemon whole wheat bread would be one such example.

I love how rustic that loaf looks Paul and I’m sure it is delicious. Enjoy!

I saw a similar bread in a diner some years back.  I think they called it "Cobble Bread".  And yes, this one is delicious.

The rustic look of the loaf is somehow appealing; you know you are going to get a mouthful of flavour and delight. I love it.

It's definitely a mouth-pleaser, even if it has a face only a mother could love.

Oh, man, does that ever look good. Thanks so much for posting this recipe.

I'm pretty sure you'll enjoy eating it, if you do.

Nice bake Paul.  Looks like the perfect fall bread.  I’ll have to check out his newish book.  I have is original one and remember making some interesting breads from it in the past.

but it somehow seems more appealing in the autumn.

My book is a 70's vintage.  My impression is that the newer one is simply a reprint, rather than having been updated.  Or did it get refresh?  I'd love to see a version that has been revised to include ingredient weights and a stronger sourdough section.

Thrift books and others have all his books quite inexpensively. I have the '73 Complete Book of Breads and his Breads of France and Pastries. I LOVE the breads of France. It is a wonderful read even if you never bake a loaf. His travels and experiences were so interesting. He is missed. I baked my first breads in 1975 from the Complete Breads book. c

I think this was my first ever bread cookbook.  It gave me hours of enjoyable reading and a host of delicious breads, many that I'd never heard of before.  Although it has some weaknesses and is very much a product of its era, it was head and shoulders above anything else in the marketplace at the time.

Thanks for posting it.

My posting volume is down a lot the past couple of years but this is a bread worth sharing.

Thanks for posting this,Paul. A great recipe producing a very moreish bread! I used 1.5X your recipe to make 2 medium and one very small loaf.

For the info of any UK bakers, I used Golden Delicious apples - appropriately bland, but good texture. 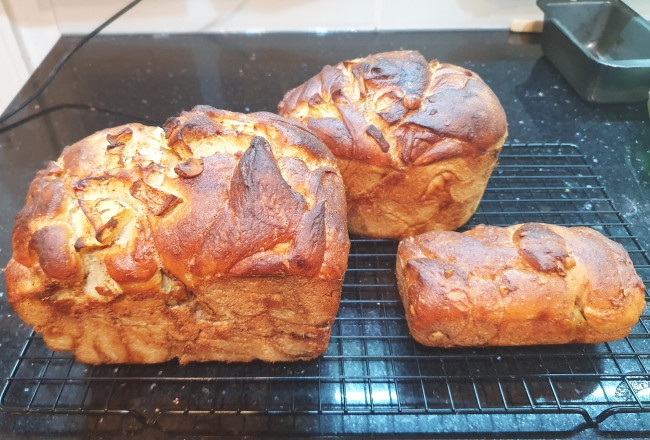 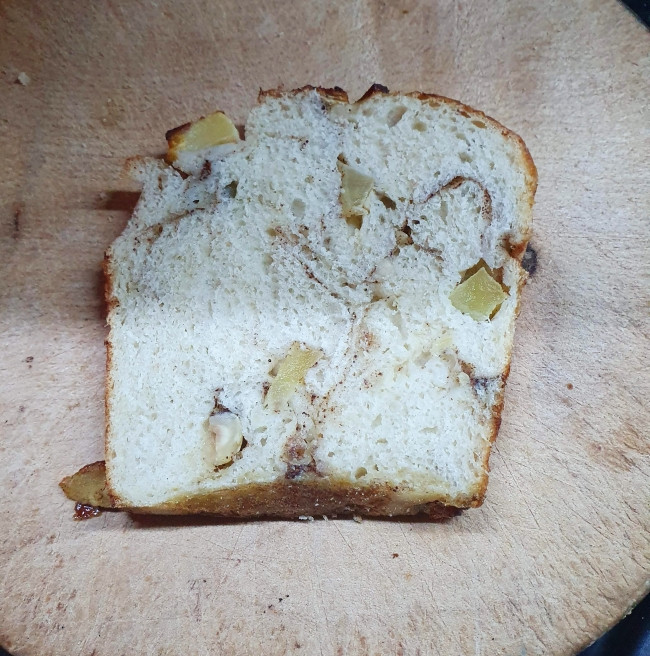 Moreish, indeed.  Glad you enjoy it.