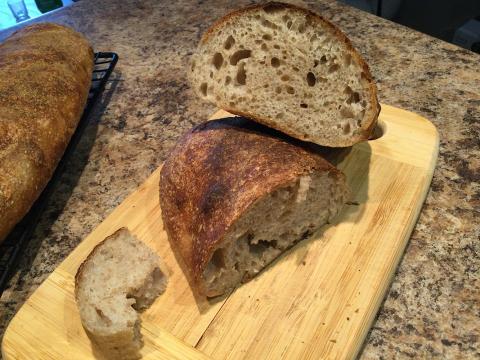 I was curious about yudane, a scalding method whereby you take 20% of the flour of your bread and treat it to equal weight of the water from your recipe at boiling temperature and let it gelatinize overnight.

This blog describes my experience doing it. I was very pleased with the results of using a freshly-milled whole wheat kernel yudane in a sourdough baguette. Crispy crust, fluffy crumb, creamy almost buttered flavour and texture with a mellow wheat flavour.

I've made my own pale imitation of Maurizio Leo's sourdough baguettes weekly for a few months now. I use a 100% hydration dark rye starter. I had to tone down the dough hydration to make it manageable for me (reduced levain from 140 to 115g; reduced added water from 100g to 40g). To enhance flavour I used a 10% rye, 90% AP + gluten. Last week I also did a 10% atta durum blend in addition to the rye.

This week, I found hard wheat kernels on sale at Bulk Barn and I bought a kilo to play with. I decided to use a yudane method to handle the fresh milled kernels and all their bran. Part of using yudane method includes increasing hydration to make up for the water locked into the gelatinized dough. So I boosted my levain up to 130g and my added water back to 100g. Since I was using a yudane, I eliminated the added gluten as well.

Here's 100g of kernels or so in my Porlex coffee grinder. It wasn't too bad grinding out 200g of kernels while watching some TV. It didn't feel that long to me and I certainly wouldn't buy an electric mill for this amount. 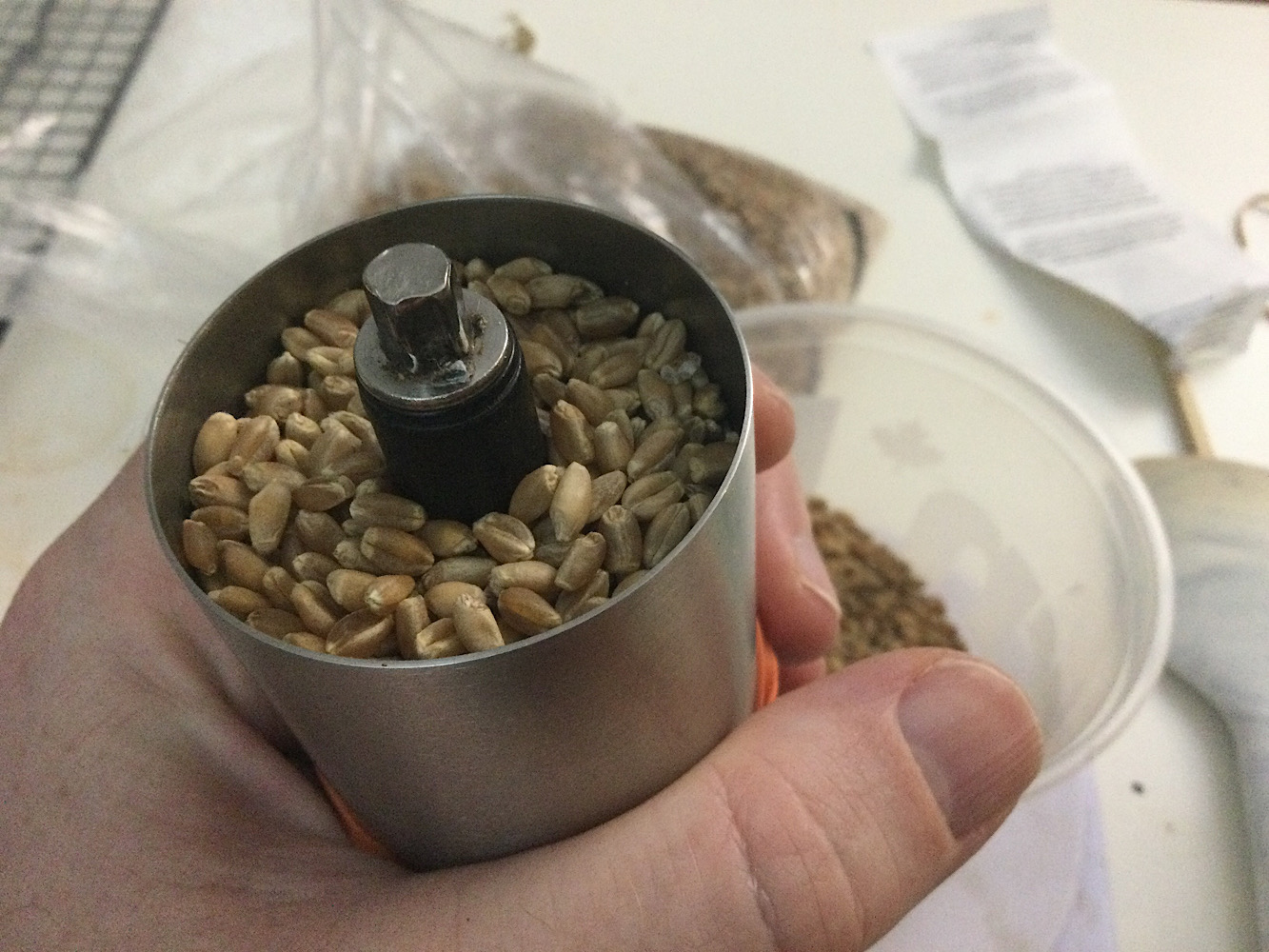 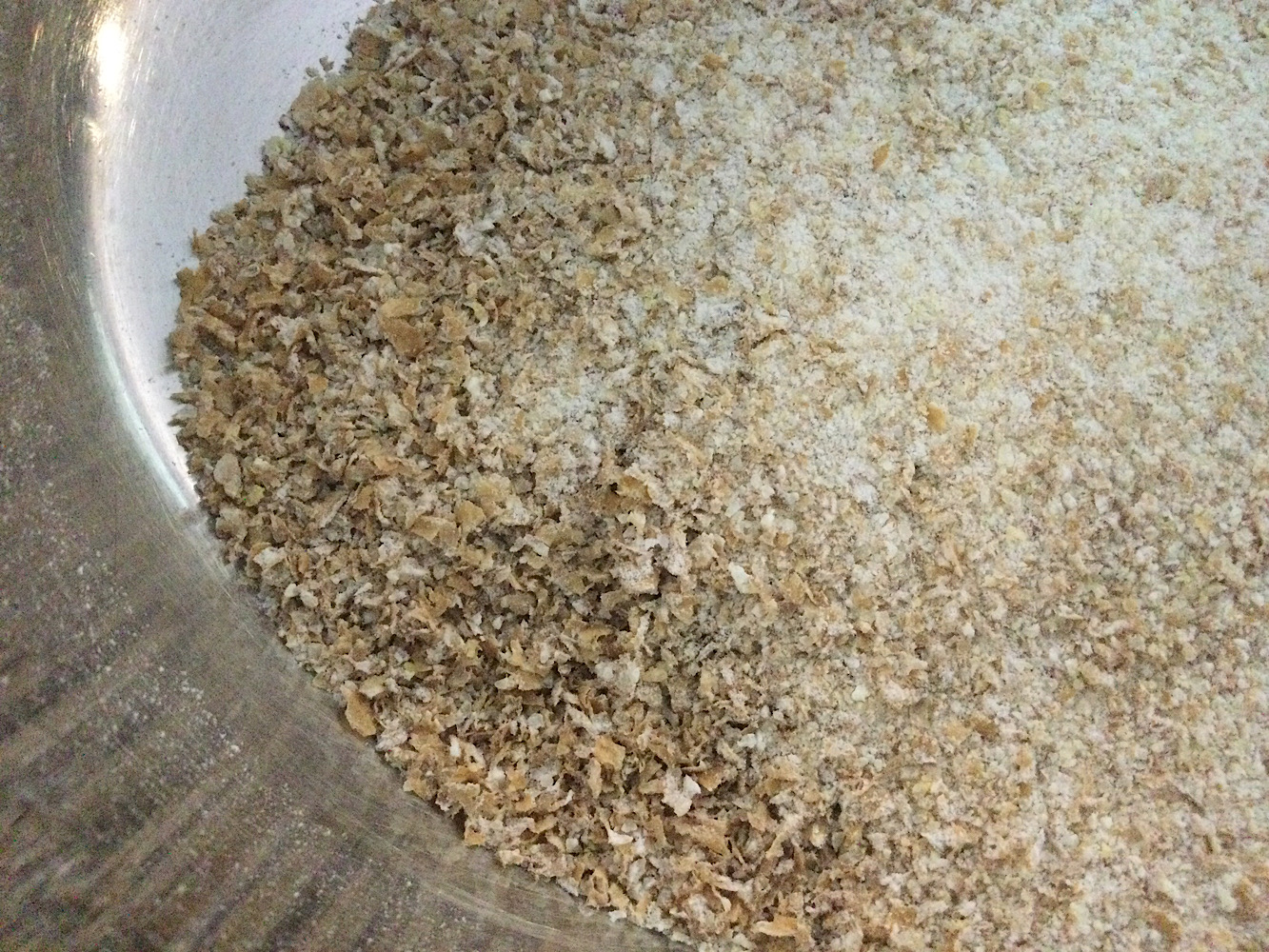 I added 200g boiling water to the 200g of whole grain flour to make a firm paste. 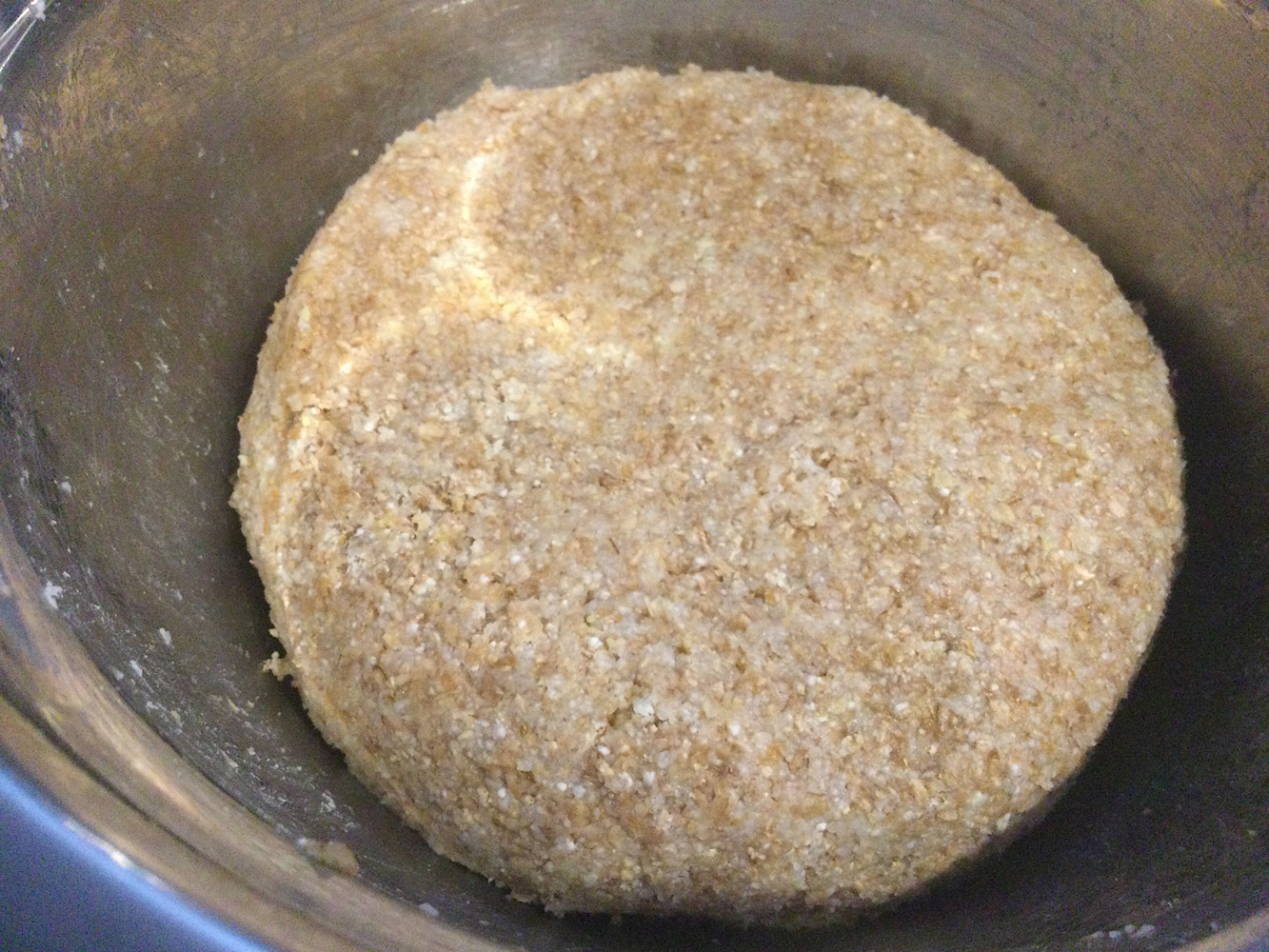 I covered the paste and left it on the counter overnight... a key yudane step. Next morning it was a dark, firm paste. 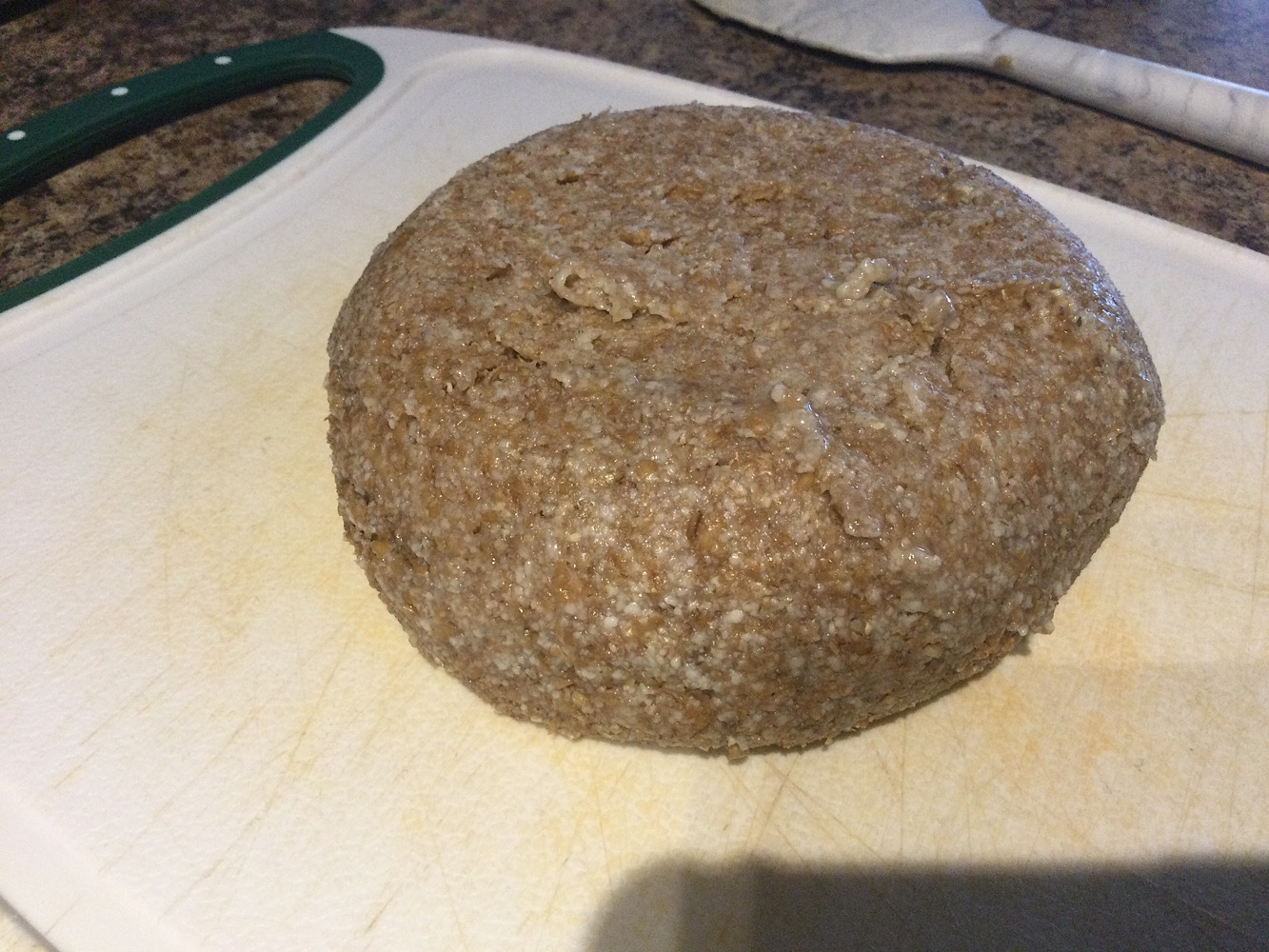 Adding Yudane to the Baguette Dough

Making the baguettes I autolyse flour and water for 30 mins then add the salt and levain. In this case the autolyse was all AP. 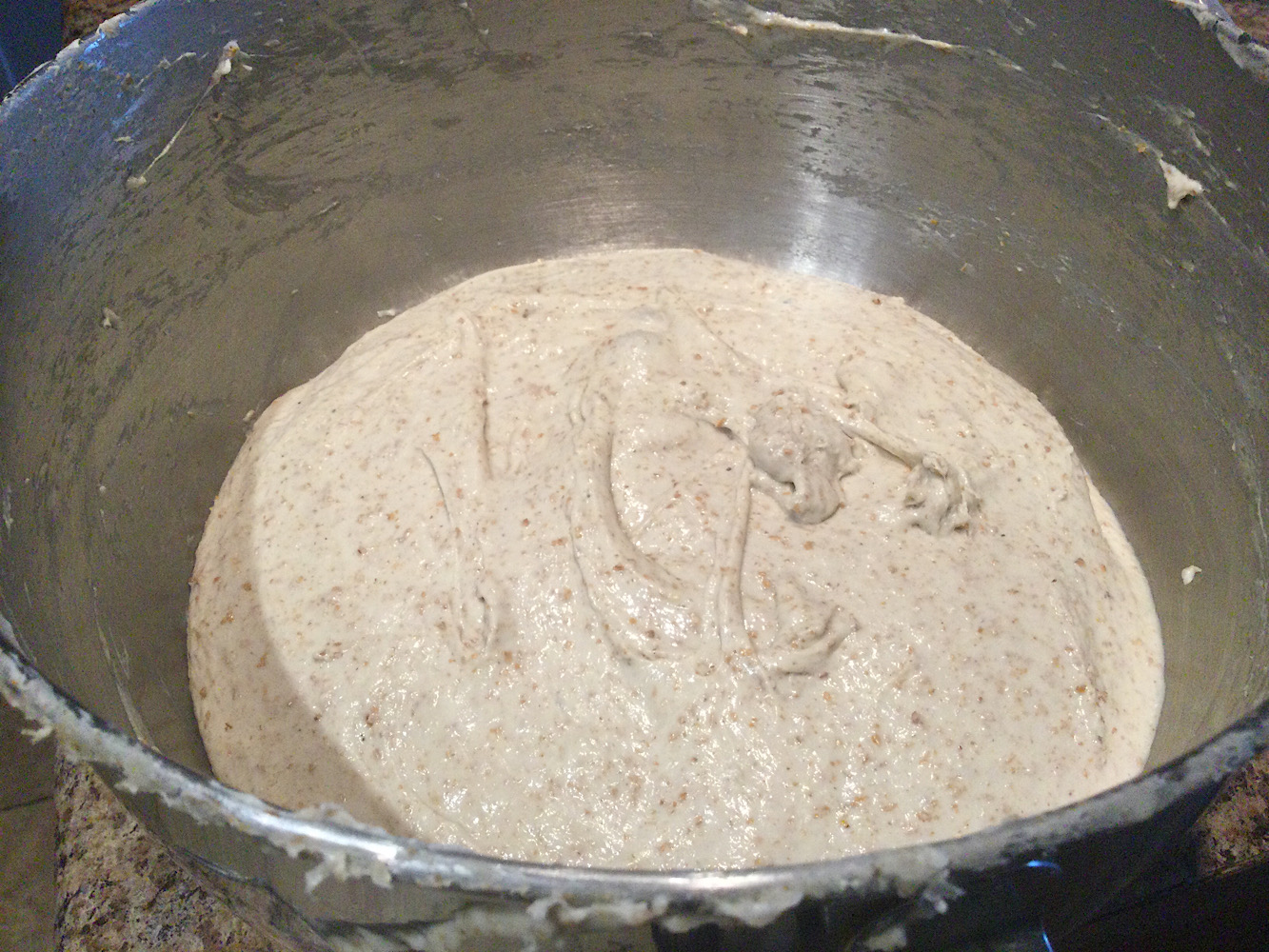 I did a retarded bulk in the fridge overnight and turned out the dough. It puffed up quite a bit overnight. I divided into 6 x 318g portions and shaped and proofed on pieces of parchment with all the loaves tucked up against each other in a pan. 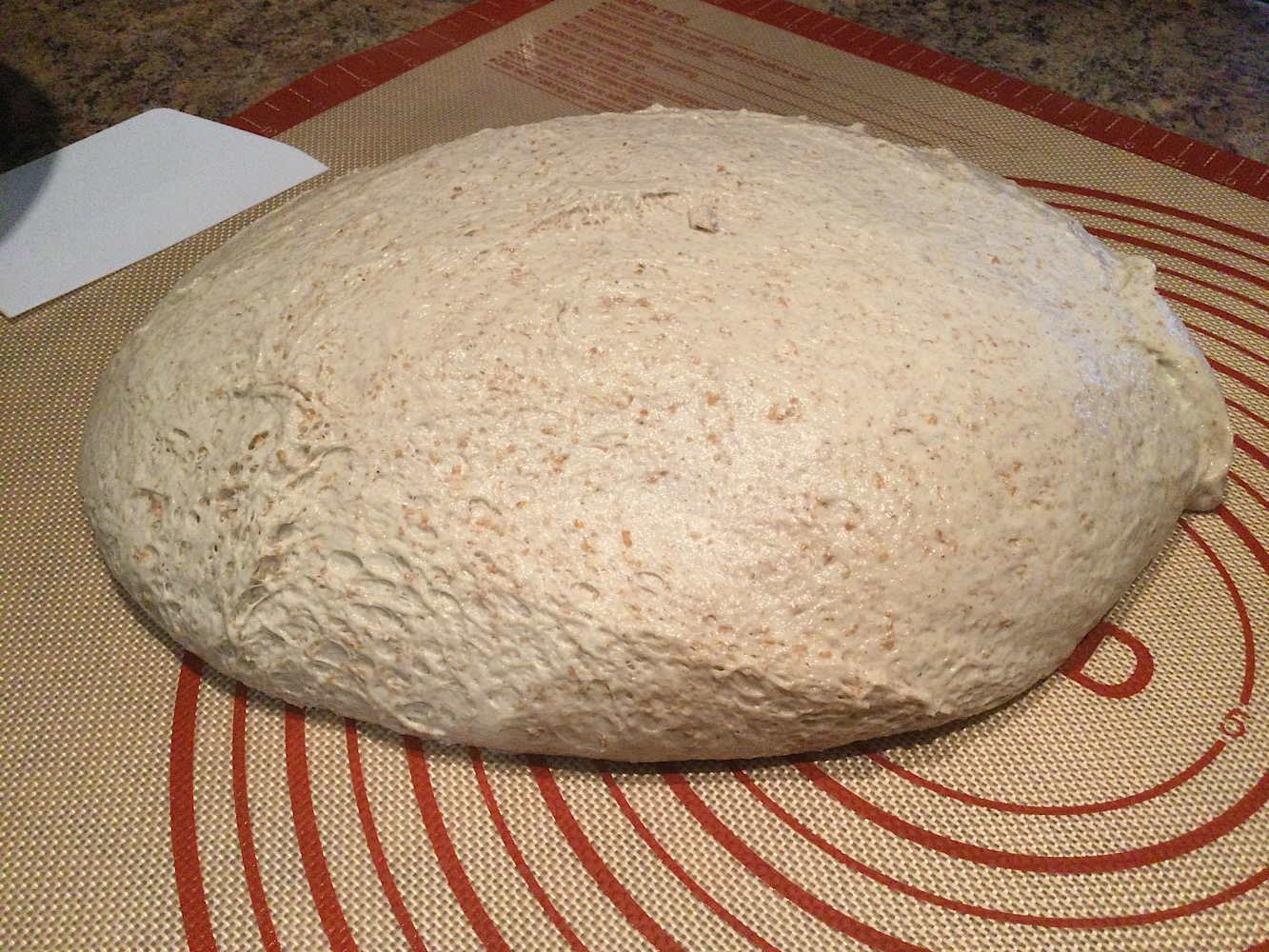 Preheated the oven to 500f with the baking pan in. Slashed and sprayed dough and loaded 3 onto the pan and turned down to 475 for 25min bake. Kept second set in the fridge, then did them afterward.

The loaves look the same as the past despite having 20% whole wheat with all the bran, no gluten added this time, and hydration increased. 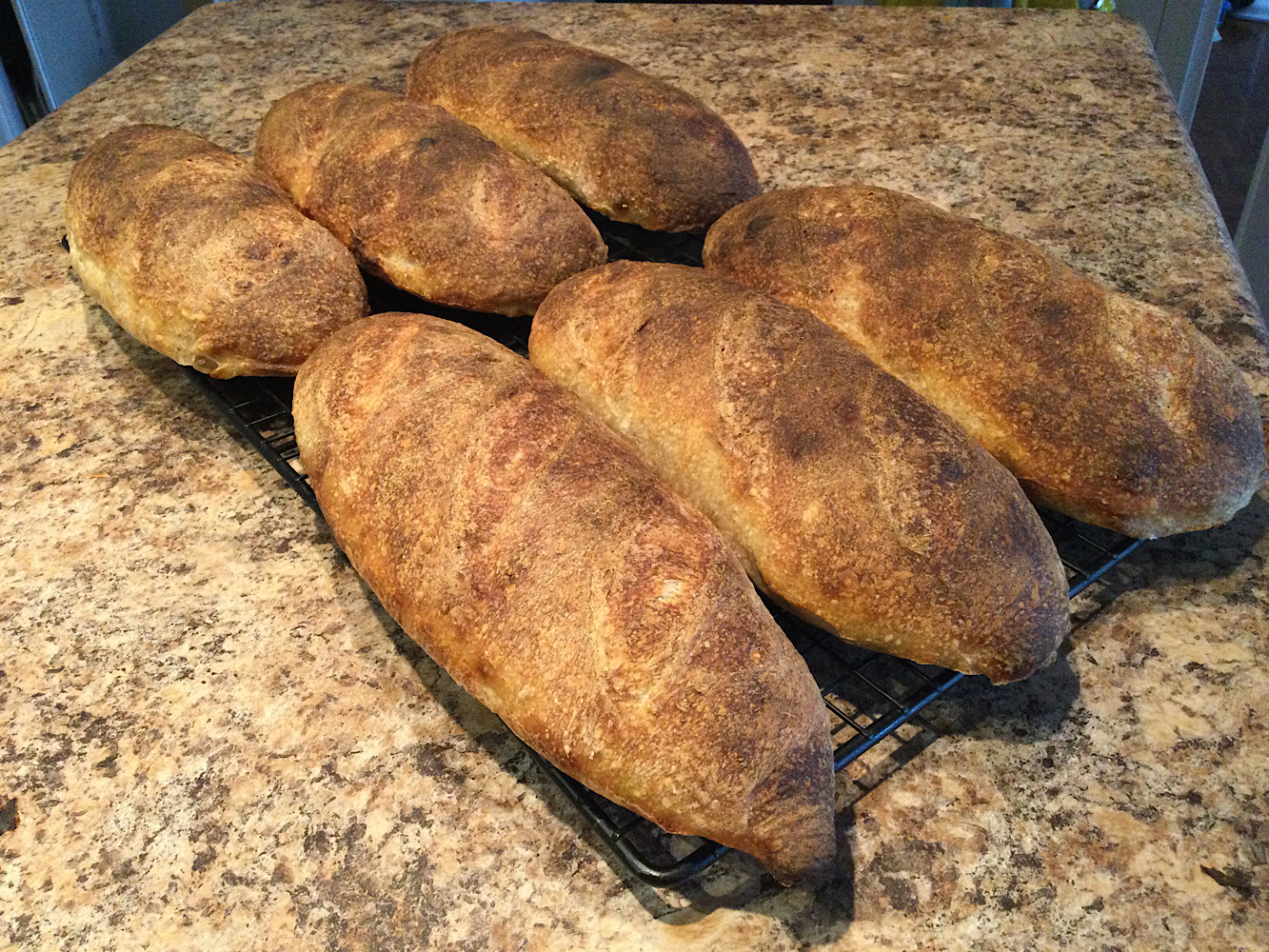 Crumb shot... looks similar to usual for past loaves. The texture was moist almost creamy with a nice soft chew to it that I like, and which is an improvement. Lightly crisp crust which is also an improvement. And the flavour... it's almost tasting like it's buttered. There's a nice whole wheat flavour but it's rounded and mellow. 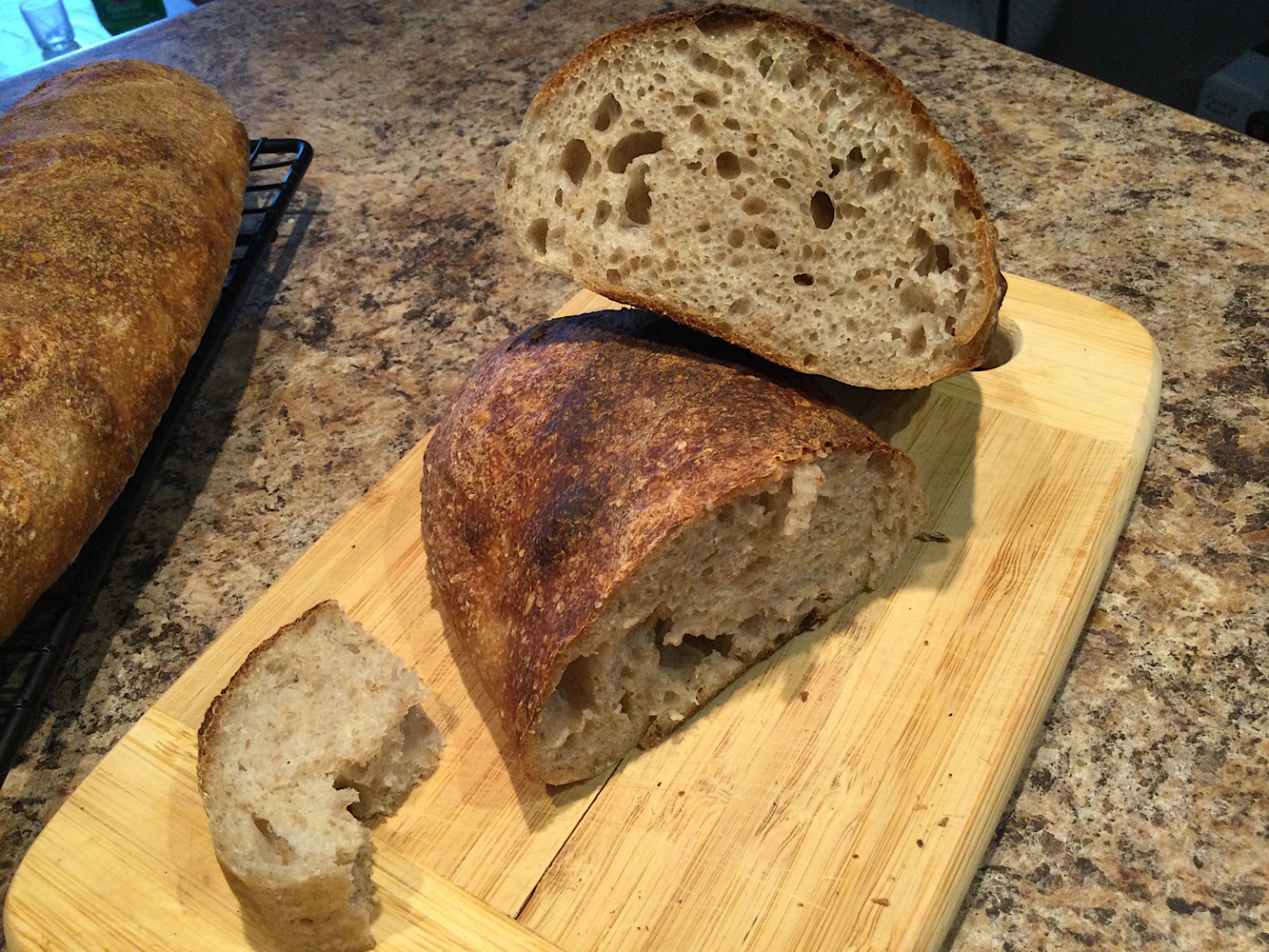 I think I might try a buckwheat yudane as well (lots of flour) and fresh-milled farro (kernels also at Bulk Barn).

EDIT: next day, thawed a loaf and toasted thin slices for open faced sandwiches, My favorite bread ever... taste and texture, wow. I am a total convert to yudane.

Such interesting baguettes.  These are the first Yudane sourdough baguettes that I have seen.  Thus far I haven’t used any scalding that I can recall for this type of bread, only for loaf pan breads.  Well done David.

Thanks, Benny. I am so amazed at the effect that I can't wait to try it some more and see if I can replicate it with different flours. I keep myself to one bake per weekend so lots to look forward to :)

Hey Happy Cat...thanks so much for posting.  You got me very curious about the yudane method and I now want to give this a try (along with Benny's recent post about Tangzhong).  It's always great to learn something new and I'm happy when I find recipes that incorporate whole wheat, from both a health and flavor standpoint.  And, it looks like this method dealt nicely with the high level of bran in your mix...the crumb looks diving and it sounds like the taste (the most important thing) was wonderful too.  Can't wait to try this out!

My pleasure. Let us know how it goes. I think I will be yudane-ing a whole bunch of versions for the next month or so.