Occasionally, although not recently, the question or concern pops up on TFL about when to swap out a blade, or the corner tip,  that has seen too much usage.  I've seen some answers that seem to be anywhere from after every bake and up, but not usually too far north of after every bake.  Keep in mind that the double-sided razor has 4 tips, which could take one very far before discarding the entire blade.

Some time ago I mentioned that I get numerous bakes out of a single blade tip.  Below is a picture of this morning's bake.  Now, I can't tell you with any accuracy how many bakes I've used this same tip for.  Each bake will have about 12-16 scores, and a few of these recent bakes have had fruit, seeds and/or nuts added, which should dull the blade that much faster.  What I can tell you is that I'm guesstimating at least 10-12 bakes.  Same blade, same blade tip.

Here is the "proof" that there is no need to get overly fussy or concerned that your blade tip has dulled too rapidly.  They will last! 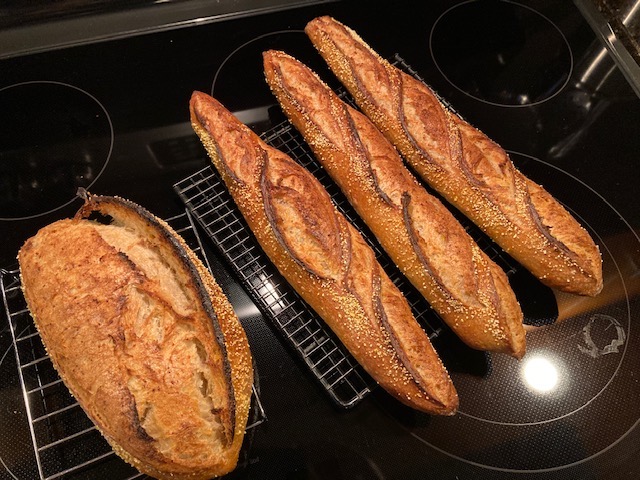 Just don't rely on grandpa Charlie's rusty blade that you found buried deep under the sink.

Fully agree. I use a double-sided razor blade also. lt lasts months before I have to replace it. I get a "feel" for when it needs renewing or turning to a new corner. I mostly use it as a curved lame.

I agree with both of you.  I honestly do not find that the blades dull very quickly at all. It takes me many many months before I need to switch to a new blade.

Also agree. I usually notice the age when slashing bread with seeds on the outside, then I switch. It takes many bakes for each tip of the blade.

Every time I swap out or rotate and then apply my lame's double edge razor blade, I find myself thinking "Oooo nice! I should have changed that blade earlier!"

That first use takes the lethally single-molecule-of-steel factory edge down to a sharpness that then declines relatively slowly over the next month or more of weekly service.  So if I'm looking to slash a higher hydration, over-fermented and/or warm proofed dough, I refresh that edge with a rotation or, if necessary, a swap.

I assume higher whole grain %-age doughs are rougher on blades than mostly-white doughs.  And inclusions like flax seeds -- forget it.