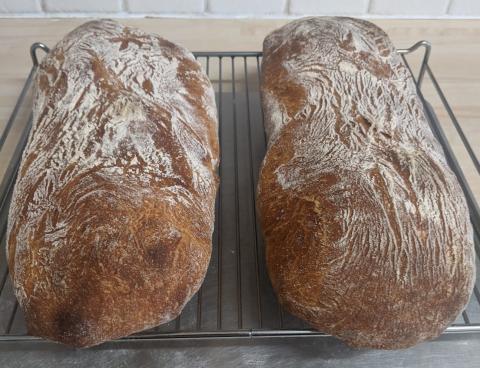 I finally got close to where I want to be with ciabattas!

I was going to a friend's flat for an Italian dinner yesterday, so decided to bring a ciabatta, although previously I only had partial success with this style of bread. However Rus Brot has a video recipe for ciabatta, and so far each and every recipe of his have been a great success, so I decided to risk it. The video is unfortunately only in Russian: https://youtu.be/beEhMiwIaHw

Here is the formula, except I increased the amount of CLAS to 5% by flour weight, since my bread flour is a little higher ash, probably: https://fgbc.dk/1so4

In addition, I replaced 20% of the flour with semola rimacinata, since I need to use it up soon, and seemed like a fitting bread to add it to.

The process is very simple. The dough is mixed using cold CLAS and cold water (I used, like him, a hand-held mixer with spiral attachments), and oil and some water are withheld. Then after partial development oil is incorporated, and then the remaining water, until very soft consistency - around 80% hydration in my case, all the while developing the gluten. DDT of about 25°C. Then the dough is transferred into a rectangular contained. Folded after 1 hr, and then it goes into the fridge for ~24 hrs. About half-way through cold bulk it's folded again. Before baking it's warmed up at RT for 1.5 hrs. Then in the recipe he does a few folds before dividing the dough and coaxing it into rectangle. I decided to skip the folds at this stage as I felt they would impede open crumb formation, and simply divided the dough in half. It's then proofed at RT for 20-30 min, and baked. I proofed on a couche, and flipped upside down when transferring onto a peel - like you'd do with baguettes. The very tip of one of them got a little stuck on the peel unfortunately, and I think it deflated that half of the bread a little. So I brought the other one to the dinner party. Baked for about 15 min with steam on steel, and then until I liked the colour without steam.

They looked stunning, even is I say so myself, with the beautiful pattern of flour on the crust. Crust was super hard and crispy out of the oven, and stayed so for a little while, but it's always lost here with the humidity we are having. I think addition of a little durum also helped with that. 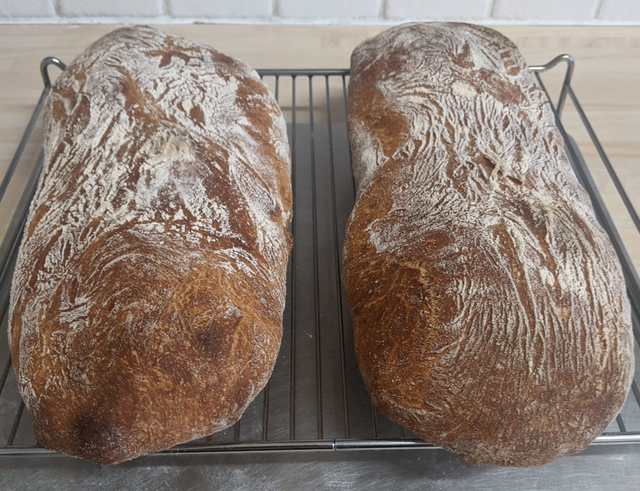 My friend took a couple of pictures of the food, which included the sliced ciabatta. Shows quite clearly that in some spots it had huge bubbles under the crust, despite being flipped before loading into the oven. Perhaps they could benefit from some light docking, but they were already huge and would barely fit on my steel, if they ended up being any longer it would be a problem. 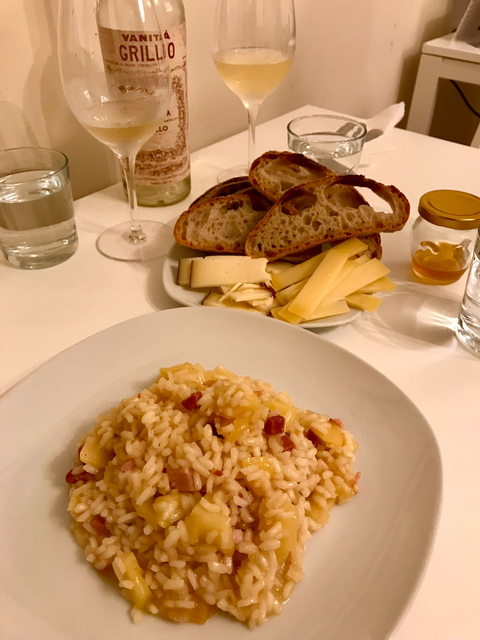 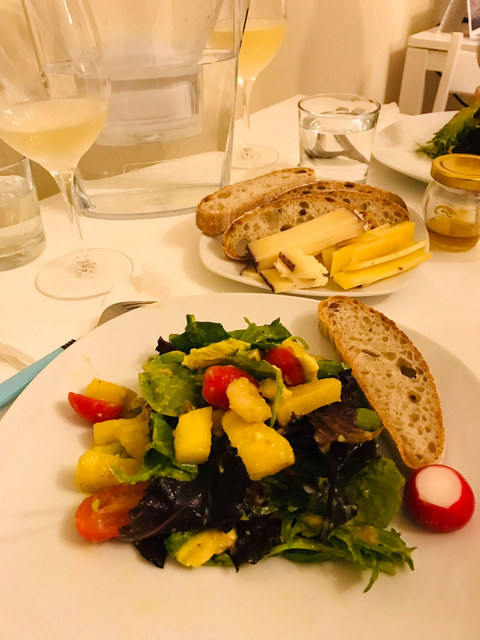 Here is the crumb of the one I kept at home. It's a bit different in different parts of the bread, some parts more open than others. But I'm not complaining. 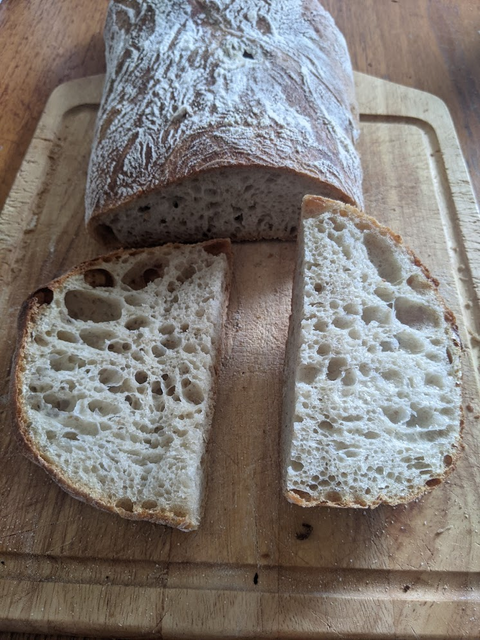 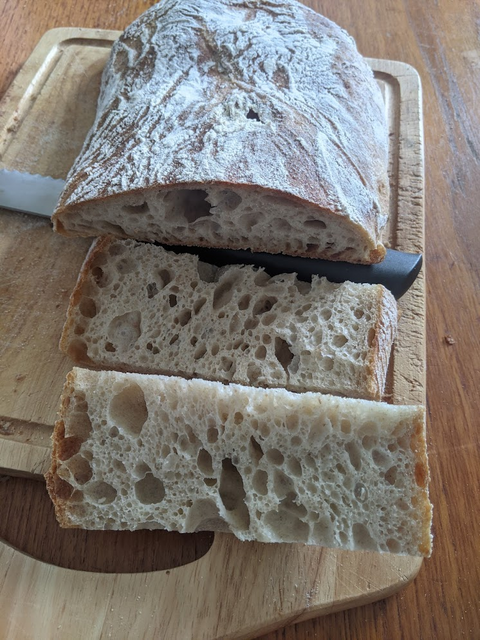 And it's delicious! It's awesome how easy it is to bake with just yeast for leavening, and CLAS provides such pleasant flavour. No overt acidity, but a nice lingering pleasant aftertaste, a bit similar flavour to when I tried making ciabatta with a SD biga back during the CB. Nicely caramelized crust. Light and fluffy crumb. I'm very pleased with this.

Thank you! It's certainly the best one I've made. Give CLAS a go, it's so easy to create and use, and the results are excellent.

It's particularly great for white and near-white straight dough, since you can use CLAS from the fridge (just prewarmed) and a "regular" (i.e. quite large) yeast quantity and have a quick rise, but get much improved flavour and other benefits like longer freshness. And comparing to SD, I get much softer and fluffier crumb typically. That said, I think I get a slightly better result than traditional SD with whole grain recipes too, but for that it's hard to be sure without a side by side comparison, flavour of the grain is strong on its own anyway.

You can pick any recipe from Rus Brot that you like (this playlist has English descriptions and subtitles: https://www.youtube.com/playlist?list=PLrSg5cYpPtU_NKto2xtoRpVtRsVs7kJq0), I think most of them by this point use CLAS. Or modify your own favourite recipe by following guidelines here - just replace the specified % of flour with CLAS: http://brotgost.blogspot.com/p/clas.html

For white breads, he has recipes for Palianytsa - very simple recipe with an excellent result, Yippee said that was her everyday bread. I loved the the focaccia based on his recipe, and the ciabatta too now, of course. I haven't tried the baguettes yet, but Yippee also posted them during the baguette CB I believe, and said they were great.

Hope you try something and report back!

Beautiful Ilya, your CLAS ciabattas are a big success.  I especially like that you were able to achieve that tree bark like pattern in the crust.  I like that you also used some semola rimacinata.

Thanks Benny! I also love this somewhat rustic look. I don't think durum is contributing that much to the flavour at this low percentage (and I hoped the yellow colour would come through a little more as well, tbh), but probably adds a little extra crunch to the crust.

The "bark" looks soooo beautiful, Ilya! I've got to make this delicious bread sometime! Lately, I've been so busy with gardening/landscaping that I hardly bake any bread. The strange thing is, I've started gaining weight when I don't eat bread and tiramisu! So I must start making and eating them again! Did you find out why Rus specifically retarded this bread?

Thanks Yippee, I really like the look too! So pleased to finally get it.

Bread and tiramisu for weight loss? You should start a new diet fad! I'd be up for that one.

I actually asked him in the comments. He didn't really answer, although he described the difference is makes: a chewy (he called it "rubbery") crumb, and European flavour (similar to 25-26°C fermentation, as opposed to ~30°C for the Russian flavour). Also in his opinion it promotes a more open crumb, but I'm not sure that's true... But this approach actually makes it into a very easy hands-off recipe, might be perfect for busy people like you :)

Perfect, just perfect. Love the waves in the crust. You're making me want to try CLAS, that bread is a great advert. Perhaps some olives would make it even more perfect....

Thank you - I don't like olives myself, but you should go for it! :)