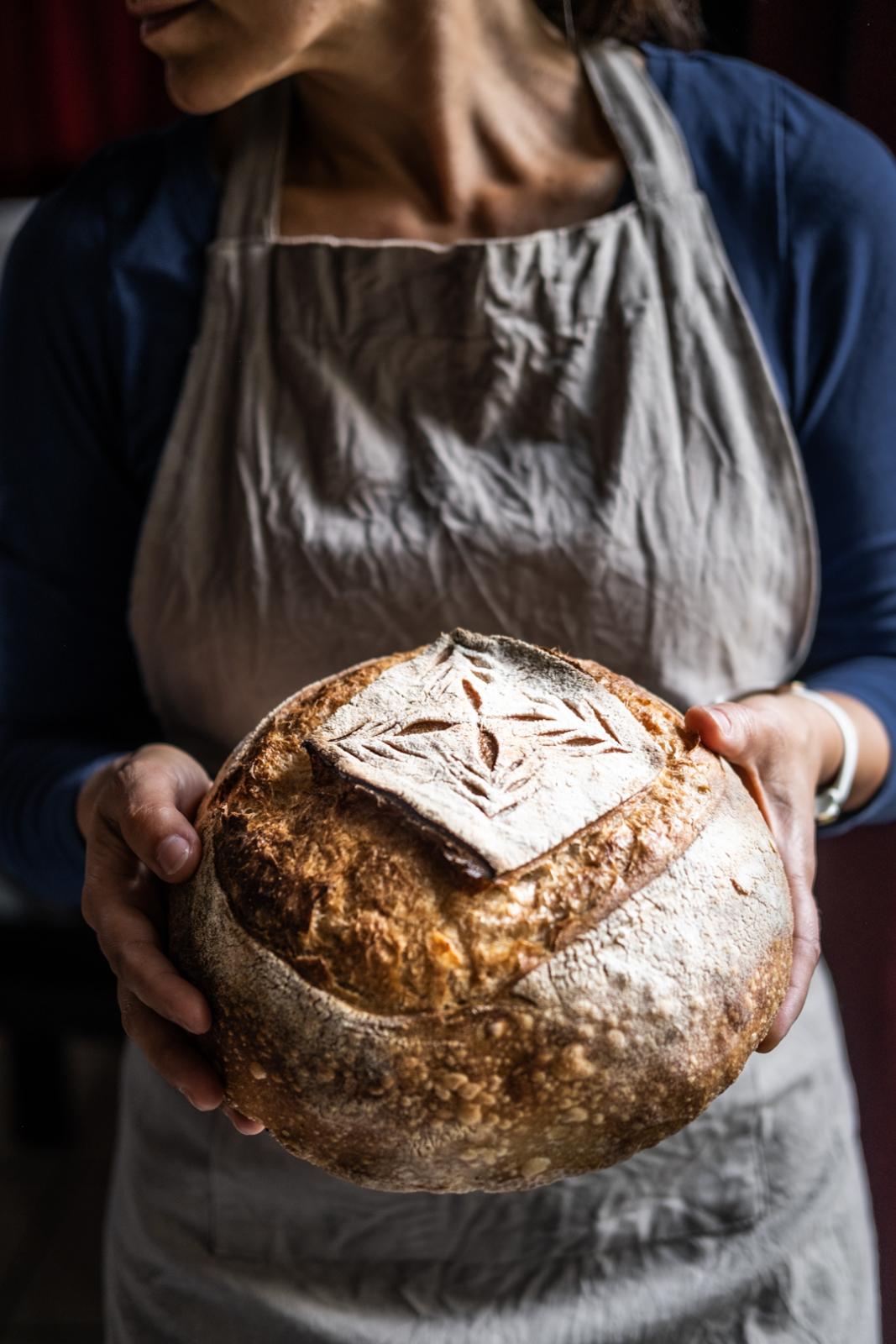 Before arriving at this recipe I made 3 more attempts and I treasure more the journey than the final success. Yes, my 4th attempt was the one that I was looking for, but the first 3 taught me more.

The final recipe (the 4th attempt) was: 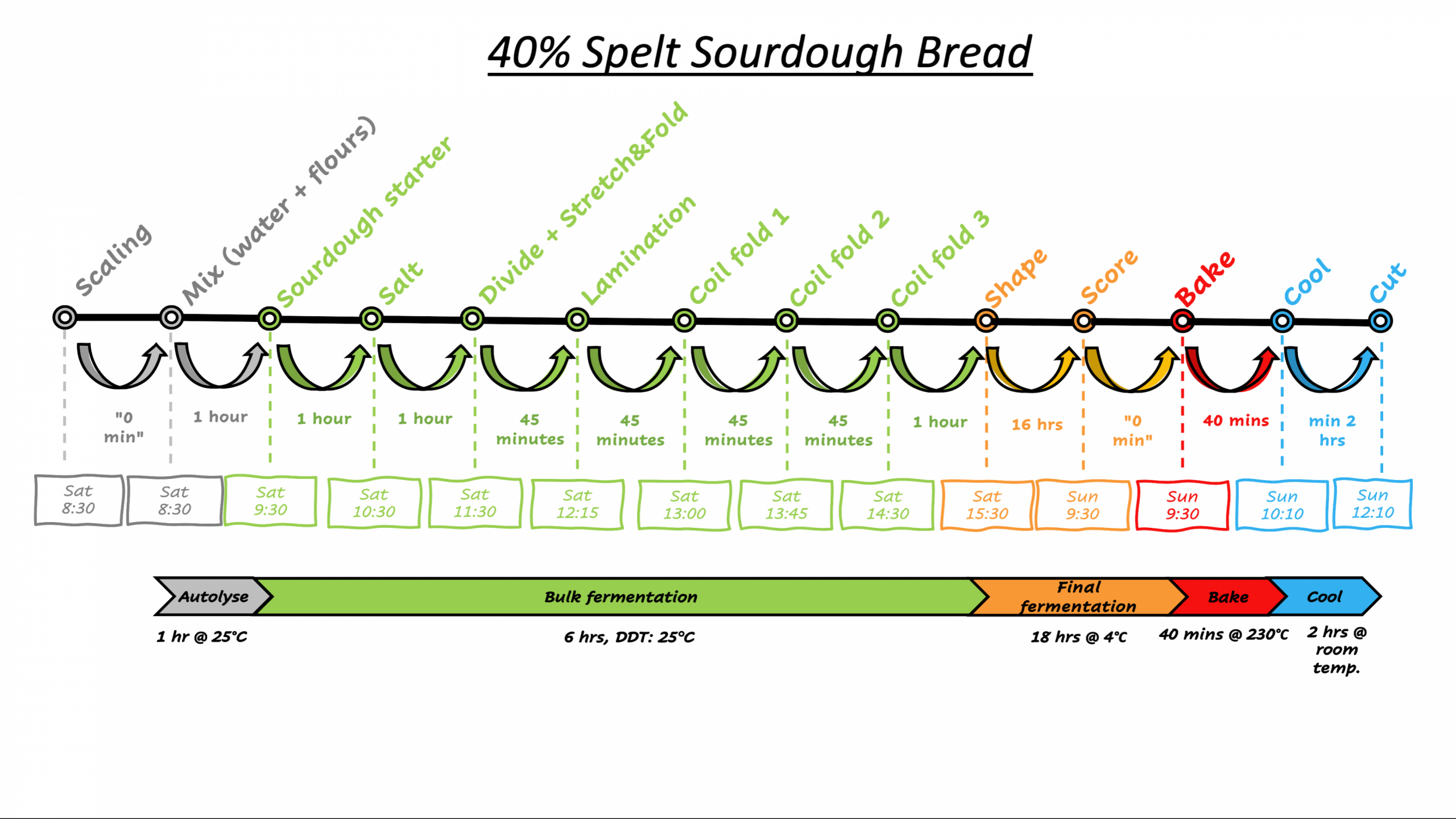 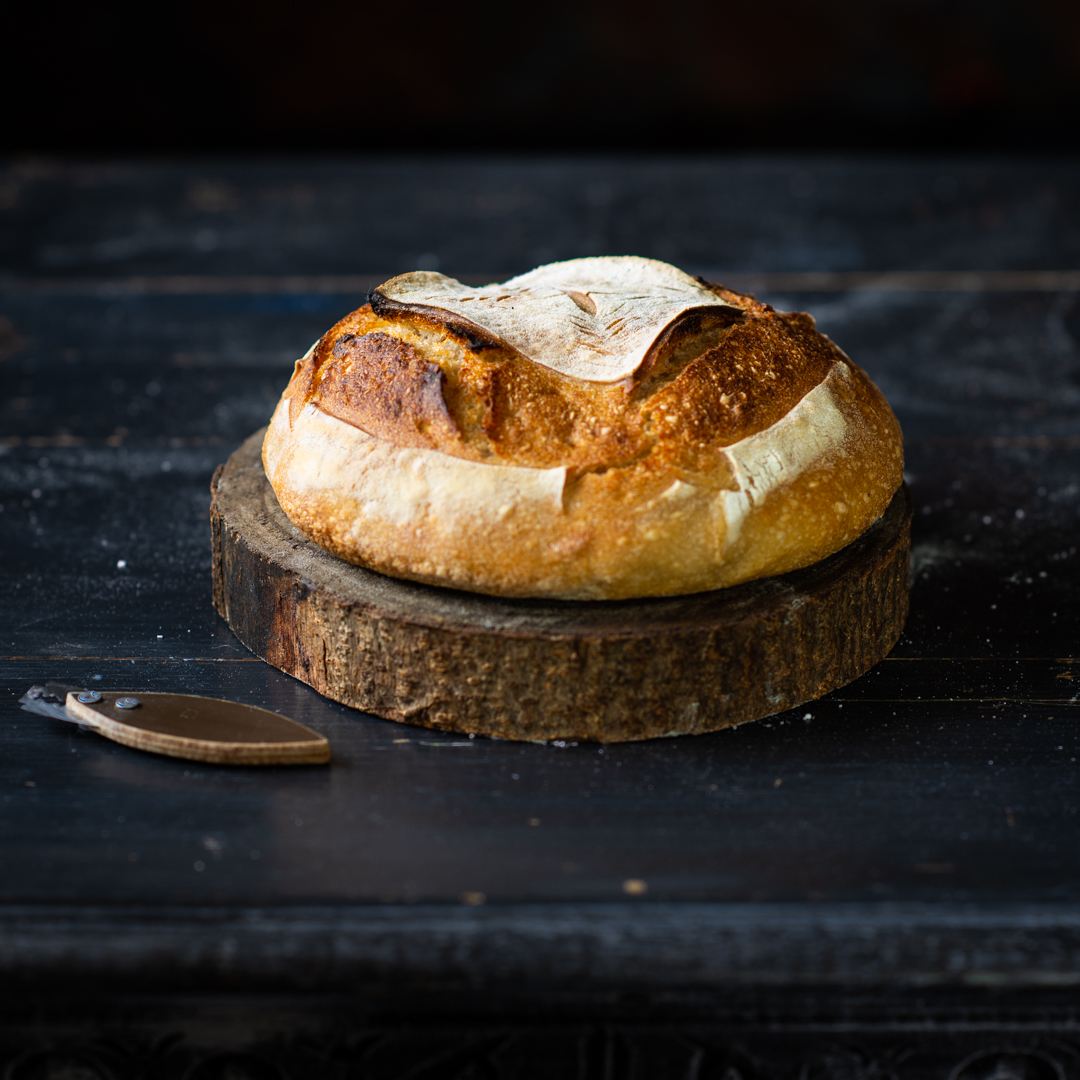 I knew few things about spelt flour and what to expect from it. But it is only when you try it that you really feel the difference.

- does not work well in the very hydrated dough. The spelt flour has less water absorbency.

- it is very extensible

- it has a low % of gluten while high protein content.

- ii has a weak gluten quality (The 2 components from gluten are unbalanced. Gluten in spelt flour is high in gliadins, meaning that its stretching is improved and is low in glutenin, meaning that the elasticity suffers and the structure to hold its shape is affected.)

- it rises quickly and over proofs at a lower volume increase

For this initial attempt, I tested first the recipe at 75% hydration (meaning 730g water). I performed 4 coil folds, shaped the bread at 50% volume increase but let the dough rise up until 75% before the overnight fridge retard.

The result showed that even with 4 coil folds, the structure was a challenge; the hydration was too high and I've got a very wet dough feeling when shaping; 75% volume increase looked over-proofed; the loaves were flat despite the above, the taste was fantastic. 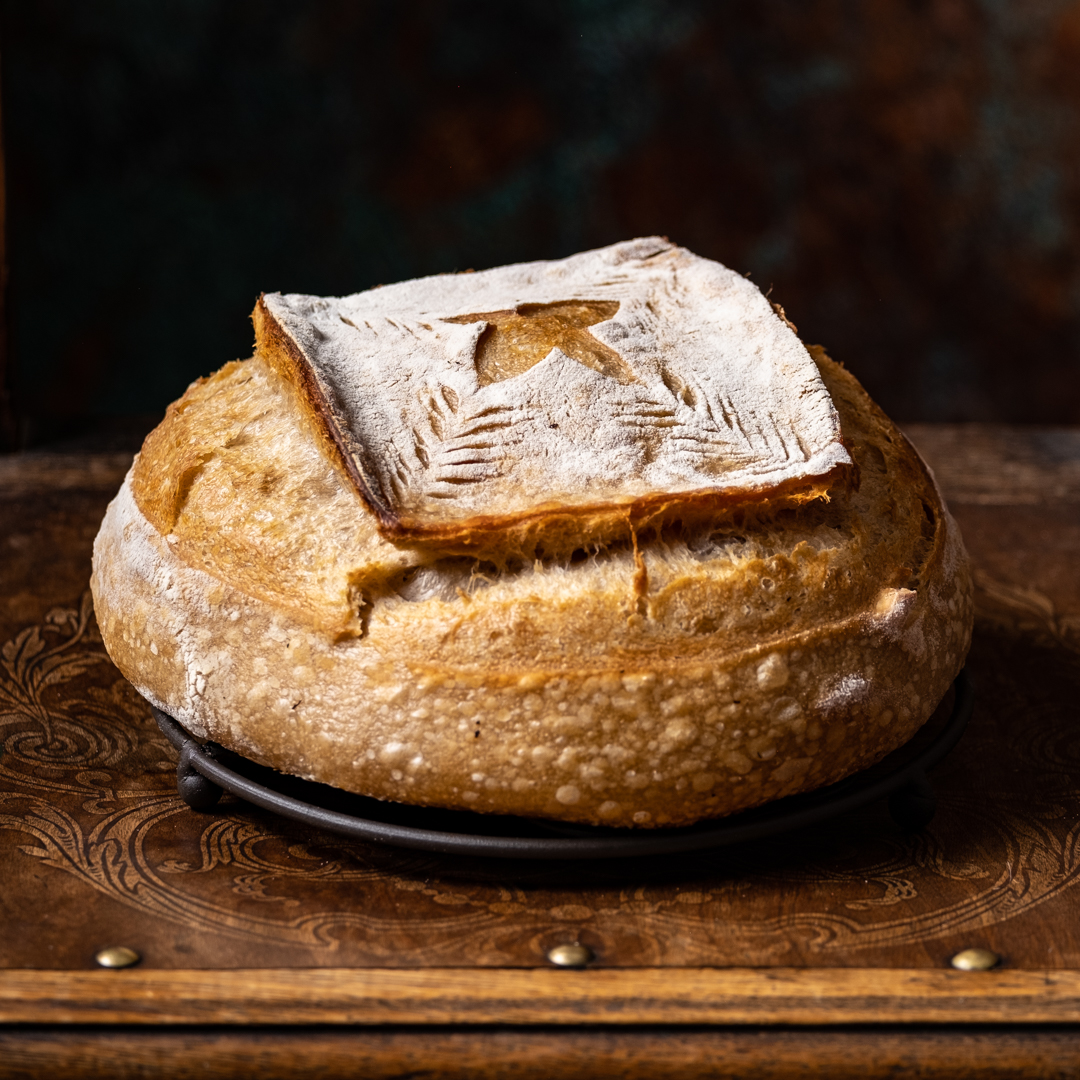 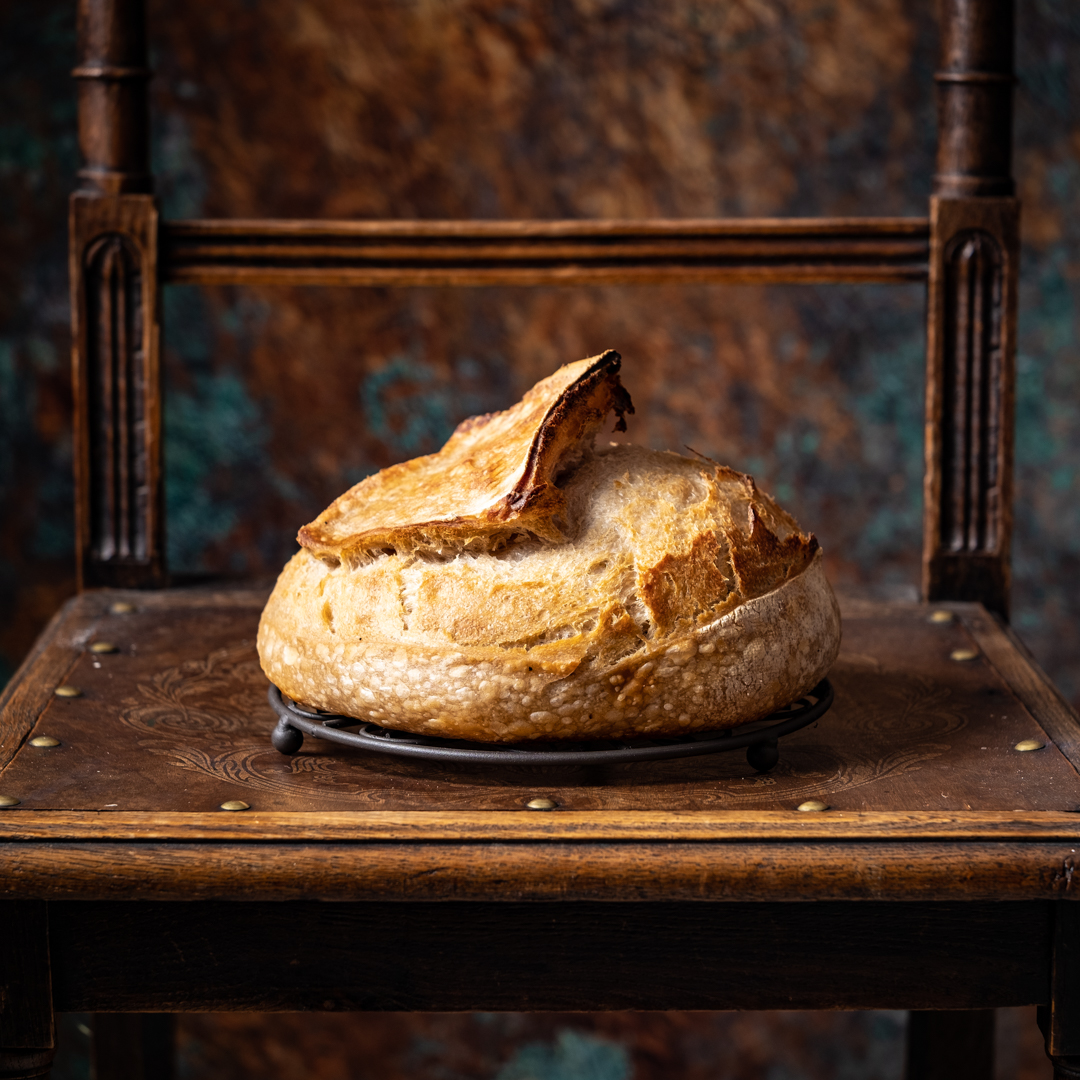 It was clear that I had to jump down to 70% hydration this time and the dough behaved nicely in my hands. Also, the structure was easier to build.For the percentage of volume increase, I stepped down also and shaped the dough when it was at 50%. Then, it went in the fridge overnight, after 15 minutes of resting in bannetons at room temperature.One of the loaves has a gorgeous detachment of the ear. But, an exaggerated ear is a sign of "it could have fermented longer". I was right to guess that it was under proofed. The crumb aspect just confirmed it: dense crumb with big holes looking like a chain of caves/tunnels is the proof of under proofing.Another lesson learned: while dropping the hydration was a good idea, dropping the volume increase during bulk at the same time, was not. 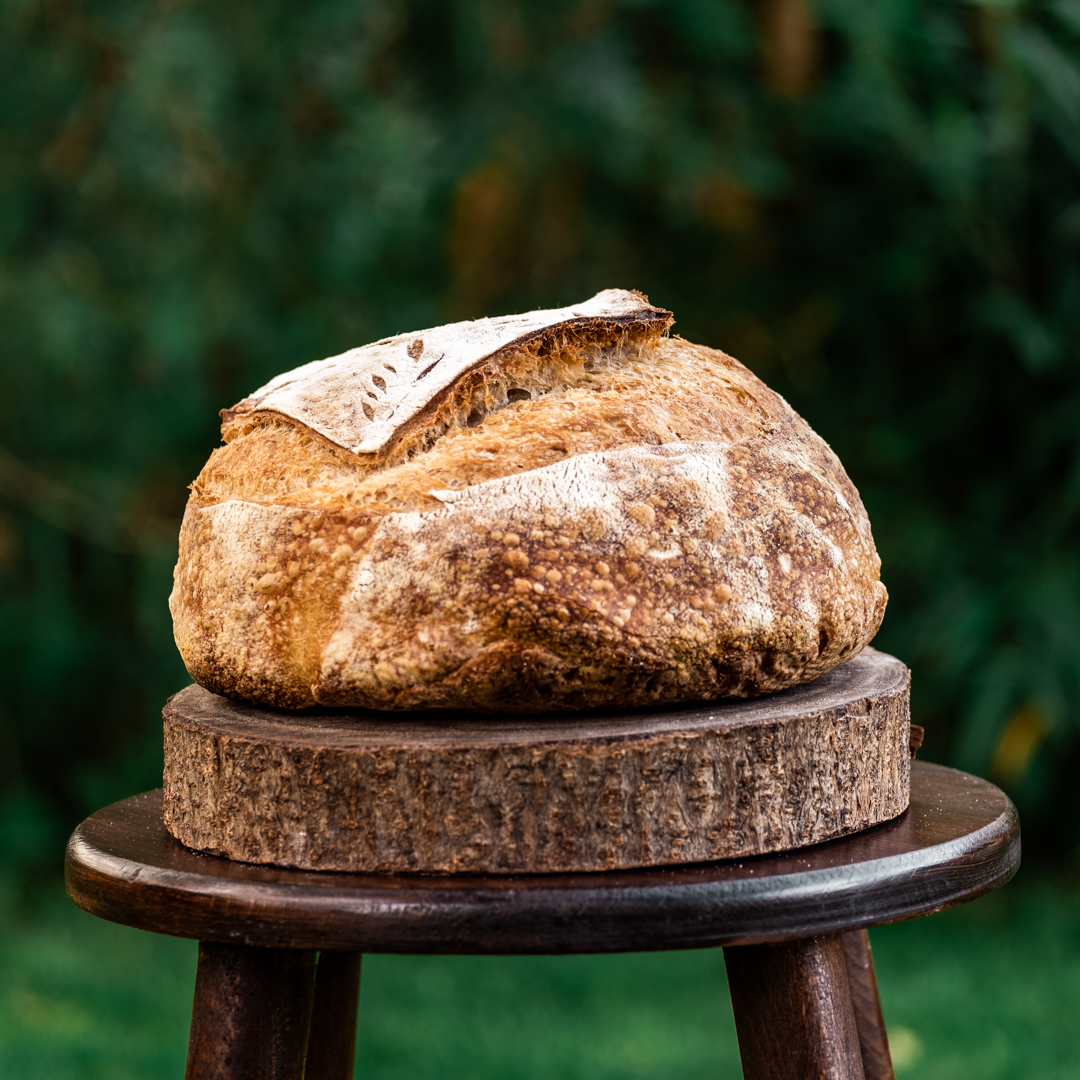 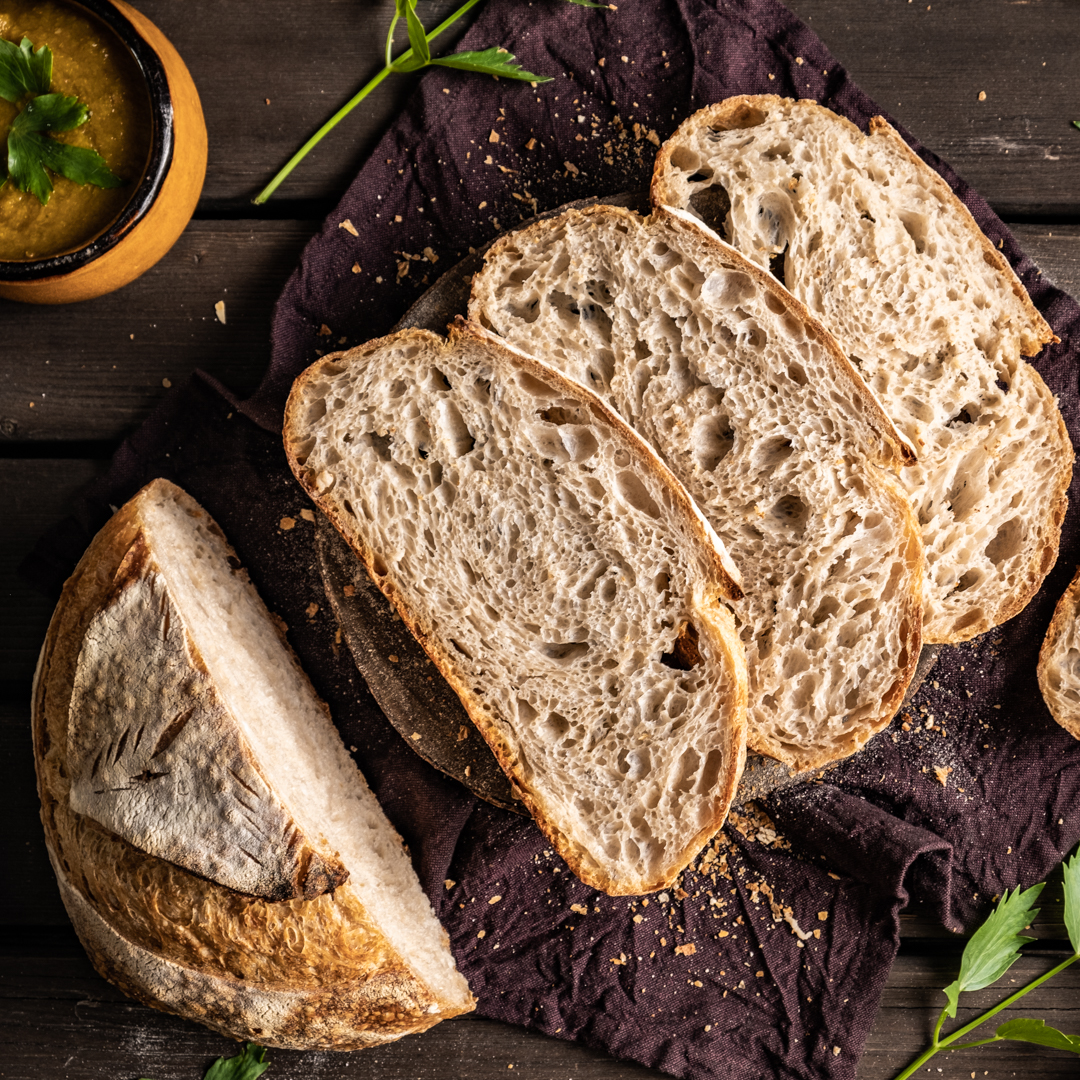 As you may notice, the result was a lovely risen bread, with an impressive height. The ear in this case was less dramatically opened because the dough expanded to a good state internally during the proofing stage rather than in the oven and had very little power to push the ear up.The second loaf (not in these photos) was flatter with a less height than this one, making me think that passed a bit on the over-proofed side.Without even seeing the crumb, I could have easily guessed that this bread had an open crumb inside and I caught to bake it in the very last moments before starting to collapse.Oh, yes, this is what you can call an open crumb bread. The loaf is super light in your hands and you can guess even without cutting it that you get an airy crumb.For a round loaf, this is quite a nice crumb as usually, you get more chances of an open crumb using oval bannetons rather than round/squared.If my target was just the open crumb, then I would have stopped here with the recipe development. I love open crumb bread but I also know that this is a risky business. You need to extend the fermentation to the maximum and catch the dough at the very right moment to get it like this. The first loaf was great but I cannot say the same with the second one from the batch. It was flatter and less open crumb than the first one, although still a lovely loaf. What was the difference? Well, could have stayed more closer to the door of the fridge and it fermented faster. I would have then preferred to stay more on the safe side. I tried this bread at 50% volume rise and it was under proofed. At 75%, it was to the over-proofed limit. A perfect bread should have been fermented somewhere in the middle.

4. The fourth attempt (this recipe) 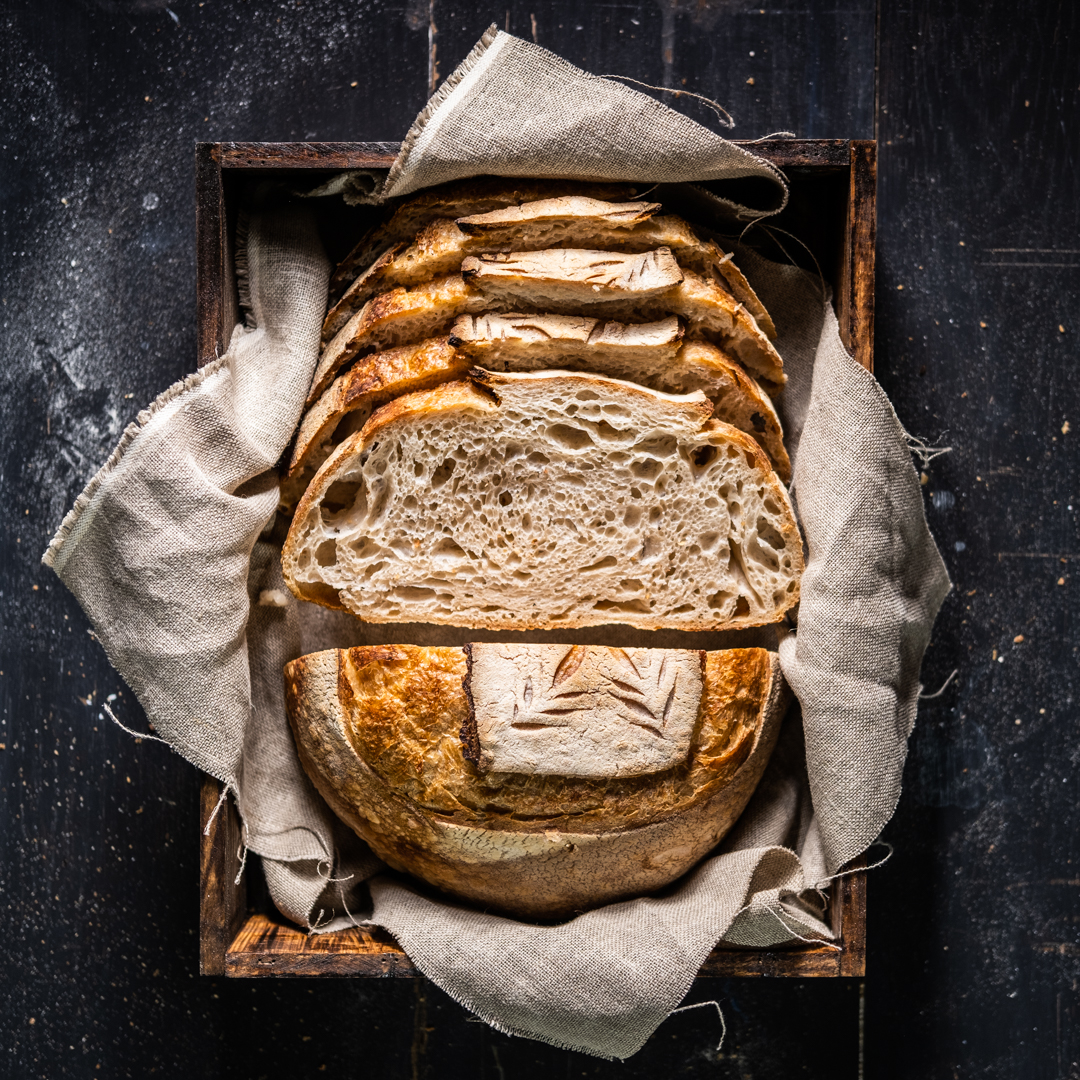 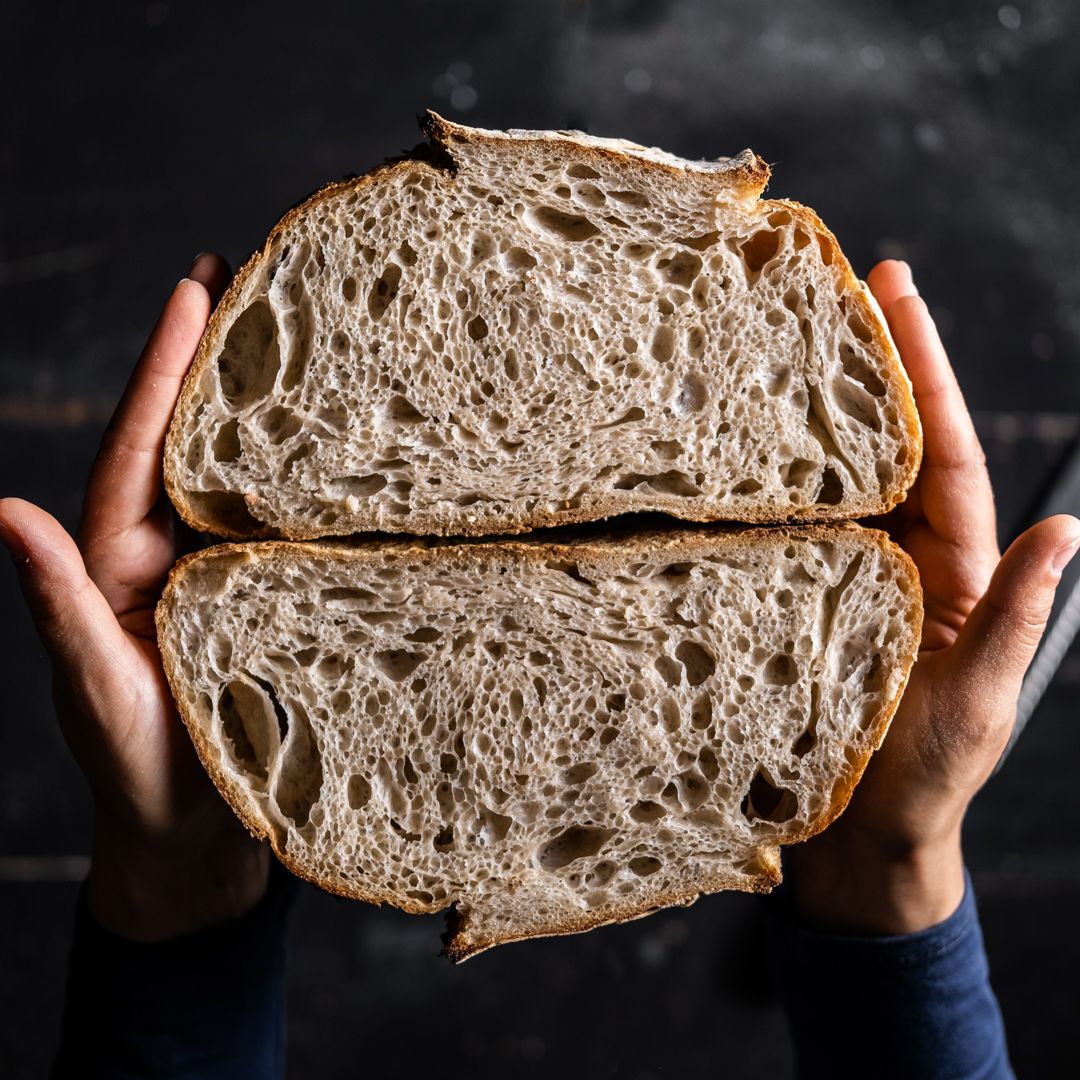 With my second attempt at this recipe, I saw that a 50% volume increase was not enough and bread turn out under proofed. With my 3rd attempt, I saw that 75% was at the limit of collapsing due to over proofing. I've learned my lesson and I had only to ferment it in a range of 50-75%. I picked 65%, but this may be a matter of preference. I wanted an open crumb (not a super open crumb) and I've got it. Spelt dough reaches the over proofing stage faster than wheat flour so then I had to find the sweet spot.There are some things I cannot show you with photos: the taste and flavour. There is a sweet taste and a nutty flavour that the spelt flour brings to bread. It reminds me of rustic/medieval loaves. I put together the process of the 4th attempt and the experiences I've got on the first 3 attempts in a video on youtube:   I am sure that most of you making your own recipes have similar baking journeys. Is mainly when you try them yourself can really learn to bake amazing loaves. Denisa.
Share

Great loaf and great work Denisa! I like your stepwise write up and you are tempting me to give it a try!

Thank you, Lance! I actually found an organic white spelt flour at my local supermarket and I wanted to give it a try. I was not disappointed. Otherwise, I have a 5kg bag of organic whole spelt from a local farm on my shelf that I cannot wait to test also :)

I triedmany recipes with different flours and different qualities of flour, but this one is a keeper for me. I hope you like it if you try it!

Wow.  Down the line agree with albacore.  Blown away, Denisa!  Beyond how beautiful your bread looks, like albacore says, thank you for the extraordinary write up.  Spelt berries sitting asleep in my larder......hmmm....

I bet the little microorganisms from your sourdough starter are eager to eat the goodies from the spelt flour sitting in your ladder. I also bet that you'll enjoy the flavour that these little creatures will create in your baked bread. Give it a try!

Another wonderful set of bakes with the final being perfection Denisa.  You are very patient with your recipe development and the results show.  As always your photography is also top notch.

Benny, I admire your work also and not once you inspired and motivated me to bake bread! Thank you so much!

Beautiful loaf, but your presentations always take it to the next level. (I also love your nature photography).

Thank you so much, Richard! Baking bread and photographing nature/life are my greatest passions.