Tried to make a French-style rye bread following this recipe from Stanley Ginsberg: http://theryebaker.com/sourdough-tourte-de-seigle/ The recipe is very simple, but also very different from what I am used to (i.e. very short fermentation times, very high hydration for hearth bread, basically no shaping).

I halved the amount to make just one bread. Due to that on top of using warm water to mix the different stages, I also kept the dough in a warm place at about 28°C - I thought a smaller mass would lose the heat faster, and the fermentation times were scary short. The first stage more than doubled overnight (not tripled though, like said in the recipe, but I've never had my rye do that). I gave full 2 hours for the second stage, despite warm temperature, since I didn't observe any clear cracks or broken bubbles at 1.5 hrs. The dough however looked ready at 1.5 hrs with some broken bubbles on the surface.

The final proof is ridiculously short. Checking out the original video Stanley Ginsberg used as a basis for his recipe, the dough is not shaped at all, just scooped into generously floured bannetons and left for 15 min. I lined the banneton using my linen couche and generously dusted it with rice flour, and dusted the surface of the dough in the bowl with white rye flour. Since I just had dough for one bread, I simply inverted the bowl over the banneton and made the dough fall down, and scooped what stuck tot he bowl on top, and gently smoothed the surface. Left for 15 min again at 28°C.

Baked on a preheated steel without steam, generally following the instructions. But figuring out when to stop baking was tricky, and I might have stopped too soon: with the bread covered in flour, it's hard to see the colour of the crust. I tapped the bottom of the loaf and thought I heard good hollow sound, although time-wise it was quite a bit sooner than in the recipe. I gave it extra 5 min just in case, and pulled out.

Left to cool and only cut this morning for breakfast, it was baked around 1pm yesterday. 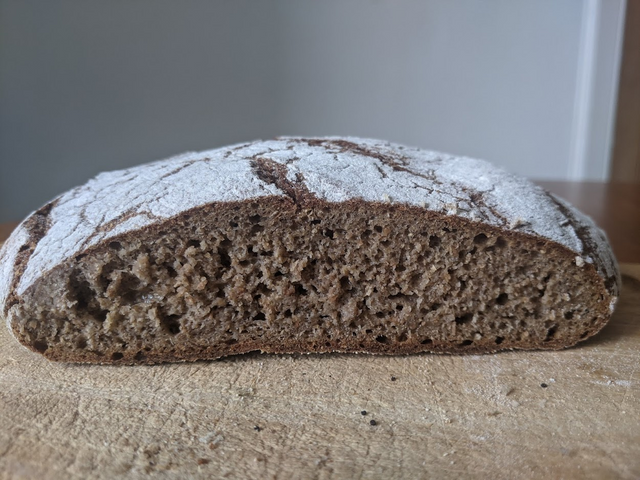 As you might be able to see above, the center is just a little gummy and a touch sticky. It's not terrible and still completely edible, but could be better. So I wonder if it's a little underbaked, or there is an issue with fermentation. I found it difficult to judge the fermentation here, since the times are so short, and in particular the final proof. But still I'd guess it's slight underbaking, since I baked for a significantly shorter time than in the recipe: only about 40 min vs at least an hour.

The flavour is very good anyway, very clear rye taste and a nice aroma! I might repeat it at some point and bake more thoroughly to evaluate it more fairly. The recipe is incredibly simple and very quick on the baking day (as I said, starting the second stage in the morning, the bread was baked at around 1 pm!).

That looks fantastic. When I made this 9 months ago, I had to bake the loaves for 75 minutes (almost 2X your timing) before I got a nice tubby sound when I tapped the bottom. I'm wondering what rye flour you used. Mine was quite coarsely ground -- from Farmer Ground Flour in NY -- and that changed the texture of the loaves a bit. My loaves had a similar sticky spot -- but that got much better about 36 hours after baking.

Perhaps I'm reading too much into the dispassionate tone of your post, but you sound a little unconvinced by this recipe. I didn't know much about what I was doing when I baked it, and perhaps that's why I liked it so much. It was the first 100% rye I ever baked. I still think it had great flavor and aroma. And it's so damn simple to make.

I think mine might have baked quicker because of the steel, it transfers heat very quickly. But I guess it's still a little underdone. I hope it gets better with time indeed! Waiting has helped me in the past with similar problems, but I haven't had this issue for a long time.

I used Scottish roller-milled whole rye flour, locally grown and milled. I've mostly used it for my rye bakes and use it for my starter.

I think I need to bake this again to know for sure what I think about the bread. A lot of people clearly enjoyed the results greatly, judging from the comments, so I didn't do it justice probably. Flavour and aroma of rye are certainly there and very nice, and indeed it's super simple and quick!

Ilya it is certainly a handsome loaf.  I can see how hard it would be to judge based on the crust with all that flour on it.  Hopefully the flavour will be to your liking with a bit more time.  As you said, it might need a bit more baking time next time.

Indeed, that's what I hope for. I think I got used to lower hydration rye breads and underestimated both the baking and drying times.

1. I baked in winter, so my room temps for fermentation/proofing were never higher than 22-23 C.

2. it might be interesting to compare the alternate recipe Ginsberg also has on his blog that uses a sourdough sponge and a yeast-spiked sponge: http://theryebaker.com/tourte-de-seigle/

I'd be curious about the recipe in the video linked in the recipe page, where the recipe is adapted from. I don't speak any French, and info in the subtitles is minimal. If anyone here can translate the temps and times there, I'd be very grateful.

Heating up a slice of slightly gunny bread in the oven makes it really nice, actually.

... maybe with some bleu d'auvergne on it

No blue d'auvergne, but I am indeed eating this bread with blue cheese :)

blue on rye: you're making me hungry

If you think it is still underbaked, try rebaking in the microwave.  The waves head straight for the wet spots.  You may have to cut equal sized portions like 10x10cmand zap for a few minutes. Let it cool before slicing.

Ah that's smart! I might try that, thank you Mini.

I am hoping the main issue is underbaking, and not wrong fermentation. Is there a way to tell which it is?

Thing in France and the crumb is a bit gummy and sticky. I just remember it having a bit of a more open crumb.

The lady that made it used and old wringer washer to mix her dough and baked it in this gigantic wood oven. You had to get there when she opened or you missed out since all of her bread sold in minutes!

Well done! It’s not an easy loaf to make.

Wow thanks Danielle! I'm so surprised the real thing would have a gummy crumb! AFAIK in Germany/Eastern/Northern Europe sticky or gummy crumb is always considered a real issue, and I can't say it's a very enjoyable property for me either... Perhaps people were supposed to age it after buying? But I guess I at least wasn't far off the mark then, thank you again!

I remember thinking that this loaf is awfully wet. It was also very chewy with a tough crust. The taste was unique but very enjoyable. I wish I knew more about bread back then. I would have appreciated it much more.

So interesting. Was the "wet"/gummy aspect enjoyable, like the taste?

Since at that time, baguettes and commercial whole wheat bread was the extent of my bread eating experience aside from buns. I did grow to quite like this bread.

OK, thanks a lot for sharing your experience with the real deal!

last night and sliced it this morning bc I was hungry. the taste is great -- with a kind-of sweet nuttiness to the sour. The texture isn't all that bc it needed to set more. Thoughts? Yours looks great! Better crumb than mine, no gummy bottom. It will likely improve with more time.

Interesting that yours is also much taller! I wonder if my dough was too wet...

Rob and Ilya, I’ve seen a couple of recipes for this bread and I’m going to try baking this on the weekend.  I’m wondering if you steamed in the first part of baking or baked without steam?  One recipe calls for baking without steam on a steel/stone while the other calls for baking in a dutch oven or with steam.

bc I felt I had too much flour on top of the bread.

as long as you bake one loaf at a time, centered, the anova oven seems to do a damn good job with high %age ryes.

Thank you Rob, so you wouldn't have used steam if you hadn't felt that you had too much flour on the dough then?  I guess in general this type of bread doesn't require steaming then for better rise.

Ginsberg calls steam optional for thos formula. I decided to opt in bc I feared the outside would be too dry without it.

I took the quick proof time super seriously and didn't give it more tan 10 or 15 min.

We should call this the Tourte de Seigle Community Bake!! I didn’t find the crumb to be gummy, but it is a bit too bitter for my tastes.  It was fine loaded up with cream cheese, capers and smoked salmon though!  Probably a bit over fermented as I let it overproof while in the banneton.

Haha you are right! We had a rye CB, but it was focused on much lower rye %, nothing like this.

helped to make a swirling pattern in the crust.  The swirl in the crackle looks so beautiful!

Perhaps a twist of the dough before hitting the flour in the banneton.  Maybe using a flat surface or open hand.

Hi Mini, in fact the bit of swirling cracks was secondary to my spinning the dough on the countertop.  I suspect that if I did that even more it might cause even better swirling cracks.  I didn’t do it for too long because I knew it wasn’t creating tension, had I known that it might create pretty swirling crackling I would have continued on longer.

I was looking for!  :)   Often done with forming rolls with a roll in each hand (loosely caged) spinning to make tension using the counter top.

I think it worth a try to spin just a little bit more and see what it does.  it could be a disaster or a discovery!

Remember to cut using a long sharp straight blade with these high% ryes.   :)

I doubt it would be a disaster so long as it isn’t sticking excessively.  That will be something to remember to do next time.

Wait are you saying not to cut with a bread knife?

...about the rye dough, if it starts sticking a light wipe with a wrung out cloth might help. Too much water would make a spinning mess.  I wonder if several spinning small loaves could be joined into a larger one.  Might look like the Caribbean in hurricane season as viewed from satellite. Keeping it simple is key.

(Is that a unicorn in crust?)