Would like to get some tips on usimg KA Pro 6.9L

I tried using KA for small batch of dough in the microbakery.

i use it mostly for baguette doughs around 1.5kg of flour at 70-72% hydration. My dough always look like the gluten has been destroyed. Speed 1 at around 5mins and the dough is destroyed. I use a high protein flour at around 12%.

I dont know what Im doing wrong. The mixer is similar to what Richard Bertinet is using. I tried his method but still not good. Im using a dough hook as well just so you know.

Any help would be much appreciated

It’s pretty hard to destroy gluten in 5 min by any method. How are you evaluating it? Any photos? The more details you share the better the advice that you get will be.

Doughs can fall apart before coming back together. Have you tried letting it go for, say, 10 min?

thanks for your response. Yes I am aware that it is really hard to destroy but in my case, that is whats happening. First photo is 3mins on speed 1. If you look at it the gluten is ready in my opinion. Then again I do bassinage, hence the 2nd photo. Thats only 5mins and gluten is breaking down. I tried going longer, all that has happened is that the dough kust heat up and turned more soupy. I dont really get it, what am I doing wrong? Again Im using king arthur flour w 12.7% protein. Im using cold water as well to balance the heat if ever the mix is long. At 3-5mins the flour is not heating up obviously. Appreciate your help buddy. 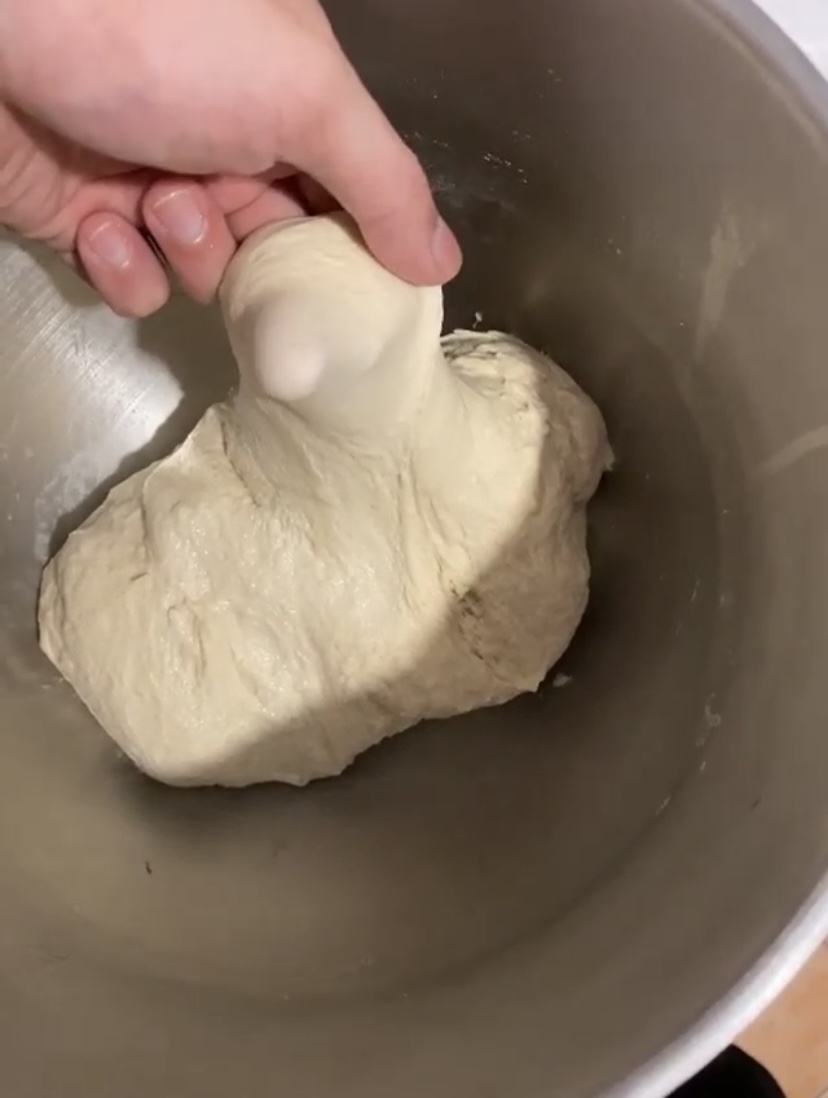 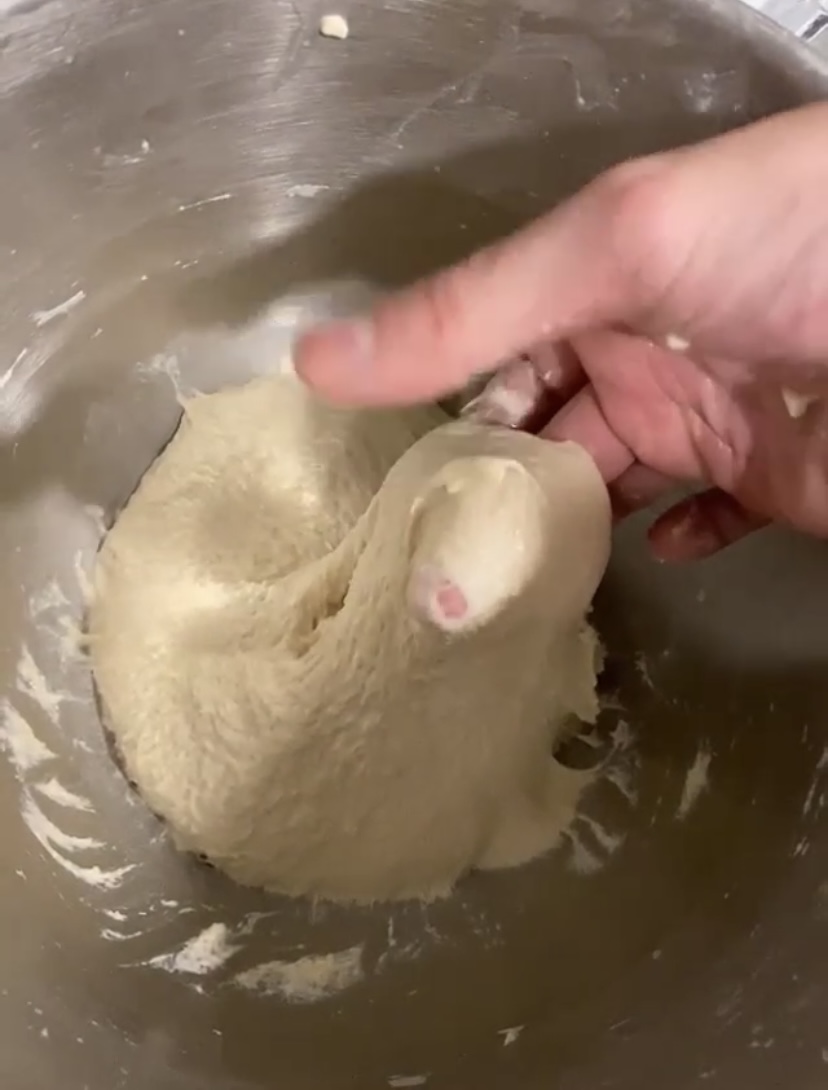 When you say your dough is 70-72% hydration, is that before the bassinage? If so, what is the final hydration? Post your formula.

Are you using yeast or poolish or pate fermente? Or is it sourdough? Which King Arthur flour are you using?

My understanding is that baguettes are typically around 65% hydration with a lower protein flour, so a 12.7% protein should be able to take additional water. I don’t often use bassinage personally, but when I do it is hand mixed so I can feel how it is incorporating. The second photo and your description says to me that it may just be over hydrated. The window pane in your first photo looks decent. A good windowpane can be stretched several inches without breaking. Maybe you don’t need the bassinage at all. What happens to the final loaf if you leave it out?

Formulas don’t always translate perfectly to your situation. You have to read the dough and adjust accordingly. This takes some experience so keep doing it until you get the results you are looking for.

Sorry for some incomplete data.

Basically I start off with 65% so thats the first photo above, then I add 5% more for bassinage after 40mins autolyse and continue with the mix.

bassinage 50g to make it 70% hydration

I'm using a 100% liquid starter to add some more data. Im used to doing bassinage in a spiral mixer that’s why Im trying to inculcate this process with the kitchenaid. Apparently this is not working for my case. Maybe you are right that I dont need to do bassinage anymorewhen using the kitchenaid. Thing is I tried to do the same process in my spiral mixer (well with bigger volume of course) it works perfectly fine (w bassinage and around 72% hydration). So its just really weird why I cant do it in the kitchenaid.

The result of the baguettes were great, I tried developing the dough through a couple folds to have it silky smooth. What do you think is the culprit here?

Its just weird for my process to fully develop the gluten through folds, thats why im trying to use the kitchenaid to save time on developing that gluten and just continue with minimal to no folds afterwards . 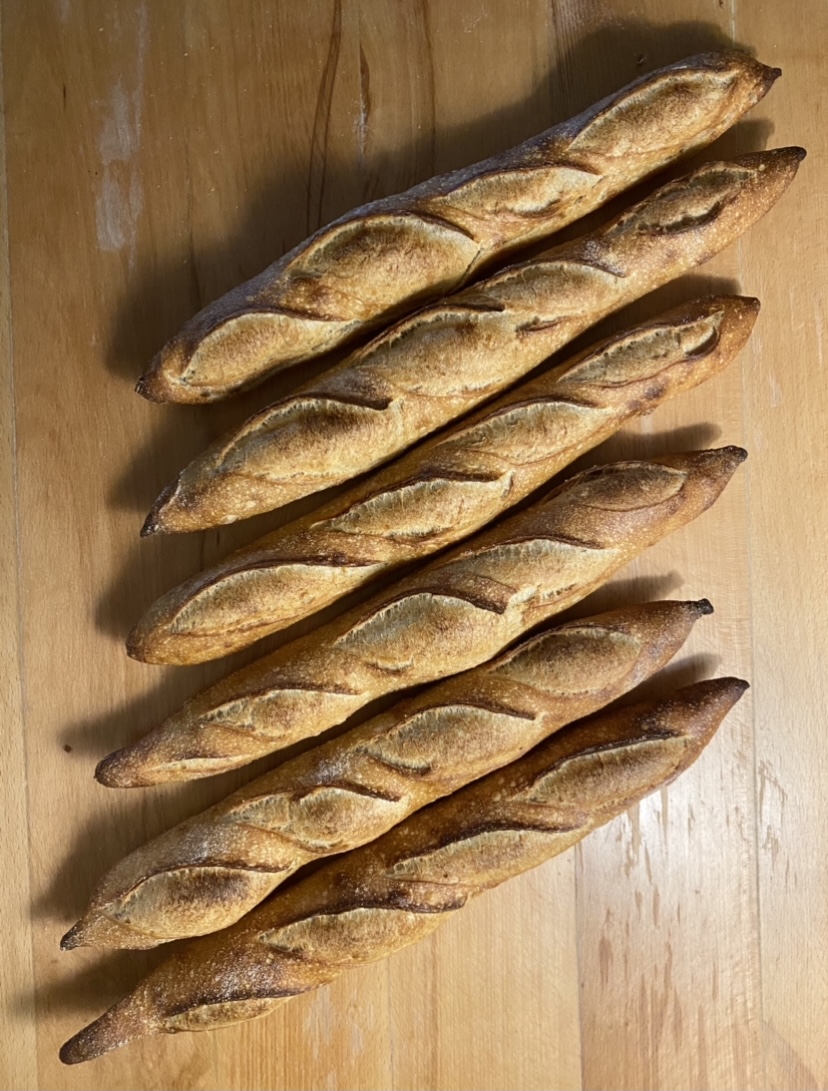 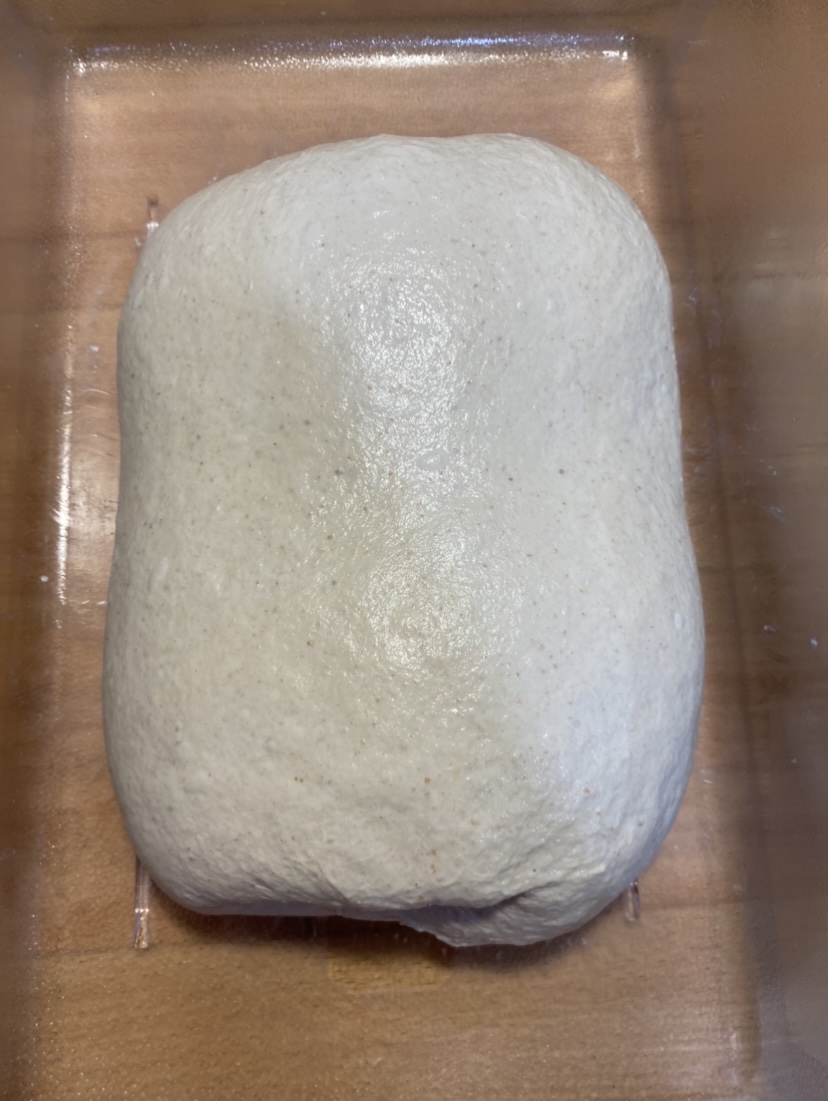 Those are beautiful baguettes!

It is quite strange that the same formula that works in the spiral mixer doesn’t work in the KitchenAid. I have no experience with a spiral mixer since I’m strictly a home baker. I have a 5.5 qt KitchenAid that I use for a few breads. In case you are not aware, there are 2 different dough hooks for the KitchenAid. The standard issue that I call a j-hook and one that looks more like a spiral. The spiral is made for a larger mixer but I use it without any problem on my 5.5 as long as the volume is kept to a point to minimize stress on the motor. I’m probably shortening the life of the mixer, but oh well. It may be worth your while to try the spiral (if you are not already using it) since it will make the action closer to what you use in the spiral mixer. 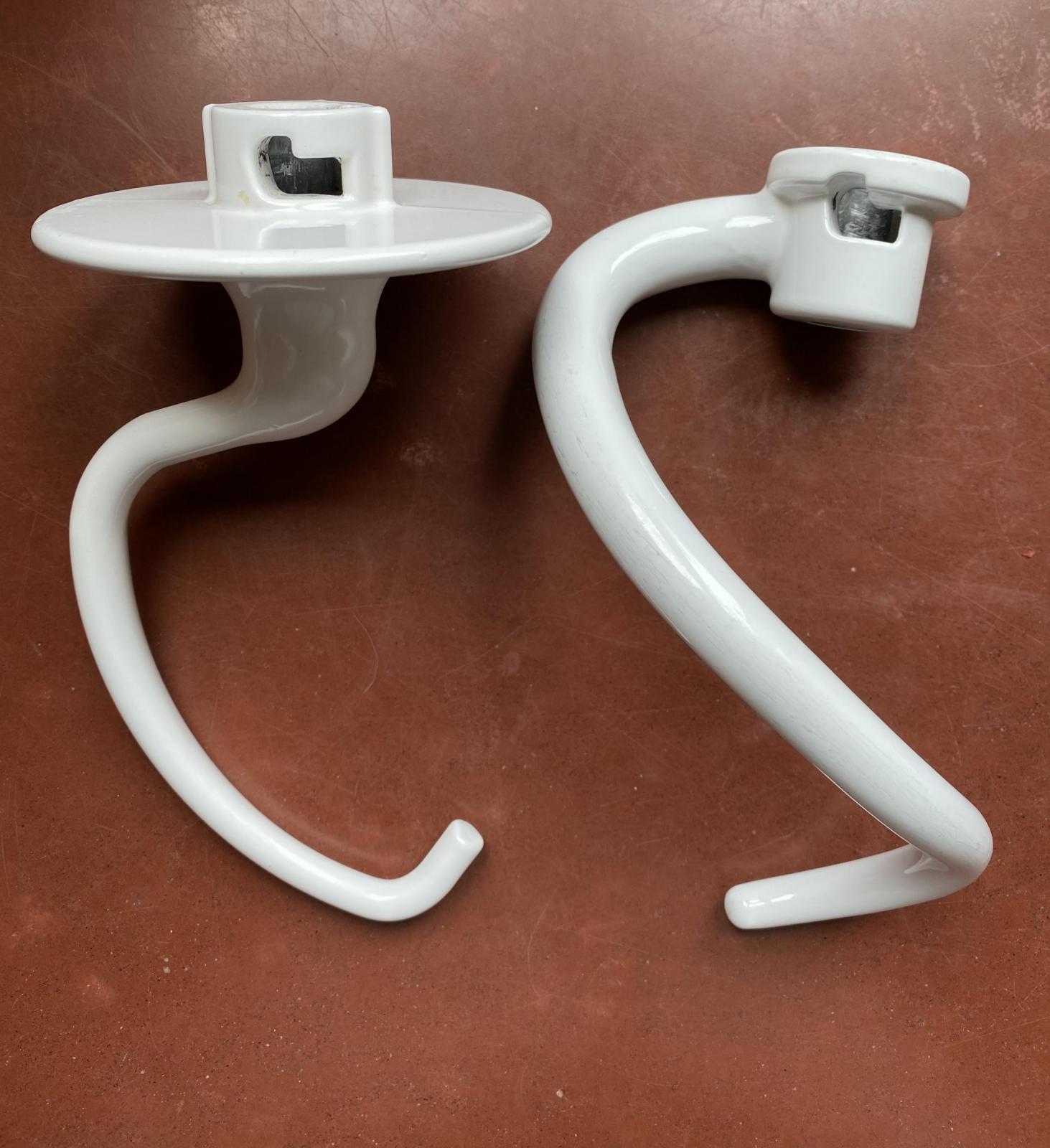 I gave up with the Kitchenaid man haha. I just use it to mix ingredients and finish it by hand. Just really weird and Im not getting whats the culprit. Appreciate your help!

By the photo, it looks like you're already a master at baking baguettes, so there's nothing in terms of technique that I can offer.

But maybe I can help with some "outside the box" thinking.

My first thought was: Is your planetary KA  mixer more or less efficient (in terms of the time it takes to develop dough) than the spiral mixer?

If the KA is less efficient, maybe you are not seeing over-mixed gluten, but under-developed gluten.

Second:  Are these mixers in the same facility?  If not, is the water different between the two facilities/locations?  "Naturally soft" versus "softened" versus "hard" water can really play tricks on a baker.

Are you taking the flour from different bags?  Could one bag of flour have more inherent moisture due to storage conditions?

If different facilities, are there two starters, one at each facility?

the out of the box thinking really helped, but I gave up on the KA on developing good gluten. I go back to hand mix for small batches ha!

And it never worked that well at incorporating additional water. It just sloshed around if too much was added at one time. I always mix baguettes by hand and even then after a bit of hand kneading the dough will come together and then it will start to “unknit” I stop when that starts to happen and give it a rest before continuing. I don’t mix to the windowpane stage. Folding and a bulk retard does most of the the job for me.
Your baguettes look great and a photo of the crumb would be appreciated for the hole story.
Don

Thank you Im not the only one. All points you have said happened to me. So Im back to handmix for small batches.

This is the closest crumb pic that I got from the last batch. I’ll post soon 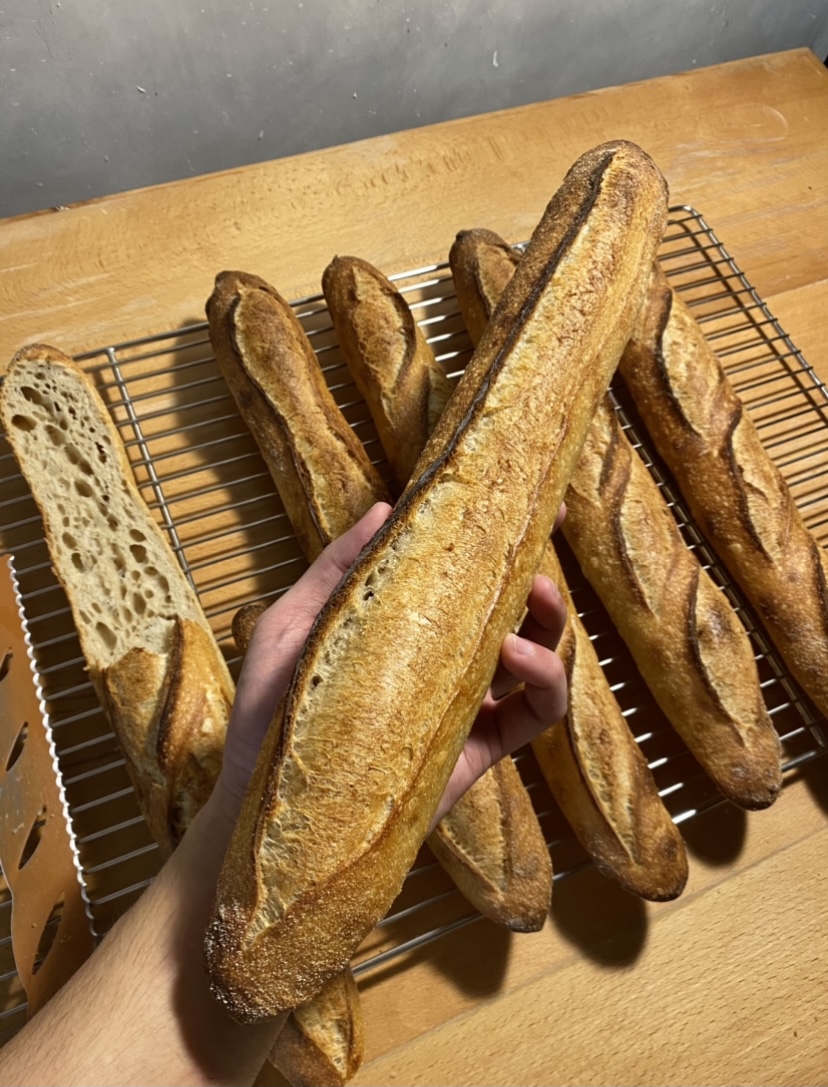 I have a Kenwood Chef Elite XL, which (at least in Australia) comes with a spiral dough 'hook' rather than the 'J' dough hook.

I have found that additional water, added after you have already formed a relatively cohesive dough, tends to slosh around and, when it does incorporate, that will take a while and won't always be all absorbed.

Spiral 'hook' or not, I think that's just the nature of the plantetary mixing action, as opposed to a 'proper' spiral mixture which, as you know, is pushing the dough through the spiral as the bowl rotates. The only place for teh water to go in that instance, is back into the dough mass.

When I do add extra liquid (in whatever form or for whatever reason,) I have found that it is best to scrunch the liquid into the dough by hand, before turning the mixer back on.

And, just to finish, did I mention those look like cracking baguettes?