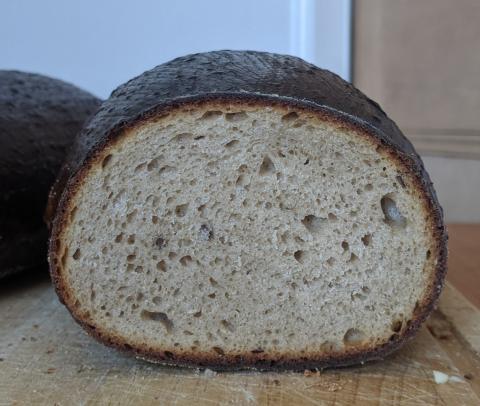 As I planned and discussed with Paul last week, finally made Riga rye bread (aka Rizhsky bread). It's a famous Russian bread (I guess historically based on Latvian recipes). It's a white rye bread with 10% wheat flour.

I followed the advice of Rus Bread to adjust the process to using CLAS. First a portion of flour is scalded with diastatic malt (I used barley malt instead of traditional white rye malt, due to availability), which produces a very sweet liquid, which is then fermented for a long time with a small amount of yeast and CLAS. Then final dough is made by adding most of the flour, salt, malt extract and more yeast for a quick rise. Here is the formula, with time and temperature: https://fgbc.dk/1qeb (note that barley malt is stronger than rye malt so scald was very liquidy, and I omitted a little water that would be added to pre-dough otherwise).

Two small defects in the final bread. Liquid dough applied before bake was probably a little too liquid, and I got small bubbles on the surface after the bake. Rus Brot confirmed that with white rye the ratio of dough to water should be 30:21 g instead of 30:25 g due to lower water binding capacity of white flour, and this is probably the reason. Lesson learned. Also one of the two breads "exploded" a little (crust got torn) on one of the sides, and that I am not sure why. I particularly like the flavour and aroma of the crust here, very full and nice. Very caramelized, as you can see, yet very soft (at least in part from the corn starch glaze I applied after the bake). 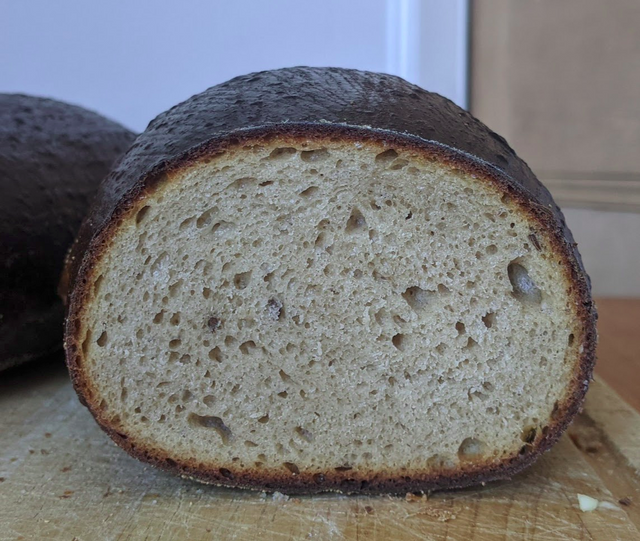 The crumb is amazingly soft for rye bread, feels almost like wheat bread! And kind of open even. The flavour of the crumb is very subtle and delicate, except when you get a caraway seed, which explodes with aroma. I expected something stronger from the crumb itself to be honest, but perhaps it is as it should be? I've only had commercial Riga rye in Moscow, and didn't like it that much due to a rather dry mouthfeel it gave (which is not at all the case here), but I thought it did have stronger flavour. It's been many years since I've had it though.

Are you a CLAS convert now?

Thank you! I've only been baking with CLAS for some time now, and enjoyed it. I still need to experiment, for example I'm struggling with getting a nice crusty loaf, like what a random person imagines when they hear "sourdough bread". And the texture of the crumb is different because of quick rise with yeast and no retard. Which is not bad, just different.

What I really like about CLAS is that for some reason the bread stay fresh much longer than what I had with regular sourdough. I don't know why though! Very curious about that.

Despite the minor issues you've baked really great looking and from your description tasting loaves Ilya.  Perfect crumb for this type of bread.

Thank you Benny! Indeed I'm particularly pleased with the crumb structure, so light you forget that it's rye.

Ilya, well done. Your search for excellence has assured you a very good loaf. I bet nobody else would detect any flaws, we are our own keenest critics at times.

I love the look of this loaf and it has a great tall profile.

I've also noticed the crumb-tenderizing effect of CLAS. This is especially true when working with high % whole-grain bread. With white rye, your loaf looks tall and even more tender. Well done!

Thank you Yippee! Have you tried baking this bread?

Not yet.  I am in a dilemma here.  If I buy it from a store, it often goes rancid because I don’t bake  frequently.  I bought a grain mill and a bunch of accessories, hoping that I could grind the flour by myself, only to find out later that it won't work.  Just like you cannot grind AP flour at home, it is also impossible to grind white rye flour.  I'm so disappointed that I want to throw away my grain mill!

Does white rye go rancid easily though? I thought it would be like white wheat flour, stable for quite a while, since there is no bran or germ...

Yippee, I would just mill your grain fine and put it through the #40 sieve and see how it turns out. Rus suggests using T997 light rye, not white rye; so a #40 pass through might be a usable equivalent.

Not much to lose!

Just to clarify, he actually says 815 is the exact match, but 997 would also work as a replacement for the same hydration, although it has a darker colour: https://brotgost.blogspot.com/p/blog-page_16.html

I have a Riga loaf on my to do list, but haven't got round to it yet. Your bake has spurred me on!

I did narrow it down to this recipe, though. There seems to be a surprising amount of diastatic malt in both recipes (50g) - I'm surprised everything doesn't turn to a mush.

Did you use standard bakers' malt flour?

The recipe looks essentially identical to Rus Brot's here, except a much longer scald incubation: https://youtu.be/TZVY4JQQtZ8 The video might give you a better indication what the dough behaves like at each stage (he also recommends a specific 3-stage starter build prior to the bake there, so it's made without adding CY, otherwise it's the same as far as I can tell).

Indeed this bread uses a lot of diastatic malt - the scald in the end is quite intensely sweet!

Normally it's made with rye malt, but I only have barley malt, and that's what I used. It's more active than rye malt, so I think my scald ended up being more liquidy than "standard", so I was just careful with the amount of water added later on, and it was all fine. Final dough felt quite stiff just when mixed, but it loosened up a lot from fermentation.

Let me know if you have any more questions, while my memory is still fresh :) And good luck!

OK Ilya, god that looks screamingly wonderful, even if mine will look like playdough handled by a monkey.  It's truly beautiful and an inspiration.  Will reflect on your work and how to go about things.

Good luck Paul, it is quiet a unique recipe with scalded white rye, not a very common method!

As long as you follow the recipe, whichever you choose, accurately, it will be great. I think rye bread is a bit easier than wheat bread to replicate, since there is no variability in flour strength and no need to develop gluten.

I'm coming to really love rye, now that I've finally come to understand in an experiential way it's nothing like wheat at all and must be treated according to its own nature.  A wonderful, flavorful, incredibly versatile grain.  Might be a converted True Believer!