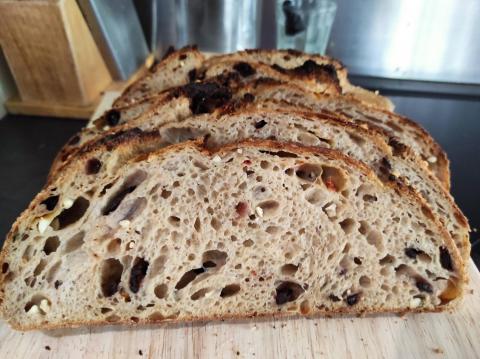 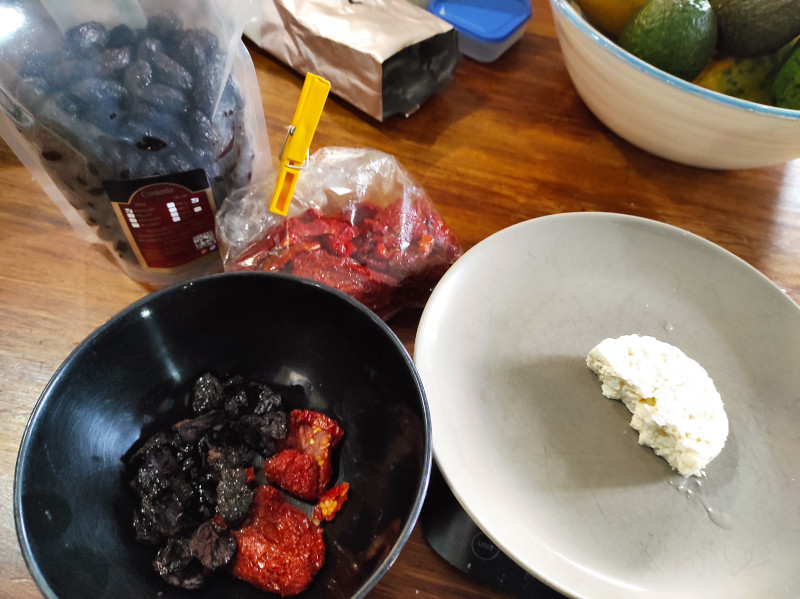 My daughter, who is 19, came down with covid and had lost her sense of smell the day before this bake. She asked if this bread had olives or cranberries in it! Think she's on the mend now, and has mentioned that she is starting to taste things again.

This is my first bread with sundried olives. They're kalamata olives and needed to be hand pitted before baking. The sundried olives brought a fairly pungent olive taste to the bread, not unpleasant but tasted like a strong olive oil, and a different flavour to the breads I've made with regular pickled olives. Although only 20g was used in the loaf the flavour tended to dominated, but 20g of sundried olives was around 19 olives, so its fairly concentrated.

The sundried tomato, like the sundried olives, were used 'dry' and weren't rehydrated before using. They were fairly unusual in that they weren't fully dried - they have a nice amount of moisture in them and we keep them in the fridge. So it felt right to use them as they were and they were great in the bread, but next time I'll double the quantity.

The feta didn't seem to do much. The quantity of feta probably also needs to be doubled, and next time I won't crumble as finely.

This bread was made using the food processor to develop the dough, which together with the home made proofing box seems to be becoming my new standard way to make bread.

The water, chilled in the fridge overnight, and levain (from the proofer) were initially mixed in the food processor to form a slurry. To this all the flours were added and were given two 10 second pulses and then left to 'fertmentolyse' for 50 minutes. Then a series of about 4 additional short pulses of the food processor, were done patting down the dough between each pulse to give, in total, another 15 seconds of whizzing. So, a grand total 35 seconds of food processor mixing.

The dough was then moved into the proofer, set to 26°C. Prior to lamination the salt was mixed into the dough by hand, around 1.5 hours after the initial levain mix. The inclusions were laminated in, followed by 2 coil folds. Shaping was done 5.25 hours after adding the levain, with the aliquot just under 50% increase in volume. The banneton was placed in the proofer for an additional 15 minutes before retarding on the bottom shelf of the fridge at 5°C for 15 hours. Banneton was removed from the fridge and popped into the freezer while the oven was warming, which is probably why I did the crazy scoring since the top surface was stiff and easy to score! Bread was baked at 240°C for 25 minutes covered, then 220°C incovered for 20 minutes.

Really enjoying this bread flour which is made from a sifted winter hard white wheat flour. This is my first local flour that has a decent protein percentage, around 14% apparently and it just sucks up the moisture, as well as giving that ridiculous oven spring that I've been envying. It also gives that mouth feel of a high gluten bread, that not unpleasant chewy gluten in your mouth which I've only ever noticed before from added VWG! The hard red wholemeal is a sprouted flour, got a bit chopped off in my formula but think it brought some flavour to the bread, kind of hard to tell with all the inclusions. 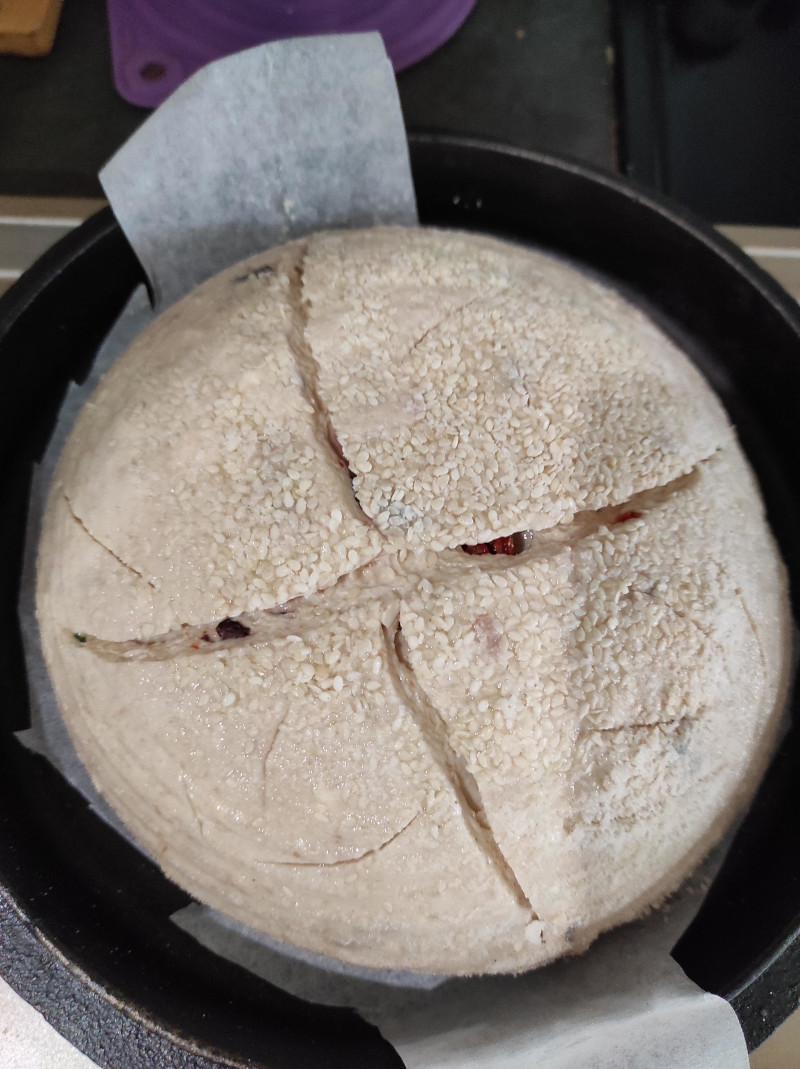 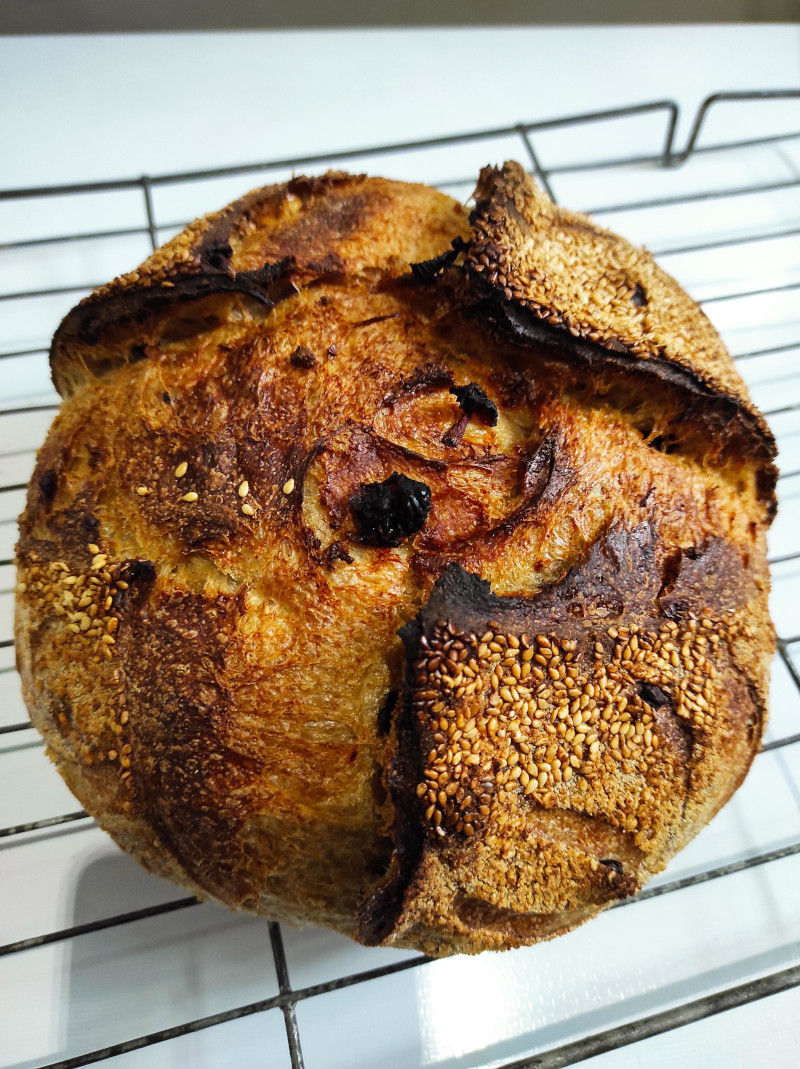 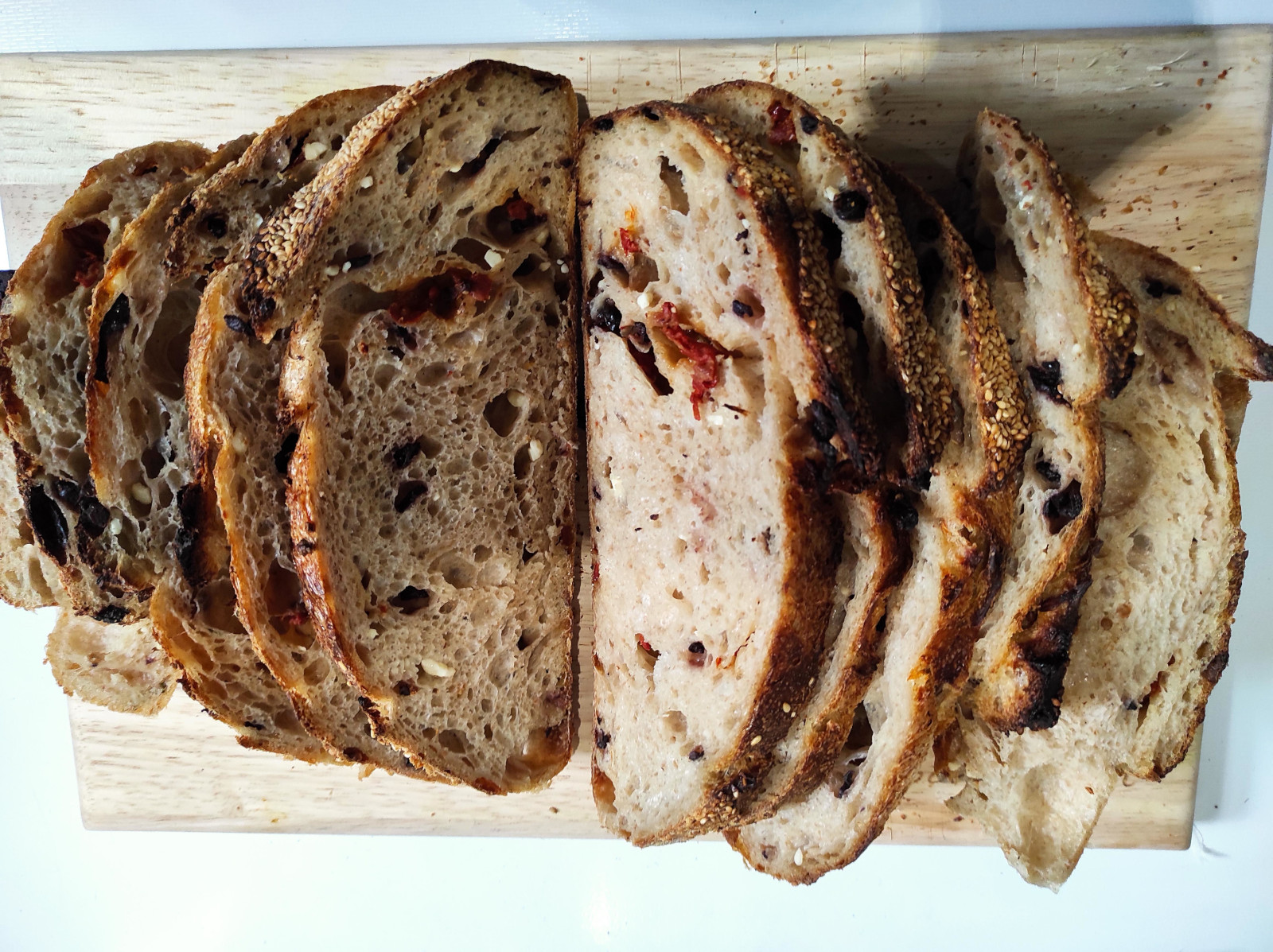 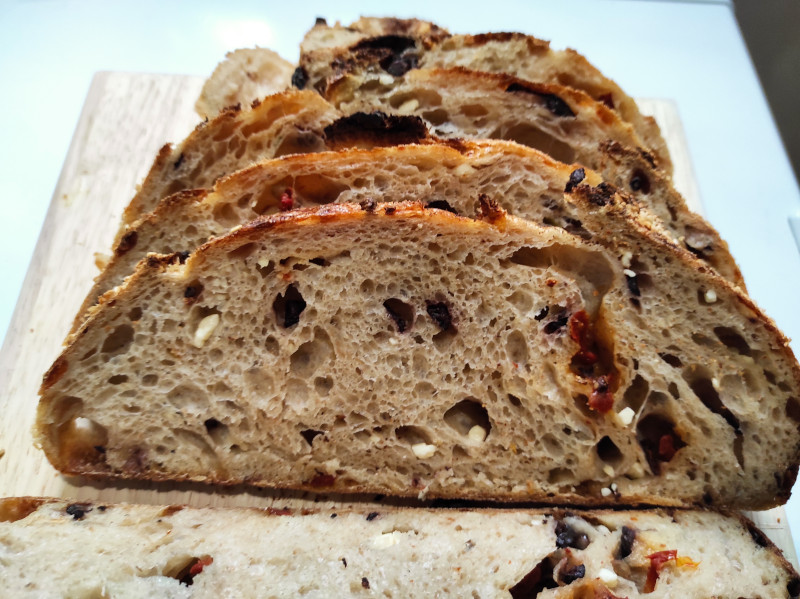 That is a beautiful delicious sounding loaf.  I love all your inclusions although I’m not sure I’ve tried sundried kalamata olives before but know I love Kalamatas.  I also like that you applied sesame seeds on the outside.  At some point I’ll have to give the food processor a go since my mixer is making clicking sounds which to me indicate the gears aren’t in the best of health.  What brand food processor do you use Jon?

For baking I recently bought a Bosch MultiTalent 8 (motor is 1250W and it has a 3.9l capacity). Works well, but it is a Bosch and from my fridge I do know the plastic that they use for the parts won't last forever. But I have been enjoying it and it is smooth and reliable and I would recommend it.

If I lived in a country that had a Cuisinart distributor I might have bought one of those, worth researching those, particularly the larger capacity models if you wish to use it for dough.

There is more wash up work on a food processor than on a stand mixer. The vinegar trick to assist with dough removal seems to help though.

Even with the Bosch if I over mix the dough seems to creep into the shaft of the mixer and all the bits need to be disassembled and individually cleaned.

I have a Kitchenaid Food Processor which I used to use to make pie pastry but now do that by hand so it only gets used to make pesto.  You’re making me think of the clean up of the machine now so I might stick to doing hundreds of slap and folds instead LOL.  Again, love your bread, the flavours are right up my alley.

For me, hundreds of slap and folds mean I have dough splatters all over my counter and even find them in my hair later in the day! Funny to think of it as a cleaner way of working.

Yes believe it or not I don’t find doing slap and folds all that messy.  I guess it depends on whether or not the dough is overhydrated, in those instances yes it is very messy.

less olive and more dried tomatoes.  Got it.  Have a jar of tiny dried tomatoes just waiting for their moment of glory.  How did the chives work out in the dough?  Any more herbs you'd recommend?

From the comment about the feta, I think I'll work up a spread for the sliced bread.  Topped with snipped chives and chopped celery stalks.

I added far too little of the chives and maybe it is worth trying with scallions instead.

Am thinking that I want to experiment with maybe a cup of chopped scallions with oil in a future bread but also not sure how to handle the extra moisture.

Maybe sauté the scallions before adding them to the dough to reduce the moisture Jon.

Just cut up and spread out on a little piece of parchment to dry overnight.  Then dump them in. You could roast them too. They do have to first loose water to caramelize.  You can also jump start the evaporation nuking them first and then roasting them.