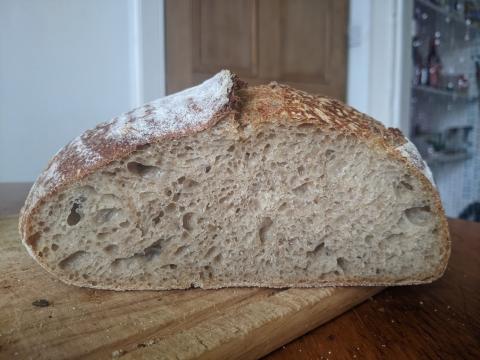 The dough felt just a little overhydrated, which surprised me, normally the bread flour I have can take up to 80% hydration, although the whole wheat flour I used is much more sensitive to water content. I wonder if the recent rainy weather here increased the humidity... Anyway, fermented it at 25°C, and after three sets of folds within the first 2 hours it had good strength, and was already quite active. I left it for 1 more hour where it increased in size a lot and had a lot gas trapped inside. I shaped it very gently, and probably too gently - I should have made the structure a little more robust, since after proofing the dough flattened out a bit more than I would have liked when turned out on the peel. Oven spring would have saved that though - if a little spot on the loaf didn't get stuck to the peel and got folded under the rest of the loaf! As we say in Russian, "never happened before, but here we go again". Anyway, it still rose nicely in the oven and the bread looks not too shabby. Would have been great if not for this stupid mistake. 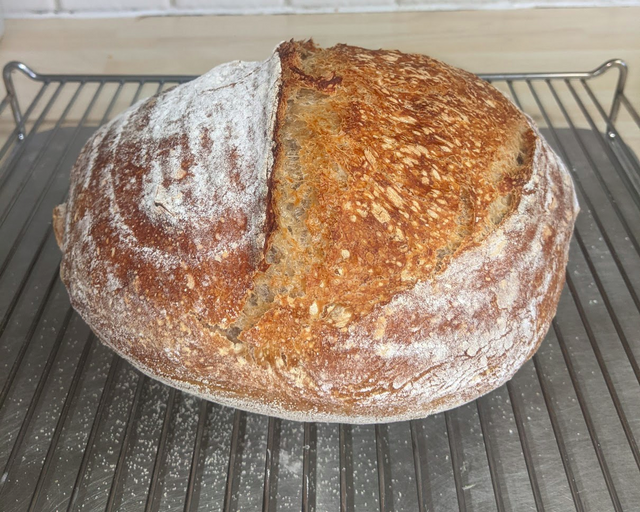 The crumb is fantastic, relatively open, yet mostly even. Getting close to the "lacy" territory, not quite there yet. However, there are clear differences from what I would expect from a similar bread using regular sourdough (which might be explained by too much hydration?..). The crust is thinner, and almost completely lost the crispness more quickly. And I don't really detect any sourness in the taste. The crumb is also softer than I am used to. So I wonder if I would prefer higher % of CLAS in this style of bread, perhaps 8% PFF like recommended for whole grain wheat? Or maybe my young CLAS needed a refreshment (which I did this night after baking). Or should I just reduce the yeast and give LABs more time? What I think too though is that the smell is nicely more "bready"!

And now I wish I had a pH meter to compare acidity objectively from the two different methods... 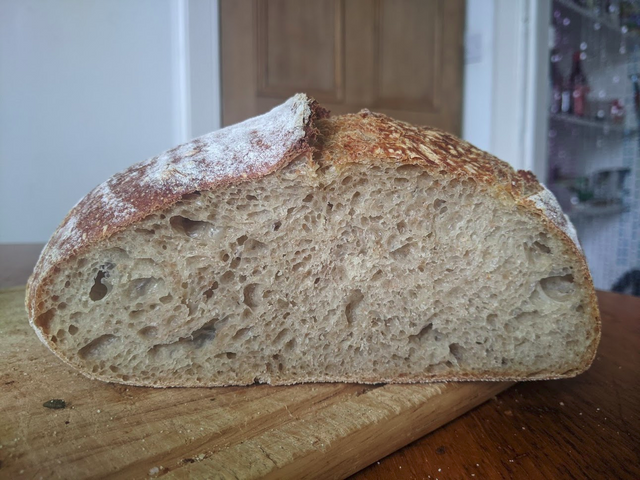 Just checked on my refreshed CLAS and it exploded during the night spilling out of the container! The temperature was right as far as I can tell (I didn't get up and check during the night, but it started right, and was right now - and smells right too), so must be bacterial CO2 production. Need to find a bigger container... I wonder what this change in behavior means, if anything.

Nicely done Ilya, I would certainly be interested in some pH data, too bad you don't have a meter to check it out.  It does looks like a great bake and I agree very nice crumb.

Thanks Benny! yeah, I'd be curious if the actual acidity is lower than I got with regular sourdough, or it's just a perceived flavour difference. The actual CLAS starter is certainly very sour, just by taste.

Could you tell us a little bit about the flavour the CLAS brings, because it would be tempting in this case to just leave the CLAS out and bake this like an instant yeast bread.

Feels like this is mirroring my bake today - also got a crust that softens as the loaf cools. It is certainly my bread flour in my case, which has high gluten but doesn't develop a crust like my old bread flours used to. Which means the next loaf I make with it will have more interesting and extra wholewheat additions to try and compensate for that.

Thank you Jon! I'm glad I'm not the only one enjoying my games with CLAS.

I wish I could tell you that. It's really hard without a direct side by side comparison. From what I can feel so far, it seems that it just adds some depth and stronger breadiness to the aroma. Many people comment on Rus Brot's videos and articles that CLAS gives better flavour than regular sourdough. I can't say I am quite convinced about that yet, it's certainly not obvious. I've never baked bread with just yeast, so have absolutely no idea how it would compare (and comparing to commercial bread is not a very valid comparison I guess). Perhaps I should experiment more, with increasing amount of CLAS or decreasing yeast... Or different temperatures. Rus Brot ferments most doughs at at least 28°C (apparently that's the Russian tradition, to ferment very warm), perhaps CLAS is more suited to that? Here I tried 25°C.

Thanks for taking the time to post on your experiences and learnings with CLAS!

It looks like you’re having early success.  That loaf and crumb is optimum for my taste and is exactly what I’m hoping to make with each bake.

Thank you Troy, glad you enjoy following my experiments! The crumb is indeed one of the best I've ever achieved IMO.

this is super nice! And the crumb is amazing! I mean, how open does it have to be to qualify as "lacy"?

Thank you! I don't know, I have this image in my head of some bread crumb I saw somewhere that just set the high standard for lacy crumb, but I can't find what it was now. How I understand it, it's not about being very open, but a particular crumb structure, with similar sized elongated holes and very thin walls. This is indeed probably the closest I've ever got to that ideal in my head :)

This is a good example, although not what I had in my mind: https://www.youtube.com/watch?v=mJeuS9Bedig

Have you tried that with CLAS? That would give you some more oven spring.

Haven't tried with CLAS yet, the fridge is too full! Generally I retard when possible, I like the stiffer cold dough for scoring and transferring to the oven.

I propose the following workflow to make a sour loaf mostly based on your ingredients:

Bulk, proof, and bake at the time and temperature that you see fit.

If you try it, please report back if it works.  If not, please ask Rus.

I don’t think CLAS is supposed to be retarded.  Please check with Rus as well.

Hi Yippee, thanks a lot! I'm not looking for a really sour taste, but just a little undertone, like if you eat a bite of bread with nothing on top and chew on it for a few seconds, you notice a little acidity. And it's not something you really notice if there are any toppings on it. This is what I typically had with the regular starter, and quite liked, and was surprised I didn't get it with CLAS. Of course it produced acid in my first bake with whole rye, since the crumb was excellent. But in the later bakes I haven't really noticed it.

Wow you would ferment pre-dough with only CLAS and no yeast for so long? Is that to get super sour bread? :D Or do you think the salt would slow it down a lot? Just curious how you came up with this formula and process.

Yeah I was wondering about retarding - I think I've only seen one recipe from Rus with fridge ferment - for Ciabatta (I haven't watched all of the videos yet). I meant to ask him about that actually. Why he chose to do it there for 24 hours, and not in any other recipes that I have seen, not even baguettes... I have a feeling his taste is really not sour bread. And retarding is also not in the Russian tradition AFAIU, so he doesn't do it generally.

It is.  I learned how to use it from making Rus's German rye.  My only concern about the proposed recipe is at the dough stage.  I don’t know if the amount of pre-dough is too acidic for a dough consisting mainly of bread flour.  This is just an idea for your consideration.  It may need to be fine-tuned to make it work properly.

Aha I see, thank you! He uses a regular starter, not CLAS for Monheim sourdough... But I don't see why it wouldn't work in a yeast-less starter! Interesting idea! I'll think about it, thanks again Yippee :)

Re your PS: do you mean the "Inoculation" in foodgeek's calculator? It's just the alternative way to express amount of starter in baker's % (i.e. % of starter weight of all of recipe's flour), instead of % PFF. It's might be easier to use in practice, although requires additional specification of hydration of the starter to reproduce the recipe.