Finally decided to take the plunge and make a 100% whole wheat bread. I used the Balcaskie landrace flour from Scotland the Bread. Here is the formula I used, with 81% hydration and a little honey: https://fgbc.dk/1nmi

I thought 81% hydration was low for purely whole grain dough, and was ready to add more water, but it turned out if anything, it was too much! The dough at first felt almost like rye, or like porridge - no structure at all. With a bit of time and a few gentle folds it got a little strength, but it was barely enough to even shape as a pan loaf. When in the pan, I let it almost double, at which point placed in the fridge since I had to go out for some time. I was actually worried I had overproofed it, since with such weak dough doubling might be a bit ambitious, and the dough had a few pinholes on top - like rye does when it's ready to bake. After a couple hours in the fridge I preheated the oven and baked with steam. 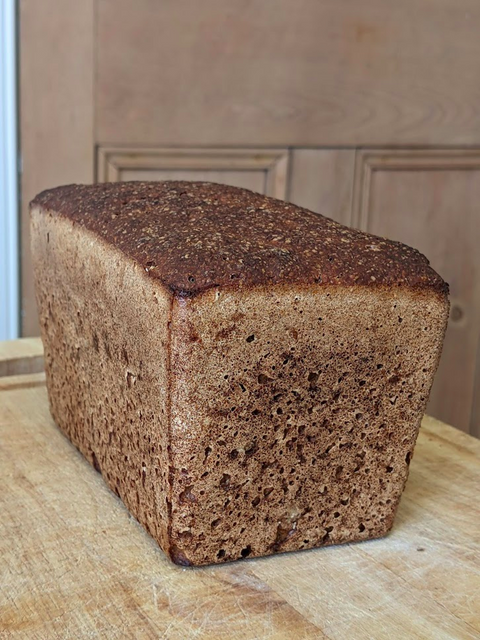 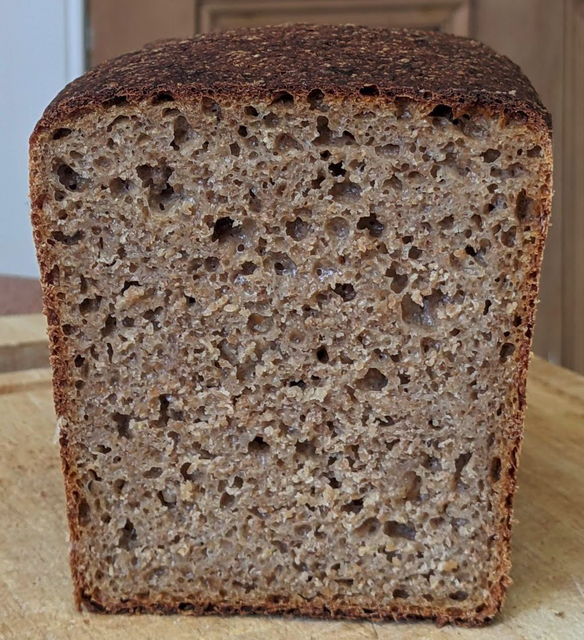 Essentially had no oven spring, just enough to smooth out the top. The result was surprisingly good! Very tasty, and a nice crumb structure. No bitterness like one can get with whole wheat dough. The only thing is deeper into the loaf it has a bit of a tunnel on top, I am not sure what could have caused that: 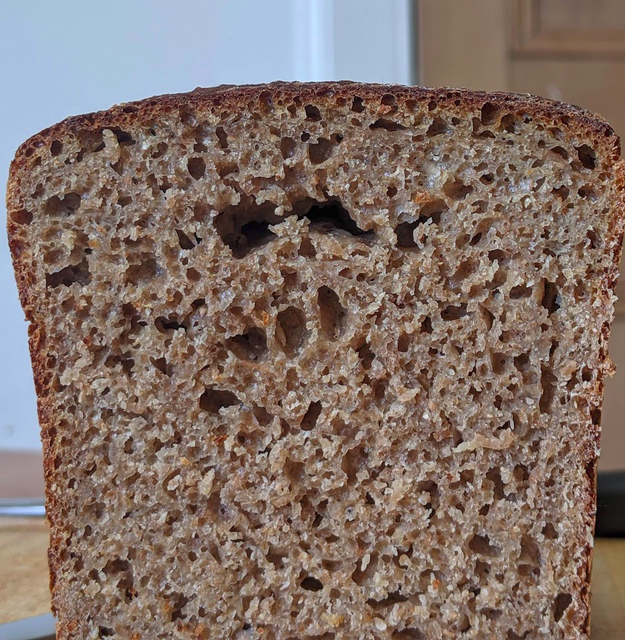 Regardless, the flavour is really nice and I am happy with my first 100% whole wheat bread :)

My bakes are primarily whole grain. The dough is sometimes strong enough to shape into a batard, more often it is definitely not. I quit fighting with it and now primarily bake pan loaves. I sometimes get that same bubble vs tunnel, and haven't been able to figure out if it's a proofing issue or an artifact from shaping. Maybe Benny has some insight, from his red fife experiences.

Thanks Mary! I was pleasantly surprised by the bread too, and particular the crumb indeed. Difficult to work with such dough, but the result is great.

It was too sticky to roll into a log, so I "shaped" it by doing a few gentle French folds, to get a somewhat smooth surface on top. I think that could have trapped some air, could be that. Let's see if someone else has some other ideas. This tunnel was quite small and not really a problem anyway. I'm worried it could be the first sign of overferproofing, that would be good to know for the future.

Great looking bake Ilya.  The crumb looks great to me and I bet it has great flavour too.  Normally I would think that it might be a bit underproofed but it obviously is not.  It also is not looking overfermented to me either.  I agree, it is probably just trapped gas when doing folds or shaping.

Thanks Benny! I am sure it couldn't take any more fermentation, I was worried it would deflate... Very weak dough, and it doubled. So probably just some trapped air indeed.