Cannot get open crumb for the life of me.  I'm not too obsessed with it - my main thing is depth of flavor and chew - but it would be nice to be able to do it.  My dough handling, I think, is the culprit.  I kill the loaves during scaling, pre-shaping, and shaping.

Those with trained eyes, I know, will know the flaws. 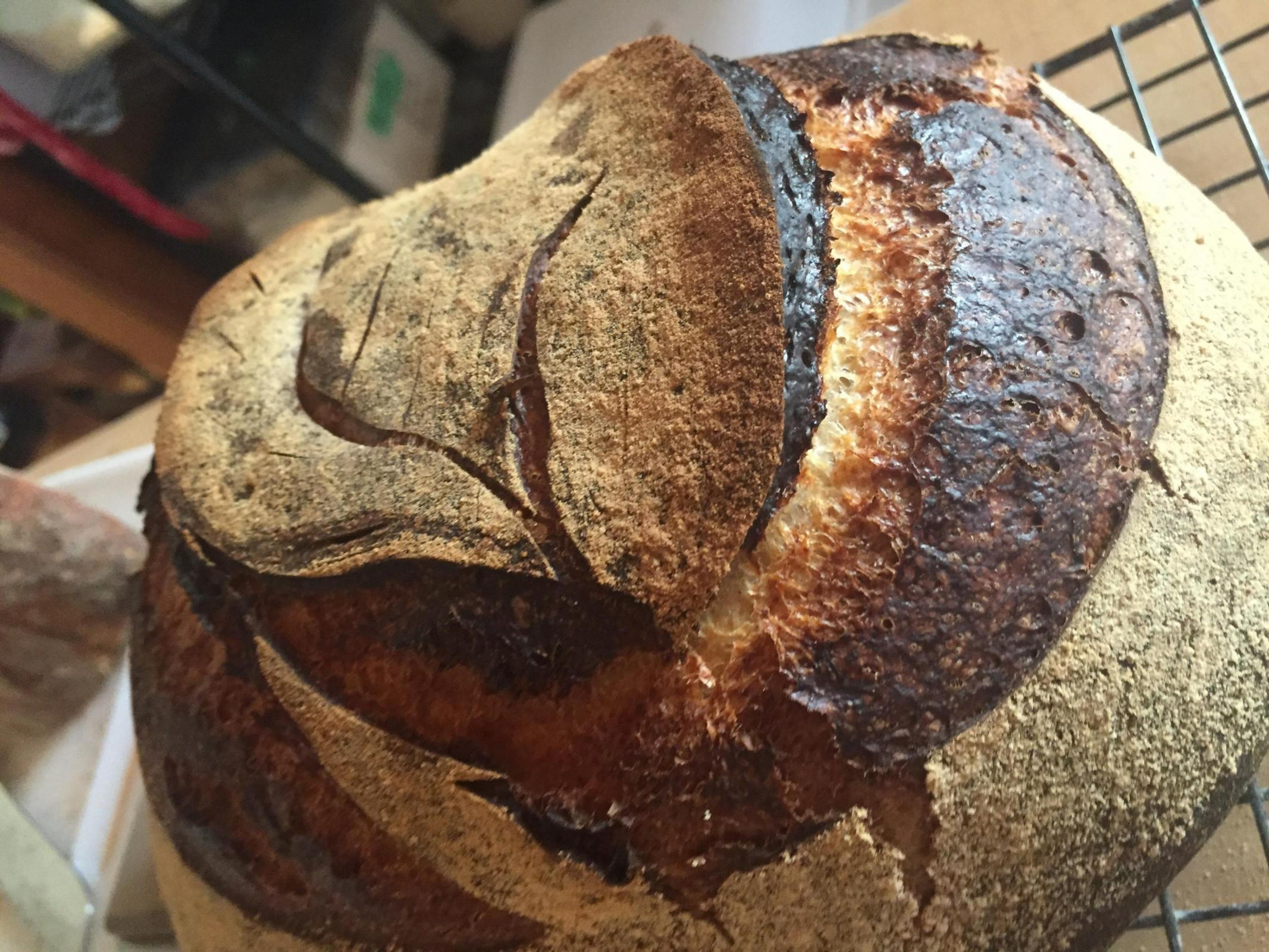 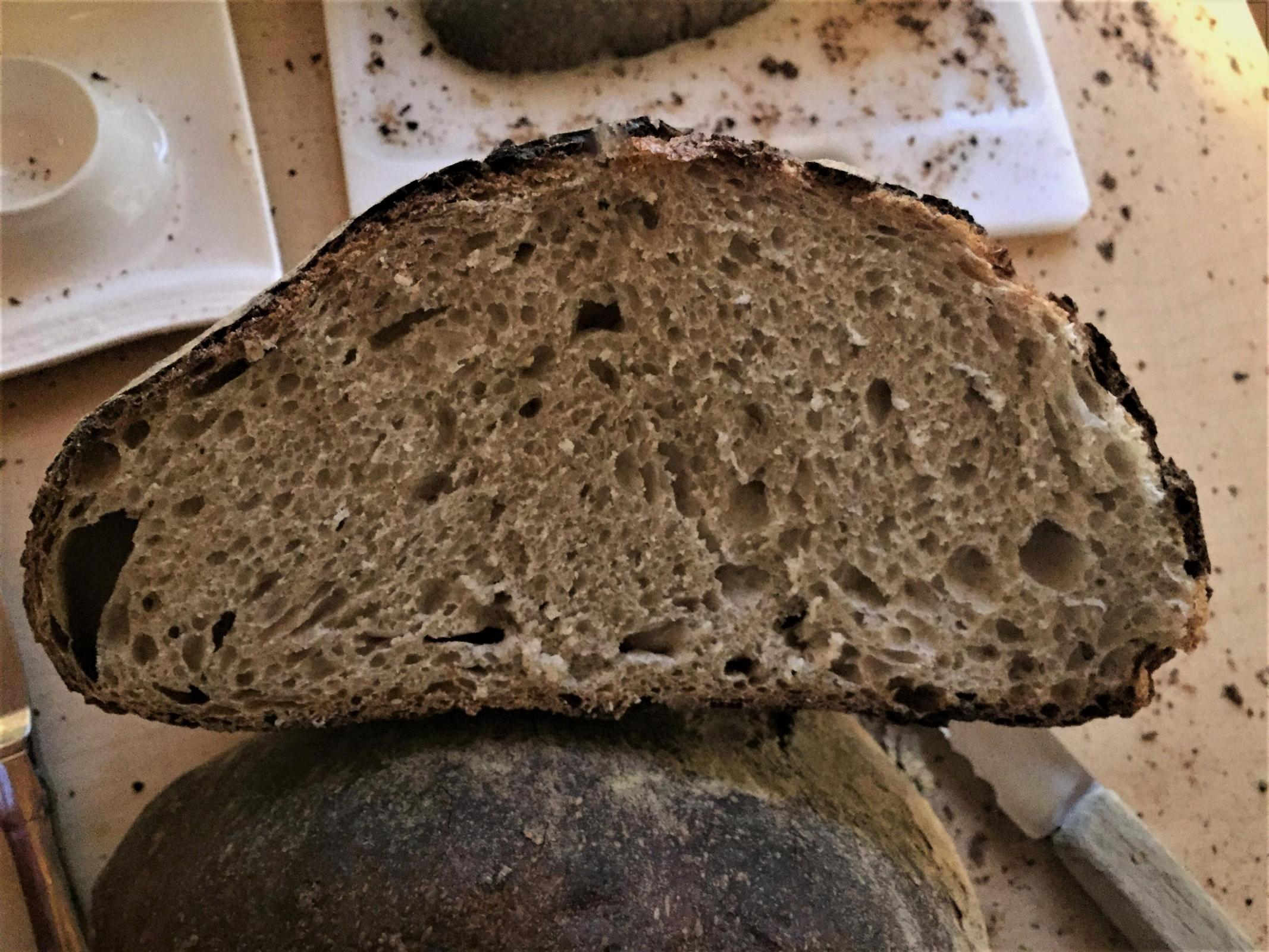 It's a beautiful loaf and excellent crumb, Paul.

This is Hamelman's crumb of his Vermont sourdough from his bakery: 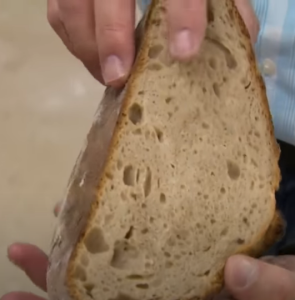 Shown in a video about his bakery

Yours is very open and lightweight, compared to some and not as open compared to others. But Hamelman himself is not a huge fan of super high hydrations and holey crumb. Bread is for eating not for using it as a fishing net. Yours is a perfect beauty both aesthetically and in terms of flavor, I am sure.

I'm deeply humbled, mariana.  This means a great deal to me, coming from you of all I've come to know here.

Thank you, so very much.

Interestingly, Vermont sourdough in Hamelman's Bread editions 1 and 2 has hydration at 65%, in edition 3, the hydration is 70%. I've baked the Ed. 3 version twice now and find that the crumb is too chewy for me and not as nice taste. I've gone back to 65% hydration and am very happy with it again. I agree with Mariana, I don't like a very open crumb.

I think your loaf and crumb look very nice.

Paul your loaf looks great to me as well.  Ultimately flavour is most important and that your bread is functional for what you intend to eat it with, so tighter crumb for spreads for example.

Coincidentally, I have been doing the Vermont Sourdough lately too, but using the revised formula in Hamelman's new third edition. I am experimenting with 100% hydration starters, so have adapted his formula (which is based on starter and levain both at 125% hydration) and calculated a "working formula" for myself. The overall formula is now 70% hydration, reflecting Jeffrey's changes, but the prefermented flour is still 15%.

For what it's worth, I have had the real thing at King Arthur in Vermont, and have used the formula in classes there as well. When well-made, it is light and very good --- definitely more open than the bread in the video clip that Mariana posted (thank you for that, Mariana). But the one Jeffrey is pulling out of the oven and cutting into there isn't Vermont Sourdough. What that shows is him working and test baking with a new flour. Formula and/or process development in progress.

Unfortunately, I don't think he cuts it open in this video, but he walks through the Vermont Sourdough formula and process:

Thanks for such kind words and support everyone.  You are all such extraordinary bakers and your comments mean a good deal to me.  I feel I'm on a good path again, and it's because of you all here, and plenty others in this extraordinary place.

Debra, yep, I'm going straight from the second edition (interesting that on the 3rd he went up to 70%, Gavin and all - anyone know why the change?), so the levain is 125%.

I will say however my starter is 100%, not 125% (though I began and maintained it so for a long time).  I cannot claim total fidelity to Jeffrey's formula because I've played with the starter refreshment ratio - anywhere from 1:1:1 through to various ratios up to 1:5:5, depending on my timing needs.  I know this isn't optimal because monkeying with the ratios changes things, and it's funny because I'm so dedicated to the Rubaud chef being meticulously followed according to his formula and process, but I no longer really sweat it with either my white or rye liquid levains.  (Though in all seriousness, even having read new material provided by member alfanso last night, I think changes are coming everywhere based on what I'm slowly coming to understand).

Thanks for the link, Debra.  Looking forward to watching it.  And I'm really thrilled to meet you, having read so much by and about you on the site.  For what it's worth, usually my bread flour is Central MIllings's Baker's Craft Plus, but due to shipping costs being so high currently I'm just getting bags of KA AP as needed from the store.  My WW, similarly, was Hi-Pro medium from Central but is now KA WW.

On a side note - just came across several threads on flour, with heavy contributions by you, mariana.  Makes me want to sit down and really carefully work things through - read and learn more deeply here and in Calvel, et al, while putting a lot of focused time on deciding on the qualities I'm looking for in my breads and consequently my flour(s).

How to say it simply?  I have no desire to anything other than making good, true, French bread; with a sophisticated enough palate to know what that means and technical ability to carry out where my palate leads.  Honest, simple, authentic French bread in a "traditional" vein - though I know words like "authentically" and "traditionally" French are fraught with all kinds of problems.

Clear as mud, sorry.  I know I write in search of a point and that's tough to get through.  What I mean to say is I'm wondering if even my base flour is wrong, if this traditional French bread is truly what I'm after.  I was stricken to see Gold Medal mentioned more than once, and this Ceresota, for instance....I need to read Calvel and the many threads here dealing with French and American flour comparisons, because I'm baking blind right now.  Something as simple as choosing winter hard wheat over spring hard wheat.  So much more, I've got dozens upon dozens of threads to soak up, it's all here.

I'll leave it there. Just throwing out the very humble aim: to improve my ability to make consistently good, traditional French breads.  To come up with what that means, and to work backwards from that goal through ingredients and methods to some level of mastery.  I'm grateful to have you folk as guides along the way.

To disguise any real or perceived flaws, simply cover them with a slice of good ham and Swiss cheese!

You are dangerous, my friend. :)

My in-laws are also coming to town Saturday, so I'm busy making more of these Hamelman SD's and the Rubaud-style pain au levains.

Cautiously optimistic that I'm getting a bit of feeling for things again, thanks to mariana and everyone.  The Rubaud is coming along well, I think - finally realized I have to get strength somehow, nothing can make up for poor development so spending considerable time up front (with the Rubaud, it's 150 FF's, rest 25-30 minutes, mix-in levain and salt, FF's until strengthening up and needing relaxation, rest, repeat as needed.  Last one, total of 600 FF's going into bulk.  Big difference).

I appreciate the help. 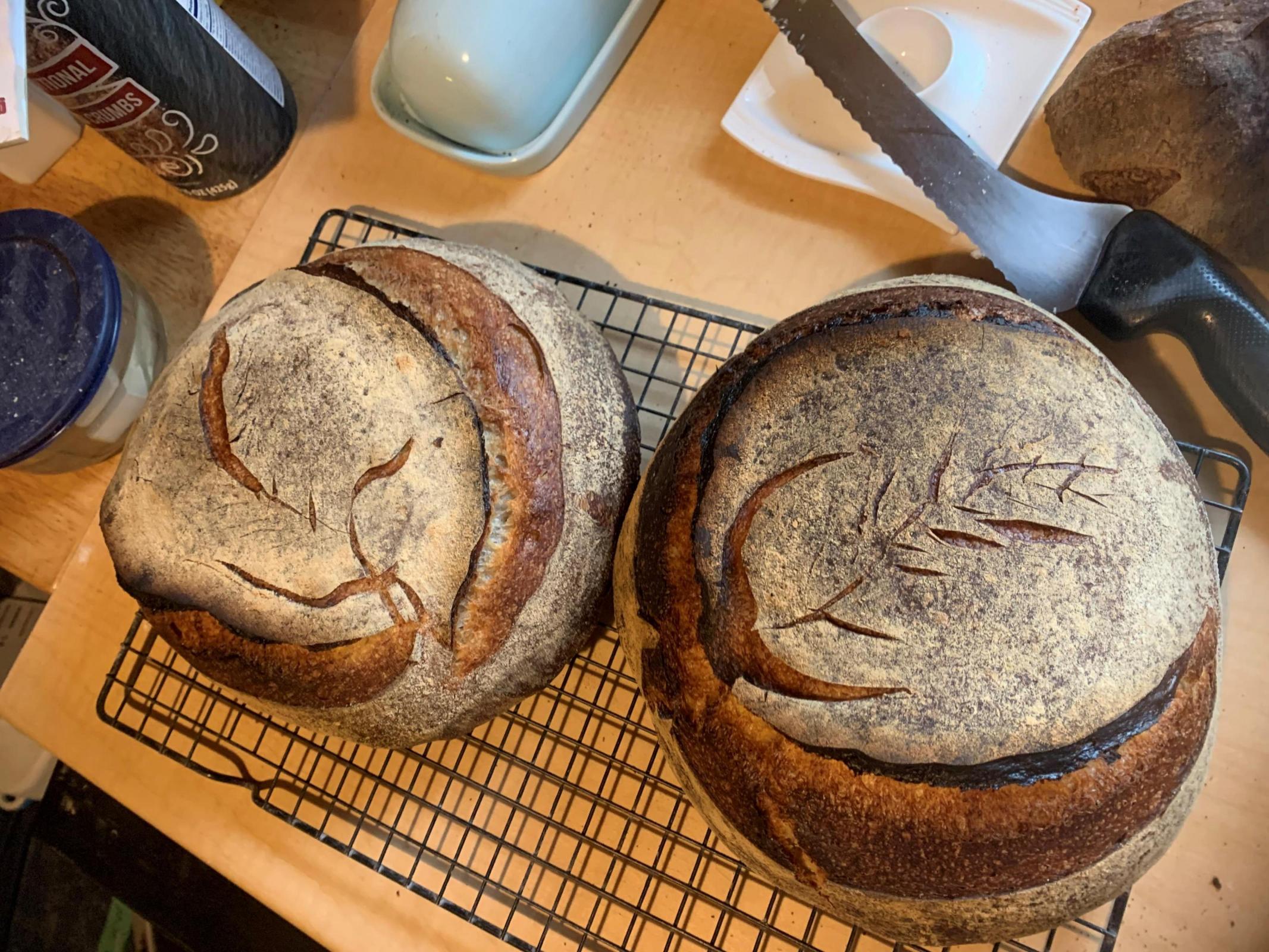