This differs from my previous attempt in that it uses:

The home grown desem effort was motivated by Mariana's comments.

The lower PFF was motivated by Debra's comments on inverse relationships between PFF and hydration levels as well as the lower PFF used by Jennifer Lapidus for her desem section in her book Southern Ground (former apprentice of Alan Scott), and mdw's success at low hydration with his converted starter (and most TFL bakers in general with whole grain sourdough baking (idaveindy, etc)).

I had assumed a high PFF and a hot final proof were requirements of desem baking, but above discussions make me think it is mostly the starter itself, as there is quite a lot of variation in the approached presented in LKBB, The Bread Builders, Bread, and Southern Ground (the latter using the popular cold final proof at higher hydration).

I ground Red Fife berries (from breadtopia) 1 click back from ticking in a single stage and used a fairly short 1.5-2 hour soaker.  I used a warmish room temperature BF to roughly 60% for the first one and a slightly lower 50% in the second one after getting a flatter loaf than I like in the first attempt.  The final proof ran overnight in the fridge with a measured final temperature of close to 40F.  I baked covered for 35 minutes (Challenger pan) and uncovered for 5 minutes.  I left the oven dial at 400F (which gives me a temperature somewhere between 450F and 475F). 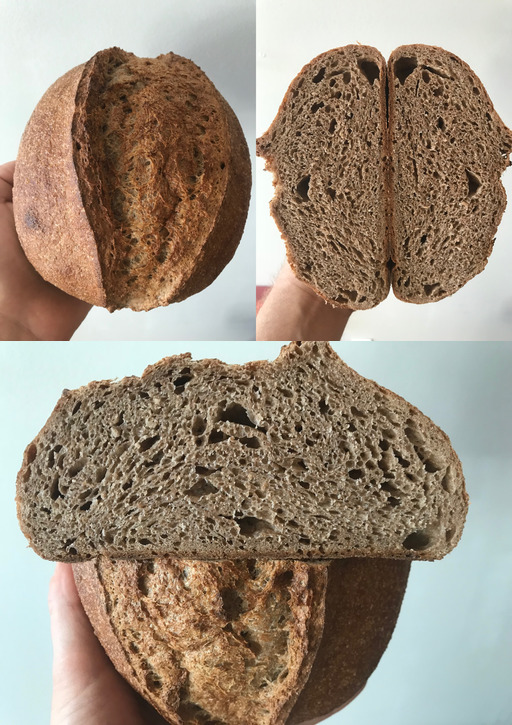 I'm quite happy with the result using the new starter and this approach.  Unfortunately, with hot temperatures arriving in NYC, I'm doing much less baking in the apartment now.

David that second loaf is near perfection for a 100% whole red fife sourdough, amazing work.  So you reduced your PFF to 10%, how much was it before?  My levains usually are calculated to be about 9%.  The comments about using less levain are interesting to me though, having less “spent” flour makes sense.  It seems that 80% or over is just a bit high for red fife, based on my final bake 75% is definitely too low, you seem to have found the sweet spot at 79% for your freshly milled flour.  I have to applaud your effort, awesome.

Thanks Benny.  That's a nice complement from a perfectionist baker.  This may be my first real successful bake for my home milled whole grain desem journey.  It certainly took a lot of attempts.  I changed a few things here (in addition to the above bullet list I also used a more conservative single stage milling approach, more passive gluten development, and a single step hydration (no bassinage)).  I'm curious how much of the crumb improvement is due to the home grown desem starter itself (I threw the previous one out, so I'll never know).

Most of the desem recipes I have seen use a very high % PFF -- close to 30% or so.  This probably has a lot to do with the formula in Laurel's Kitchen Bread Book.  As Debra mentioned in the above link, that may be more appropriate for slightly stiffer traditionally kneaded doughs (perhaps more en vogue at the time of publication).  My understanding was that the high % PFF was needed to complete fermentation quickly to avoid excess sourness commonly associated with naturally leavened whole grain bakes.  I had initially started at 30% but eventually lowered that to 20%.  I think I had somewhat of a mental threshold in place, as I wasn't sure if reducing it further, to 10% or so, was still in the spirit of the approach.  I had been using a converted faux-desem starter (a starter "trained" at lower hydration and cooler temperatures), based on the sourdo.com South African starter I purchased last year when I started baking, and never gave much more thought to it.  I think I was aware that mature starters behaved differently, but assumed they were, for all practical purposes, more or less similar once mature.  (I would love to see and taste a number of different breads baked with the same ingredient and formula but with different starters.)  For all the discussion about tuning hydration, fermentation, PFF, and other variables, I never really see much discussion about changing the starter itself -- aside from maintenance routines and levain treatment.  For example, I'm baking bread X tomorrow, I better prepare starter Y.  Mariana reminded me that that particular culture is known for a sour flavor, so, in hindsight it was probably not a good choice for a faux-desem, and I may have been battling its inherent tendencies, and developed somewhat of an aversion to extended fermentation whole grain baking as a consequence.

I really like the flavor of these, although I like the flavor of the english muffin I made in my lodge pan from the aliquot sample the next day even more.  That was sitting in the fridge door for another day or so before I "baked" it on the stove top.  It had a deeper, maltier flavor, and surprisingly didn't have much sourness.  I'd like to achieve that in the bread.  I measured the pH of those loaves after posting at close to 4.4, and have seen 4.2 mentioned as a target for desem in The Bread Builders.  I am curious if I can achieve the same level of fermentation as the aliquot sample without sacrificing oven spring too much.  Perhaps reducing % PFF even further will help.

Thanks for your detailed baking notes.  They have been very helpful and provided more evidence that higher hydration was required.  My previous attempts to bump hydration above low 70's (for most whole grain flours) would result in lackluster oven spring and sealed ears.  Perhaps the starter and/or % PFF were getting in the way?  At some point I may try a 20% PFF bake with the new starter for comparison.

David, I have wanted to repeat my 100% whole red fife and will do so in the near future once I have more pH use under my belt.  I’m really not certain at what pH to aim for at time of baking.  From Lazlo on IG who has been using pH for some time he recently told me that he is now aiming for pH of 3.8 at bake time and that he finds for his 750 g dough that the pH drops 0.2-0.3 while it cools in the fridge.  For the dough that are stronger like the semolina one I just baked, I think that aiming for pH of 4 at the time of cold retard should work just fine.  As I start to look at pH and use weaker blends of flours I may have to cold retard at a higher pH than 4 especially since I usually do 900 g dough so starting cold retard at 4 may go below 3.8 at the time of bake and may weaken the gluten too much.  For the red fife I think I’ll follow my aliquot jar for rise aiming for around what I did last time (I’ll need to check my notes) and see what pH that corresponds to.  But I definitely want to see if I can open up the crumb as you did here, which I find is superb, the fermentation looks spot on.