Combined the Swiss Farmhouse recipe with ideas from https://www.baked-theblog.com/cinnamon-raisin-sourdough-bread/ and some of my own inspiration, to get to this formula with about 40% whole grain, including mostly wheat and also a little rye and barley (beremeal), with 75% hydration: https://fgbc.dk/1n44

Mixed everything except inclusions , left for a few minutes, and then kneaded until somewhat smoothed out. Left for about 45 min, and then "laminated" and included raisins (pre-soaked, and I used the soaking liquid as part of the water in the recipe) and walnuts. Then left to bulk at 28-30C in a straight sided container. Then I had a long work meeting, and by the end of it the dough at least doubled in volume, maybe even a little more! Don't believe when people say cinnamon slows fermentation. Anyway, I preshaped, and then shaped it, and retarded overnight, then baked in the morning. I got barely any oven spring, but with the amount of inclusions and appreciable amount of whole grain it might be not surprising. 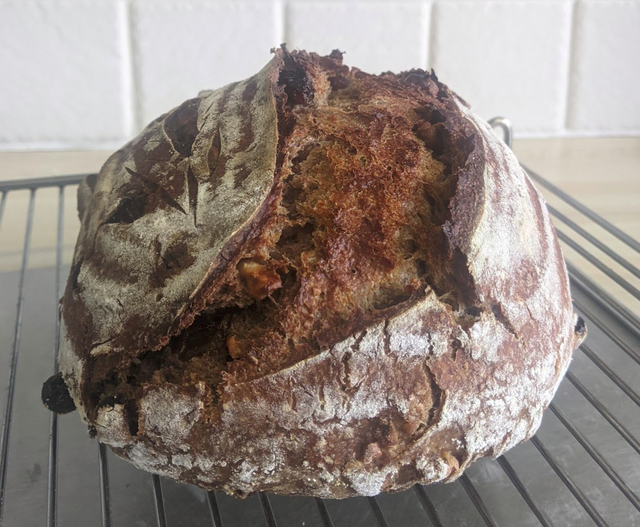 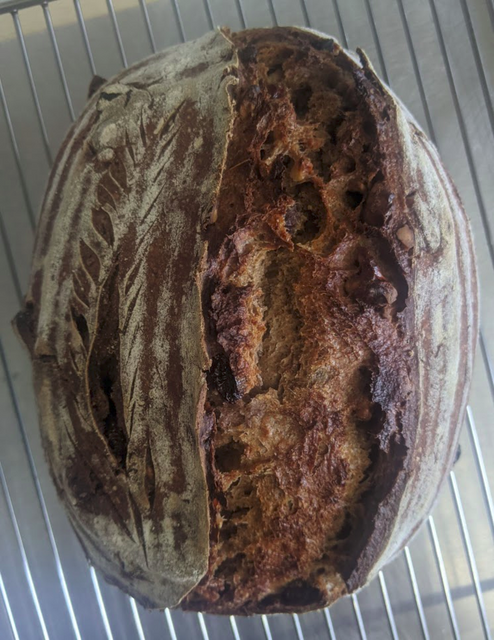 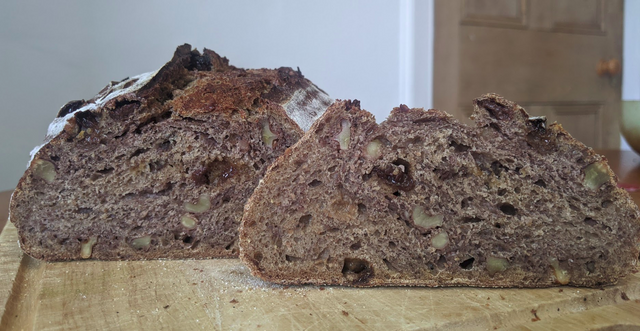 The bread is really tasty. Nice sweetness from raisins complemented by cinnamon and walnuts, and very good flavour form whole grains. The crumb is moist and surprisingly soft. Great with butter, or with some sharp cheese. Very pleased with the result, just what I wanted.

but without nuts. I'm still debating whether to bake it in a tin or free form. Yours looks very good! I 💕 sweet bread!

Nice! I really enjoy this kind of bread too. Walnuts complement raisins very nicely, have you tried adding them? It's a classic match.

I am now thinking maybe it work better in a tin - fewer burnt raisins that poke out... Hard to avoid. But maybe they would burn from the contacts with the tin anyway? Or would stick a lot? Curious what you decide.

Especially if the dough does not rise above the rim. The ones touching the sides of the tin are not burnt if the baking temperature is right.

I think you've pulled off a nice loaf that looks full of flavour. I've made Swiss Farmhouse bread a few times, but I leavened it using raisin yeast water (takes about 6 days to ripen). I like the idea of adding some cinnamon to the raisins and walnuts. My yeast water version did not have any acidity at all and I missed it a bit. I bet it tastes great.

Thanks Gavin! I've made the Swiss Farmhouse loaf using yeast water a couple of times too, and it was delicious. I guess there Hamelman wanted to avoid the purplish colour from the walnuts, but still use natural leavening? Interesting experience anyway, using yeast water. I wanted to make this one a little different, and with more whole grain. And the acidity is not really prominent anyway, with all the raisin, walnut and cinnamon flavours.

What I don't get is why the crumb is so soft and tender... A lot of water from soaked raisins released during the bake? Or just the bulk ferment taken very far? It's a very pleasant texture anyway.

Looks delicious Ilya, cinnamon raisin is always a good bread to bake and eat.  I recently purchased a bottle of toasted walnut oil to add to the dough the next time I bake a loaf with walnuts to amp up the toasted walnut flavour.  Have you tried that yet?

I haven't tried walnut oil! I think that would work great, it must be delicious. Have you tried it in any other foods?

Hamleman's 3rd Edition has a 100% whole wheat sandwich bread that has toasted walnut oil. I was going to bake in the next few weeks and made up the spreadsheet for a 750-gram loaf. It is Debra Wink's contribution to Hamelman's new 3rd Edition of Bread. Surprisingly it's not sourdough but looks delicious.  Here is the formula for a 750-gram dough. And a precis of the process: Thanks for posting that Gavin, I hadn't decided how much of the walnut oil to try using and this gives me an idea of where to start.

It was TRS cinnamon - it doesn't specify the exact species, but from the price I'd guess it's also cassia. I didn't monitor the fermentation constantly, but there was nothing surprisingly slow about it at all. Sorry you are having issues!

Did you weight it out accurately? I used a precision scale to measure, it's a small quantity.

Yes, accurate measurements but it sure rose slowly. The resulting loaf is short and pretty dense but tasty. I'll have to try it again sometime.

Can't say my loaf was very airy either - with all the inclusions and whole grain a rather dense crumb is to be expected. As long as it doesn't have gummy texture? Glad you like the taste! Not sure why we got different results with fermentation activity - I kept my dough quite warm. Could just be a starter issue?