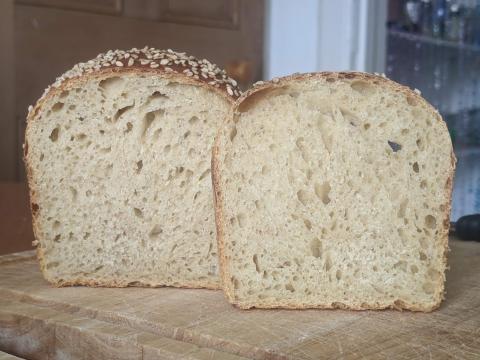 To continue the story of milk/sandwich bread, I decided to change it all up, and tried using semolina in the dough, to finally add an egg, increase the hydration (~70%), and do a double rise. Also made two loaves, but each was much smaller. Due to scheduling, I had to do a long retard too. Here is the formula: https://fgbc.dk/1moj

I made the dough late afternoon, left for a few minutes to hydrate, kneaded with slap and folds and thenand let it rise about 40% (in a straight sided container) at 28°C. Then it was late, and I shaped it and retarded until next evening, when I took them out of the fridge and proofed at 28°C again until about double in size. Brushed with egg and sprinkled with sesame seeds on top. Baked at 180°C on the lowest rack with top and bottom heat. Barely any oven spring, essentially just enough to smooth out any irregularities in the shape of the loaves. 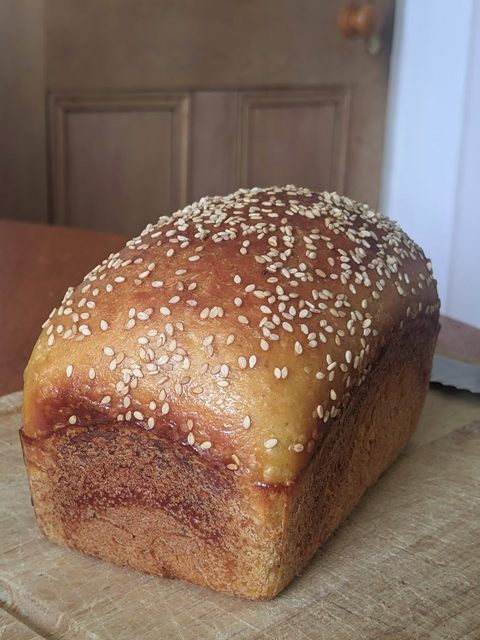 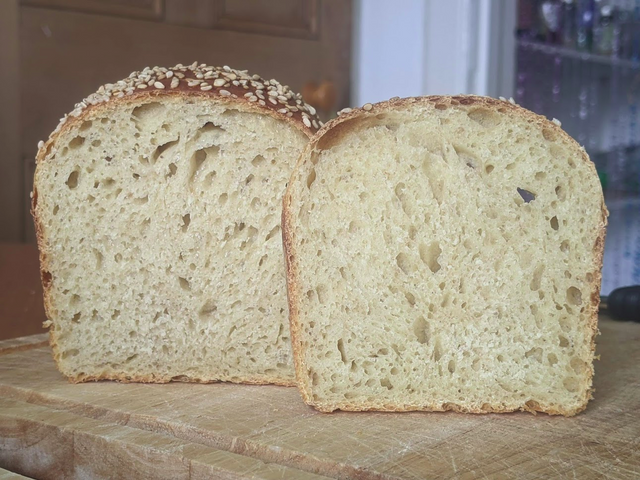 I love their look and the colour from semolina, and the crumb is just a little more open due to higher hydration. Not sure the higher hydration is worth it for this style of bread (tbh I just wanted to finish the bottle of milk we had and decided to try and see what happens if I don't adjust the flour, not specifically planned this), but I'd say the crumb is still sufficiently tight for PB&Js, for example. And the flavour is great. The semolina adds a little bit of that nuttiness, which is nice, although it somewhat disappears into background when using strong flavours for toppings. And a little sprinkle of sesame seeds is a nice addition!

I think one of the toughest things to figure out with pan loaves it the ideal amount of dough to prepare!  I’d say for this one you probably needed a bit more dough while the previously had too much.  I agree, the crumb is even and tight enough for sandwiches of any kind, nicely done Ilya and I haven’t seen a semolina pan loaf lately.  Funny enough I have a 100% semolina loaf started with the levain fermenting now.

These ones certainly could be bigger! I was planning to use this dough in just one tin, but then realized it looked too big and decided to split.

Whole milk does give a buttery flavour to the crumb too, more so than just water or skim milk.  I like that you can see from the pan lines how much it rose after shaping and between various steps.

Thanks Mini. I trusted the foodgeek's calculator to calculate the hydration, at least on theory it handles some dairy products and eggs correctly. I think it also felt about right for ~70%...

Yes, I liked using whole milk as the main source of liquid, very nice flavour for this style of bread. Most of the time we only have oat milk at home, and for most things it works great, but it just doesn't have this buttery taste!

I love the shape of them. What kind of loaf pans do you use?

These ones: https://scotlandthebread.org/product/bread-tins/ I have two small ones.

They seem to sell other other cool things as well.

Indeed! I got my bannetons, couche and starter from them too.

Great looking bake.  I’m actually working on a pan loaf myself for this weekend.  Give some cream a try next time and you will get an even richer flavor from the higher fat content.

Have you tried sour cream? That's what I have now in the fridge, never tried to use it in bread.

Hi Ilya. The loaf looks very nice. I'm always looking for a sandwich-style loaf that is nutritious, soft in the crumb and tasty, mainly for my young grandchildren. Well done. I've bookmarked this so I can give it a try.

Thanks Gavin, I think this would fit the bill! Enjoy.

Nice looking loaf Ilya, and that crumb is exactly what I'm targeting with each bake.  I need to start using sesame seeds in more bakes.  I've only used them a few times, but they really make a loaf look (and taste) nice.  Well done!

Thank you! I use sesame seeds so often, they provide such a welcome texture and flavour contrast! And they stick well, unlike larger seeds, e.g. pumpkin or sunflower. Poppy seeds also work well by the way, in case you like them.