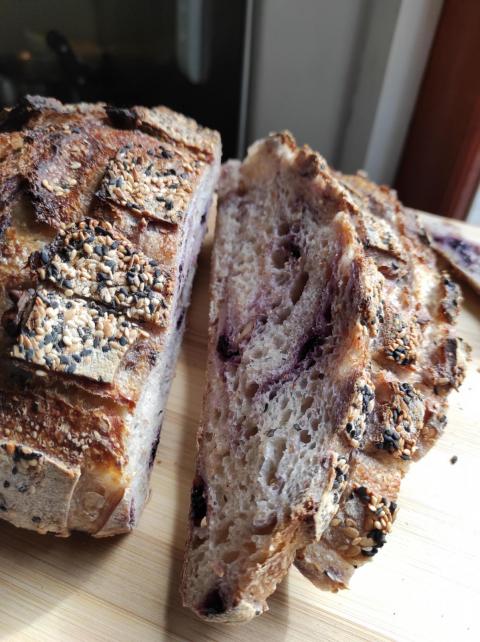 Have never made a bad olive bread. And the same is also true for breads made with blueberries! And when blueberry is in the dough the bread gets a beautiful painterly effect.

Previously I've made a blueberry compote and used that in the bread, but this time around I just used defrosted frozen blueberries that were then mashed. The juice from the blueberries was also used in the bread, and because of this I roasted the walnuts so that the net effect would be that one inclusion contributed extra moisture and the other withdrew moisture from the final dough. Using whole blueberries seemed to have worked well this time, although the blueberry flavour in the final bread was a little on the weak side.

I'm still going through a phase of doing long mixes in order to develop the gluten as much as possible, being inspired by some of what Mariana said about developing gluten. The stand mixer was used on its slowest setting (which is around 80rpm) with the dough hook for a very long time until the dough was no longer puddling on the bottom of the bowl and the sides were clean. This took 24 minutes in total, but in all fairness the bread flour used was a fairly weak 11.2% protein (and actually the wholemeal and wholewheat flours were in a similar ballpark too).

After mixing the dough was laminated and coil folded, but this bread was only coil folded twice in order to not disturb the blueberry swirls.

The thing that stands out for me about this bread is that fermentation was very slow. Perhaps it was the long mixing, perhaps my levain was weak to start with, but more likely it was the change of seasons and my kitchen was around 18°C (65°F) for most of the time. When the aliquot had not moved enough after 7 hours I put the dough in the coldest part of the fridge overnight and completed the bulk the next day - when it got another 10 hours before the aliquot finally reached 50%. I'm guessing that at least for the first few hours after coming out of the fridge there wasn't much fermentation activity, and also I lose trust in the aliquot once its been in the fridge (as the smaller body of aliquot dough changes temperature more rapidly than the main body of dough).

But it all worked out in the end! I loved eating this bread and was sad to see the end of it. Just love the 'fruit breads'.

This one also motivated me to go out and buy a polystyrene box and heat mat, so that winter baking won't be so painful this year. It has already changed my baking life. 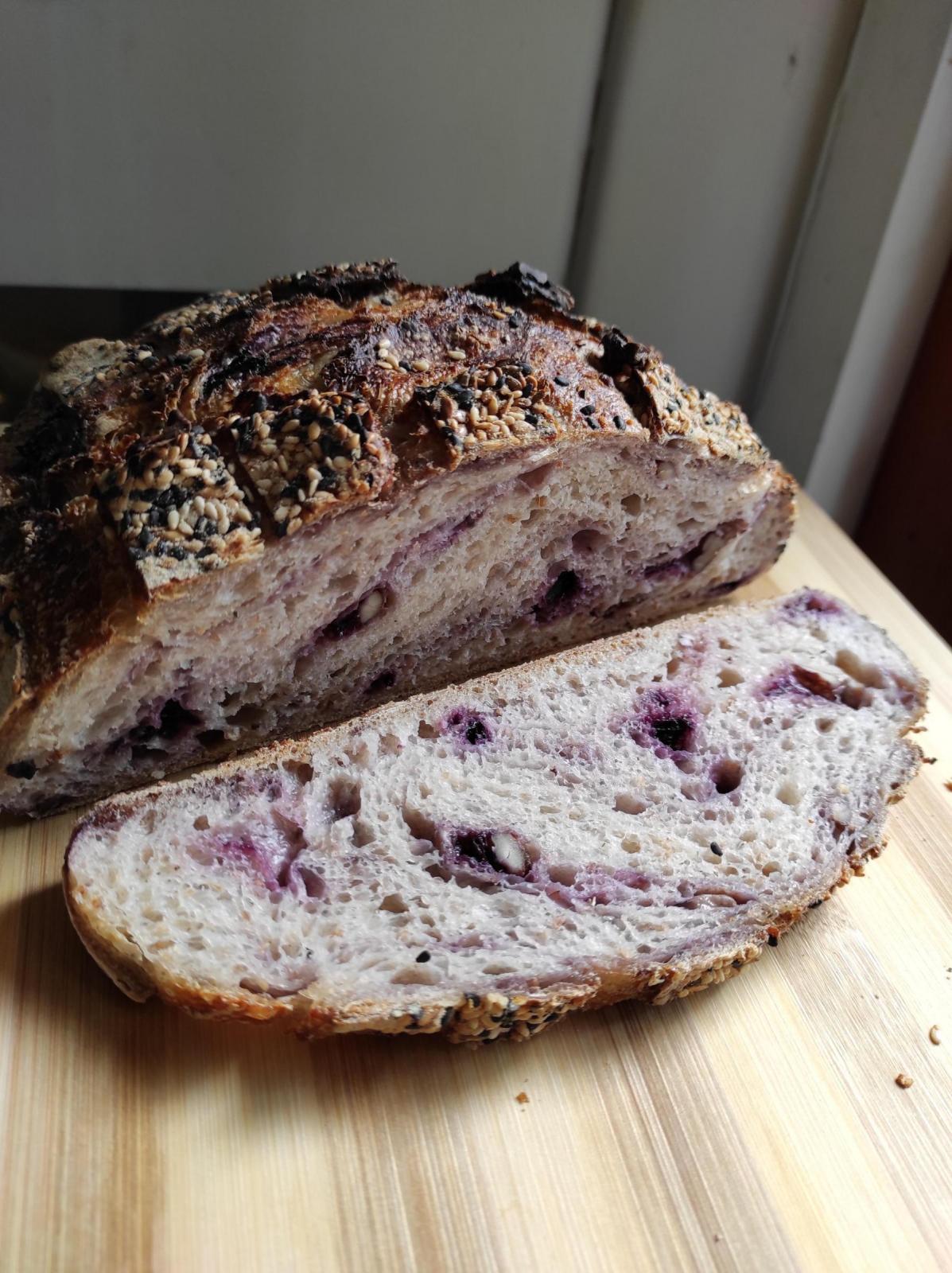 I have been planning to do a blueberry loaf and I love your blueberry walnut loaf.  Does it ever look delicious Jon.  I’m just wondering how to dealt with the blueberries.  So they were frozen and defrosted and then mashed, did you strain them to remove the liquid?  Did you then just use the liquid as a portion of the water when mixing the dough.

No, didn't strain them. Think I took a chance and got away with it. However, had some things in my favour:  it was only 50g of blueberries; laminated them in on top of already strong gluten; and deliberately roasted the walnuts so they might absorb some of the extra moisture.

Next time I'd like to double the amount of blueberries to bring in more flavour, and for that case I might need to strain them. The things is... the juice produces those beautiful swirls...

P.S. did not use the liquid as a proportion of the water. This dough was already of a lower hydration too - around 72% or so.

You've got me thinking about making something similar. Indeed, temperature is crucial factor and controlling it is somewhat of a game changer. I am sure you'll appreciate your investment in the heat mat...