Yesterday I baked Trevor Wilson's pan sandwich bread. Details of my bake are in my blog about this bake.

My question is about the compression of the crumb along the bottom and sides of the loaf. This doesn't happen to me all the time, and I don't understand what causes it when it does. Note, this photo makes it look gummy/underbaked, but it isn't at all in real life. It's a bit of a lighting quirk in the photo, but I realized that made it easier to see the compression of the crumb in the pic.

What is the most frequent culprit: is it a fermentation issue? Hydration? Not enough gluten development?  And don't get me wrong, the loaf is more than edible - it's quite pleasant and already 2/3 gone, lol. Any info is appreciated. 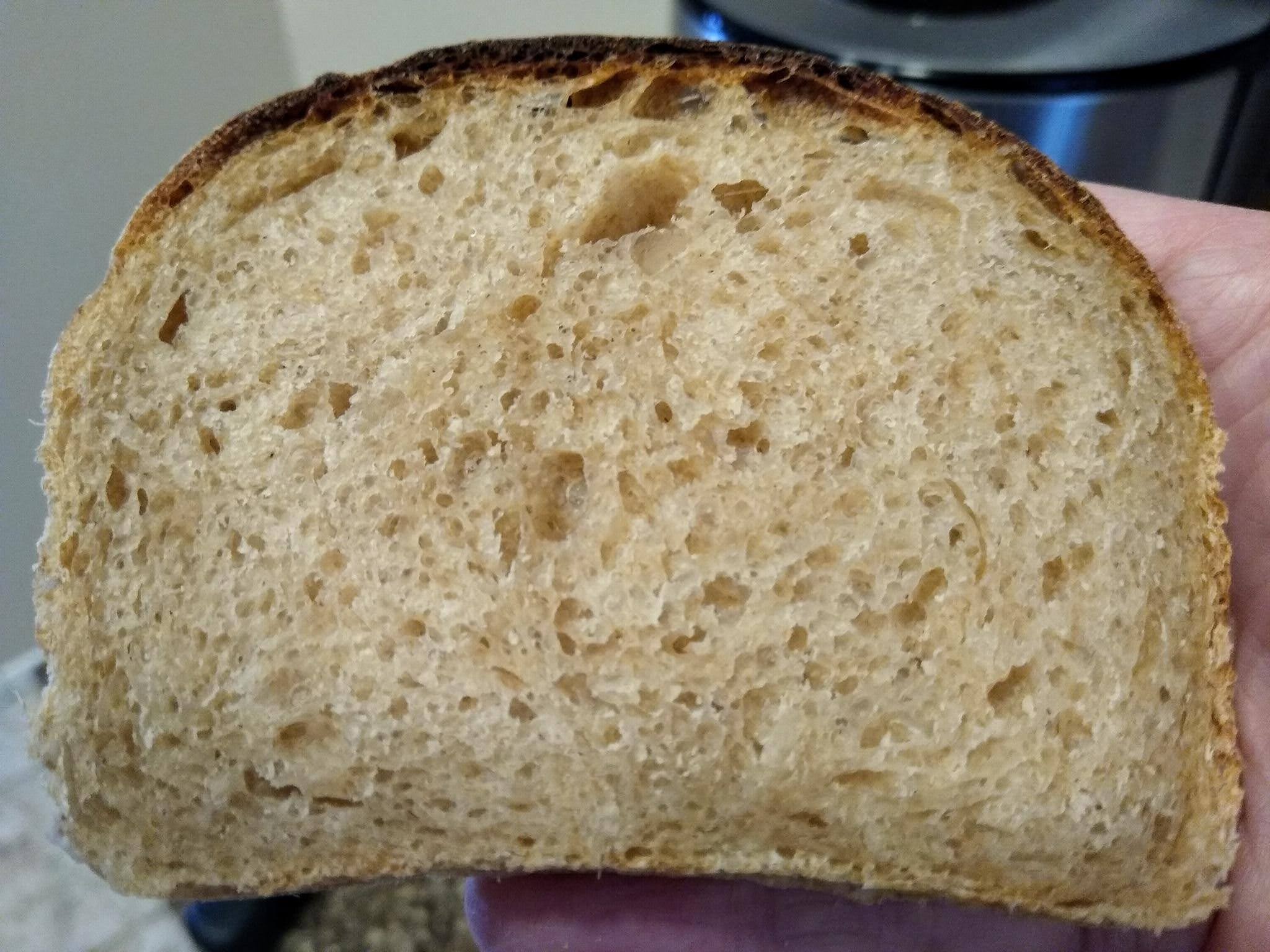 I see similar bands though sometimes narrower than that.

I look forward to answers from the wise ones.

Can’t quite tell from your picture if you are seeing the same thing I was, but I had a similar question.  Might be some answers in this thread.

Thanks Troy, helpful info That could be it for this loaf

For once I was trying to stick to the recipe as written, except for the addition of a little whole wheat. (I have a bad habit of not following recipes as closely as I could...) I did add an additional 6 -7gm of water which seemed to make kneading easier, but the dough still felt a tad on the dry side. Most of the bread I have made has been a little higher hydration and I wasn't sure what to expect with this.

I need to make another loaf tomorrow (this one is nearly gone already 😄). Will try a little higher hydration and keep everything else the same. We'll see what happens, will keep you posted. Thanks!!

It seems to be an artifact of the way the dough expands as it bakes.  Since heat penetrates from the crust inward, the first portion of the dough to expand is at the pan boundary.  As the bake progresses, heat penetrates far enough inward that the center of the dough eventually expands.  Some of that expansion at the loaf's core will drive the top of the loaf upward and part of it will compress the previously-expanded portions of the crumb that are adjacent to the pan.

From what I've seen, there really isn't a way to make this go away.  It may be more or less obvious from one loaf to another but just about every panned loaf has some amount of crumb compression at the pan boundary.  While it may not be as aesthetically pleasing as seeing a crumb that is uniform from edge to edge, it really isn't a problem.

Thank you and Paul both! Really helpful info.

I really appreciate having a better understanding of the overall concepts to look at. It helps considerably for deciding whether any adjustments are needed in the moment, during mixing/fermentation/baking, etc. I don't expect perfection by any stretch, but do enjoy understanding why/how things work.