Mixed everything except butter, left to hydrate for around 30 min, then kneaded in soft butter and developed some strength with slap&folds. I actually started really liking kneading in butter by hand: takes some time, but leaves hands smelling buttery, and the dough feels very nice and silky smooth. Left to bulk at 28C. Got distracted with a long work meeting and by accident left it to grow more than double in size, in around 11 hours altogether! The biggest bulk rise I've had, probably, and way more than what I wanted, and should have stopped much earlier. Regardless, it was late, so shaped into a pan loaf (already felt a little overfermented, but totally manageable) and put in the fridge overnight. In the morning wanted to let it rise, so warmed up at 28C until it felt like room temperature, and clearly rose (didn't rise much in the fridge). Baked as Maurizio recommended, after giving it an egg wash. Had a very big oven spring, so probably could have final proofed even more. Top crust got torn a little too. 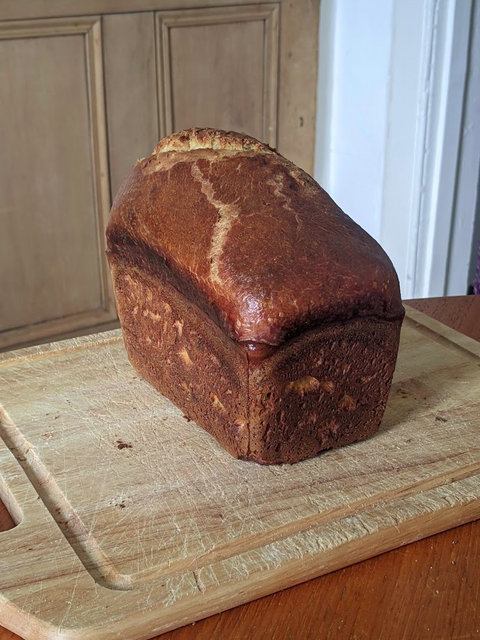 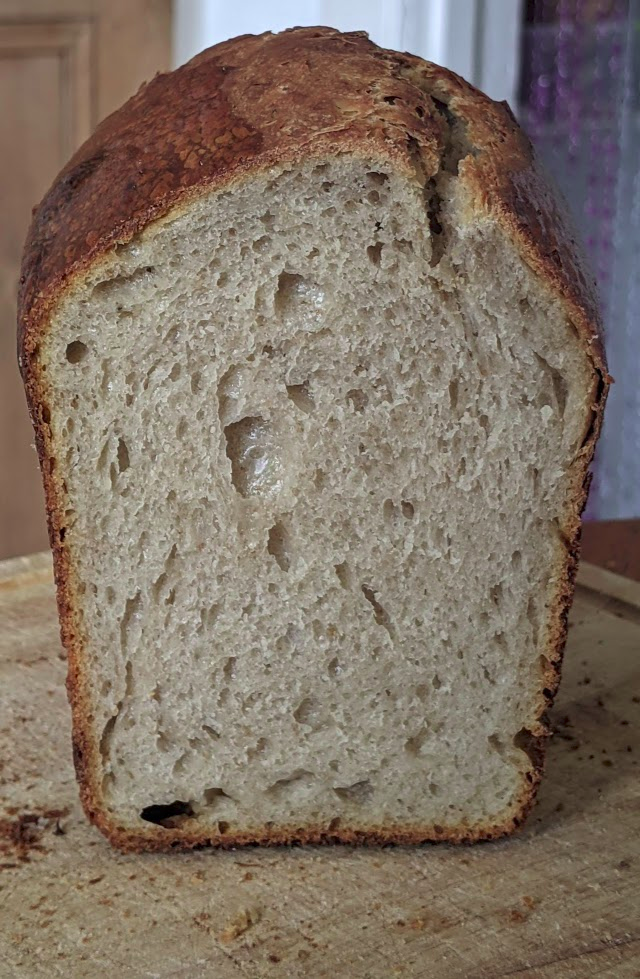 Tastes good! A little more sour than I expected, but that's what I get for getting distracted for a few hours. I'll bake it again with more attention :)

Also, nice to have an enriched dough rise so well after the recent fail, although the level of enrichment is not really comparable.

Good outcome considering the looooong bulk. I was intrigued about using a rye starter directly from the refrigerator; something I would not have considered.

Thank you Gavin! Rye starter stays active in the fridge for at least a week (and still usable directly for much longer than that, with longer bulk fermentation time). Usually if I don't want any rye taste in the bread I build a leavain, but this time I didn't plan ahead so just used it directly, but in smaller amount.

Very nice Ilya, tons of oven spring!!  I haven’t added butter by hand yet, did you try the butter flour trick of mixing butter with flour of equal weight before adding it to your dough?  I’ve tried it with machine mixing and it works great and plan to try it for my next milk bread which I’ll try mixing all by hand.  I fear I’m killing my stand mixer by using it to mix milk breads.

Thanks Benny! I actually remembered you posted (on IG?) about that trick recently, but it was too late to try it. I'll try it next time, if I remember, it does sound like it should help. But also, actually mixing in butter is not as difficult as people often lead you to believe - it just needs to be really soft (I microwave it until it just starts melting a little), and combination of folding and "massaging" it in to incorporate, and slap and folds to distribute it evenly, works really nicely.

I do the same with the butter.  I rub it into the flour before adding water to the final mix.

Really nice looking loaf.  How did you bake it?  That’s such a deep color to the crust, especially with no whole grain.

Thank you! Baked like Maurizio recommends: 220C 35 min, then 10-15 min at 190C. It has an egg wash on top, and my pans always make a nice crust on the sides :) Also I guess sugar and butter in the dough help with browning.