Wondering what idea shared on this site has been your baking game-changer.  For me, it was Benito’s use of the aliquot jar to monitor the bulk ferment.  Magic!  https://www.thefreshloaf.com/node/64897/aliquot-jar-determine-bulk-fermentation-rise

Whole rye starter! To keep in the fridge with no loss in activity for a long time, and with no discard.

I’ll have to agree with Ilya, switching my starter over to rye has been my game changer.  I now have a predictable reliable very active starter that builds active levains of any kind.

If I can have two, my Brot and Taylor proofing box allow me to have consistency in bulk fermentation even during the cold winter months here in Canada..

As a third, the aliquot jar has also been super helpful to me and really improved my baking, I didn’t learn about it here thought, I first heard about it from Kristen of Full Proof Baking.

You overstepped your bounds with the proofer box.  Some Toronto bakers are just plain greedy! 😬

I needed all the help I could get, one game changer wasn't enough.  😉

After listening to Jeffrey Hamelman's ISO videos he made some comments about his personal rye sourdough starter. I made some notes and followed what he was doing. I migrated my white liquid starter to a stiff rye starter and followed his feeding regimen. I shared my notes about this on TFL at Solved my starter issue | The Fresh Loaf

My sourdough bakes have improved immensely since adopting his method.

For me it was Susan from San-Diego's methods.

She baked  loaves made from sourdough starter, not with, but from - the entire batch of refreshed sourdough starter was baked into a loaf, and she baked loaves with the hugest oven spring without steam and even without baking stone, or cast iron pot. Just a simple enameled pan, covered with Pyrex bowl. 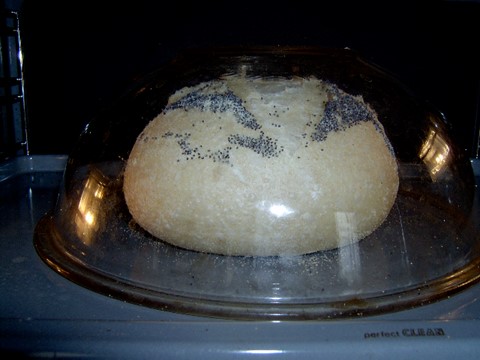 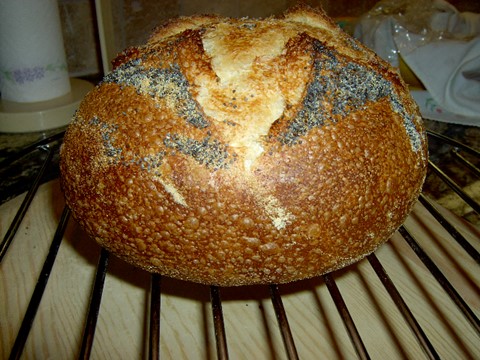 She hasn't posted in a while, but her blog is still here. And her breads are simply the most amazing ever, and so simple to bake. Well, at least they look that way to me.

Her Ultimate Sourdough bread: no-knead, 100% made from sourdough starter, I have never seen anything as simple as that and more suitable for the beginners. It's similar to the idea of 100% sponge bread. 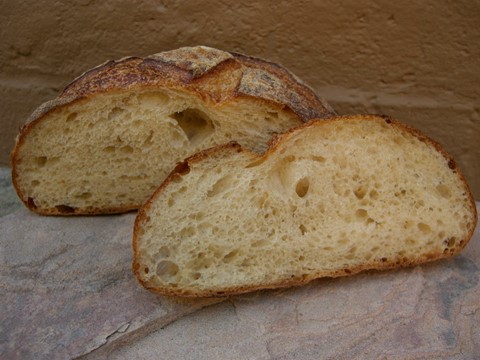 I recreated her ultimate 100% sourdough in my kitchen, made from ripe starter which  is salted after fermentation and baked into a loaf and was successful immediately. This convinced me that no-knead breads work and there is an easy way to bake a sourdough loaf starting from 1 Tbsp (12g) of starter refreshed 1:40, without struggling with gluten development, levains, etc.: 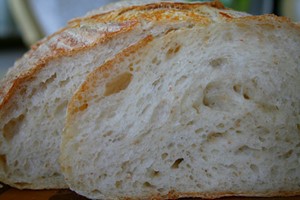 And I tested her method of baking under Pyrex bowl on a simple non-preheated baking pan and fell in love with it: 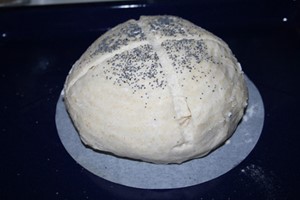 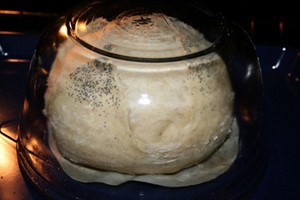 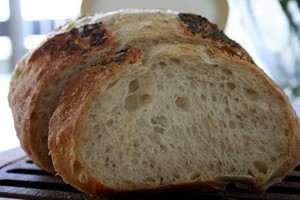 I checked out Susan’s blog. I understood you to say that Susan baked breads with no additional flour added to her starter. “ She baked  loaves made from sourdough starter, not with, but from - the entire batch of refreshed sourdough starter was baked into a loaf”

Copied from her blog -

I was also curious about that and had a look. I think Mariana meant that the dough is first fermented with no salt, then when bulk is done salt is kneaded in and the dough is shaped and final proofed.

it is not really "the dough with no salt", it is pure sourdough starter fed 1:35, no different from any starter refreshments let to ferment until doubled in volume. There is nothing else in it, just 1Tbsp starter + flour + water.

Except it is not kneaded, not even to homogeneity. It looks exceptionally lumpy and shaggy.

Normally, I blend my starter with flour and water, when I refresh it, more vigorously. I whip them until smooth and shiny.

This starter becomes 100% preferment or 100% sponge, 100% of all bread flour is prefermented inside that refreshed starter and used as a base for bread: everything else is added to it, in this example, just salt, no kneading, no bulk fermentation (it's a no-time dough), shaped, proofed and baked.

I meant her Ultimate Sourdough Bread which impressed me so,

this recipe copied from her blog:

100% of all flour in the formula goes into sourdough starter refreshed 1:35: Mix starter and water, mix in flour. Rest a few minutes, then re-mix. Dump into a greased bowl, let rise until doubled, about 8 hours. 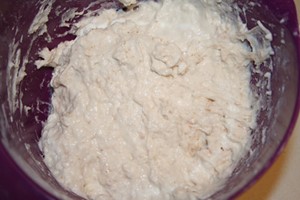 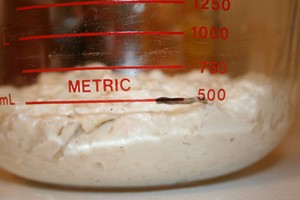 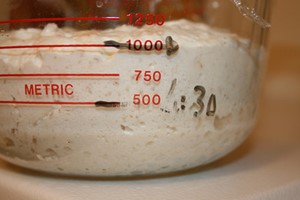 Salted: Turn the very soft dough onto your counter and pat it out, then sprinkle salt over the top. Roll it up, then gently knead a few times to distribute the salt. Let relax. Do the following until the dough is hard to fold: round up, let the dough relax, stretch and fold. 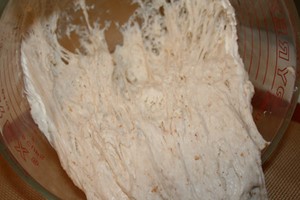 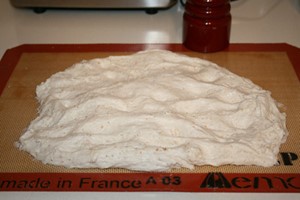 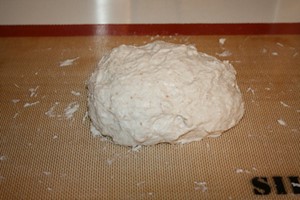 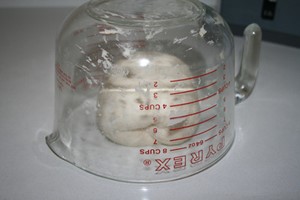 folded tight and resting before shaping 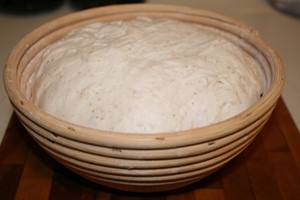 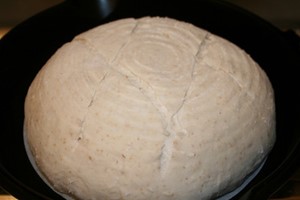 Baked: The oven was preheated for 30 minutes at 500F, and reduced to 450F after I put the loaf in. It was baked on a tray, covered, for 18 minutes. The cover was then removed and the loaf baked until dark brown, about another 8 minutes.

I don't bake until dark brown. I prefer brighter crusts, so I bake at 450F from start to finish: 18 min covered + 8 min uncovered.

Of course, Susan baked many other more traditional no-knead breads as shown in her later blog entries, which are salted from the start. But for me the 'game changer' was the idea of 100% flour in no-knead preferment which is never really kneaded afterwards either, yet the results were excellent even with our very strong Canadian bread flours and her hi-gluten All Trumps flour.

I was testing different no-knead methods in sourdough baking back then:

and Susan's approach was truly revolutionary, her own interpretation or variation of Lahey's method, a game changer for me.

Only later I found out that it was 'officially' called 100% flour preferment method by bread technologists since 1940s and truly was the method that gave one of the best outcomes ever: best aroma and tenderness to bite, exceptionally tasty, the fastest proof before baking and great oven spring if baked with cold steam (at home: baked covered cold, dry), the best keeping qualities. Susan reinvented it in her kitchen.

She taught me how to make my first sourdough loaf!

After a few different baguette tries with minimal satisfaction I came across TFL , as so many of us have while searching for some answers.  I guess at the time there were a few that stood out, but the Bouabsa posts tag-teamed by janedo and dmsnyder intrigued me enough to give it a go.  Like a dog with a bone I stuck with it, time and again, rarely moving off that page, until I felt confident to go on to another and then another...