Week #2 of working on my list of TFL'er bakes I've been wanting to try.  This week was one of Ilya's rye bakes.  Well, not exactly one of his bakes, but with his guidance and tips, I tried this recipe from Rus Brot.

Overall, the bake went really well I think.  Each step of the process went according to the video, and I had similar results.  My only difficulty was proofing temperature.  My maximum temp is 84-85 deg F, so I was a little low on the final dough fermentation and the final proof temps.  However, everything progressed just fine even at the slightly lower temps.  I also had a to guess a little bit on the consistency of the final dough, and I added 10g of water above what's listed in the method below.

It looks like I maybe blistered the crust, and I think it happened on the second misting towards the end of the bake.  My guess is it should have been a light mist, and I moistened it quite well.

This was a great first bake for high rye, and the bread smells great!  Giving it at least a day before slicing it. 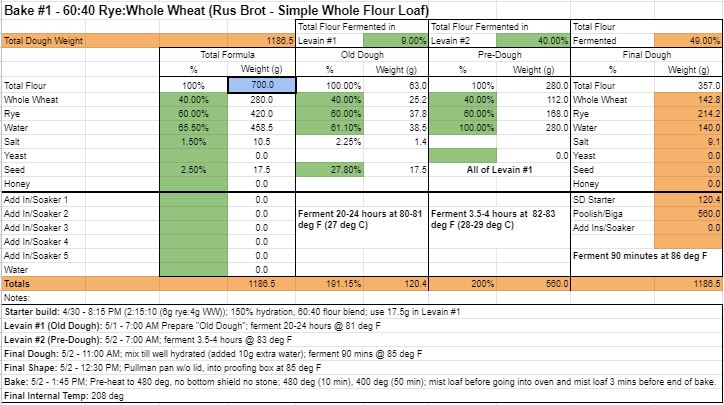 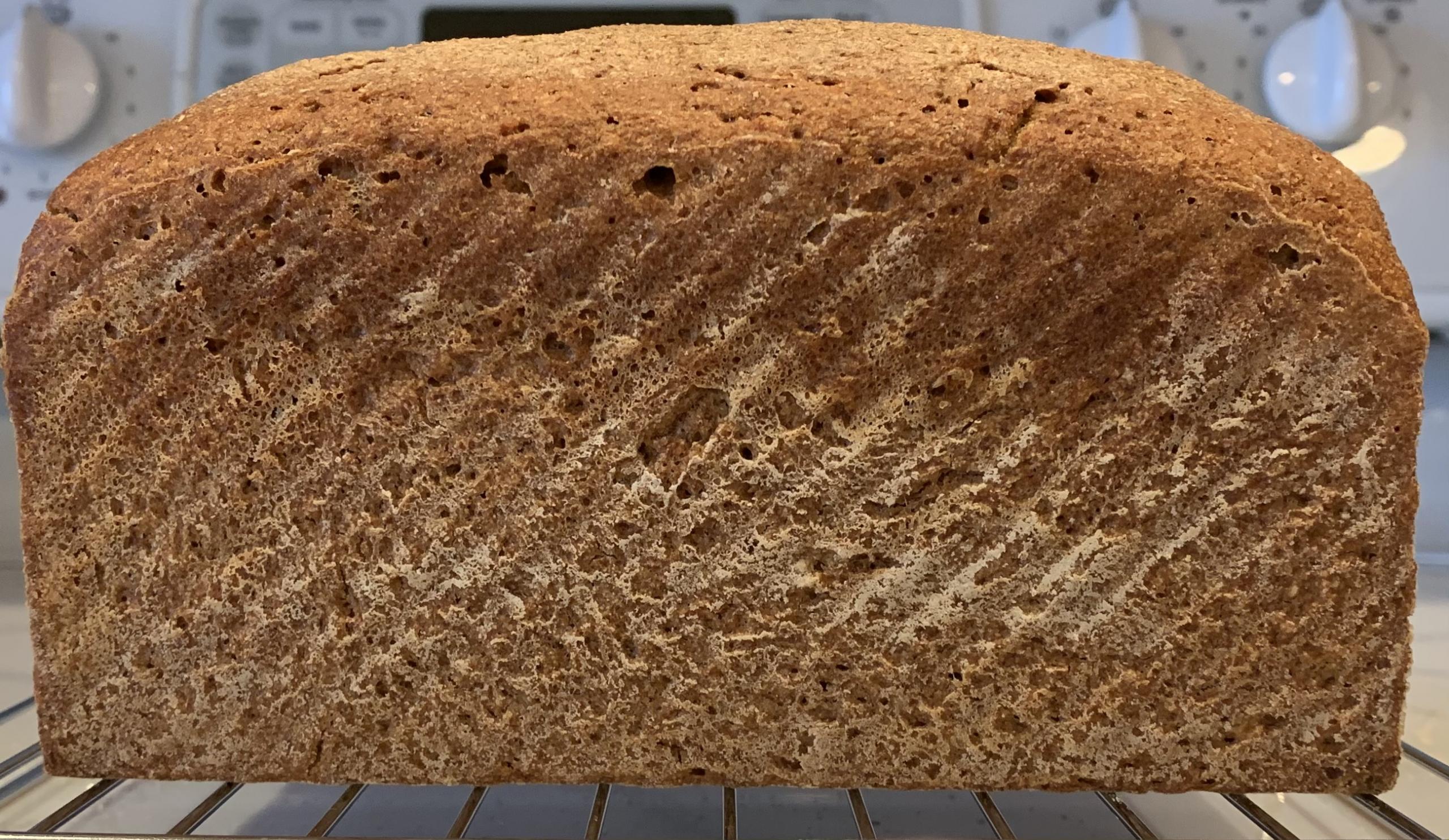 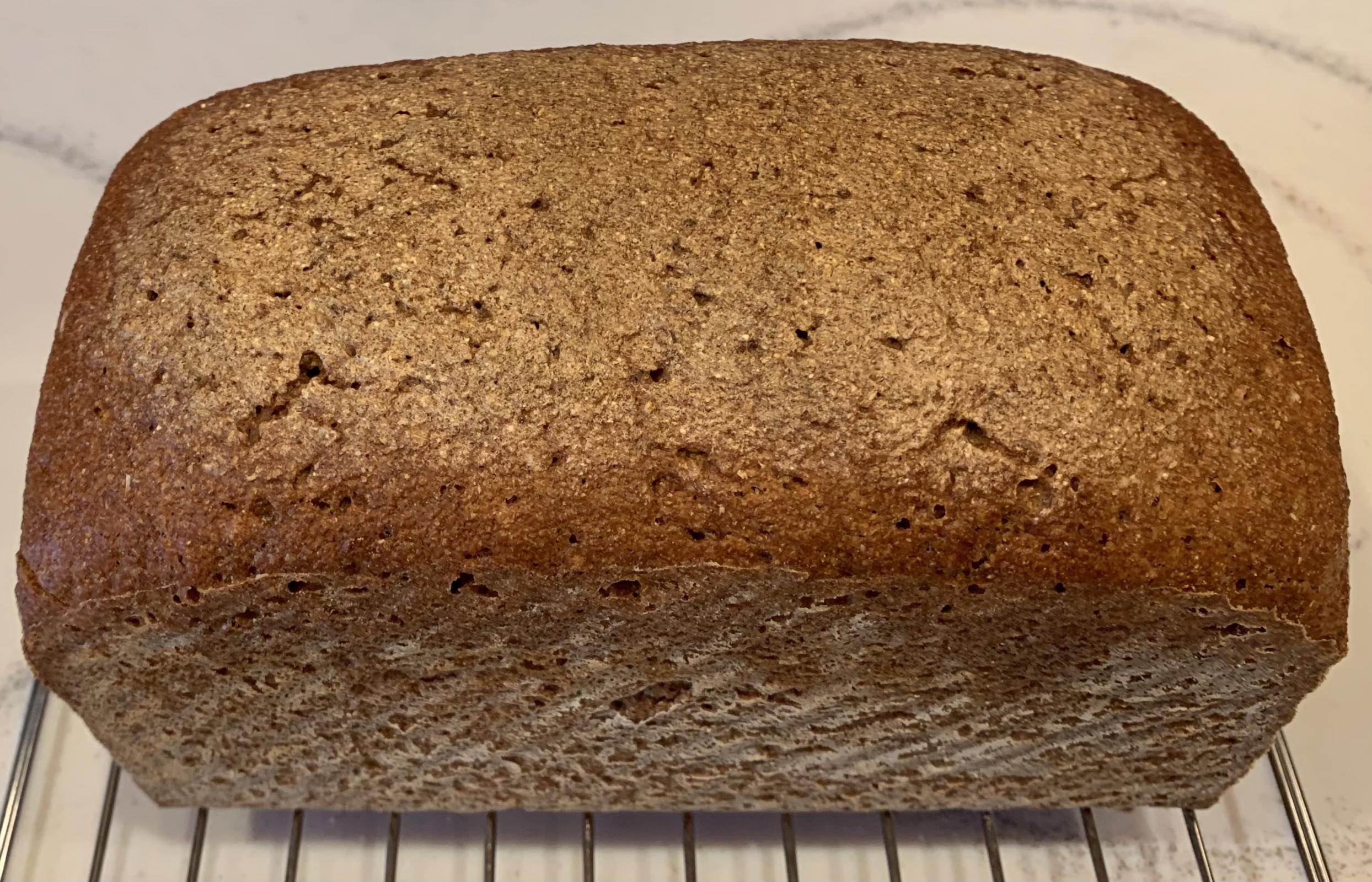 Nice looking loaf! Congrats on your first rye bake, and looking forward to seeing the crumb. Hope you like the bread!

Did you enjoy working with this kind of dough?

Thanks Ilya, and if the smell is any indication, I’ll like it.  😁

I did like working with the dough.  Your tip for using gloves was a big help.  We had some food service type gloves in the house, and they worked great.  The gloves and the slightest bit of water kept stickiness to a minimum.

The hardest part for me was knowing where to be with the final dough consistency.  We’ll see how I did when I slice it.

I agree with Ilya, Troy that looks great.  I bet it’ll taste really great.  Will you leave it for 24 hours before slicing?

Thanks Benny, and yes.  Will be closer to 36 hours.  I have a lunch planned for work, and I’ll be taking the loaf there.  Will slice it tomorrow morning and post a crumb shot. 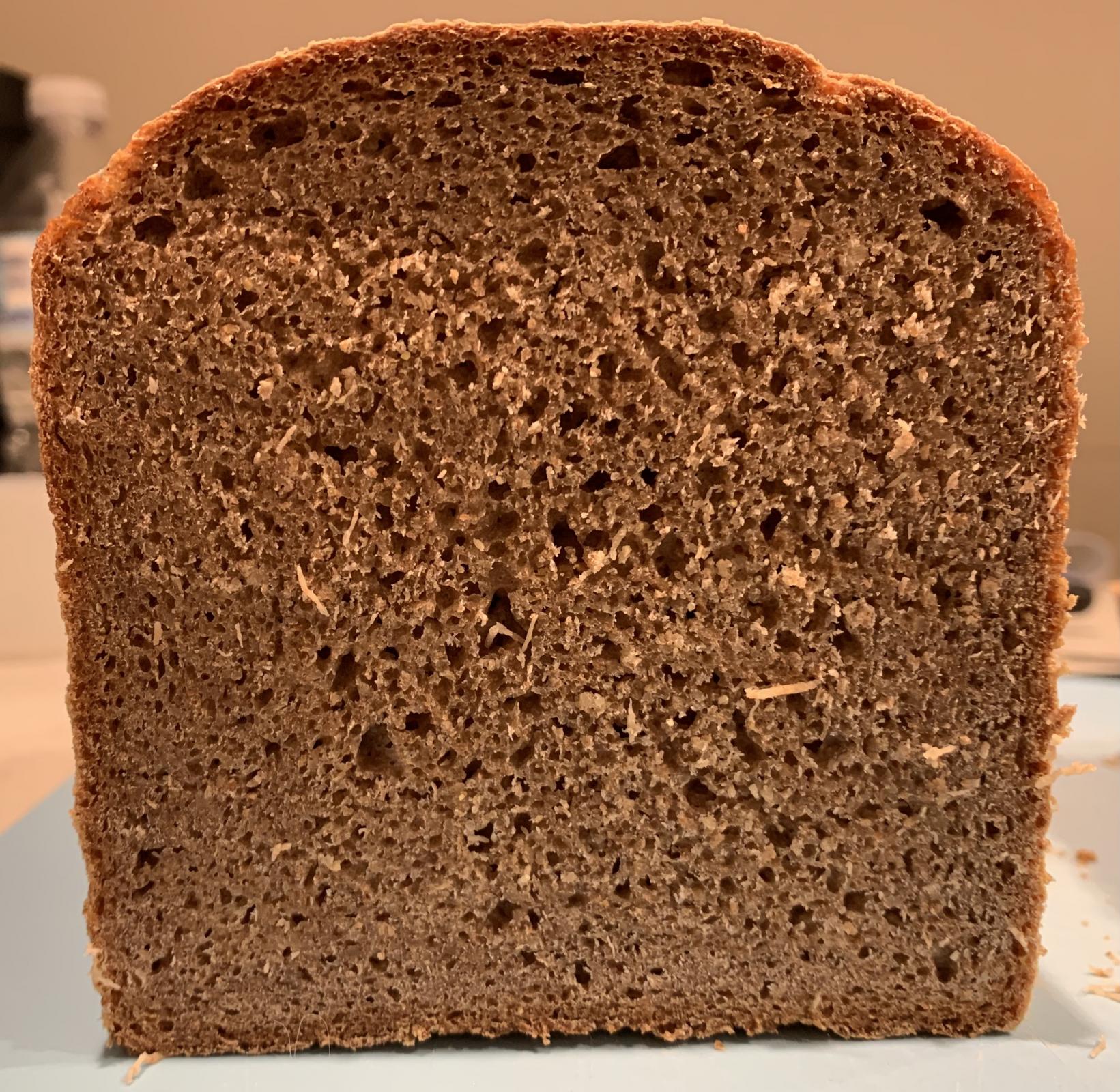 My first guess is underproofed, but I was starting to see a couple holes appear in the top of the loaf during the final rise.  Thought that was a sign to get it in the oven.

So, not sure if under proofed, over proofed, or not enough hydration...  Tastes great though!

it looks pretty similar to the ones in the video. Did you use a baking stone? I feel you get more airy bottoms on tin loaves that way.

Interesting...  I didn’t use a stone.  Put the Pullman pan directly on the oven rack after pre-heating.  That picture was 3-4 slices into the loaf.  It was a little more uniform and open towards the center of the loaf, but not too much different.

It made great toast and grilled sandwiches.  😁

I think I want to try this next.

Great looking loaf!  In my hands, the crumb texture varies much depending on which whole wheat flour I add.  One "artisanal" ww flour consistently gives gummy crumb in the 50:50 breads.  If the temperature of the dough was consistently high enough the entire time, around 85°F, then I'd try extended kneading, which is suggested by many rye bakers for a better crumb: less gumminess, more strength.

Thanks for the info!  Now that you mention it, I didn’t do a whole lot of kneading.  Enough to make sure the dough was well mixed, but not sure I went too much beyond that.

Not sure how it applies to home baking, but it has been suggested that 100% rye doughs need at least 20 min. of kneading, even in industrial grade mixers, and not for the purpose of gluten development.   This is how long food scientists say it takes to go through three rye dough mixing stages, each characterized by a distinct process: hydration (takes about 3 min.), coagulation (3 more min.), whipping (10-15 more min.).

Hand mixing at home might just stop at the hydration stage.  It seems that this is just what Rus Brot does.  Unless more kneading is done off camera?

Where could one read more about rye dough mixing? Hamelman says to simply mix a smooth paste. (10 min on first speed.)

Yes, Hamelman's "ten minutes of mixing on first speed" for 100% rye might be consistent with the idea of extended mixing/kneading (I've got a pdf I can share which Google makes readable).  Even though he says that the intention is "simply to mix a smooth paste". The ten minutes of mechanical mixing of a loose rye dough might be enough to get it well into the "whipping" stage.   Don't know if hand mixing for the same time is as effective.

I would be interested in that pdf on rye mixing. I have made a couple of rye recipes where I believe my hand-mixing did not approximate the extended mechanical mixing time, nor approach the necessary stages of complete mixing.

Ooops missed you posted the crumb!

Doesn't it look exactly like what Rus Brot shows? I think you did everything right! It's 100% wholemeal bread with 60% rye, you can't get an open crumb. I am still yet to bake this myself, but I am not expecting anything significantly different from this. You say you like the taste - is is noticeably sour? It should be very flavourful from the old dough, and all whole grain.

Overall, I think it was similar to Rus Brot.  His bread looked a little more "tender" and easier to slice.  I think the crumb was what I expected in the middle of the slice and towards the top.  The dense area along the left edge and bottom surprised me a bit.  It did get a little more uniform towards the center of the loaf.

Flavorful and I would say not noticeably sour.  Not bitter either.  Just a little bit sweet maybe.  Made great grilled sandwiches!