Baked again the formula I shared previously almost identically, and again the flavour is so good! Just wanted to share again. Formula: https://fgbc.dk/1j1t Hydration around 78%, but probably could be increased a little without issues.

Mixed everything, left for 30 min to get not sticky, developed gluten well with slap&folds, left for 30 min, then, uncharacteristically for me, decided to do a lamination fold - and then just left in a straight sided container at ~27C until around 50-60% rise (despite low inoculation, only took around 6 hrs! again, this dough rises really nicely). Gently preshaped, left for around 30 min to relax, then shaped and left for 30 min at room temp in the bennetons, then refrigerated for around 12 hours. Looking at the crumb, probably could push the fermentation even further. Baked on the steel, around 20-25 min with steam @260C, then without steam until good colour @230C. 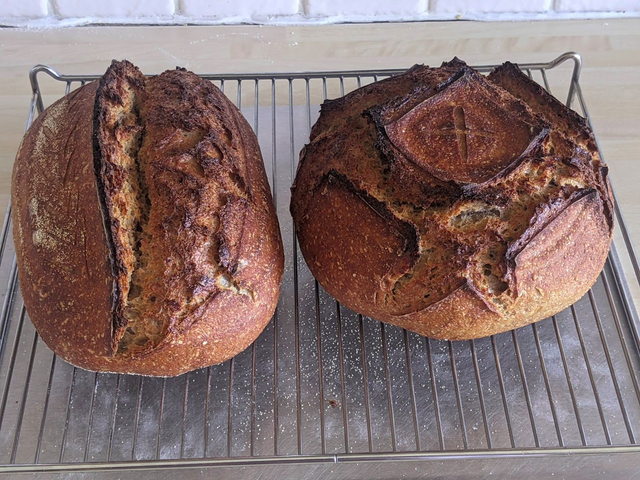 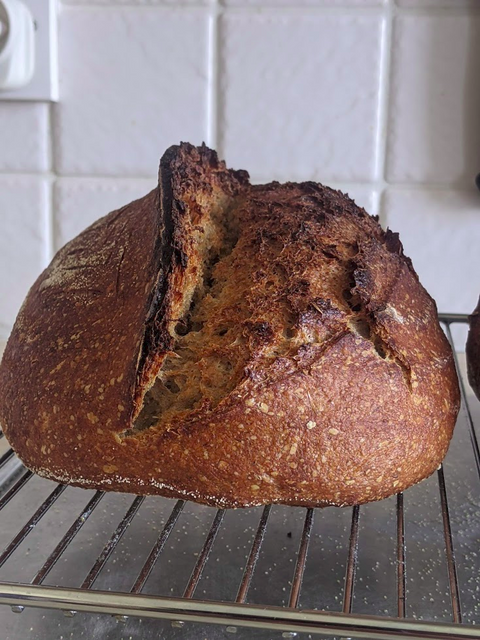 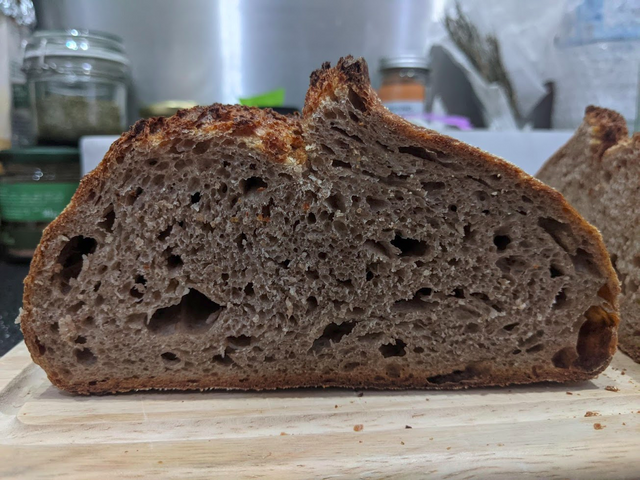 Love the colour of the crust I got this time!

Very flavourful bread, with a clear tang, but not too sour. Really like this formula for a mostly whole grain bread.

The flour combination looks like it would taste wonderful. I've recently baked a 75% whole spelt loaf for the first time and was surprised just how wonderful it was. Well done.

Thanks Gavin, I also like this combo - very flavourful, but without any particular taste dominating, nicely rounded profile. 75% spelt is impressive - saw your bake, very nice result with not such an easy grain!

Great bake Ilya, ~60% whole grain with more than half of that spelt.  Great oven spring and bloom.  Spelt and rye are a good tasting combination.  I also like the colour of the crust, very nicely baked.

Thanks Benny! Do you also think it could use a little longer ferment? I couldn't do it for much longer anyway, was getting late, but could have given an extra 30 min perhaps, or let it warm up a bit before baking.

Yes Ilya it might have benefitted from a bit more fermentation.  My experiences with whole red fife make me a bit hesitant to recommend too much fermentation when working with a lot of whole grains, but I have used 40% whole spelt and 40% whole Kamut and was able to push fermentation pretty far.  I’m just a bit more gun shy now.  But to answer your question, I agree you could have gone a bit more I think without overproofing.

Thanks Benny! I mentioned somewhere - I realized a lot of my bakes have actually been a little under fermented, so now I'm trying to push it a bit further, but it's scary :)

I totally get that, for a while things were great I was pushing bulk and then I started those 100% whole grain bakes and then started to overproof.  That drove me mad, I hated baking pancakes again, felt like I had just started baking like 2 years ago.

Really nice bake Ilya.  I agree, that color is phenomenal!  Crumb looks really good too.  Does it have a sour tang?  I did my first sourdough bake with higher spelt content (15%) this weekend, and I was surprised how sour the smell of the crumb was when I sliced it.  Not sure if that's the nature of a SD spelt or just my starter/fermentation for this bake.

Thank you! It sure has clear sourness to it, I think whole grain promotes it in general. I don't know if spelt specifically has a strong effect on this.

Great Bake, Ilya, that colour looks exceptional. Can only imagine the taste unfortunately!

Thank you Jon! No idea what caused such a beautiful colour, but I love it. And a great taste.