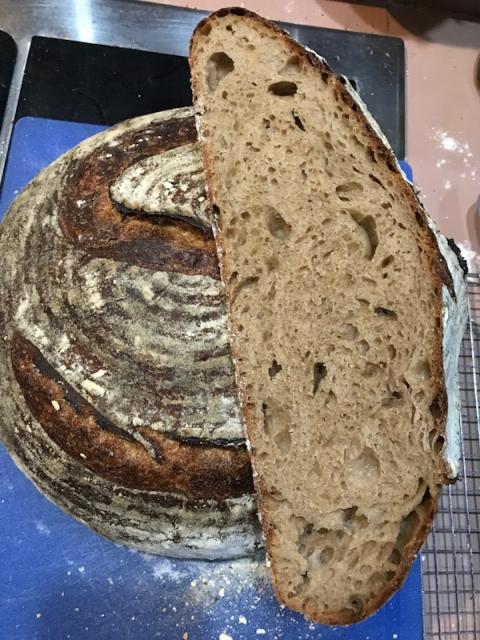 In my quest to make a perfect, consistent, large miche (~2kg), I have made a slow transition from partially yeasted to my current formula, which is sourdough only, 80% hydration. I'm learning that different flours behave very differently, and many of my experiments have resulted in mud, pancake-flat loaves, giant air chambers, flying saucers etc.

I have a good formula; no question about it. Problems arise from things like shaping technique, insufficient folding, excess hydration for a specific flour, and a biggie: insufficient steam while baking. I've found that even if I do everything else right, lack of steam defeats me, sometimes turning the miche into a basketball, or a strained sofa-cushion shape.

I just bought the Camp Chef 14" Deluxe Dutch oven, after many attempts with baking stones and steam pans, inverted hotel pan, Le Creuset, clay bakers etc.  Nothing gave me the results I was looking for.  This inexpensive dutch oven had two qualities that make it uniquely suited to my needs: it has a lid which is designed to be a frying pan surface, so it has a raised edge and flat interior. My largest banetton can be flipped into this lid with room to expand. Second, it has a relatively deep pot, which provides enough room for the expanding miche plus steam all around it.

I preheated the dutch oven for about 40 minutes at 450F. Handling with heat-resistant silicon-covered gloves, I put the base on the stove top, inverted the miche onto a peel, then slid it into the frying-pan-lid. Quicky slashed, covered (carefully) with the inverted hot dutch oven base, then back in the oven to cook for 20. Then removed the inverted base and baked for another 30 minutes.

Contrary to my usual practice I left the oven on Convection. My reasoning was that air can't get into the dutch oven, but the convection would heat the iron all over more effectively. This worked out well. I should mention that I put a flat baking sheet under the DO so that it could sit on the oven rack properly. This also helped prevent over-baking the bottom crust.

I got very good oven spring, similar to what I get with a 2 lb loaf in a clay baker or le creuset. Blistering, indicating steam, good secondary expansion in the slashes. Very caramelized crust due to keeping the convection on for the entire baking cycle.

I am happy with the openings, I think they are good for a 45% whole wheat loaf at 80%. I compared to a Red Hen miche, which I consider to be excellent, and they are very very similar, except my loaf is twice as big. I've included a photo that shows side-by-side comparison with a Red Hen Vermont Miche. Difference in color and ingredient list indicates that they use less  ww flour %, and also lower hydration than my loaf.

The ww flour I am using (Bronze Chief) is outstanding IMHO.

It has a good price and mostly good reviews on Amazon. But a few reviewers noted casting defects.

Is yours rough to the point of snagging the cloth or paper towel when you wipe it out?

I have the Lodge 15" skillet, and use an inverted stainless steel bowl to cover, and can fit a 2 kg mostly WW loaf in it.

OK, posted a few more photos.... need a way to reduce their size on MB Pro, this interface is a little tough for me.

The quality is fine for what is needed to bake bread. I wouldn't probably cook in it, but my son has expressed interest!

The casting seems fine, obviously not as smooth as Lodge of some of my vintage cast iron pans. I rinsed out and dried the lid, then applied just a trace of grapeseed oil prior to heating. Worked perfectly. No other lubrication of the pan other than some rice flour that was on the bottom of the loaf. No sticking. I wouldn't wash it, just knock out and wipe between uses. I'm storing it inside the oven because it is Big.

Thanks for the photos.

If he were in France, Sir Mixalot would say "I like big miches, and I cannot lie. You other brothers can't deny ..."

We wandered in to the Poilane shop in Paris, looking for a baguette 😂, came out with this huge loaf. Surprisingly, it was a pretty dense crumb.

Fine looking miche Sue with a lovely crumb.  I also like your original scoring, it is very attractive. That dutch oven looks perfect for you 2 kg miche, thanks for sharing that information there will be others on TFL who are interested in something like that.

Thank you very much Benny!

Here's a link to that dutch oven at Amazon, with a tag to give Webmaster Floyd a commission:

Thank you very much for posting the link!! That's cool that Floyd could get a commission too!

I have no regrets with buying this thing. And since it is so big, it gives me a good excuse to put in a new kitchen so that I have somewhere to store it.

Sue, Here's the link you gave me to a banneton sized for baking on the lid of this dutch oven, again, tagged for Floyd's commission:

Here's a less-expensive banneton that I purchased, 11.25" inner-diameter (at top) and 11.8" outer-diameter:

Sue, just came across this and it looks great.  Did you post he recipe or can you point me to the one you used.