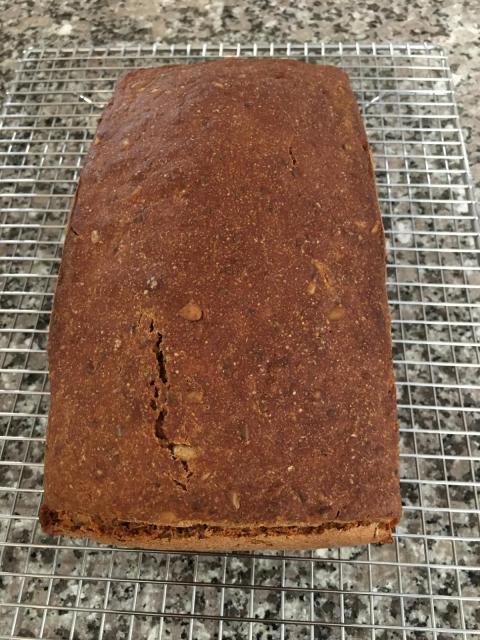 Inspired by one of Ilya's recent posts about a rye bread, I decided to try a recipe from Maurizio Leo's site (The Perfect Loaf) for a rye bread with some seeds.  The night before the bake I prepared the levain, which consists of mature starter (47 g), rye flour (234 g of King Arthur White Rye Flour), and water (234 g).  At the same time I put roasted unsalted sunflower seeds (65 g), roasted unsalted pumpkin seeds (65 g), and whole flaxseed (30 g) in a bowl and added enough hot tap water (214 g) to submerge the seeds.  Both the levain and the soaker were covered with plastic wrap and left on the counter overnight.

The next morning the levain had tripled after about twelve hours.  First I put water (322 g) into a large bowl and added the levain, which I stirred until it dissolved.  To that I added dark rye flour (176 g), spelt flour (176 g), sea salt (12 g), and the soaker (after draining through a mesh sieve).  I used a dough scraper to mix everything, which had the consistency of cake batter, took the temperature (75 F), and then covered the bowl and let it sit for a half hour.

Maurizio used a Pullman loaf pan in his bake, but I don't have one of those and instead used a 9"x5"x3" loaf pan, which I sprayed lightly with oil.  Using a spatula, I then scooped the dough into the loaf pan, smoothed the top, and covered the pan with plastic wrap for the proofing.  After ninety minutes the dough had risen to about a half inch below the rim, and I then put the loaf into a 400 F oven that had been steamed in my usual way (lava rocks in aluminum pie pans).

After thirty-five minutes I reduced the oven temperature to 350 F and then continued the bake for another ninety minutes.  In the meantime the loaf rose nicely and took on a dark brown color.  A crack formed around the upper perimeter just below the top crust (something Maurizio mentioned in his description of the recipe), but was more cosmetic than anything else.  By the end of the bake the internal temperature of the loaf was 209 F.  I put the pan on a cooling rack for a little over an hour and then removed the loaf, which I weighed (1215 g) and then wrapped in a tea towel and left on the counter.

Maurizio says to leave the loaf wrapped for 24-48 hours to avoid having a gummy crumb from slicing too early.  I opted for about twenty-five hours and then curiosity got the better of me.  Here is the loaf after being unwrapped. 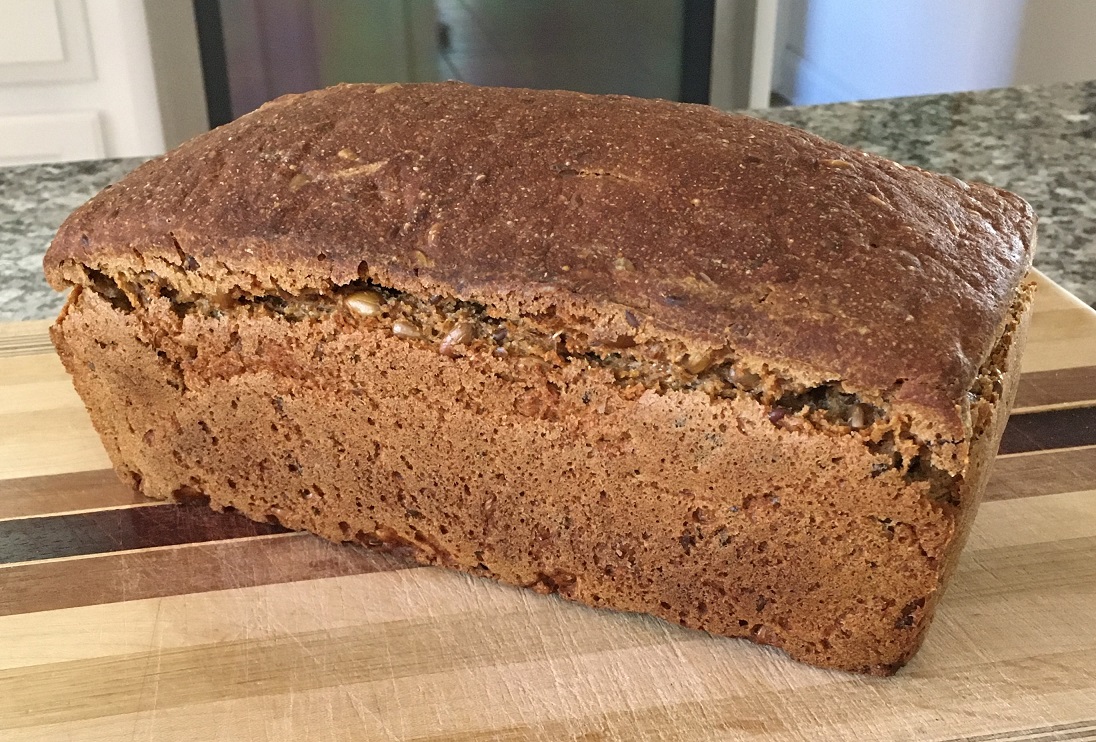 Here are two photos of the crumb. 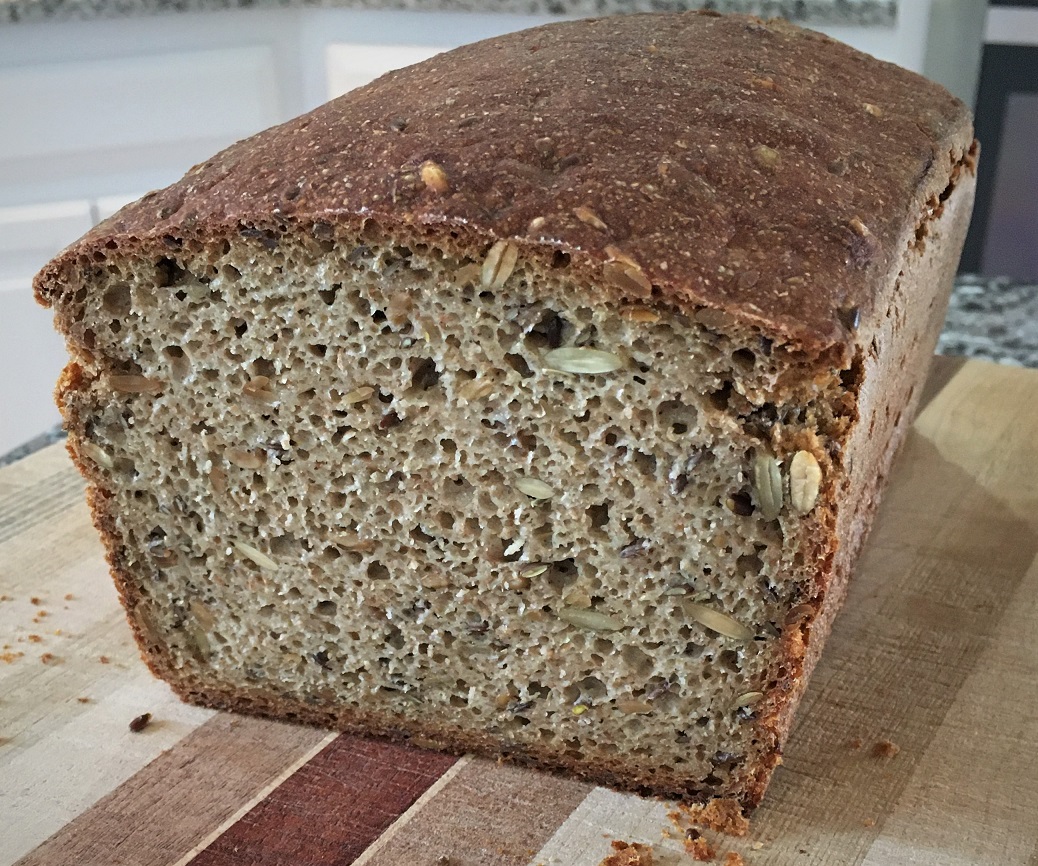 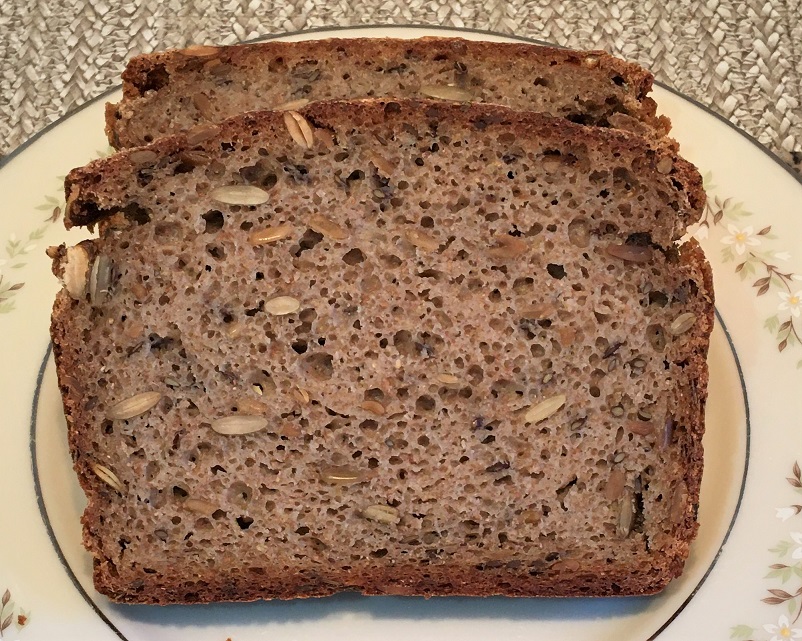 The bread has a crisp crust and is easily sliced.  The crumb is moist but not gummy.  The seeds provide a nice addition to the flavor of the three different flours.

This is an extremely simple bread to make and offers a lot of flexibility.  You could vary the types of flours and types of seeds and really play around with the possibilities.  The presence of white rye and spelt makes the crumb lighter than a totally dark rye bread and is not dense at all.  Consider this bread if you are looking for something that combines rye and seeds.

That is an excellent crumb, the bread looks great! Well done! Good amount of seeds, and very light.

I always forget what that crack on top means, it's a very common issue with rye bread baked in a tin... Maybe someone will comment.

The crumb has a nice texture, and the mix of seeds works well.  Thanks for posting your rye bread, which led to my baking this bread.

It's obviously well proofed and yet there's the large crack all around the top. I bet you could make it go away by reducing the hydration a bit. Maurizio seems to have baked his with the lid on, so he got large alveoli in the middle and compressed sides instead. Drop it to 90% and see what happens maybe?

The proofing was simple and involved nothing more than watching the dough rise in the pan.  The real question I had was total baking time, which was a guess in part (but I followed Maurizio's timeline and took the internal temperature to confirm doneness).  As for the crack, it is entirely cosmetic and has no impact on the taste (and is hardly visible with a slice).  I would probably leave the hydration as is.

Now that looks like a hearty tasty loaf Ted.  How do you like the flavour of it?

The taste is very nice.  Definitely a rye bread (and not wheat), but a lighter flavor.  The seeds add a nice aspect to the chew.  It is such a quick and simple bread to make that you should give it a go.

The baking times look incredibly long. Are they right?

Yes, the times are correct.  Thirty-five minutes at 400 F and then reduced to 350 F for another ninety minutes.  Rye bread takes awhile to bake.

Thanks for taking the time to read the posting.  Happy baking.

I did not and it got too hard on top.  Should the baker be covered for all or part of the time?

I do not have a Pullman pan and opted to bake in an uncovered pan.  The top did get pretty crispy.  I liked it, but my wife did not.  Perhaps spraying the dough with water during the early stages of the bake would soften the top, but after awhile the top is probably going to harden anyway (and I did steam the oven).  In lieu of a Pullman cover, an aluminum tent might reduce the crispness.