I've been jonesing for a rye bread, so when my most recent bread (a yeasted 100% whole wheat bread with tangzhong) developed mold before the loaf was half-eaten, I seized the opportunity.

The first order of business was to pull my starter out of the refrigerator and give it a good feeding.  Although I have tended it, the poor thing has been in cold storage about a month and a half since it's last use.  Happily for me, it perked right up and was ready for use with just one refresh.  (Although not germane to the bread that is the subject of this post, we took delivery in April of the refrigerator and freezer pair that we ordered in February.  That's received in April 2021, ordered in February 2020.  Yes, more than a year later.  Thank you Electrolux/Frigidaire for getting right on that.)

Early that evening, I mixed both the levain and the soaker.  The levain went into my Brod & Taylor proofer overnight.  My one deviation from the recipe was to mill the flour for the soaker at a coarser setting and then use boiling water, rather than room temperature water, to hydrate it.  The soaker was then covered and allowed to cool overnight.

The next morning, about 7:30 or so, the levain was puffy and well aerated, so I went ahead with the final dough.  The KitchenAid mixer made short work of combining everything, following the recipe's directions for mixing times.  The dough went back into the proofer for the short 30-minute bulk fermentation.

Hamelman's instructions talk about shaping the dough and proofing it in baskets for either round or oblong loaves.  But then, almost as a aside, he mentions that it works well in Pullman pans, too.  After checking on the amount of dough that he recommends for a 13x3.5x3.5 pan and scaling for my 9x4x4 pan, I found that the amount of the dough in the recipe would work perfectly for my pan.  Consequently, at the end of bulk fermentation, I shaped a single loaf and packed it into the pan, using wet hands to dome the top of the loaf.  Then I put it back into the proofer for final fermentation.

When I came back to check on the fermentation progress, I was surprised and rather concerned to see that it was at full proof and needed to go into the oven.  Just one small problem: the oven wasn't preheated yet.  Two, actually: it was also apparent that the lid wasn't going on the Pullman pan, since the dough was crested slightly above the rim already.  After re-reading the baking instructions, and checking another recipe that was specifically written to use Pullman pans, I elected to adhere (mostly) to the instructions for this bread.  There's an initial 10-minute bake at 470ºF.  Then the temperature is turned down to 430ºF for ____ minutes, depending on loaf size.  Between the directions for the two recipes, I guesstimated that 50 minutes at the lower temperature should get me pretty close. 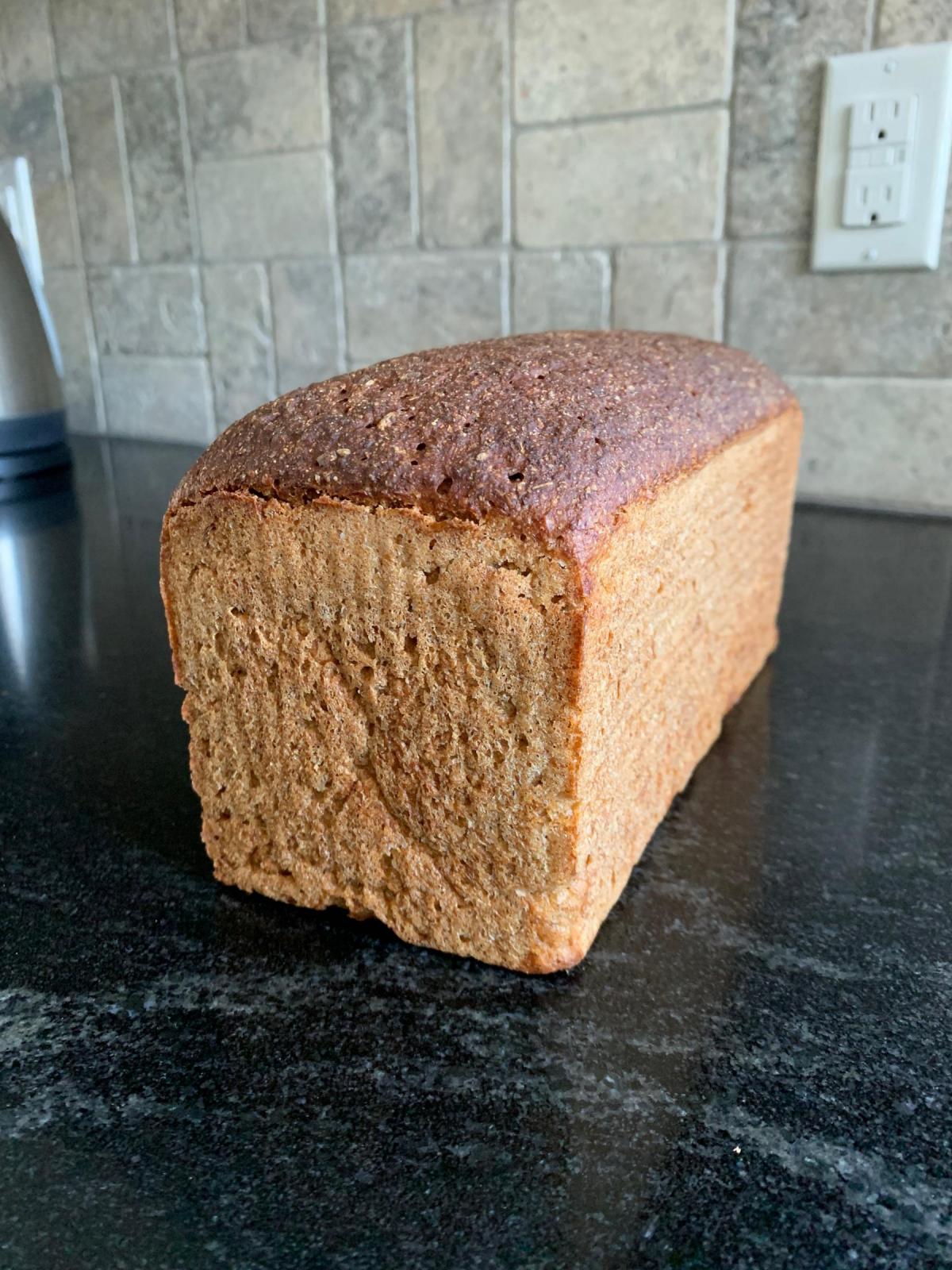 To illustrate just how close to the edge of the over-proofing cliff I was, take a look at all of the pinholes in the top crust where bubbles were beginning to pop: 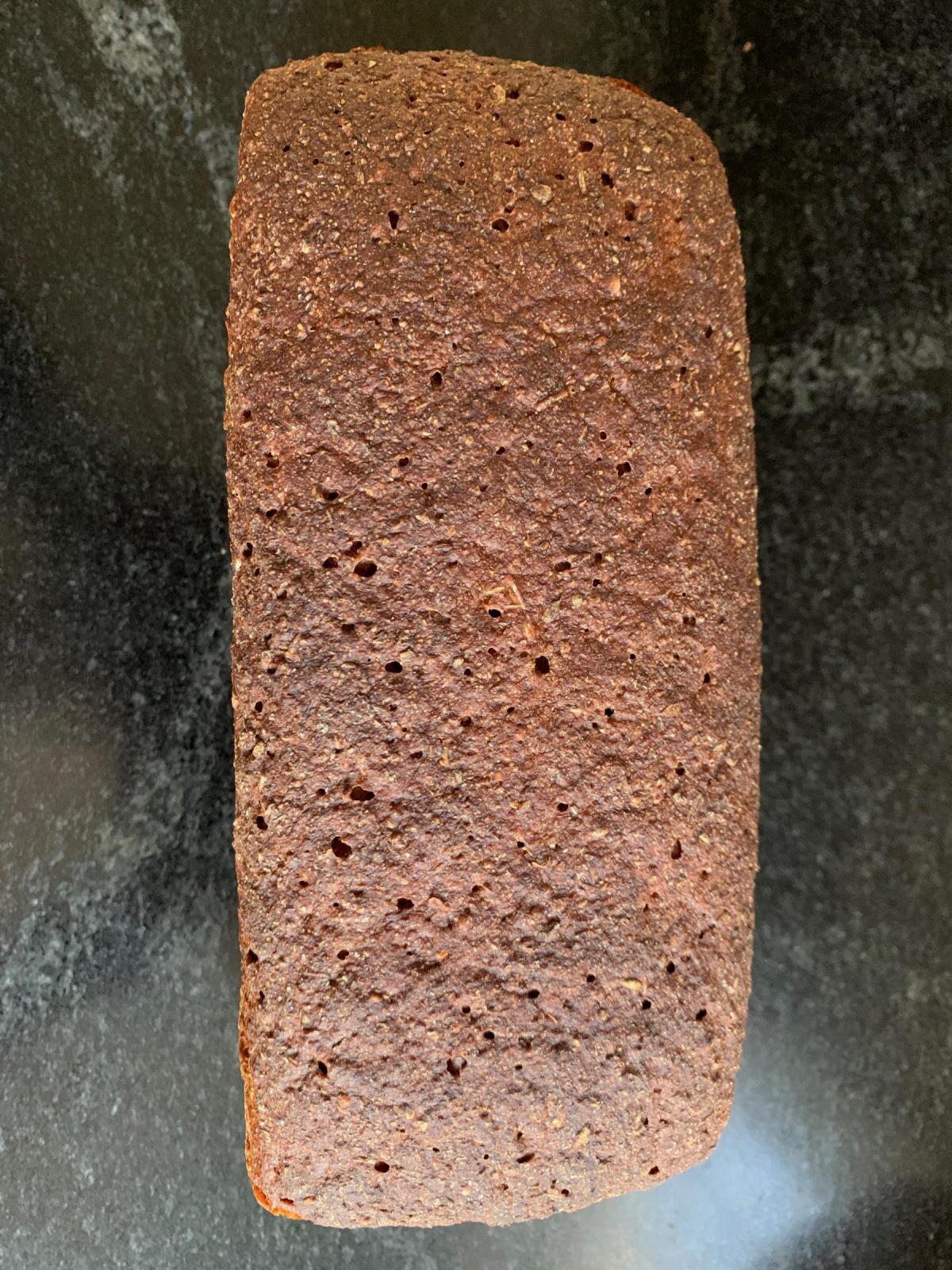 Luckily, there isn't a flying roof, nor has the top crust sunk after cooling.  The crumb shows some compression zones around the pan sides and bottom but I think these are more a product of the final expansion of the loaf's center during the bake, rather than overproofing tells. 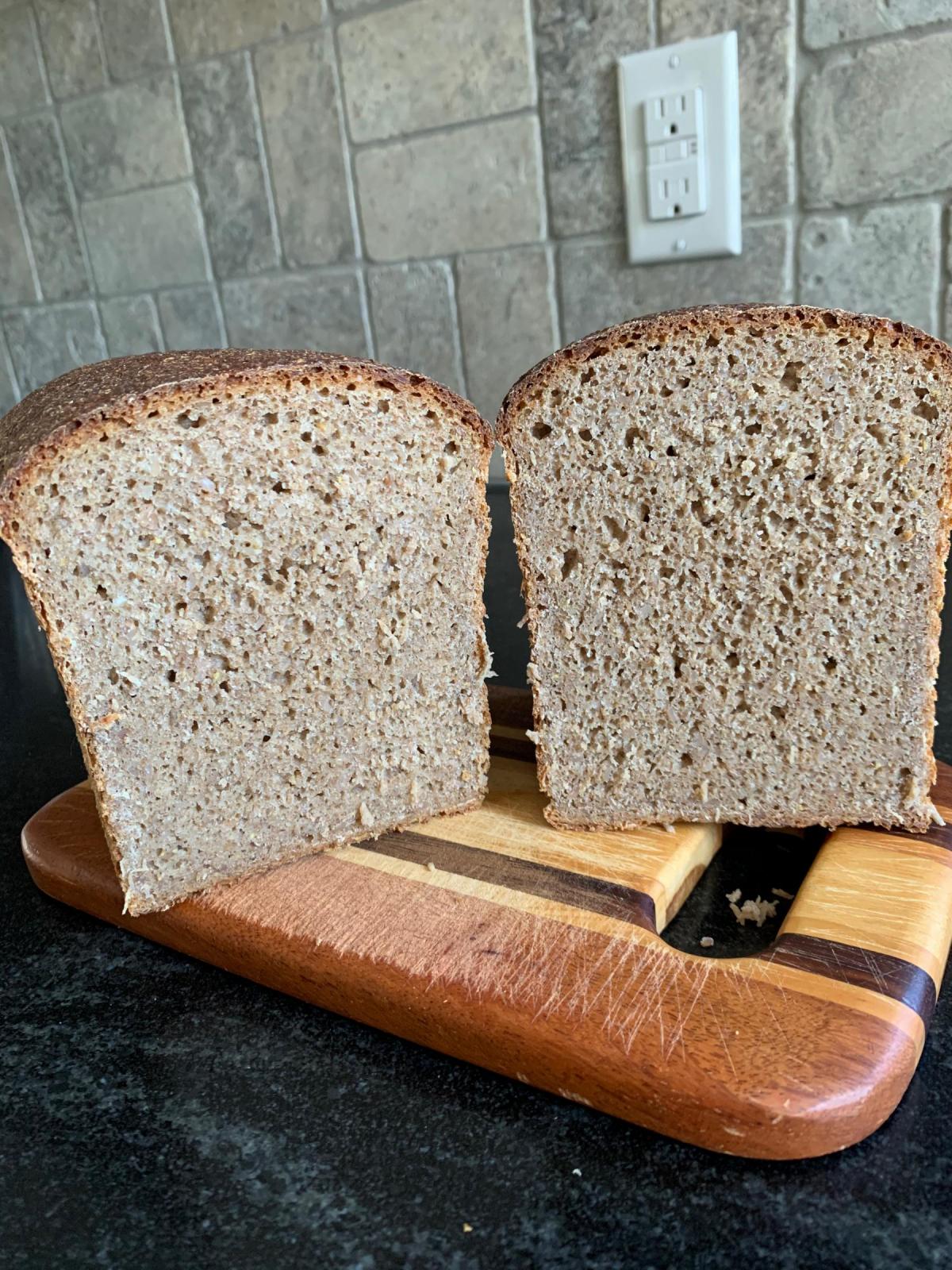 For an 80% rye, the crumb looks pretty good.  It is very moist but doesn't coat the knife blade, some 30 hours after coming out of the oven.

The flavor is surprisingly mild; just a faint hint of sourness and the earthy/spicy notes that I associate with rye.  There are no seeds or spices, so all of the flavor comes from the flour.

To avoid a rerun of mold before I can use up the bread, I've cut the loaf in three pieces.  Two are in the freezer, one is in the pantry.

It looks great Paul, yes it must have been just on the edge of overproofing with those pin holes on the surface.  But the crumb is perfect in the end, well baked.

may have made the difference between teetering on the brink and too far gone.  However it happened, I'm grateful that the bread turned out well in spite of having let it get so close to the edge.

one of my favorite breads and one of the very best breads overall.  Yours looks grand!

But it didn't go so far as disaster.

The bread is a good one, which seems to be the case with all of Mr. Hamelman's offerings.

Good to see that you are still above ground and posting again.

Do you have the 2nd edition of Hamelman? My first edition makes no mention of the pans. How much dough did you use for the 9x4x4 loaf pan? And did you leave a baking stone in the oven for the pan to sit on? The last time I made a pan loaf I found that by sitting it on the stone the sides of the loaf had much better color, like yours, compared to not using a stone. Just curious...

if I can say so without being immodest.

Yes, this is from the second edition of Bread.  The last sentence of the introductory paragraph for this bread says "It also makes a delicious pullman loaf, using about 4.5 pounds of dough for a 13 by 3.75 by 3.75 inch pan."  When I scaled it out for a 9x4x4 pan, that came to 3.5 pounds.  Since the Home version of the formula yields 3 lb, 9.8 oz, I used that without any adjustments  As I noted in the post, that quantity of dough actually crested higher than the pan's rim; probably 1/2 inch pre-bake and 3/4 inch post-bake.  That would seem to suggest that the 3.5 lb weight is the upper limit for the 9x4x4 pan with a lid, without making the loaf too dense.  An ounce or two less than that might be preferable.

No stone was used for this bake.