I guess I was due a pancake (almost)! Wanted to keep exploring the sourdough poolish idea after delicious (although ugly) ciabattas.

Decided to make a seeded sourdough with ~40% whole grain and a soaker, and made a preferment with all the whole grain in the recipe: https://fgbc.dk/1h9s

Probably overfermented the dough: flattened after scoring, and at the same time as I slashed the second loaf I noticed the skin was tearing in some places already, so I just shouldn't have scored it, and would have been much better, probably. Not used to such quick fermentation I guess! A lot of whole grain, and a very large inoculation. 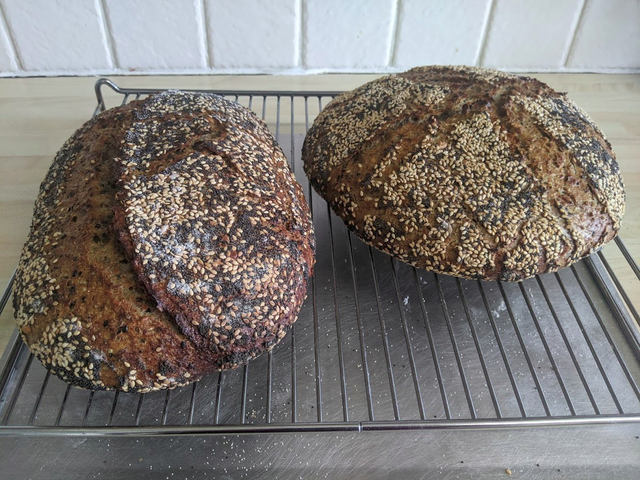 Hopefully, it's at least tasty :) Will see when it cools.

Not much point in posting the crumb I think, it's not dense and quite good. What's more important, it's actually really tasty!

You should post the crumb Ilya.  Overproofed crumb is usually still quite good looking and usually very tasty as you’ve already said.  High inoculations for high wholegrain dough really do proof quickly so make it really easy to overproof as I have found out with my 100% bakes lately.

Ok no probs Benny if you are curious. It does taste delicious, I think I got a good seed combination in there. Also coated in regular sesame and poppy seeds, forgot to mention.

Yes very nice Ilya, love the combination of seeds and that is a nice crumb so it must taste really great.  Will you bake this again with less fermentation and/or less prefermented flour?

I think I might! I really want to explore the high % PFF. I think I'll stick with around 40% PFF 100% hydration preferment, trying different formulas. So far I tried it twice, and the breads were not much to look at, but delicious. So I want to nail it.

Perhaps next time I'll just try some white flour bread, to maximize the chances for success. The crumb I got in the ciabattas a few days ago was spot on, and the dough was exceptionally strong in the end, so nice to handle. I think I'll try the same formula with less fermentation, and as baguettes maybe. This bread will last some time though, I don't usually give away ones that don't look good, so we'll have to go through both loaves ourselves :)

I think they are pretty good and look tasty. Have you considered scoring with a serrated knife for seeded loaves?

Re the look - I think the photo is too flattering to the loaves, they are really quite flat. But thanks :) taste is not compromised.

I usually retard for final proof, and then even densely seeded surface is easy to score with a lame. With warm proofed bread it is less easy. Do you think scoring with a serrated knife works better then? I only have a bread knife with rather large teeth though, would that work?

I use a steak knife to score seeded loaves. I think the bread knife would work ok.