Acid weakens gluten, breaks it down, makes gluten more extensible, less resistant to gas pressure and that is one of the reasons why sourdough loaves have higher volume - their gluten stretches, expands more due to their acidity.

"Clear answers (to your questions) on the internet" are found here

Yes everything Mariana said is true, at least my understanding as well, however, initially before the pH gets below 4 or so the acid still tighten the gluten and make it stronger.  Once the pH gets much below 4, proteolytic enzymes in the flour will become more active and break down the gluten.  So if your dough gets too acidic, like when you overproof/overferment your dough, you’ll see evidence of this gluten breakdown in your crumb.

Do you think that long cold fermentation with commercial yeast pose any trouble when it comes to lowering acidity? Or same situation but with starter instead of yeast? So given this information its best to avoid long fermentation with weak gluten flours?

Even commercial yeast fermentation results in some acid production that can lead to proteolysis and gluten breakdown given a long enough fermentation.  The situation is just exacerbated in sourdough baking because of the LAB that produce a lot of acid.  Yes I do think that with a soft flour the issue would be even more pronounced since it is starting off with a handicap.

for my two larger batches that I bake once a week.

I make the levain in the morning with a high inoculation and for my first batch in my spiral mixer I use the levain when it is ph 4.o ish and then approx. an hour later I use the same levain but by then it has ph 3.8.  One thing I noticed like Benny has said that more acidicy does actually strengthen the gluten at that ph.and it is not necessarily negative.....visually ph 3.8 is for my 100% hydration starter now when it is about to drop or has just dropped with severe dimples...

It means though that I will have a bit less time potentially for my bulk as the ph is going to decrease faster meaning the dough has more acidity than the other from  the start... However, as I mix in spiral mixer and develop my gluten more or less upfront I still have enough time to get plenty of dough structure and air in my dough before it hits the tricky region of ph 4.5 when the gluten starts to be affected by protease enzyne and pentosans..and best to start to divide dough around that region (with the caveat that also depends a bit on your flour).

So yes your dough will start at a higher ph and gets more acidic throughout bulk.

This arcticle helped me quite a bit... https://bread.blog/enzymes-and-ph-matter-troubleshoot-my-loaf/

You don't need to have a ph meter but understanding timing wise what enzymes are active at what stage and how this affects your dough can be helpful. I think from various sources there seems to be an anxiety about the 'too sour' an starter or levain. I am certainly was a bit paranoid at times...now I realize that what I thought was too much it actually ok and gives my dough often some nice strength...

Might be worthwhile to use the same levain young and older for the same dough and see what difference you notice?

I did this again today with my potato and poppyseed loaves...  Happy baking..Kat

So going below 4,5 pH starts to degrade gluten? I guess the process is slow? Even few hours of bulk below that pH won't affect gluten that much, but give much needed structure and gas in the dough?

The flour’s proteolytic enzymes really become activated when the pH falls below 4.

There are several proteolytic enzymes of note, although the proteolytic breakdown we bakers observe at low pH / high acidity are certainly the Aspartic ones.

Thank you for this information Michael, it is very helpful to understand what is happening as the pH drops.

The proteinases listed under germinated wheat grain then are they ones that we might see only in sprouted flours?

The Serine carboxypeptidase II which is active between 4-6, this doesn’t cause any gluten breakdown?  Or does it possibly explain the effects of increased extensibility that one is supposed to see when using an autolyse?

I appreciate your time in sharing this information.

Proteinases (Endopeptidases) can break peptide bonds at random sites along a polypeptide chain to form smaller peptides. These chains feature amino (N) and carboxyl (C) terminals and the carboxypeptidases (Exopeptidase) operates only at the carboxyl ends of polypeptides, and liberates singular amino acids.

Free amino acids (FAA) in bread dough are important as they act as precursors to aromatic compounds developed during baking. Greater levels of FAA likely leads to more aromatic and more flavourful bread.

Germination in the field is a natural phenomena (search "preharvest germination"). And so depending on the quality, varying levels of the enzymes listed under "germinated wheat" can be present in sound flour. Evidence suggests Cysteine proteases are the most present in flour and so these would be most responsible for any proteolytic action that occurs in an autolyse stage.

Rainfall and humid weather before harvest will increase the chance of preharvest germination. This being the case certain European wheat and especially UK wheat is naturally richer in enzymes and are generally not supplemented as the natural level is high enough. While North American wheat grown in hot and dry climates are however low in enzymes (little to no preharvest germination) and supplementation with malted barley has been standard since time immemorial.

Regarding autolyse and its functionality, beside enzymes there may be other mechanisms at work. Not invoking mechanical work (developing, kneading) the dough upfront, less bonds are created and gluten fractions remain in smaller pieces. It is said these smaller polypeptides are more soluble and more susceptible to enzymatic attack.

Thank you again Michael for your contribution to my knowledge, this is all great to know.

but I will try to learn bit by bit...and thank you for sharing Michael. I probably need this more like 'sesame street' type science...

I am interested in particular in amino acids also from getting a good colour on my loaves...pov and the flavour as you mentioned.

A friend of mind uses a local flour in Southern France and I think suffers a lot from the germination and enzyme activity as it seems with his flour. I told him to ask for the 'falling numbers' of his local mill.

Interestingly, with my local white UK flour atm it seems not very enzyme rich and I noticed that  using freshly milled flours made a big difference...ah..so much to learn... Kat

Wow..Michael... this is for the first time I see this level of detail...and must digest tbh...

I guess, for me it was interesting to see Thomas' video useful EIDB video on gluten degradation https://www.youtube.com/watch?v=vsCpdCsJFr4  and how he shows at what ph level the dough changes appearance as the ph goes down. Especially once you reach that critical below 4.5 ph area which then affects when to decide to divide the dough, when to shape as well as fridge temp to plan target ph for baking..

I am totally intrigued about the dough rheology element of this... and timing fridge temps to get a 'creamy' crumb where some gluten degradation has happened and in fact it aimed for...if that makes sense...

That's a nice video. All of Thomas' videos are very informative.

He mostly describes the oxidation and reduction of sides chains formed by disulphide bonds. This is a separate mechanism to the low pH (aspartic) proteases. But as Giorilli says, in the reduced form where no side chain is present, protease enzymes can now act at this site.

Thanks for the video, fascinating. I need to learn more about pH and dough. 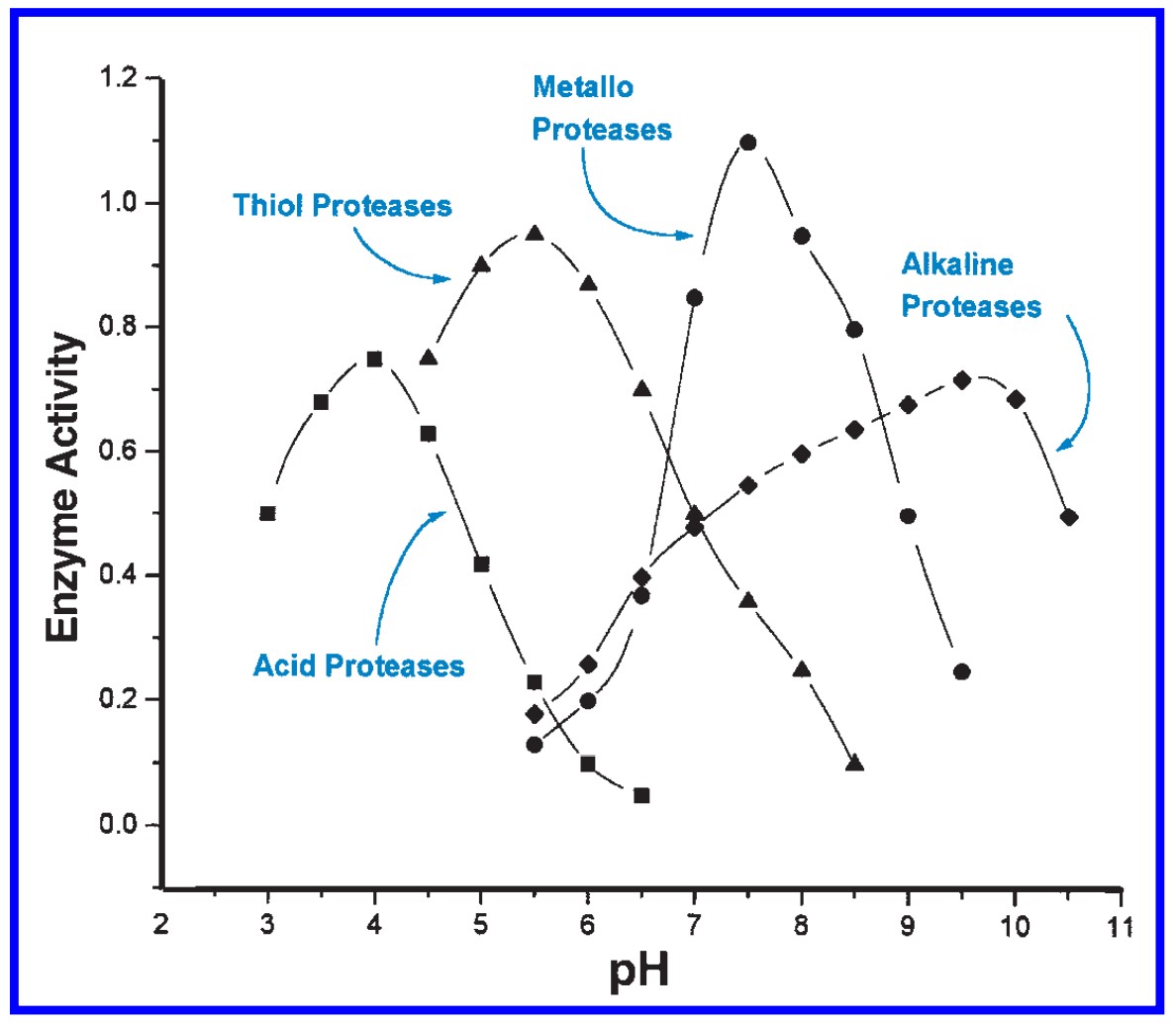 Correlates with the above. Thiol / Sulfhydryl / Cysteine protease. If present we can expect them to work in an autolyse.

That's a very nice all-in-one primer page.  Thanks for sharing it.

Nice graph, would be nice to also know what concentration of each enzyme there is per 100g of flour. Looking at this graph, without this crucial data is kinda pointless, because as we can see enzymes are present at pretty much every pH, so another determining factor is concentration. With this graph plus concentration we can get full picture.