Inspired from Jasons Quick Ciabatta, (I've made dozens and dozens of times), I started experimenting with my discard. I've made Ciabatta using Peter Reinharts Biga, Poolish, Jasons Quick Ciabatta, to name a few. Jasons is nice because it's quick, but lacks flavor. Peters is nice because it nails the flavor but takes much time. (Something that's not available to me anymore) This is the best of both worlds.

When time ran short, I still maintained a twice a day feeding schedule of The Darwin Starter, but was unable to use him proper and consequently, my discard started to get out of control. Thinking about Peters Poolish/Biga, I dumped 200 grams of Darwin into my mixing bowl, knocked off 100 grams each of flour and water from Jasons Ciabatta and used warm water to offset the chill from The Darwin.

Mixing The Darwin, flour and yeast with a plastic bowl scraper then slowly incorporating the water, letting it autolyse for 15 minutes, adding the salt then aggressively mixing it, has proved to be the most efficient way for me to make this. It took 10 minutes of mixing with the paddle on 6, then another 2 minutes with the dough hook on 6 to have it ready to proof. This is where you need to be patient. I don't go so much by double or triple as I'm using a bowl and can't tell how much it's risen. What I do look for is a big,bubbly mess of slop that almost looks alive in the bowl. At this point The fun begins.

There is no "Iron Fist Velvet Glove" phase in this bake as frankly, I have no desire to fondle this mess. I don't want to Degas the dough. So I use a bench knife to shape and after a 45 minute rise, I place parchment paper next to the loaf and use my bench knives to "flip" the dough on the parchment paper. Slide my peeler under the paper, load it on the steel and 20 minutes later, it's done.

From start to finish is between 4-5 hours and is without a doubt the best tasting ciabatta I've ever had, let alone made. Think lazy mans Poolish. (or time challenged)

1. In mixer bowl, add discard, flour and yeast. Lightly mix discard and flour with a spoon until discard is well mixed in. 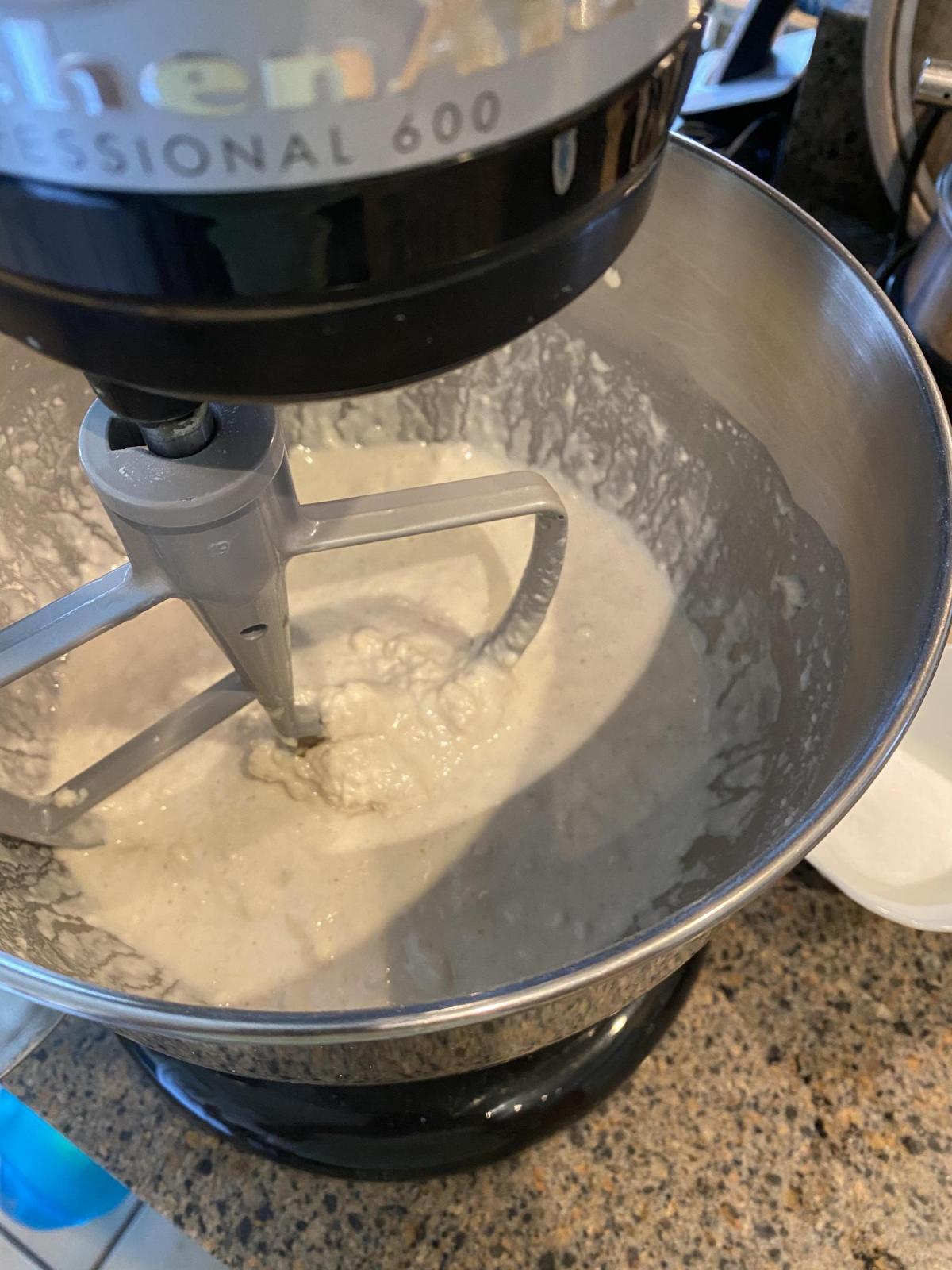 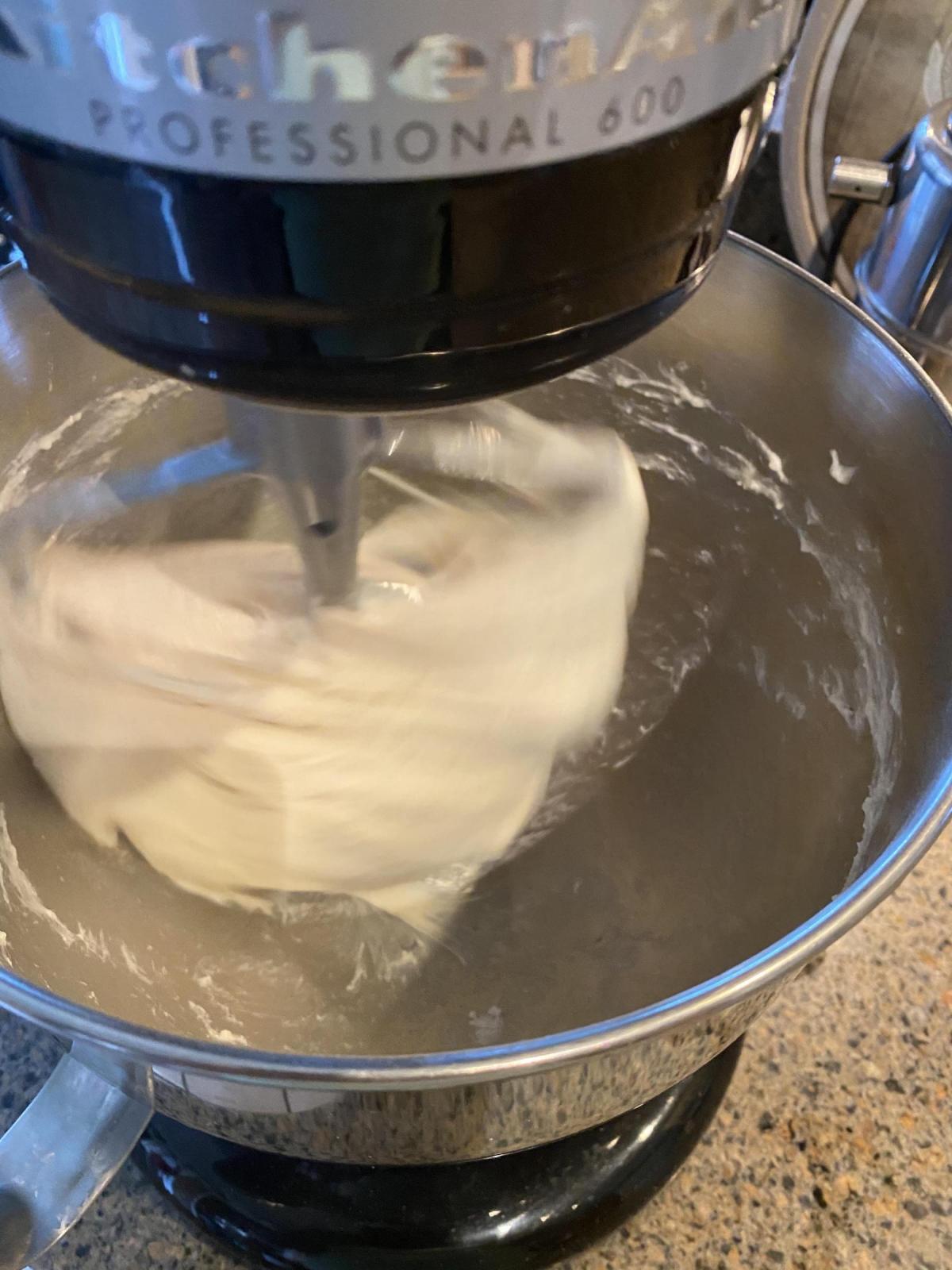 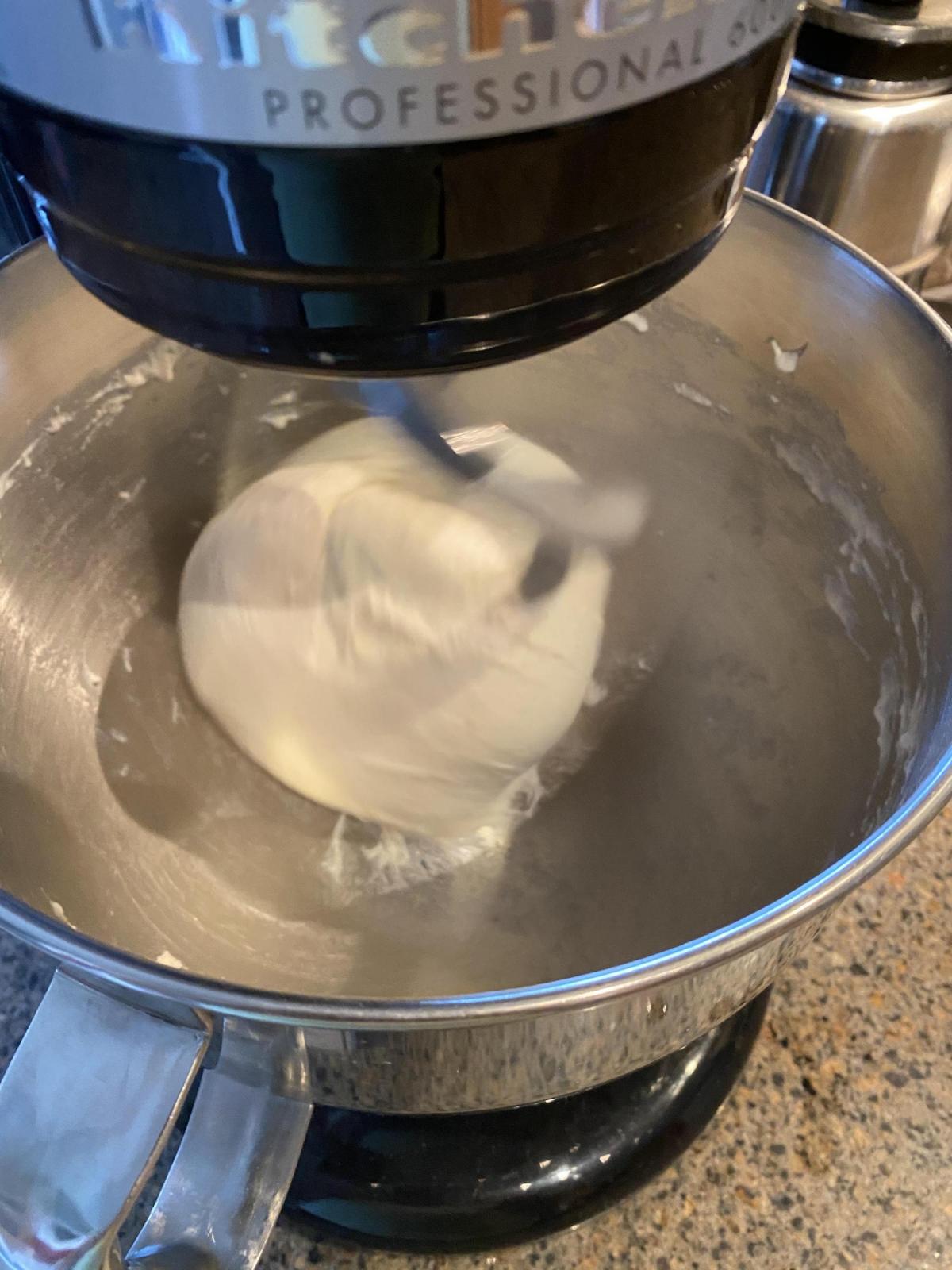 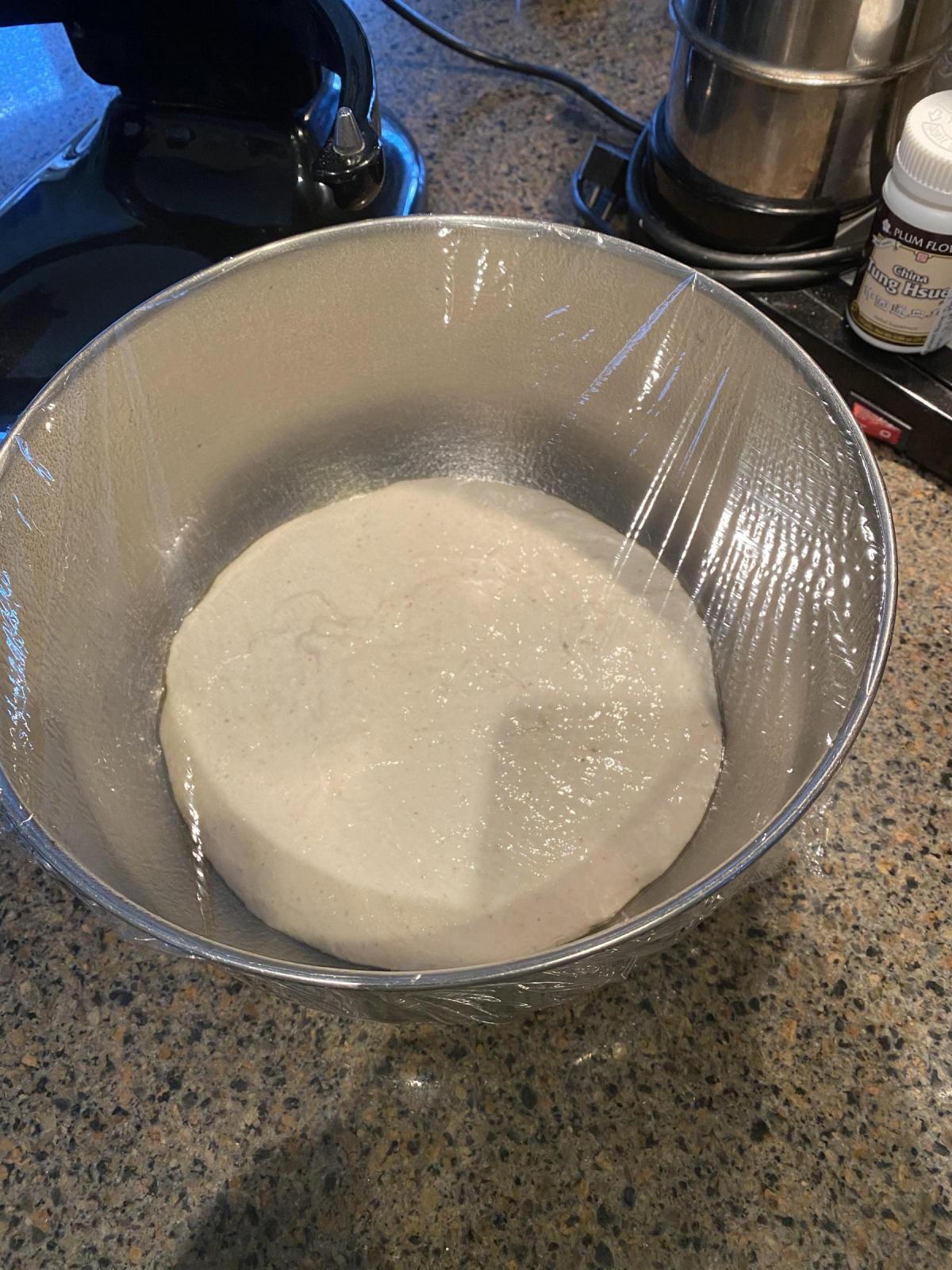 5. After roughly 2.5 hours or when your dough looks like it's alive, 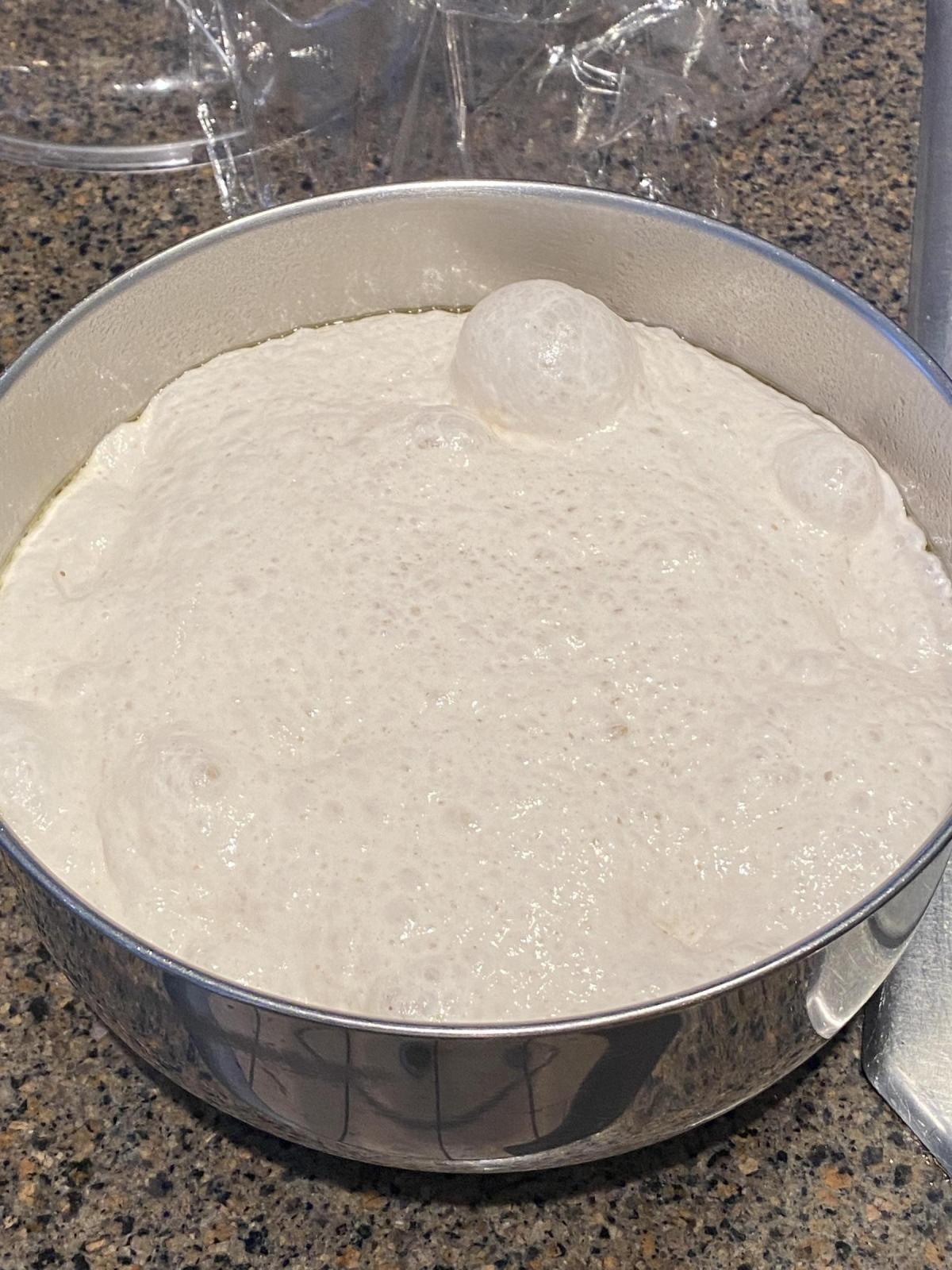 Pour this living thing onto a well floured surface, being careful not to de-gas it.

Divide into 2 pieces and shape with an oiled bench knife. There is no need to touch the dough with your hands, simply split the dough and shape it using the bench knife into two loafs. (or 4 smaller loafs) 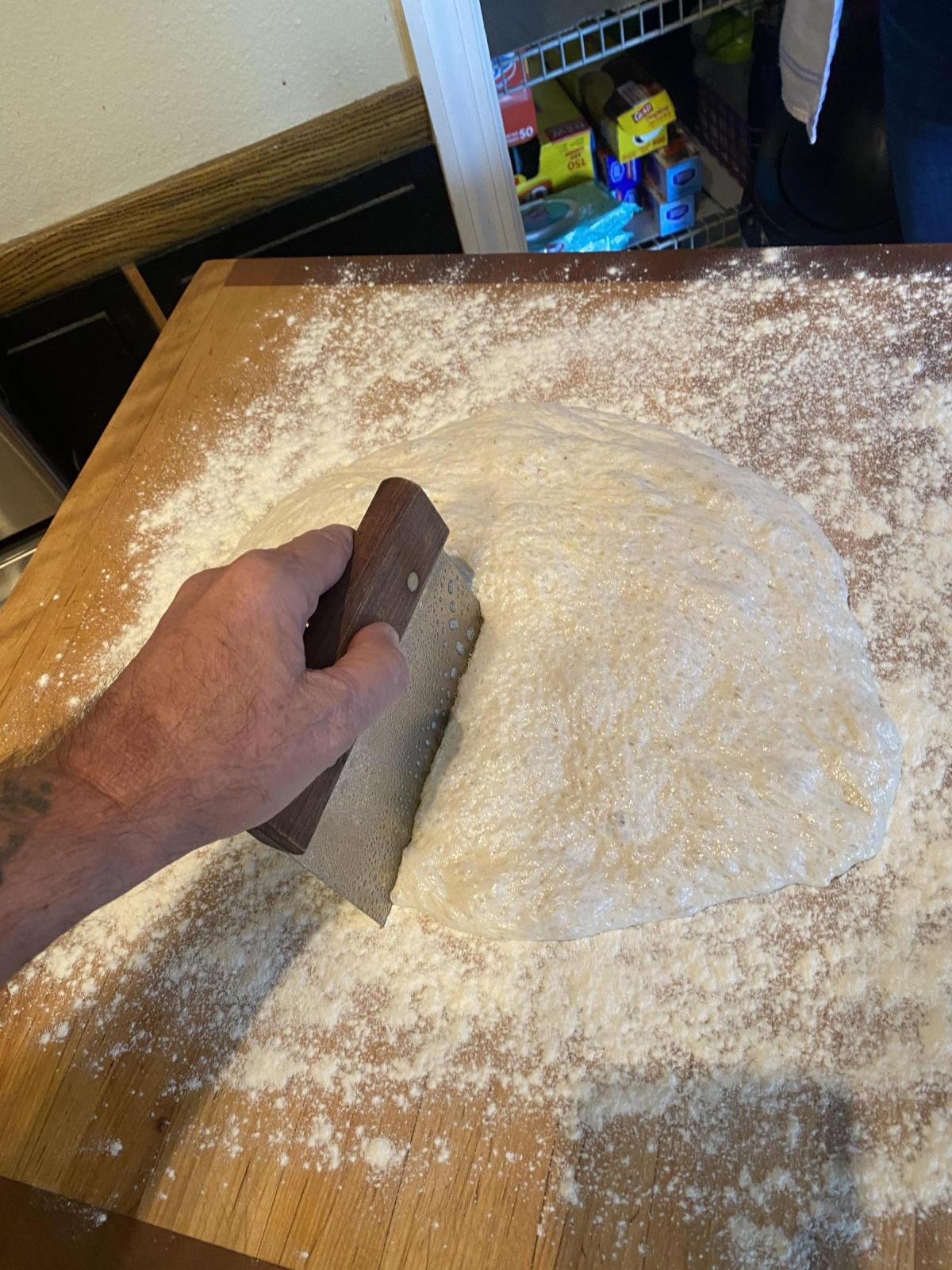 Scrape the excess flour up under the loafs, 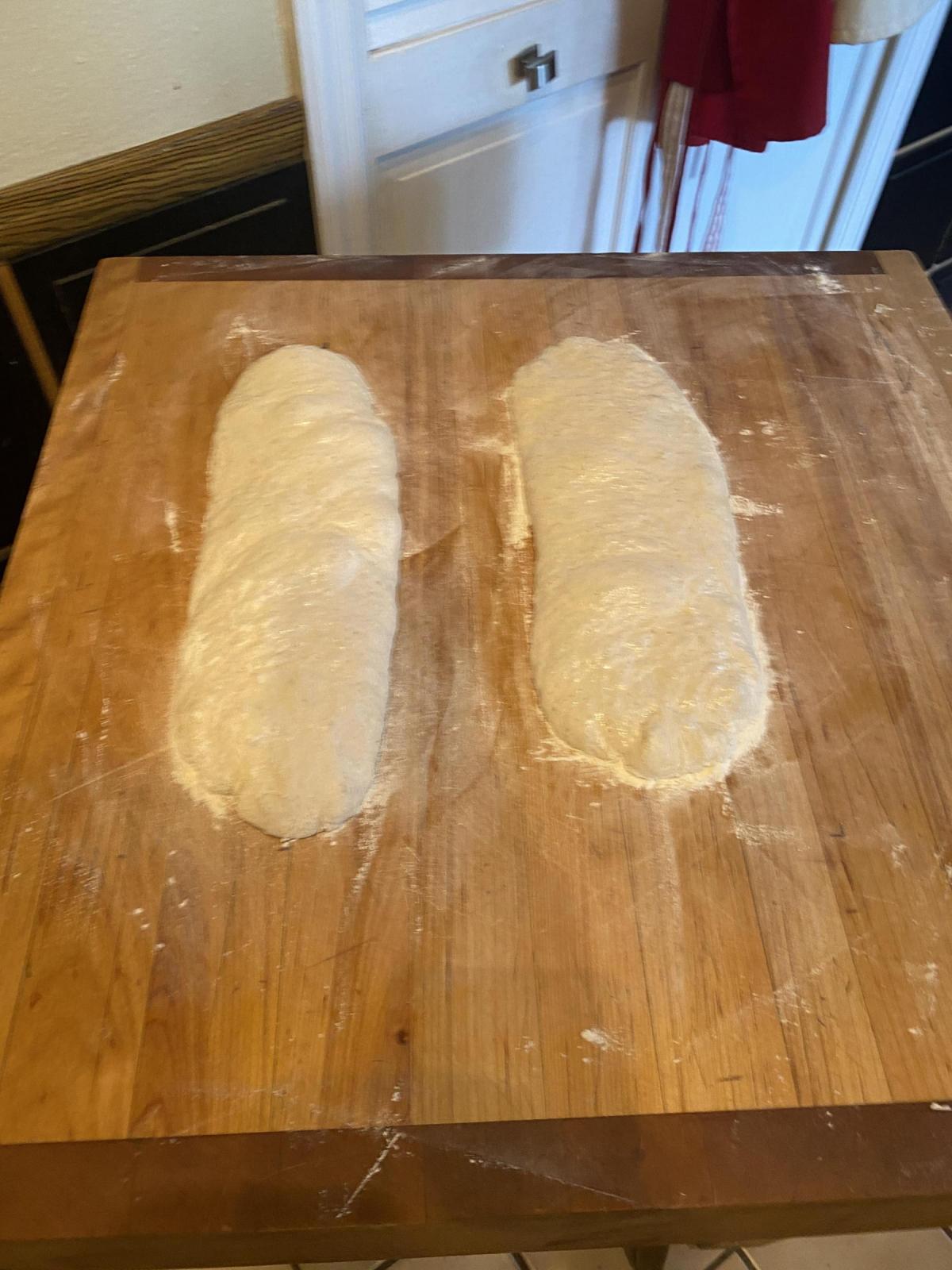 flour the loafs well and cover loosely for about 45 minutes.

6. In the meantime, setup your oven with a steam pan or two and your steel/stone and preheat as high as it will go. Mine preheats to 550 for 45 min - 1 hr. 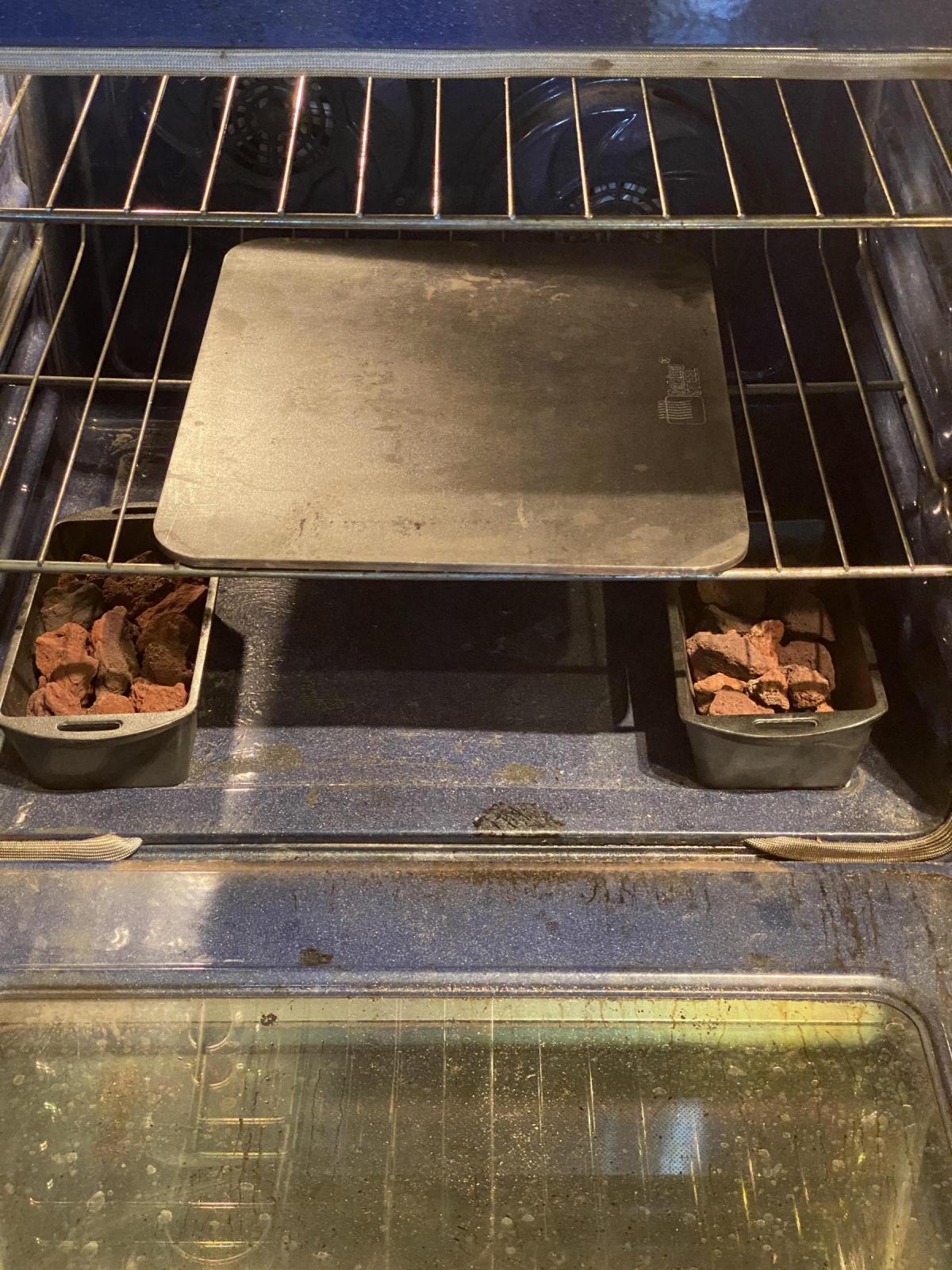 7. Sprinkle Corn Meal or Semolina on the top of the loafs and using a couple of Bench Knifes, flip the loafs onto some Parchment paper. (The top is now the  bottom) Gently reshape the loafs by pressing and dragging the bench knife alongside the loafs) 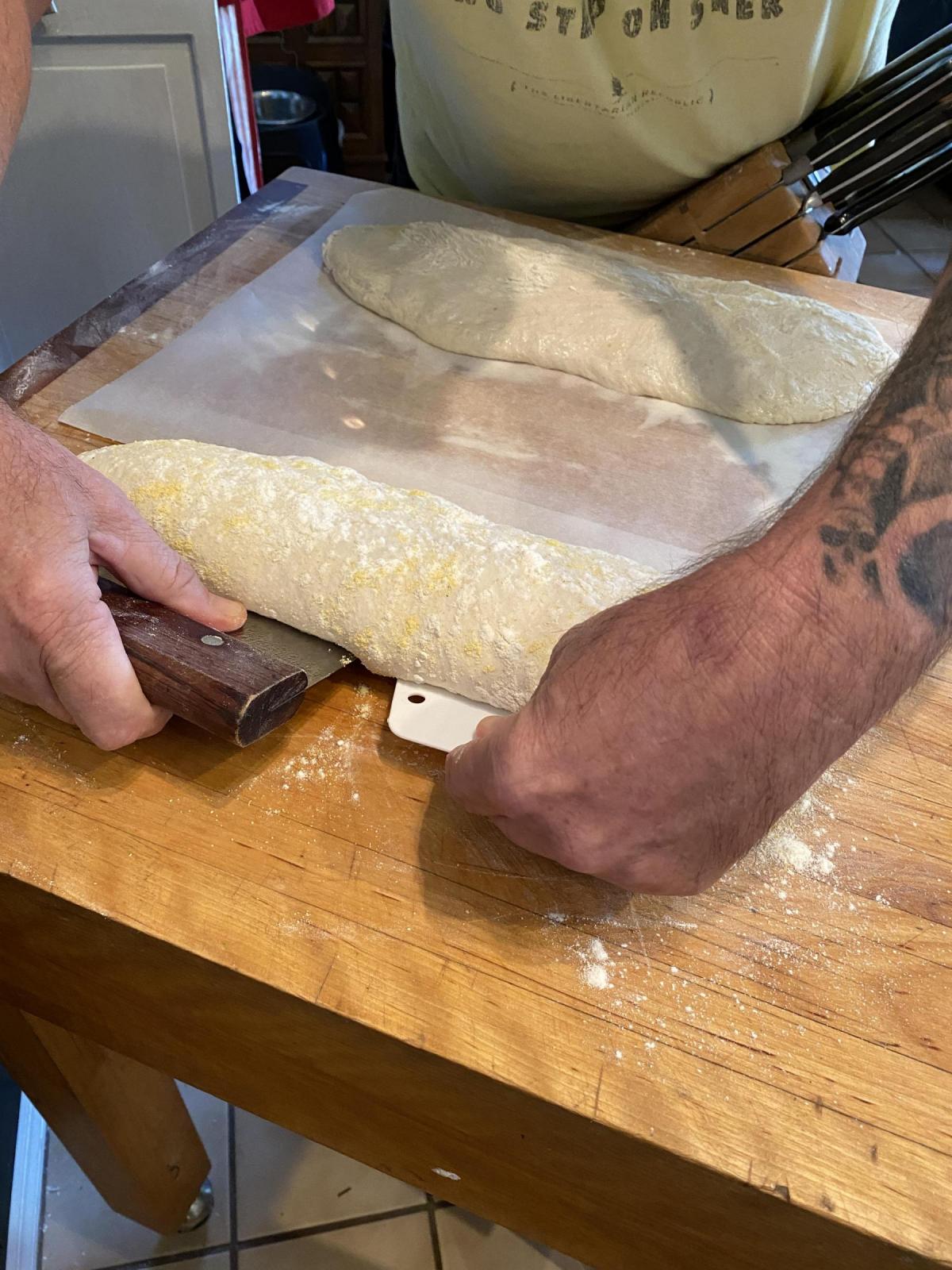 Load the loafs onto your Peel 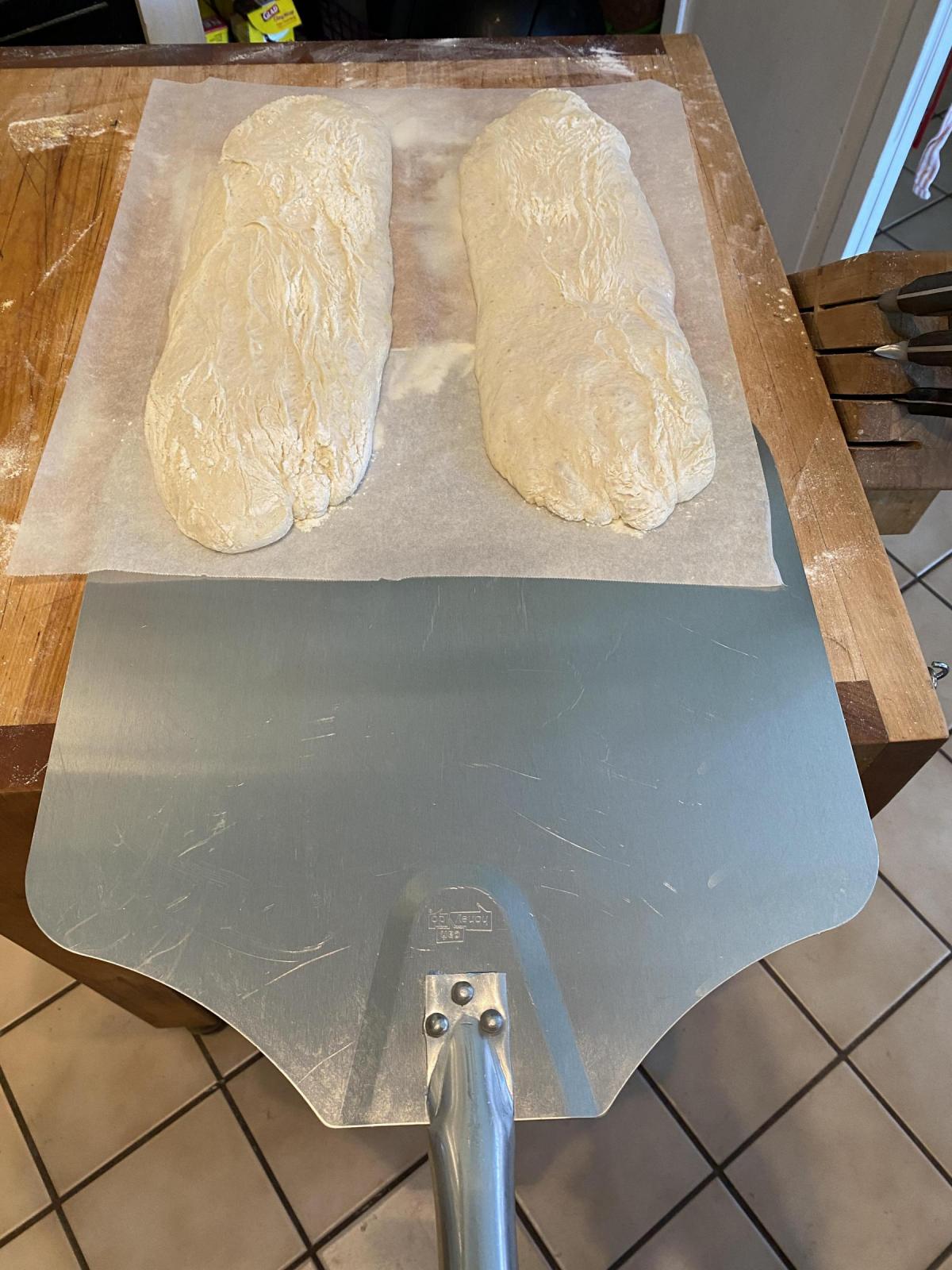 Slide onto your steel/stone, pour hot water into your steamer pan and drop the oven temp to 500 deg. 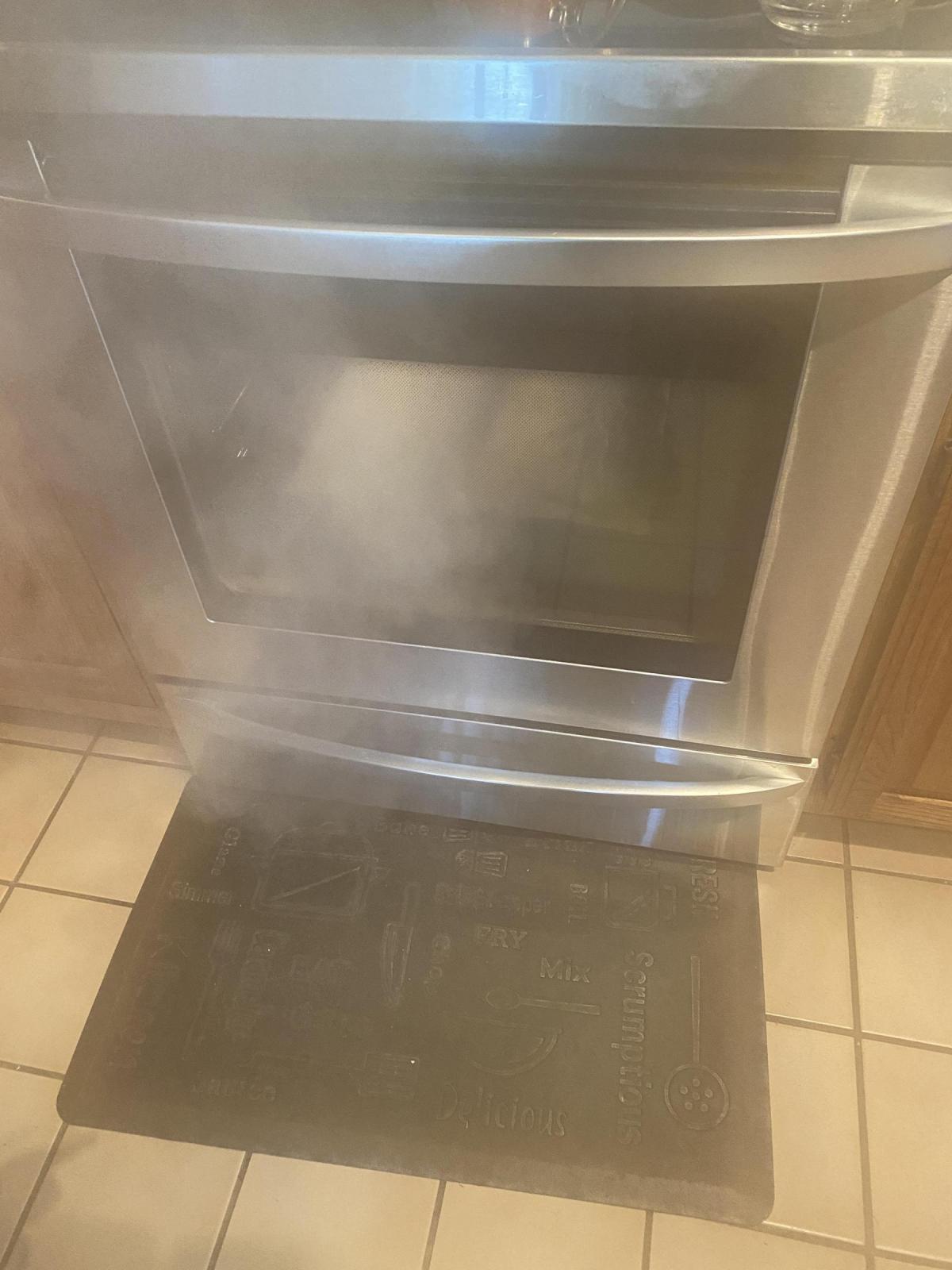 After 10 minutes, open the door, rotate the loafs 180 degrees, (I use a couple of gloves and handle the loafs directly, it's faster), drop the temp down to 450 degrees and give it another 10 minutes ish.

Put on a rack and cool. 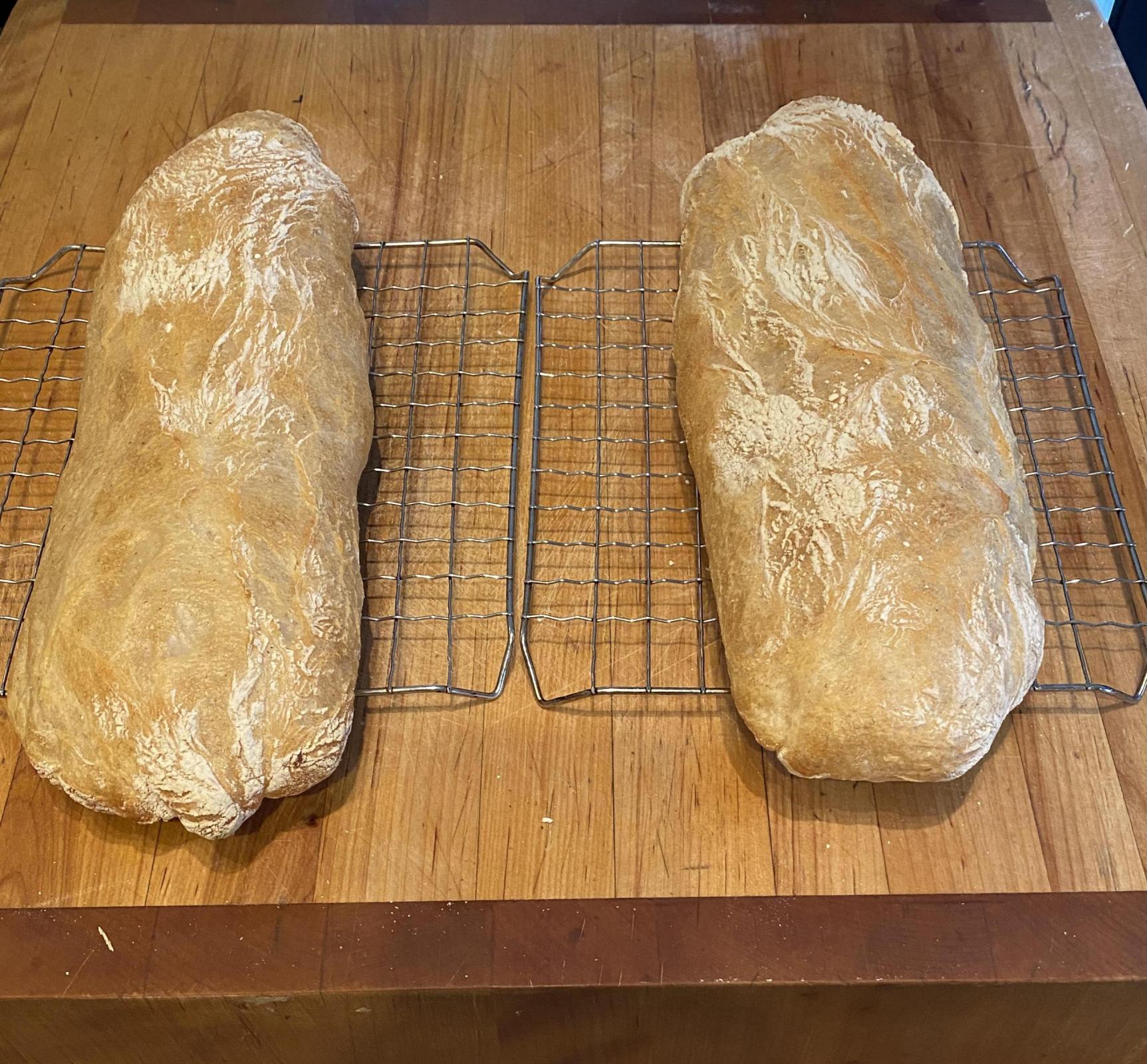 Cool and Slice to serve. 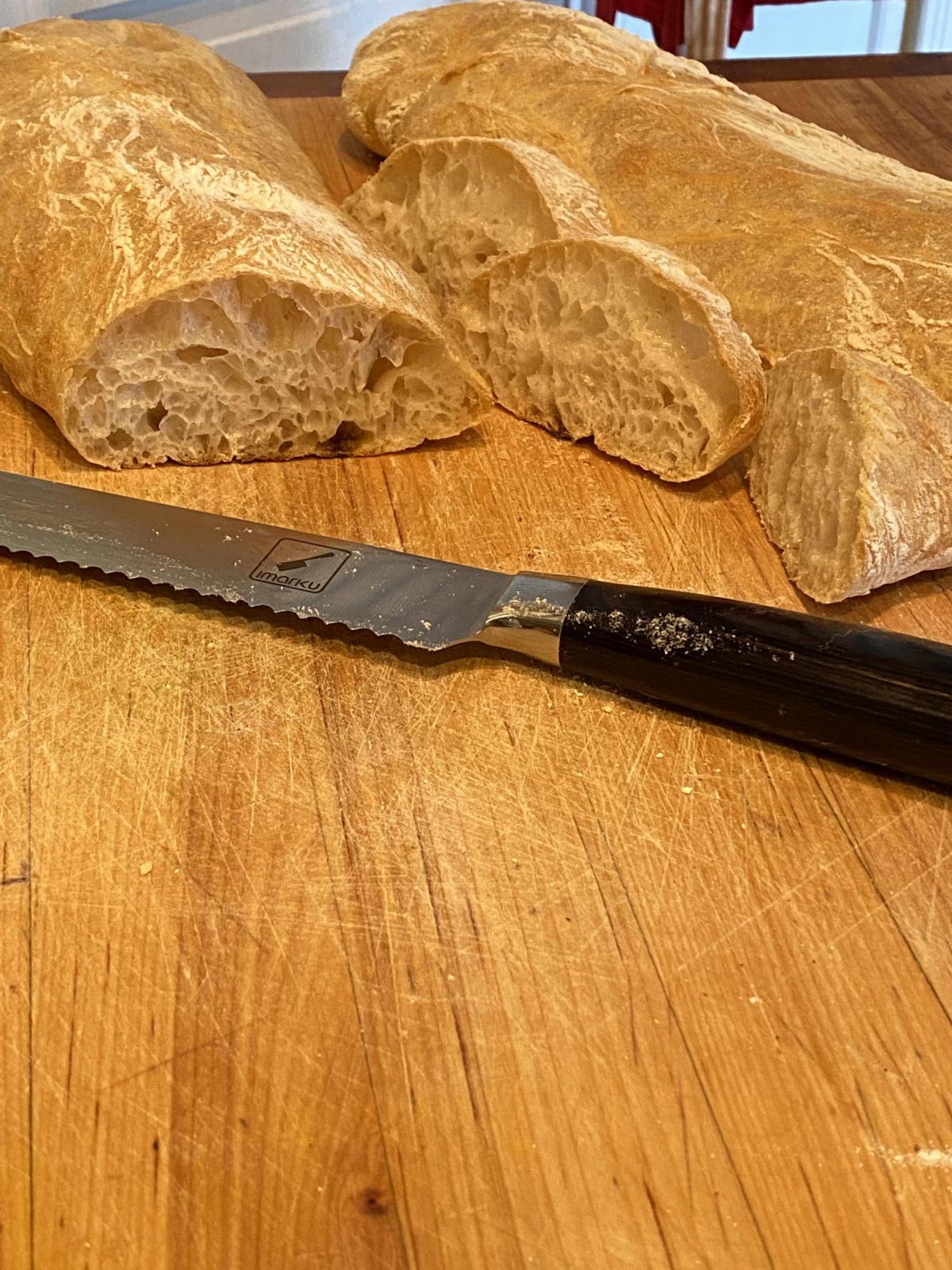 Hope you enjoy this, I certainly do. :)

Very nice way to use up your discard, if you have any.  Gorgeous crumb on those ciabattas, thanks for sharing your detailed processes.

Hi Praise coming from you Benny, Thanks!

Love the work you put into your blogs. It's inspiring.

Thank you, that is kind of you to say.

You should keep posting your bakes, you really did a great job documenting your steps for these wonderful ciabattas.  I still haven’t made a good ciabatta, I really need to give it another try.

PJ, was the 100g flour and 100g water (in the levain) part of the total flour and total water?

Your method is interesting. A couple other qusetions

Sorry about the late reply Dan,

I’ve used acidic discard and new discard, prefer the acidic, but both were good.

I’m not an experienced baker, I just enjoy eating. The texture was a light crispy crust, but not one that hurts your mouth, more of a pleasant crisp. Flavor was smooth with a very slight leaven earthy taste and the texture was a soft, chewy crumb.

PJ, I baked your bread. I made a few adjustments, the main one being 86% hydration because All Purpose flour was used instead of Bread Flour.

Your description of your bread describes mine to a “T”. A thin semi-crackly crust and a soft creamy and springy crumb. The flavor very nice.

The bread was quick to bake from initial mix to the baked loaf, not counting the overnight ferment of the levain. The sd levain seems to have added a very nice texture and flavor. If I bake it again, the % of yeast will probably be dropped to ~0.35% to increase to fermentation time in order to give the bread an even more complex flavor. This is a very nice formula. Thanks for sharing… 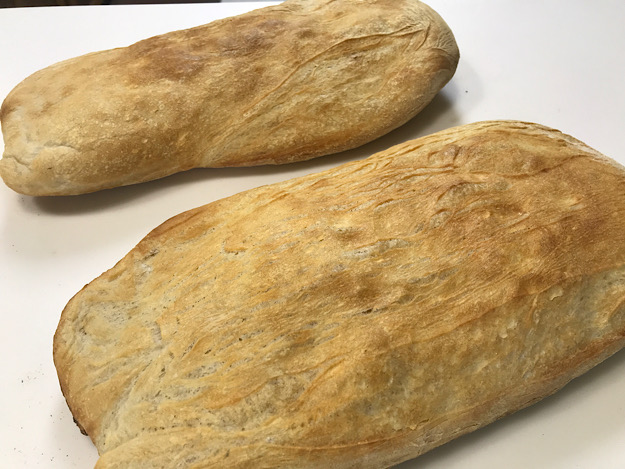 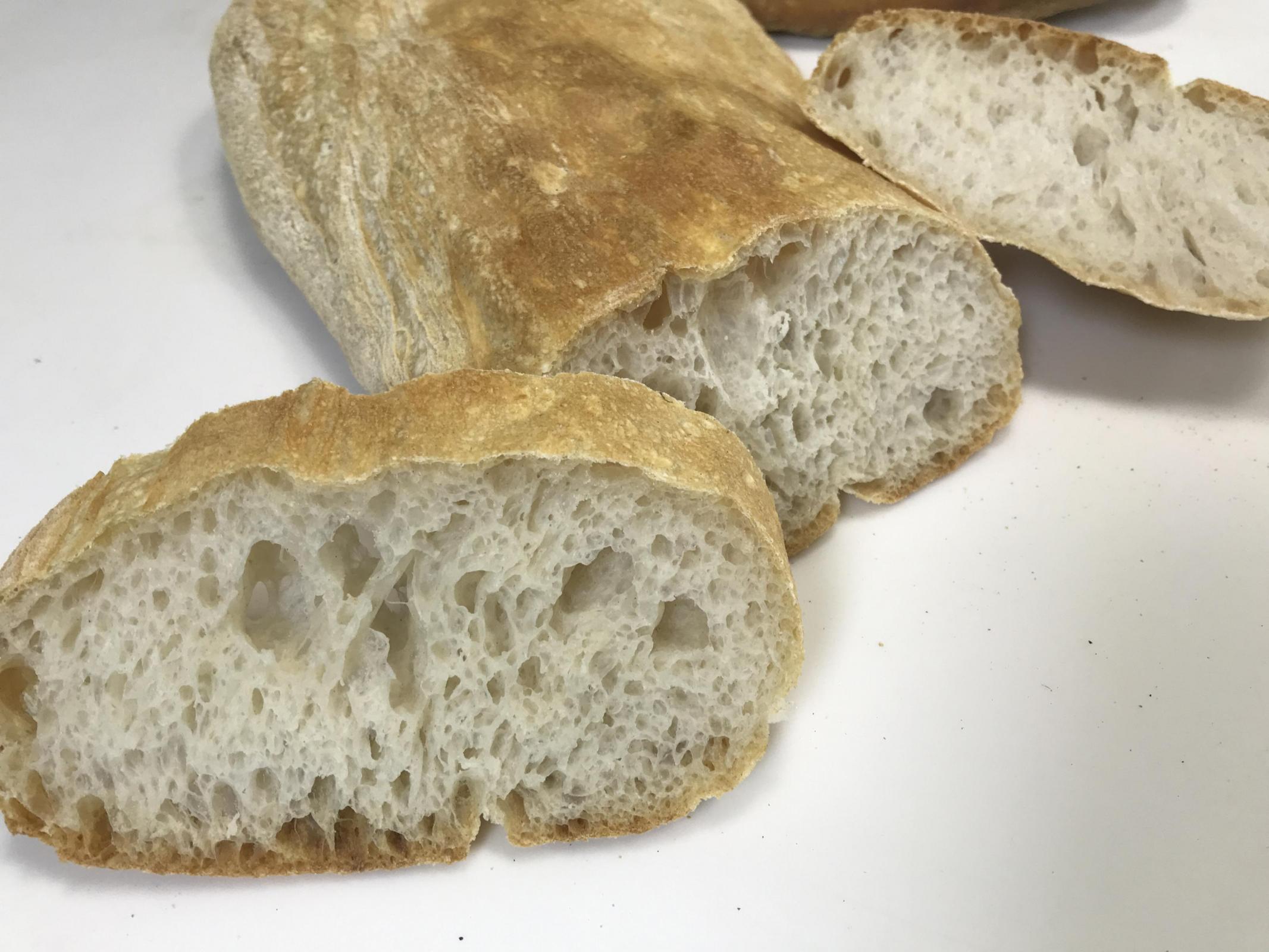 Since I am not a fan of large holes in the crumb, the dough received 2 aggressive sets of letter folds after the BF was complete. In spite of this some large holes remained.

Trying your changes this week. Thank you for the kind words.

Did you have any whole-grain, especially rye, in your discard starter when you made this? Or all white? I do, about 1/3 is whole grain rye and the rest high extraction bread flour, in the current discard pile (part of which was refreshed yesterday and part refreshed today), both locally milled and aged a bit. I used KABF for the unfermented flour. I’m wondering if that’s why it wasn’t balling on the paddle. I could see gluten strands and some curvature, some development — did not want to go too far. Could not switch to the dough hook. I mixed it with a silicone flexible spatula in the bowl just to get a feel for it at the end and tried to pull a window pane. It definitely seemed somewhat developed, extensible to a point, a little elastic, not pulling a window pane. I know if I kept mixing it would have broken down because I could see the gluten strands pulling with the fast mixing.

Greetings Arugula!  I know this is a late reply, but I wanted to comment since I've made this recipe twice now.  I've used mixed starter discards both times--about 1/3 whole wheat starter and 2/3 AP starter discards, without issue.  I most recently utilized tipo 00 flour instead of bread flour since I had some I needed to use up, although I think bread flour provides a little more structure to the final loaves.  I plan on trying bread flour next time since the loaves seem to spread a little more than those pictured in the recipe.  That being said, I think ciabatta is typically more flat so I just might need to adjust my expectations.

To your question: Both times, I have had to add approximately 50 to 75g more flour to get this dough to come anywhere near close to pulling away from the sides of the mixing bowl and/or balling up.  The extra flour is added very slowly, just a tablespoon or so at a time until it comes together a bit.  I utilize a spiral dough hook for the largest portion of the kneading, which results in a soft, supple though wet dough when done.  Olive oil on the hands and scraper helps with transferring this to the greased bowl.  You might just need to add a bit more flour...?

It's a nice recipe that might need tweaking to individual kitchens, temperatures, flours, etc (which is normal for most recipes/formulas posted here).  I'm happy to have found a way to use up my starter discard immediately after doing starter refreshes prior to my regular baking on the weekend.  Going to try the discard starter cracker recipe that was posted about a month ago too...looks like another great way to put it to use rather than having it accumulate in my fridge ;-)