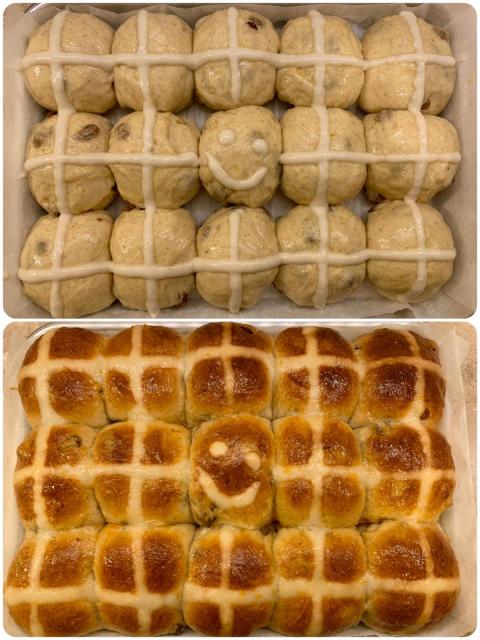 My stiff starter Etno (50% hydration) got a refresh today after being chilled for over a week so I mixed its discard with ingredients for hot cross buns. I figured I’ll just jot down the weights as I mixed them. The dough was rather sticky but manageable. Think I should reduce a lil bit of milk the next time I make these.

Egg wash before baking. Then, apricot jam glaze after.

The happy face gave me a nice chuckle this morning. Thank you!

I do have a question,though. What texture did your "crosses" have after they were baked. One year I made a similar flour/water/sugar paste and after the buns were baked the cross was leathery and chewy.

I haven't made that since-I just make the cross out of powder sugar/water/butter and apply after the bake as a cross of frosting. Today, I have just reviewed a recipe that makes a custard and applies it after 10 minutes of baking (dough is light brown, set but not fully baked). Then the rolls with the applied custard are baked about 10 more minutes. Seems a bit fussy but more traditional.

.. and the mixing bit. I used a similar ratio of 1 water to 1 flour with 1/2 the sugar before, but I stirred them too vigorously resulting in a very thick paste that was kinda hard to pipe. I guessed gluten must have formed too much from the stirring. Those lines baked into almost biscuit-like texture and broke easily when pulling the buns apart.

The paste for the current buns were mixed slowly until just combined. They stayed soft with a light sweetness. Maybe the oil in it or the apricot glaze helped keep it soft.

Another topping that I’ve used before that stays soft:

I’ve yet to try a custard topping. I’d be piping them before baking for sure. Too lazy to break the bake cycle. ?

Love the middle one - the friendly one surrounded by the "cross" buns.

Very nice and the center one is also my favorite.  Great way to use up your discard.