Outside the comfort zone CB

Outside the comfort zone CB

Wouldn't say it is very far outside my comfort zone, but still - as far as I remember, this is the first time I managed a loaf with high % spelt that didn't turn into a pancake a bit. Almost 40% spelt (just all I had left), total 60% whole grain - also unusually high for me, I rarely go above 40%. Also used some old stiff wheat starter (wanted to use it for another bake, and decided instead of discarding just to use it), and added a little fresh rye starter to ensure fermentation moves along. Here is the approximate formula (was adding things and weighing, and wrote down afterwards, so hope I didn't mix up any numbers): https://fgbc.dk/1ftc

Just mixed everything without any autolyse, did some slap&folds until partial development, then did some folds in the first couple of hours, and left to ferment. Perhaps because of high whole grain %, and addition of diastatic malt, bulk was done within 6 hours (total from mixing) despite low inoculation (<5% PFF). I kept it warm too. Might have been just a little overfermented even: was OK to shape, but just a tad more sticky than I expected. Coated in sesame seeds and retarded overnight. Baked covered for 20 min at 250C, uncovered until I liked the colour at 230C with convection (~15 min). 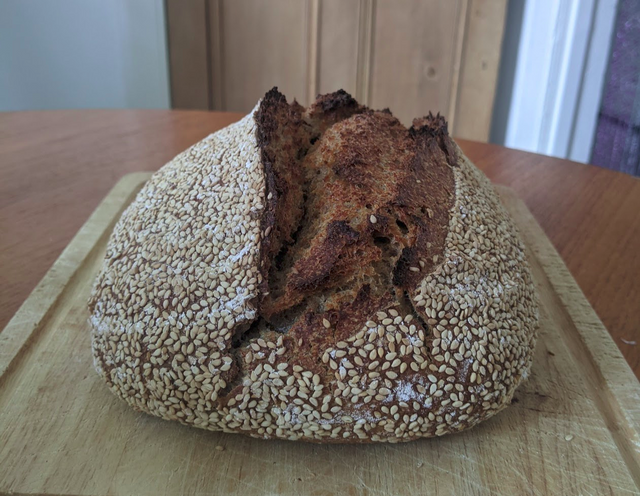 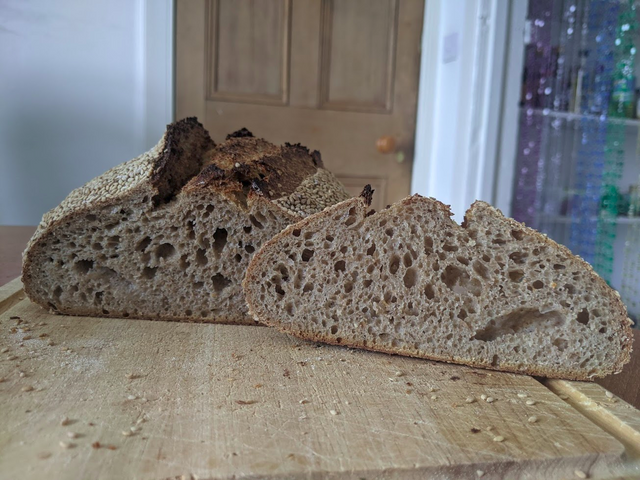 Not the tallest loaf, but I am very pleasantly surprised with the crumb for such high % whole grain! Don't often get it this open even for more typical for me formulas. Flavour is unsurprisingly very pronounces, but not overpowering. Sesame seeds as usual provide nice contrast.