Bake from a couple days ago...

Overall, bake turned out decent.  Made the loaf for a friend and they liked it, so I guess that’s all that matters.  Had to slice and check the crumb before giving it to them. ?

Levain build went well.  Starter was 2 weeks old, but levain was over doubled and very bubbly at 11 hours (72-74 deg).  Dough temp was right on target after mixing (as 75 deg).  However, as usual for me with high white flour recipes, my BF progressed very slowly.

I moved to shaping after 6.5 hours.  Aliquot was just over 50% and dough was reasonably jiggly.  I wanted to go longer, but it was getting late.  Dough had risen some after 90 minutes (aliquot about 70%), so put it in the fridge for a morning bake.

Dough shrank a bit over night.  Luckily, I got good oven spring and the crumb turned out OK.  A little underproofed, but not too bad.  Surprisingly, it had mild acidity with the longer fermentation according to my friend.  They enjoyed the first slice with a bowl of soup.  Maybe because of the higher temps during BF. 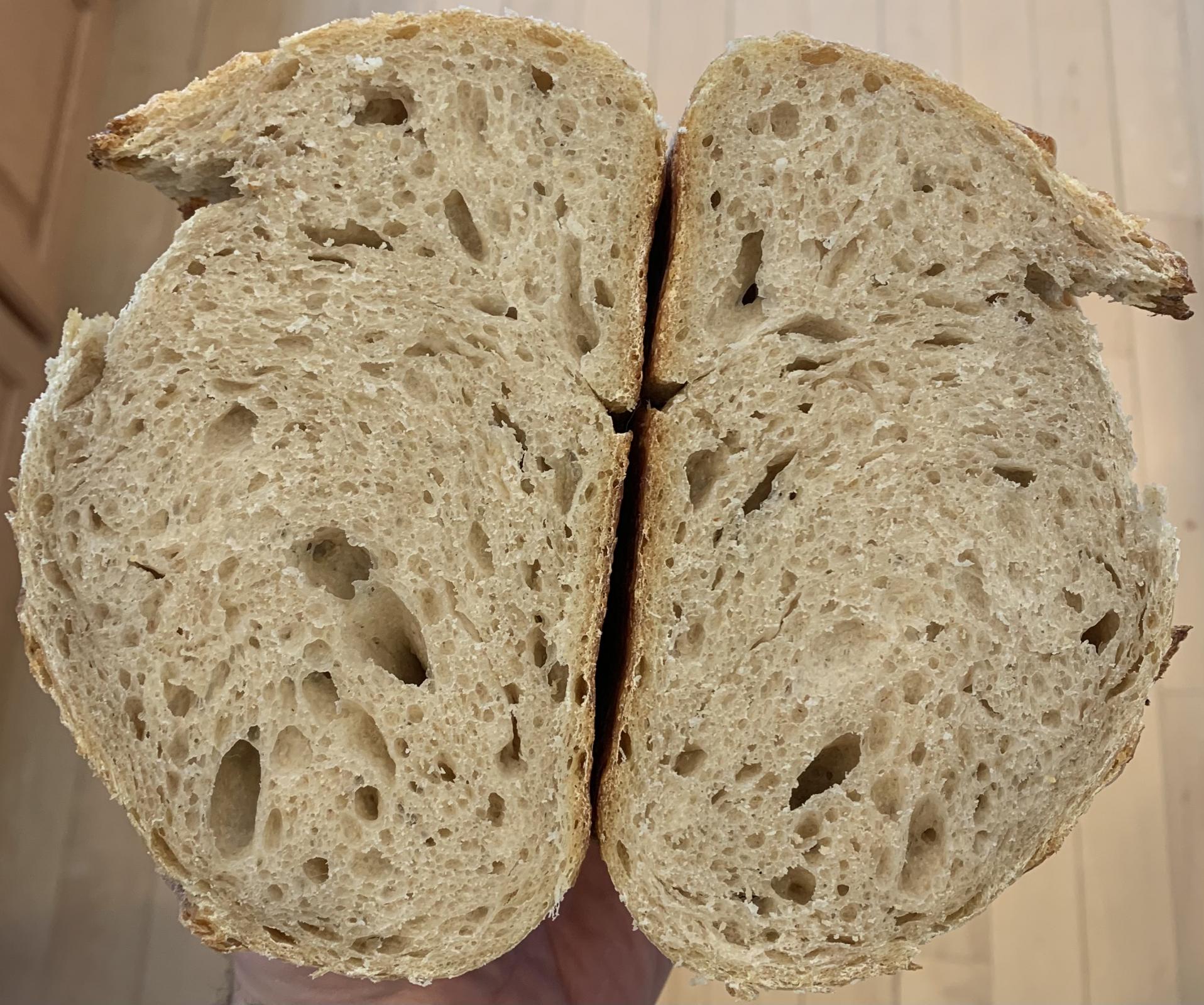 Troy, when you consider how new you are to sourdough and how young your starter is, you really have done extremely well.  Honestly, I’m not exaggerating, I’m really impressed.  I wasn’t getting ears or decent crumb for many many months of trying.  You’ve already baked a great loaf here.

You call is underproofed, I don’t actually think it is underproofed.  If you wanted a more open crumb, then yes you could proof longer to try to achieve that, but really that is a great loaf.

Thank you very much for the kind words Benny.  And...  Truly appreciate your perspective.  You are right...  It was a good bake, and I am happy that I'm getting some consistency in them.  I just need to figure out why any recipes that use a high percentage of white flour and include a white flour levain always take so long for BF.  I think I could have proofed to where I wanted with another 60-90 minutes, but I ran out of daylight.  :-)

Think I might take the rye starter and create a white starter over a couple builds next time to get the organisms used to munching on that flour type.  It's the only thing I can think of...

...ran out of daylight.  You could have put your dough in the fridge and taken it out again in the morning for a bit more fermentation if that happens again.

Is your starter fed whole rye Troy?  The reason I ask is that when I used to feed my starter red fife, it could never make a great strong fast white levain.  I have no idea why, but it just couldn’t.  A white levain would barely rise to 2x.  Then I switched to whole rye and now that starter can make any levain and one that has power to make levains that rise 3-4 x reliably.

How does your starter behave when fed?  What is your feeding schedule and ratio?  How do your levain builds rise?

Thought about putting it in the refrigerator to extend BF, but haven't done that before and didn't know how long it would take for things to warm up and start fermenting again.  My schedule the next day required a morning bake, so didn't want to risk it.

I followed the levain recipe per Hamelman ratios except dropped to 110% hydration (whole rye starter from refrigerator for inoculation), and it progressed well.  Was starting to see good bubble formation and rise at about 5 hours.  Stirred it down.  Recipe calls for 12-16 hours at 70-72 deg.  At 11 hours, levain was doubled (even though high hydration levain) and looked like it was just starting to recede, so I moved to mix.  This is normal for me though.  The levain build always goes well.  It just really seems to stall and BF goes much slower than the method calls for.  I know there will be some adjustment of time versus the author's method, but 2-2.5 hours (method) versus 6.5+ hours is what I can't figure out.  Maybe this isn't that far off.

It's only the levain builds with white flour that get me.  Recipes with an overnight BF with small inoculation go as expected (even white flour recipes).  I've also had "success" with a 100% WW recipe that uses a 100% WW levain.  It's the second build with high white flour recipes that seem to deviate a lot from the author's method.

The only thing I can think of is that your starter might not be quite at peak when you refrigerate it, is that a possibility?  My rye starter will more than double at 1:6:6 ratio at 74ºF in 8-9 hours, usually 3-4 x rise.

The other thing I wonder is that your starter is still kinda new.  You can try to strengthen it by leaving it out on the counter and feeding it for a few days, say 3-4 and see if you can get it stronger.

Quite possible that it's not at peak when I refrigerate it.  Still trying to get a feel on that timing.  Don't want to refrigerate it with no food left, but also want to make sure it's mature.  I would say I've been erring on the "put in in the refrigerator early" side of that balance.

I leave mine out until I’m sure it has peaked and sometimes it goes past peak, but in that state I know that the microbes are maximally densely populating the starter.  Once the starter is down to 3ºC it is totally fine for a week without feeding.  I’m guessing you might be putting it in the fridge with too much food in the starter and not enough microbe density.

Tomorrow is the weekly refresh day, so I'll start tomorrow and give that a try for a few weeks to see if it makes a difference.

The microbes won’t suddenly die when they’re out of food if placed in the fridge for a week, they’ll be fine.

This is pretty much my go to sourdough recipe with some alterations suggested by David Snyder's San Joaquin sourdough recipe for the timing of various steps.  I use the Hammelman recipe with an overnight refrigerator retardation after the bulk fermentation.  It come out of the fridge the next morning.  I usually have 1000g of dough that gets divided in two batches for batards.  These sit on the bench for 45-60 minutes depending on the room temperature and then get shaped and allowed a final rising on a linen couche before baking.   The openess of the crumb is variable but I'm more concerned with the taste!

I keep my starter in the fridge and do a couple of feedings of a portion of it before preparing the final starter so I know it's potent enough.